It’s already hard to be part of the club of true main battle tank manufacturers (neither licence producer nor assembler). Turkey showed its own Altay, partly based on the South Korean K2, but in South America, only Argentina and Brazil went as far as to produce their own model. The Brazilian T1 project was certainly the most ambitious of them all, and started in 1982 as a privately funded venture by Engesa.

It was a risky plan, justified then by the company’s own large exports successes of armoured cars, like the Jararaca, Urutu, and Cascavel. The company back then seemed more wealthy than ever. Its products had an excellent reputation, being relatively cheap, reliable and simple to maintain. The company's own ingenious boomerang suspension system had helped to extend the life of otherwise old kits to unsuspected lengths. By the mid-1980s Engesa represented a 5,000 crew company with twelve subsidiaries.

In 1983, Bernardini (already responsible for the X1A1/A2 Stuart conversions in the 1980s) embarked in the MB-3 Tamoyo MBT project, later suffering the same fate. For the first time Engesa formulated the wish to develop its own project, solely for export. It was an ambitious endeavor, a fully fledged national main battle tank, motivated by the opportunity of the open Saudi Arabian market. Engesa at that time was well known and present in the Middle East. Saudi's specification asked for the replacement of its ageing AMX-30s, and the Saudis seemed interested by the German Leopard 2. However the German Government was opposed to any sell outside NATO, and the market was found open to other competitors, like Engesa. At first the company searched for an industrial partnership with Tyssen-Henschel in Germany, and later Porsche, but again the German government intervened and any cooperation project was halted. Although the Brazilian Army could have been interested, there were two major specifications that clashed with Engesa's project: First the weight was not to be higher than 35 tons, second, because of railway transport specs, width was to be contained within 3,20 m. Eventually Engesa's design focused on the more realistic second specification. It was decided to concentrate on a chassis mated with two turrets by Vickers Defence Systems for different gun tests (British Vickers rifled 105 and smoothbore Rheinmetall 120 mm).

The great originality of the Osorio and its highest merit was that it was not based on an existing chassis. Its configuration was classic, with a well sloped glacis, left hand side driver with sliding hatch, three periscopes (central Passive Thermal Imaging one), and there was a modular construction with an inner steel hull (thickness unknown) and composite blocks. Nothing precise is known about these but they integrated Bimetal, Composite and Laminate materials. The central fighting compartment house the commander, gunner and loader in a three-man turret, also surrounded by composite blocks.

The rear compartment was originally tailor-made for a German MTU diesel, but due to its price the choice was reported on the MWM 1,000 hp diesel TBD 234 turbo charged diesel engine, coupled with a ZF LSG 3000 transmission. Both were already operating in Brazil. There was even a 1000 km crash course in Saudi Arabia and the engine proved up to the task. The hydro pneumatic suspension was similar to the one used by the British Challenger, designed by Dunlop. Rubber side skirts were added to protect the drivetrain that comprised six doubled roadwheels of small diameter, and five return rollers. 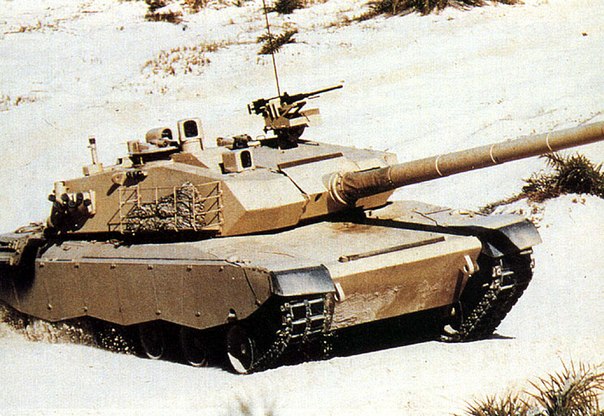 120 mm GIAT prototype, in desert tan for the Saudi contract

The Osorio featured a laser rangefinder, thermal imaging sight with magnification for the gunner stabilized by SFIM, 6-periscopes cupola for the commander with its own IR sight, plus a modern Fire Control System with a laser range finder and digital ballistic computer. The first armament as designed (first prototype of 1985) was the British L7 rifled 105 mm gun, a standard that was to greatly help exports due to its large availability worldwide and wide choice of ammunitions. The next year, in 1986, it was replaced by the 120 mm GIAT smooth-bore gun, as the licence for Rheinmetall was again, blocked by the German government. The same gun is shared by the French Leclerc MBT. The gun was fully stabilized, with a -10 to 20 degree elevation, 11-15 º/s max. slew rate. 40 rounds were carried (ready rounds, and other stored in the turret basket) of the APDSFS-T and HEAT-MP type. Secondary armament comprised the roof-mounted M2HB/12.7 heavy machine gun (1500 m range) and a coaxial Hughes X34/7.62 machine gun. Ammo supplies were 600 and 5,000 rounds respectively. For active protection the turret was given two banks of three electrically-operated smoke dichargers.

Saudi Arabia gave the go-ahead for the development and R&D phase that cost US$100 million. But the final order dragged on. In August 1989 the Saudi Government announced an order for 318 Osorios (renamed Al Fahd, Lion Of The Desert) worth US$7.2 billion. But the contract was never signed eventually. In the meantime, the Brazilian Army was somewhat interested, but orders were conditioned to export successes, as to decrease the unit price and avoid paying soaring development costs. In fact political events just turned out badly for the company at the worst time. An interesting proposition compared to the M1 Abrams, Challenger or AMX-40 also tested by Saudi Arabia for its new contract, the Osorio emerged as a winner in September 1989. But decision was taken instead in secrecy to purchase the M1 Abrams, just as Iraq invaded neighboring Kuwait in 1990. The failure of any export sells also prevented the Brazilian Army to adopt it and the weight of the whole program plunged the company into Bankruptcy. 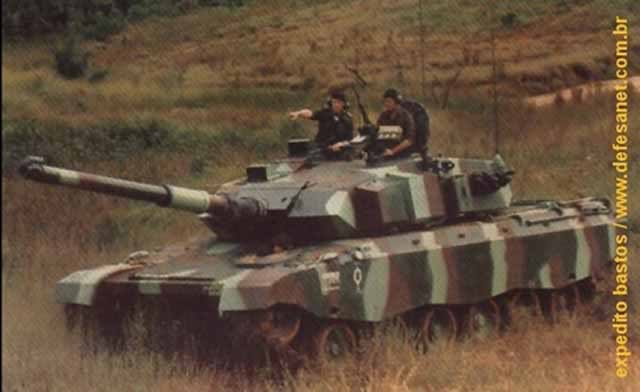 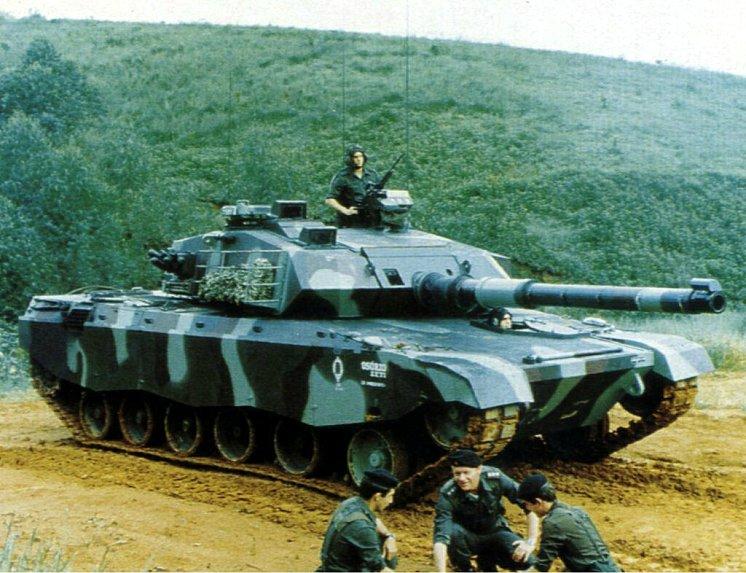 Another livery of the 1985 prototype 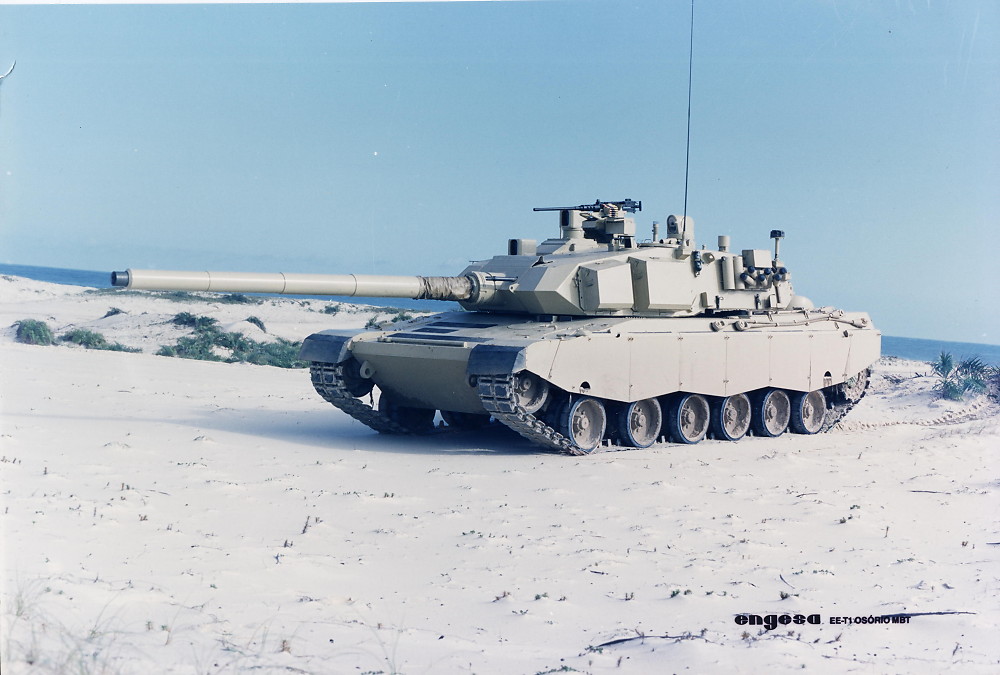 120 mm GIAT prototype, in desert trials. In a what if scenario these would have been named "Al Fahd" MBTs. Official Engesa photo for export.