A stopgap before the Arjun

The Indian domestic tank program was stated already in the 1950s with the local assembly of the British Vickers Medium MBT, called locally the Vijayanta. Of the same generation as the Centurion, also used by India, both soldiered in the 1965 and 1971 war with Pakistan. However it was clear after the latter that these tanks were now obsolescent and needed replacement. The 1972 program was ambitious, planning the development over little more than five years, of a 100% brand new Indian main battle tank. However the development made by DRDO's CVRDE lab soon ran into multiple delays and underfunding. In 1977 it was evaluated that the new tank was nowhere near the end of its development cycle and time was running out. A year after, the government decided to find a stopgap tank, also to be built in India. France and the United Kingdom were contacted.

The Indian MoD decided to acquire new-generation models and started at first paper evaluations of the firepower and mobility characteristics for the two models offered, still not yet produced.

These were on one side the AMX-40 (GIAT Industries) in France and Chieftain 800 from Royal Ordnance Factories (British Aerospace PLC. The first one was further developed into the AMX-56 (Leclerc) in 1990 while the second was further developed into the Challenger 1. The Indian Army assessed their differences, pointing out the 43-tonne AMX-40 was perhaps the best of the two, at least from the drawing board, with its powerful French Poyaud V12X 12-cylinder diesel engine and German RNEK LSG-3000 transmission. It offered a much greater power-to-weight ratio at 25.6 hp/tonne and a comparable 120 mm smoothbore cannon. However its protection was weak for the standards of the decade. The Britihs Chieftain was much slower with a defavourable weight ratio, but had the excellent improved Chobham protection.

While the Indian MOD was still debating, elections saw Indian Prime Minister Indira Gandhi asking for a revision of these evaluations and, reflecting a rapproechement with the USSR, ordered to include a model from the USSR. Jumping on the occasion, the Soviet Union's Ministry of Foreign Economic Relations (after 1991 Oboronexport and later Rosoboronexport) made a formal offer to India's MoD for supplying their 37-tonne T-72M Ob'yekt 172M-E4 still now in post-development for export, off-the-shelf. The agreement was secured by a approval for license-production of the larger and more advanced, 41.5-tonne T-72M-1982 Ob'yekt 172M-E6. The latter was to be built locally at the state-owned Heavy Vehicles Factory (HVF) in Avadi.

Design of the Ajeya

Basically similar to the T-72M1. No Indian change but gradual replacement of some subsystems by Indian ones. Armament: It has the same 125 mm 2A46 smoothbore tank gun but a secondary armament similar to the T-72A, comprising a 7.62 mm caliber PKT coaxial MG (right of the gun) with 250 rounds of ready ammunition. The roof-mounted 12.7 mm caliber NSV heavy machine gun as a revised installation. It is installed on the commander's cupola.

-Ajeya MK2 – Indian version of the T-72M1 with ERA and banks of 6 smoke grenade-launchers on each side.

-Tank EX – Indian integration of the Arjun turret onto the T-72 hull, Prototype only. Did not enter production as it was rejected by the Indian Army.

The "Combat Improved Ajeya" or "CI Ajeya" came after a first wish not to modernize its T-72 tanks until the Arjun was in service and replace it gradually. However, the Arjun multiple delays and cost overrun meant "Operation Rhino" was declared by the MoD in 2001. The plan was to have some 1,500 T-72M1 refusrbished and modernized. So for this, in 2002, India purchased 250 Polish SKO-1T* Fire Control Systems. They are the same as used by the Poish-designed PT-91 with a modern thermal imaging sight. This purchase was linked to India being apparently unable to secure a licence to built locally this modern FCS. The Polish SKO-1T DRAWA-T fire control system and thermal imager supplied by PCO/Cenzin was developed for the PT-91 Twardy, based on the Polish-bult T-72M, ensuring maximal compatibility.

This CI Ajeya was also to receive the new ERA Mark II protection system developed by DRDO, coupled with a locally-built fire detection & suppression system, fitted inside the crew compartment. Equally, new 81 mm smoke grenade launchers, with a modern firing system were mounted on the turret sides. Also a GPS was provided for easier tactical navigation, developed by Israeli company Tamam. Also in addition, the turrets received a German Litef or South African RDI laser illumination warning system installed on either side of the turret. Tadiran and Marconi GS were contacted to deliver new radio sets. The Thermal Imaging Stand-Alone Sights or TISAS developed by DRDO since has been mounted in some of these Ajeya CI with the objective of a full replacement of al Polish-built systems in the 2020s.

The second great innovation, in part to compensate for al the modern equipments installed, was the engine compartment fitted with a 1,000 hp (750 kW) S-1000 engine at first developed by PZL-Wola, also developed for the PT-91 Twardy. At the time this plan was announced, Indian sources stated that between 1,800–2,000 T-72M1 would be ultimately converted, remaining batch undergoing partial improvements. Later it was announced this engine would be replaced by the Indian V92S2 high power diesel already fitted in the T-90 Bhisma. The Polish engine from PZL-Wola is still considered an option.

The third innovation should be the announcement of a new, modernized 125 mm smoothbore gun with improved missile firing capability. Like for the T-90 Bhisma, it will be able to fire a laser-guided anti-tank missile developed by DRDO. Its range as communicated after trials is 5 kilometers. Tests were performed on 22 September and 1 October 2020.

BY mid-2011 in press release, the Indian MoD defence spokesman stated that 250 T72M Ajeya had been upgraded to this new CI Ajeya standard. Field trials were performed with the help of Russian scientists at the Jaisalmer’s Lathi prving ground and field firing range, but so far no more detailes are available. As of today, the V-46-6 will powered the upgraded T-72 Ajeya and the V92S2 the T-90 Bhishma. 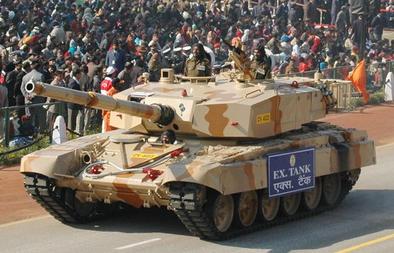 Tank Ex in parade. So far only 8 prototypes has been delivered.

Future of the Ajeya

The CI Ajeya programme when launched has been announced to prolongate the active life of the T-72M Ajeya to about twenty years, so around 2030 to 2040 giving the scale of conversion. So far, the Indian T-72 Ajeya tanks are considered to be effective and had the occasion to show their abilities during the India China border standoff: The Indian Army deployed at this occasion some T-72 Ajeya in Ladakh. Their Russian origin meant they are well suited to cold climates, so their combat readiness and availability is flawless. In addition, India has announced in 2019 it was looking for a mountai tank, like the Chinese Type 15. The T-72 is relatively light and could perform thos role, before a new indigineous design is found.