Designed to counter the T-62

At the origin, the Type 61 was just entering production when the Army requested as soon as 1962 a new design, having recently saw intelligence reports about the capabilities of the new Soviet T-62. Mitsubishi Heavy Industries integrated in its preliminary design many features from western tanks, among which the controllable suspensions of the future joint US/West German MBT-70, the hull of the Leopard I, some influences in turret design and a remote-controlled anti-aircraft machine gun from the M60, and NATO's standard Royal Ordnance L7 105 mm rifled gun. The keep the turret low, the design requested an autoloader, and the commander was given a new rotatable cupola. The Type 74 (74式戦車 nana-yon-shiki-sensha) was born. 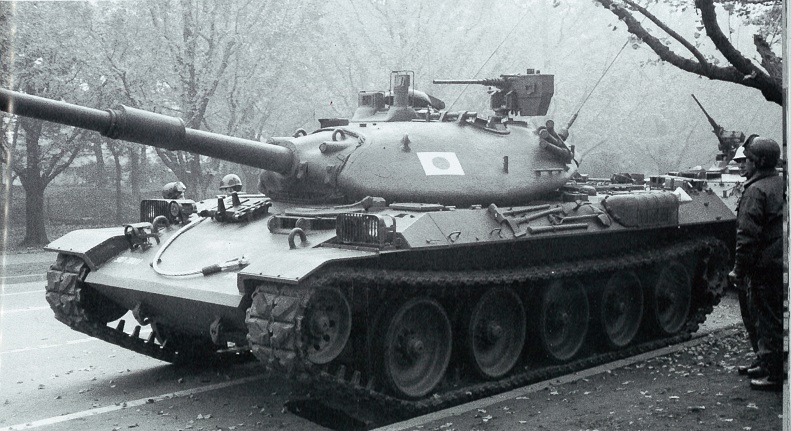 One of the STB prototype vehicles.

First trials started in 1964 and lasted until 1967. The STB-1 was the final production prototype in 1968. It appeared that the autoloader was still too complicated to operate, to maintain and was not reliable. It was eliminated, as well as the remote-controlled AA gun. The turret shape was elongated to compensate for the extra loader. Eventually, the STB-3 resulting of these modifications was delivered in 1971, and after further tests and modifications, the STB-6 in 1973, which was considered as the final production prototype. It was approved for service this year but production only started in September 1975. 225 were delivered until January 1980, then the series was modified several times, from the Mod.B to the Mod.G/Kai. It ended in 1989 as 898 units had been delivered. By that time it was estimated already obsolete, as in 1973 the Soviet T-72 was unveiled.

The hull composed of RHA panels was welded, with sloped sides, with an equivalent of 189–195 mm (7.4–7.7 in) on the strongest part, like the glacis and turret front. The hull accused a characteristic step over the rear engine compartment. The driver was located on the left, with three JM17 Mod 2 periscopes and a single piece hatch. Two sets of headlight, signals and blackout lamps were installed on each of the mudguards, encased in a protective frame. Tooling, storage boxes and equipment were fastened to the sides slopes, and others on the turret basket. 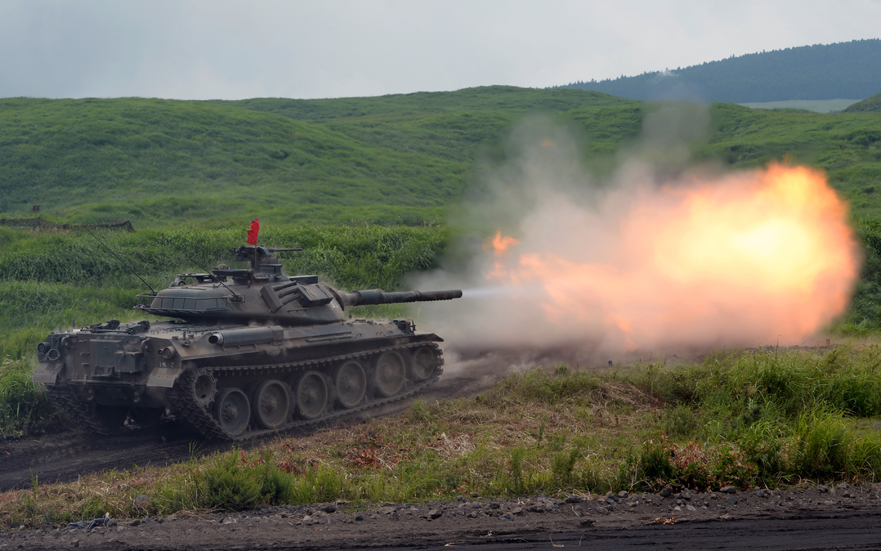 The turret was cast, low and wide, with a characteristic turtleback shape, round at the front but narrow at the rear. The mantlet was partly internal (shaped as the front part of the turret). The loader's single piece hatch was at the turret's center left, and the commander rotatable cupola (with six vision blocks) to the right, further at the rear. The gunner was just behind. The ring mount for an external M2HB cal.50 heavy MG was installed. Both had periscopes, later upgraded with infrared thermal sights. The main Royal Ordnance L7 (built under license by Japan Steel Works) had 55 rounds in store, the cal.50 MG, 660 rounds, and the coaxial Type 74 7.62-mm MG, 4,500 rounds. The main gun was fitted with a concentric recoil mechanism to allow more depression in a confined space. The suspensions counted New idlers, new drive sprockets (relocated at the rear), and new larger paired rubberized roadwheels which supported the upper tracks. The tracks were of the same standard design (central pin, grousers) also used by the Type 61 and US tanks in general. The Type 74's suspension is also hydropneumatic. This is seen as a “must-have” feature by Japanese strategic heads, given the Japanese countryside’s hilly, mountainous and generally rough nature. The suspension allows the tank to ride higher or lower depending on the terrain type, tilt left or right, or raise and lower the front or rear of the tank. This increases the elevation or depression angle of the gun, giving the ability to fire over a ridge line without presenting a target for an enemy vehicle. A similar suspension system was used by the Swedish on their Strv. 103 "S-Tank". 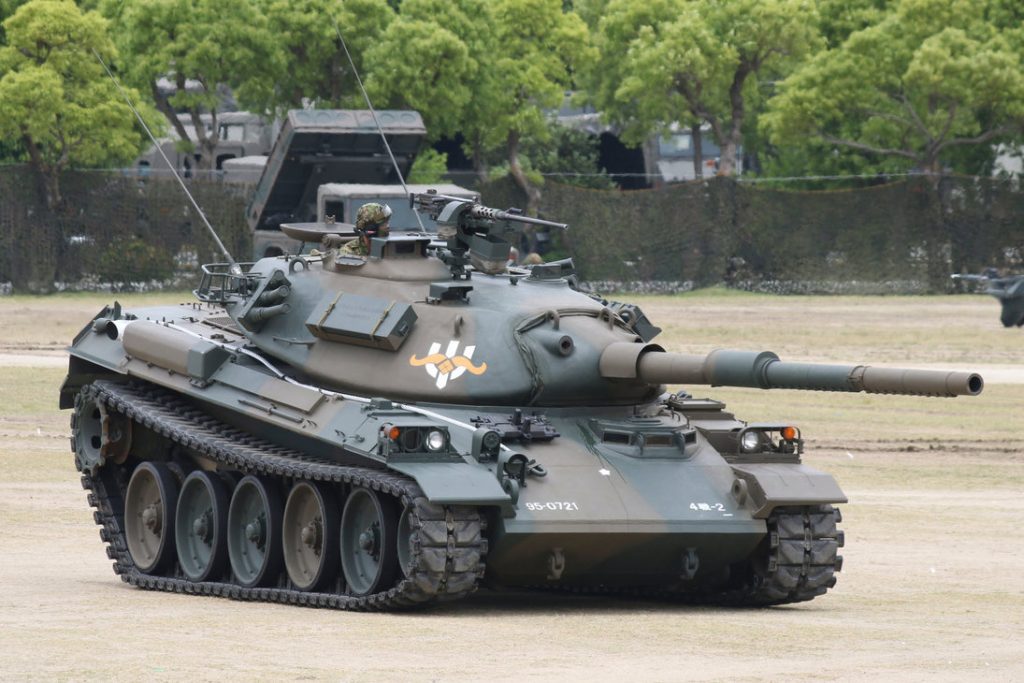 The Mitsubishi 10ZF Model 21, 10-cylinder two-stroke cycle diesel, 21.5 L, was capable of 750 hp (560 kW), driving a Power/weight of 19 hp/ton (same as the nimble French AMX-30), for a top speed of over 60 km/h. It was coupled to a Mitsubishi MT75 manual transmission. The exhaust pipes and silencers were mounted on the running boards to the rear of the hull, just behind the turret ring. The hull/turret was sealed off and treated NBC. It could be equipped with a snorkel to ford rivers to a depth of 3-4 meters.

Type 74 during maneuvers adorned with the JGSDF (Japanese Ground Self Defense Force) flag. 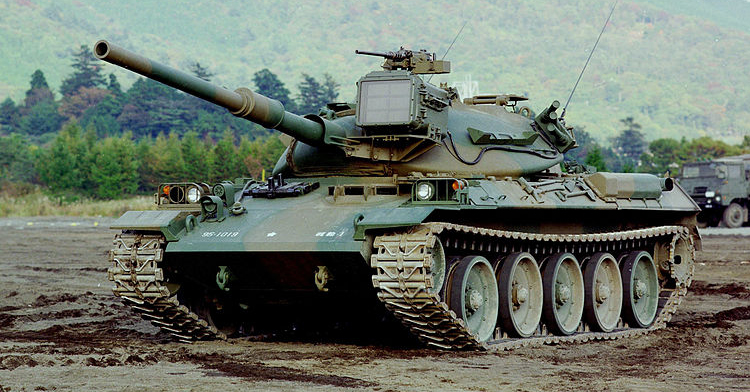 These comprised the mods A to F, which saw the adoption of infra-red imagers for the commander and gunner, integral laser rangefinder (with magnifications of x 1 and x 8) in front of the commander's cupola, and early on a target illuminator similar to the M60 type. The gunner FCS was upgraded with a digital fire control computer, which took range data from the commander's range finder. The ammunition carried comprised HEP, then APFSDS and HEAT-MP. The Mod G (Kai) added in the 1980s features from the new Type 90, like passive infrared camera, side skirts, and other improvements in electronics and FCS.

Three variants are currently derived from the Type 74's chassis: Type 78 Armoured Recovery vehicle: A Recovery vehicle variant with all armaments removed. The driver and commander share a compartment on the left of the chassis, with a large heavy lift crane on the right. The vehicle retains the Hydropneumatic suspension. Type 87 Self-Propelled Anti-Aircraft Gun: SPAAGs based on the German Flakpanzer Gepard. Armed with a license-built copy of the Oerlikon 35 mm twin cannon system, and equipped with radar assisted target acquisition. Full article can be found HERE. Type 91 Armoured vehicle-launched bridge: Exactly as the name suggests. An unarmored Type 74 chassis with the ability to carry a mobile bridge.

Due to the fact that the development of the Nana-Yon took 14 years, this second generation tank it was already obsolete on completion. It was due to be replaced by the third generation Type 90 Kyū-maru early on, but the end of the cold war kept it in service for much longer. This was compensated by modernizations, and there were still 700 Type 74 in active service listed as of 2006. The vehicles are only just seeing actual retirement with the introduction of the Type 10 Hitomaru. 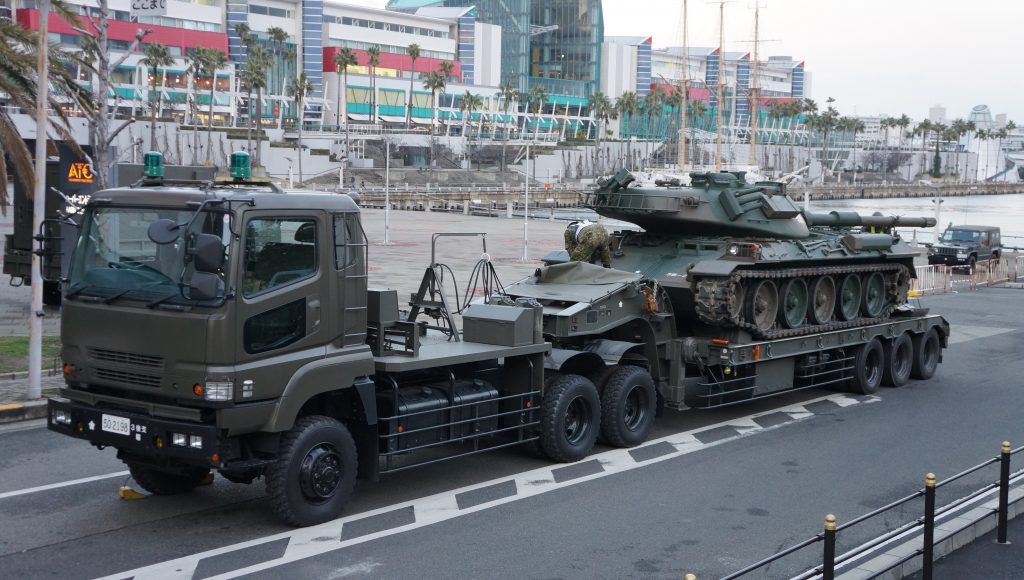 The Type 74 on the back of a Type 73 Heavy-Transport vehicle. Photo: - Wikimedia Commons.

Type 74 type C or D in a four-tone Summer/October pattern.

Type 74 Mod E in Winter exercises, in a Zebra pattern.