The PBV 301 was the first tracked armored personnel carrier developed for the Swedish army, but it was based on already existing chassis of the old Stridsvagn m/41, itself a licensed copy of the Czechoslovakian Škoda TNH of the thirties. The running gear of the Panzer 38(t) and 'Hetzer' can immediately be recognized on the PBV 301. However the PBV 302 (PBV stands for Pansarbandvagn, which translates to armoured tracked vehicle) was a completely new design, from scratch. 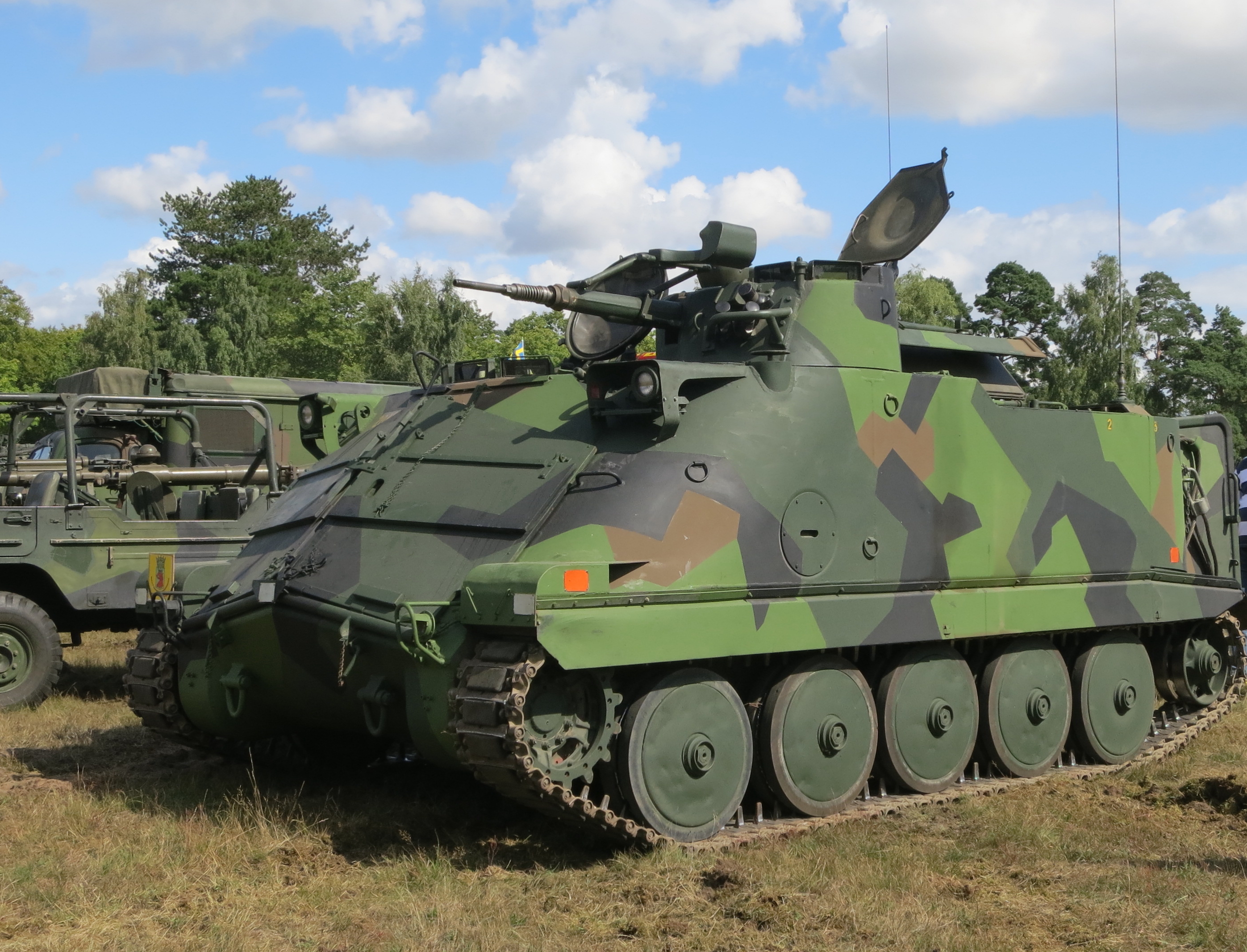 PBV 302 at Revinge, 2013 For a larger and more mobile vehicle, the easiest solution would have been to buy the US-built M113 which was just entering service. However, for reasons of neutrality, sovereignty and technological independence, the Swedish authorities preferred a local solution. This led to the PBV 302 in 1961, alongside with the conversion process for the PBV 301 which took place between 1962 and 1963, underlining its stop-gap nature. Both vehicles were quite different.

The general design of the PBV 302 was fairly simple. Hägglund & Söner (the same that manufacture today the famous CV90) started work on the vehicle in 1961, and the preliminary design was ready in 1962, just one year after the project was launched. This first prototype was tested, followed by others, with modifications requested throughout the trials. This culminated in 1966 with the acceptance of the vehicle into service with the Swedish army. Production started the same year and ended in 1971 after 650 had left the factory doors. They replaced the PBV 301 completely, and no PBV 302 was ever exported.

The PBV 302 strongly resembles the contemporary M113 in its shape and capabilities. They were, in the end, designed in the same period. However, the Swedish vehicle had a far more rounded hull and a 20 mm (0.79 in) Hispano-Suiza auto-cannon, just like the PBV 301, which was far more effective than the American cal.50 (12.7 mm). Another difference is that the PBV 302's hull was made of welded steel. Compared also to the PBV 301, road wheels were quite different to the Str m/41 basis as there are now five, smaller, and with no gap between road wheel 2 and 3. The chassis also has been lengthened from 5.35 m compared to 4.54 m. However, they share a similar type of suspensions. Its total weight was around 13.5 - 14 tonnes, the same as that of the M113, but the US vehicle was protected by an aluminum-magnesium alloy with 38mm of this alloy frontally compared to 23mm of steel armor on the PBV 302. Their capacities were similar, with a crew of three and eight soldiers in the back. Their top speeds were also similar, around (67 and 66 km/h), due to their similar powered engines (270 and 275 hp). The PBV 302 was of course amphibious. 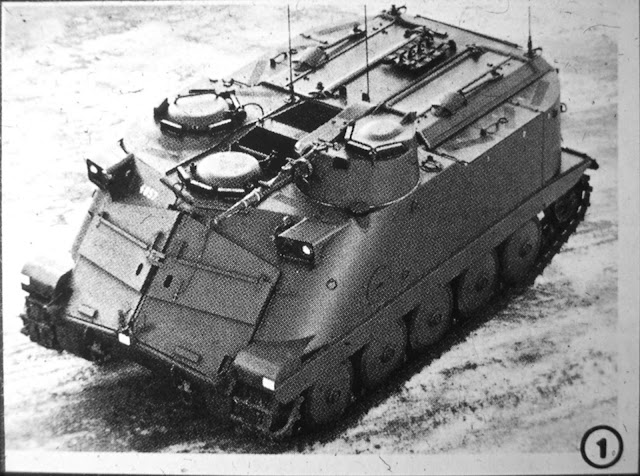 The particular configuration of the vehicle was due to its rounded hull, both at the front and at the back, contrary to the more angular M113. The driver was seated in the front of the vehicle in the middle, with the engine to his back. The commander and the gunner were to either side of the driver, the first in a rotating cupola to the right and the second in the turret on the left. Lacking any side viewports or portholes, the infantrymen, who were seated at the back of the vehicle on two benches placed back to back, could instead stand up and fire through two foldable roof panels. This may be the reason why Nuclear-Bacteorological-Chemical (NBC) protection is not mentioned as an option in the documentation. The infantrymen could access the vehicle through the two rear doors.

As already mentioned, the PBV 302 was protected by welded steel armor with a thickness of 23 mm on the frontal arc. The effective thickness is enlarged due to the angle of the front plate and the curvature. The rest of the vehicle was protected against small caliber weapons and shell shrapnel. The cast conical turret was the same as on the Swiss M113 or Gabon's EE-11 Urutu vehicles. The active protection evolved afterward and the PBV 302 received, as standard, six smoke-grenade launchers and two Lyran flare launchers on the roof.

With the adoption of a Hispano-Suiza de 20 mm automatkanon m/47D type 804 autocannon, the PBV 302 was far better armed than the regular M113. The cannons were available after the SAAB 29 airplanes were retired and disarmed. However, the PBV 302 was not a true Infantry Fighting Vehicle. The cannon could be elevated from -10° to +60° and rotate a full 360°. It could fire high explosive shells in bands of 135 or armor piercing rounds in short magazines of 10 shots. 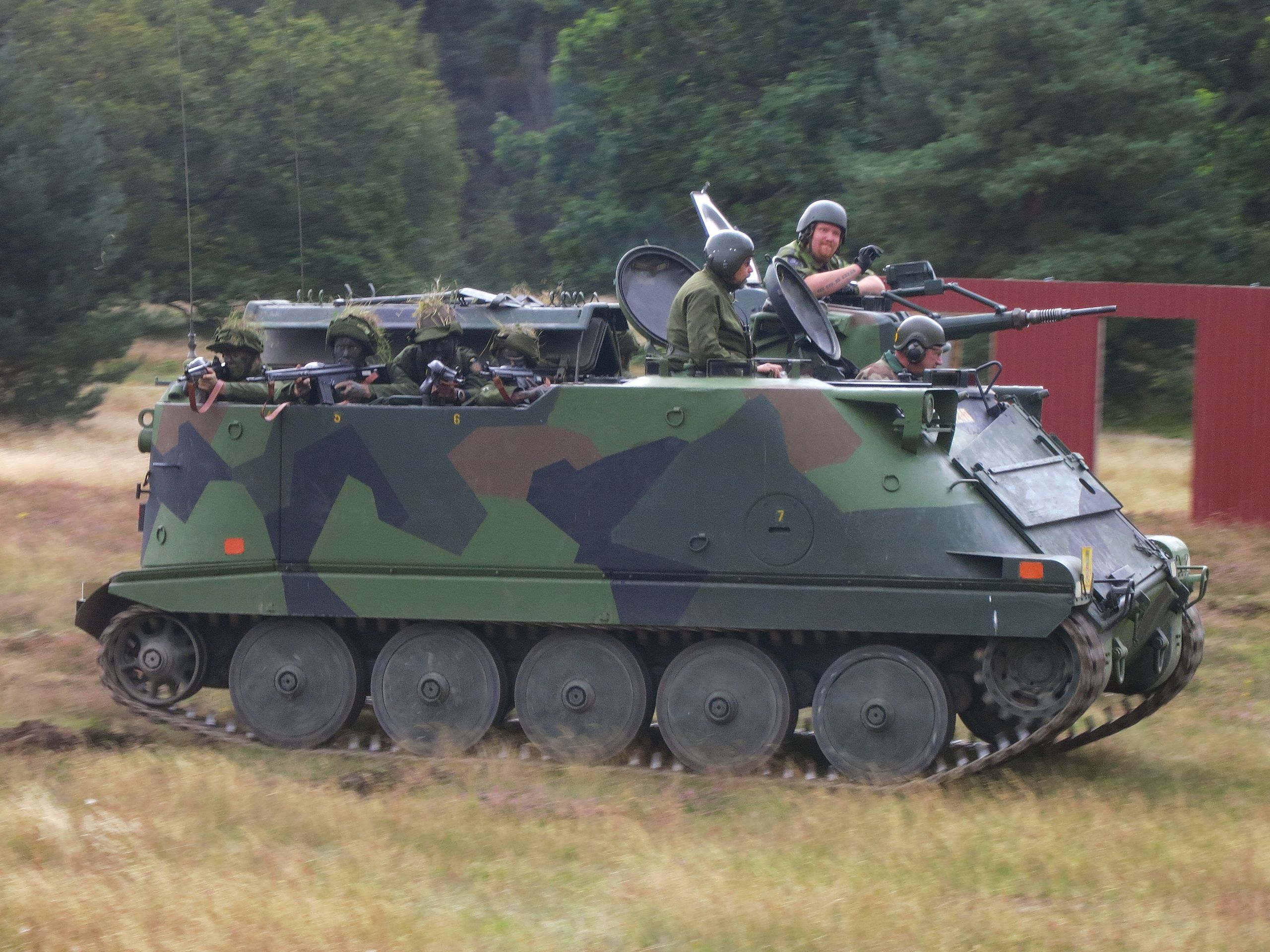 PBV 302 at Revinge, 2014 This complex system was replaced by the use of ten universal magazines with 30 shots each, giving 300 shots in total (505 according to another source). The cannon had a foldable sight theoretically used for ranges up to 2000 m and precision anti-aircraft fire. The turret was also armed with a coaxial Ksp 58 7.62 mm (0.3 in) machine-gun with 1000 rounds carried.

The heart of the vehicle sat between the crew members. The engine compartment held a Volvo THD 100 diesel capable of developing 270 hp (201 kW). This gave a 19.3 hp/tonne power-to-weight ratio. In turn, this allowed the vehicle to reach 66 km/h (41 mph) on road, with a range of 300 km (186 miles). The suspension used the same components as the Infanterikanonvagn 91 light tank, including the drive wheels at the front, idlers at the rear and 5 rubberized road wheels connected to torsion bars. The vehicle was amphibious but required some small preparations by the crew beforehand. In water, the vehicle was propelled and maneuvered by its tracks. Its light construction was well adapted to the conditions of the Swedish countryside, wet and muddy in the summer, snowy in the winter. The vehicle had a small ground pressure and a favorable power-to-weight ratio.

Despite the small number built, the PBV 302 and its chassis were used for a large number of specialized vehicles

PBV 302A: Basic version
PBV 302B: Improved version with interior spall liner and added armor
PBV 302C: Modernized version with the preceding modifications and a reinforced suspension, new headlights, flare launchers, a new turbocompressor and air conditioning. This version was used briefly in Bosnia and Kosovo before it was withdrawn. 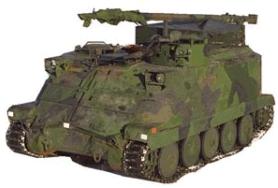 The PBV 302 was produced by Hagglund & Soner and entered service in 1966. With 350 built, without counting the variants, it was the main armored tracked personnel carrier of the Swedish army for many decades before its retirement in the 2000s. In fact, the first batch of 160 vehicles was retired in 2005, followed by a partial retirement of 210 others (C versions) in 2007. By 2009 the total retirement was planned, but it was decided that the C versions would remain active until 2018. A project was made to prolong the operational life of the vehicles by 20 years but, given the estimated cost, the proposal was turned down by the army. 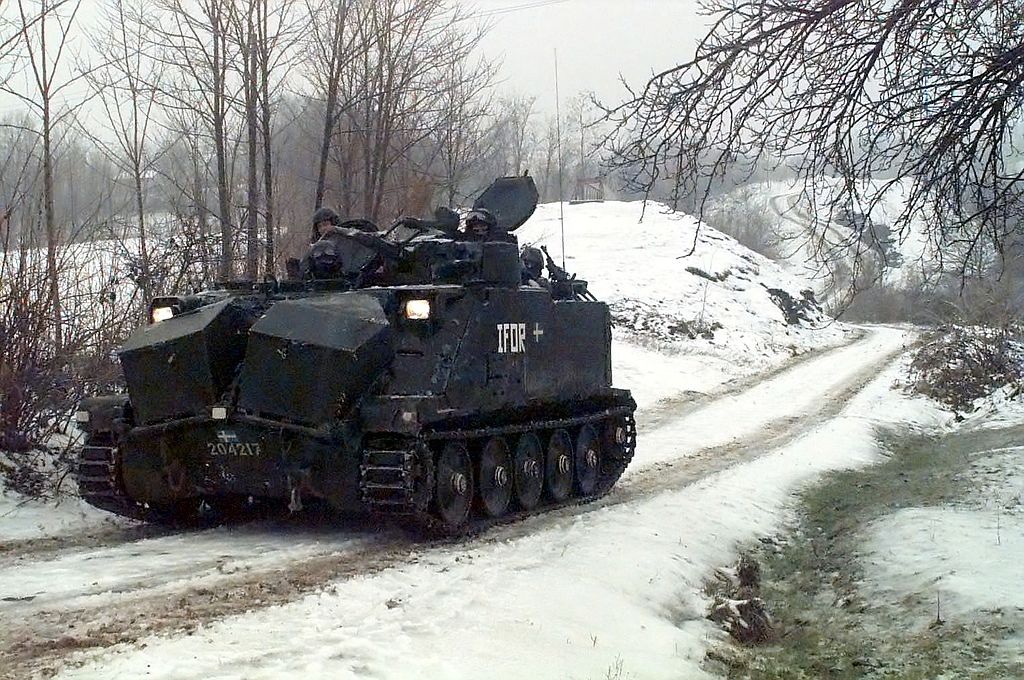 None were ever exported, as the rules on the matter are very strict in this regard. For this reason, the vehicle is little known outside the realm of the three crowns. The PBV 302 was replaced by the more powerful CV-90 infantry combat vehicles, the BV 308 for winter operations in the north and Finnish Patria wheeled vehicles. 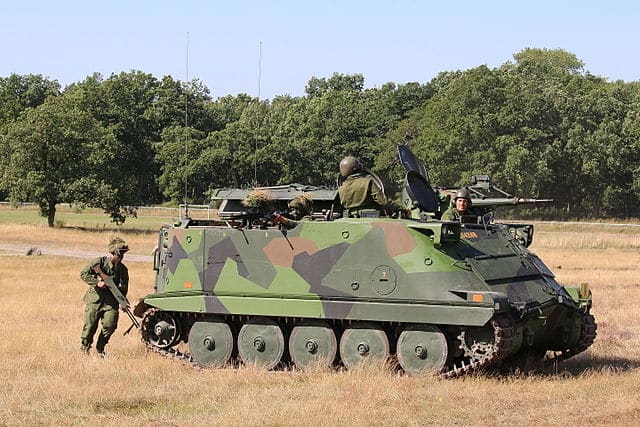 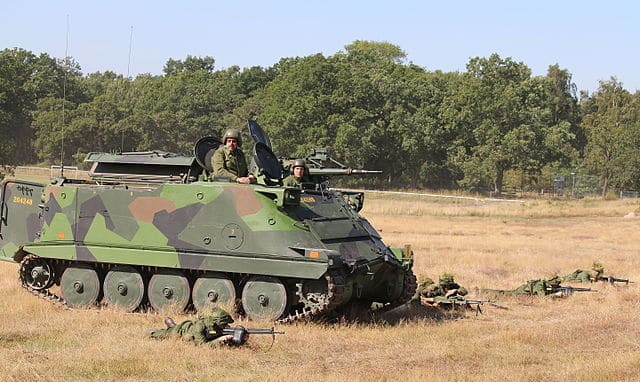 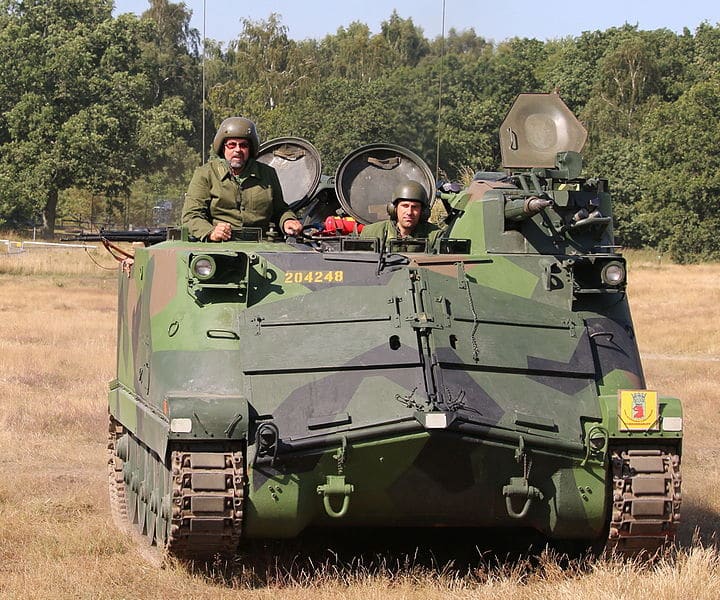 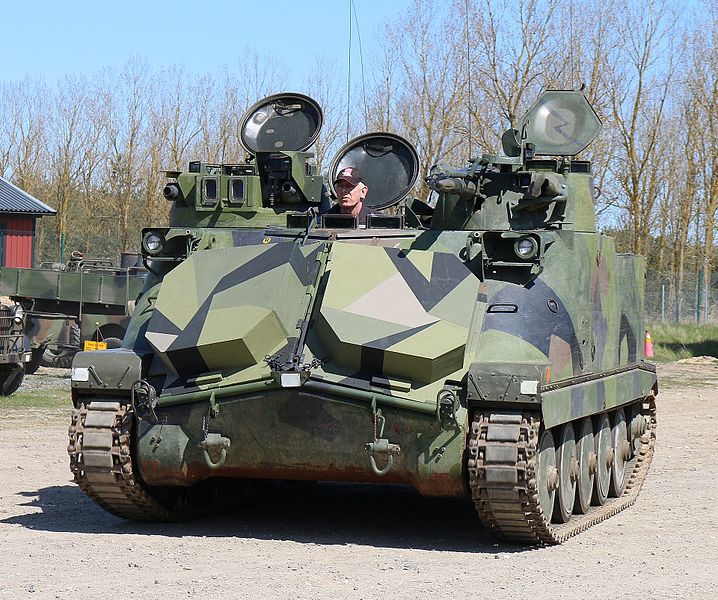