Still independent from NATO, Switzerland was concerned in the early cold war years by nearby countries under communist regimes, and although buffered by Austria and Germany in the east, had concerns about a possible invasion of the Warsaw Pact forces during their great planned conventional offensive. In the early 1950s, Switzerland was able to send a contingent in Korea but did not have the time to purchase or create a main battle tank in time. As a stop-gap solution, Switzerland purchased AMX-13s from France, and the old fleet of Hetzers inherited from ww2 were discarded. In the meantime, the Confederation's Army staff received in 1953 some funding from the parliament for the development of a domestic medium tank and decided to use the state-owned industrial facility at Thun, with specifications in accordance to the particular needs of the Swiss Army. 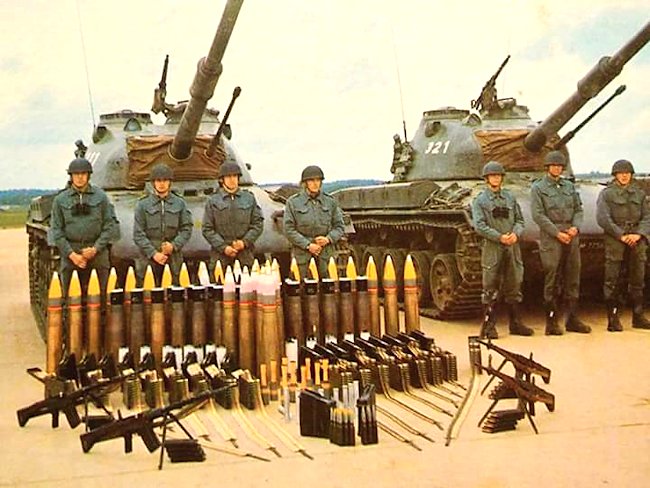 Eidgenössische Konstruktionswerkstätte Thun was able to deliver a mockup in 1956 and a fully operational prototype in 1957, designated by the Army according to the year of acceptance into service, Mittlerer Panzer 1958 or MPz58. This tank was equipped by a provisional domestic "Kanone 1948" 90 mm, which was certainly not up to the task against the T-54/55 family. At that Time, Great Britain led the way in terms of gunnery, and the second prototype was equipped with a British Ordnance QF 20 pounder, which showed the high required high-velocity characteristics for a main tank gun. But the pace of gunnery was quick, and the ten pre-production tanks built between 1960 and 1961 were all upgraded with the new standard L7 105 mm tank gun. These paved the way for the Panzer-61 main battle tank. 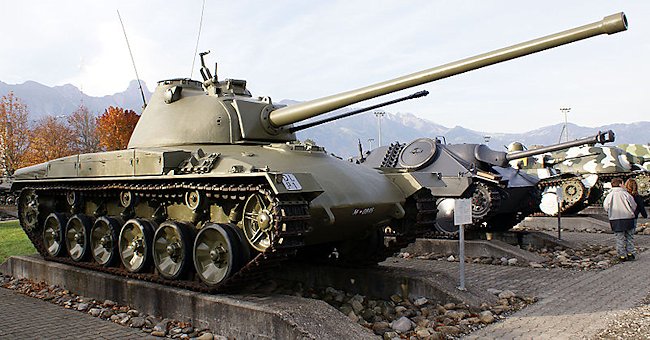 The Panzer 61 was much improved compared the Panzer 58 ten preseries that served as operational test-beds. The hull was identical, retaining the dome-like shape of the hull front glacis, with the driver's single-piece hatch in the middle and three vision blocks covering the frontal arc. Headlamps and blackout road lights were fixed on the front of the glacis on each side encased in armored shutters, and a deflector for fording rivers. The general design of the turret was unchanged. The commander cupola placed at the right, with a revolving table, single hatch with a periscope, and nine vision blocks. 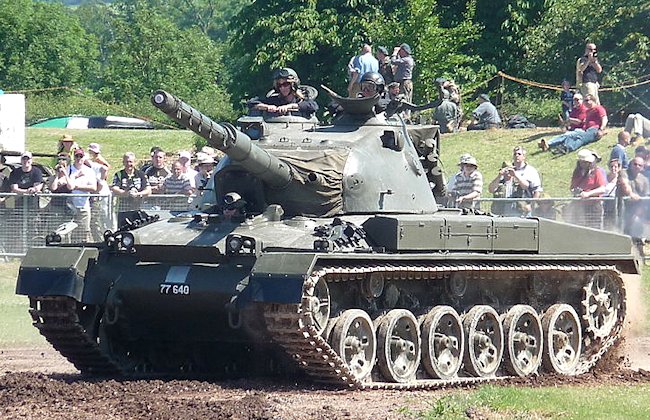 There was also the loader's cupola to the left, equipped with a rotating mount for an AA 7.5 mm LMG. Both had two-pieced hatches. The radio was placed in the rear part of the turret, and an external storage basket was fitted outside. In front of the commander's cupola was placed the main gunner's periscope, with up to 5x magnification. On the turret's side, the two objectives of the stereoscopic rangefinder protruded, protected by armored covers. Provisions at the rear for two banks of three electrically-fired smoke dischargers were made. Each could fire two rounds.

The main L7 105 mm gun was upgraded, integrating a thermal sleeve, the auxiliary unit was abandoned and the engine, although still compact, was a Mercedes-Benz 8 cylinder V diesel engine capable of 630 hp, able to sustain the same speed, although the hull armor was raised up to 120 mm (almost doubled) on the turret front and hull front.

Lessons retained from the Panzer 58 was that the coaxial 20 mm had no use in practice and was replaced lately by a regular 7.5 mm Flab MG-51 light machine gun, as the standard Panzer 68 and other upgrades followed from 1967 to 1994. These cumulated changes resulted in the Panzer 61 AA9 in the fall of the 1970s. The Panzer 61 served as a basis to test the Panzerkanone 61 SPG in 1972-1975, and for the next generation of Swiss MBT, the Panzer 68. The chassis also was used for the prototype of the Entpannungspanzer 65 ARV (armoured recovery vehicle) and first prototype of the Brückenlegepanzer 68 (BLV). Parts were also used on the Zielfahrzeug 68 series. Eidgenössische Konstruktionswerkstätte Thun is now integrated into the MOWAG consortium.

The Entpannungspanzer 65 ARV in action

The Panzer 58 was in service between 1958 and 1964 with the Swiss Army, and the ten vehicles were converted in 1964 to the Panzer 61 standard. The lessons learned with the Panzer 58 project not only served the Panzer 61 but pave the way for the development of Switzerland's armored doctrine throughout the cold war. The last Panzer 61 battalion was re-equipped with more modern Leopard II MBTs in 1994. Even these have to conform to the unique service specifications and tactical doctrine that were born to a large extent from the Panzer 58/61 program. Some Panzer 61 were disguised to be used as German tanks replicas in movies like Enemy at the Gates, and later All the Queen's Men and Defiance.

Mittlerer Panzer 61, standardized in the 1960s.