The 1945 requirement to replace the ww2 AEC heavy armored car was studied by the Fighting Vehicles Research and Development Establishment at Chertsey, and answered by the Alvis Car and Engineering Company Ltd with a modular chassis able to be used for many vehicles, of which indeed four were derived: The Saladin, Stalwart (high mobility load carrier) Salamander (fire tender), but most importantly, the Saracen. The same chassis was also to be used on the FV602 command vehicle, cancelled in 1949 and partly replaced by the FV604. This vehicle, rushed in production for the Malayan Emergency, has been since associated with grim police tasks and would be forever linked to policing in Northern Ireland and enforcing apartheid in South Africa. It has been used by 23 operators, and still a few countries have some in service.

Design of the Saracen

As mentioned earlier, the Saracen's chassis was based on the same used by a variety of vehicles, among which the Saladin. It was itself derived into three sub-variants (see below). It was a true 6x6 with independent torsion bars and wheeltrains, measured 4.8 m long by 2.54 m wide and 2.46 m in height, a ground clearance of 432 mm and weighted 11 tonnes in battle order with infantry and equipment, 10,170 kgs exactly and ready for transportation 8,640 kgs. The greatest difference with the armoured car was of course the upper superstructure, composed, in order, of the engine protected by an armored hood, the one-man driving cab, and the troop compartment behind. The armored driver cab has three hatches with sight slits, including a larger frontal one which was also used as escape or entry hatch for the driver. It had three No 17 day periscopes, one in front and one either side of his position, mounted in hatch covers. The folded forward cover provided increased visibility anf those either side too, when folded upwards. Right behind were section commander sitting to the left and the radio operator to his right. He also operated the turret, when standing as gunner of the vehicle, with a one-man turret also used on the Daimler Ferret Armoured Car. 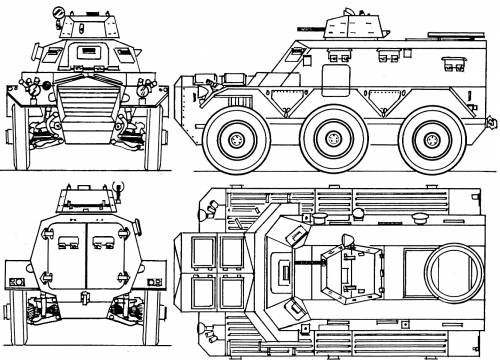 The after compartment was large enough for eight men to be seated on banks either side, with three firing hatches either side, but no pistol port. The armament, outside what the platoon carried, consisted in a single Browning Browning M1919 machine gun or L37 GPMG, while the aft roof section can be fitted with a roof ring to strap a Bren LMG or a .30 Browning anti-aircraft gun on a pintle. 3000 rounds were carried for the onboard weapons, not comprising those carried by the platoon.

The Saracen was propelled by the same Alvis engine used on the Saladin a Rolls-Royce B80 Mk 3A or Mk 6A, with 8 cylinder Inlet over Exhaust petrol. The B80 Series had a cubic capacity of 5,675cc, and was straight 8 cylinder running on petrol. It used a fluid-coupled, semi-automatic, pre-selector gearbox for transmission. It was rated for 160 hp and procured a power/weight ratio of 14.5 hp/tonne and a top speed of 72 km/h (off-road 32 km/h), over 400 km or radius, 700 ore more on the modernized kit provided to Inonesia. Fuel capacity was 302 liters of petrol, and the vehicle could climb a vertical obstacle of 46 cm, a gradient if 60% and 30% slope, and cross 1.2m water at 5kph. It was "amphibious" and swim when deeper, but can only drive with its wheels for direction and propulsion.

The Saracen has no particular protection against mines, but was protected by rolled homogenous armour, reaching 16 mm (0.62 inches) at the front and probably 8 mm elsewhere to stop shrapnells and assault rifle bullets. The troops disembarked from the vehicle through two back doors, each with its own small firing hatch. The Saracen was not protected NBC. Six smoke protectors for concealement were mounted on both mud guards (two triple mounts), with two more optional (so 12 in all); 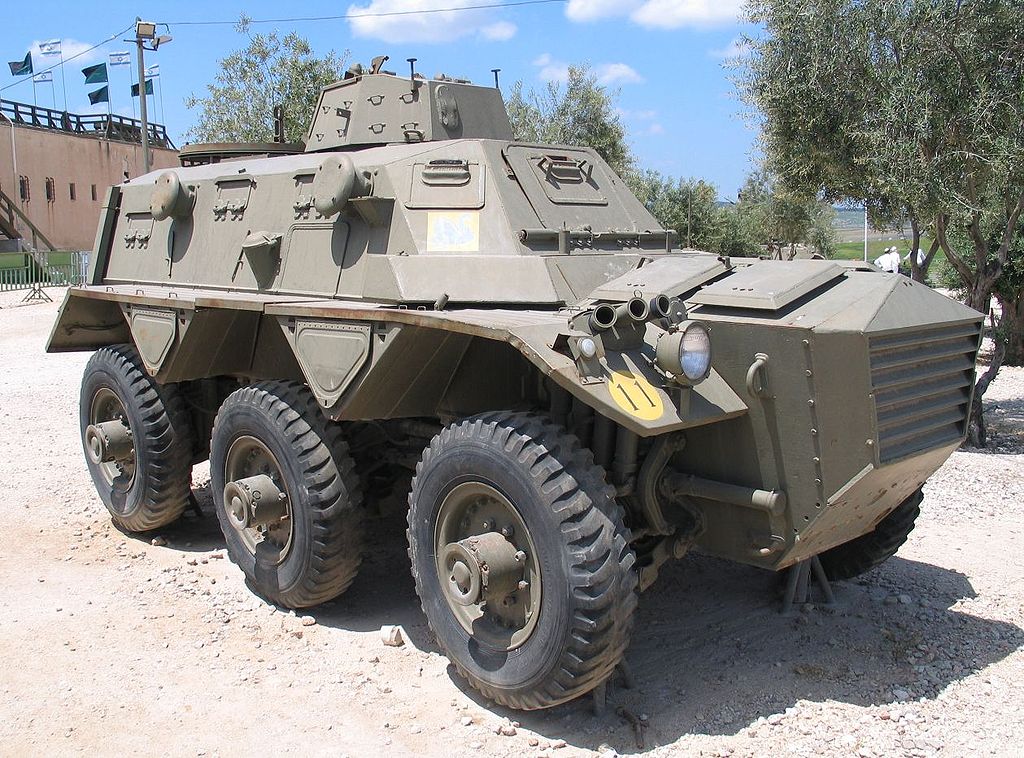 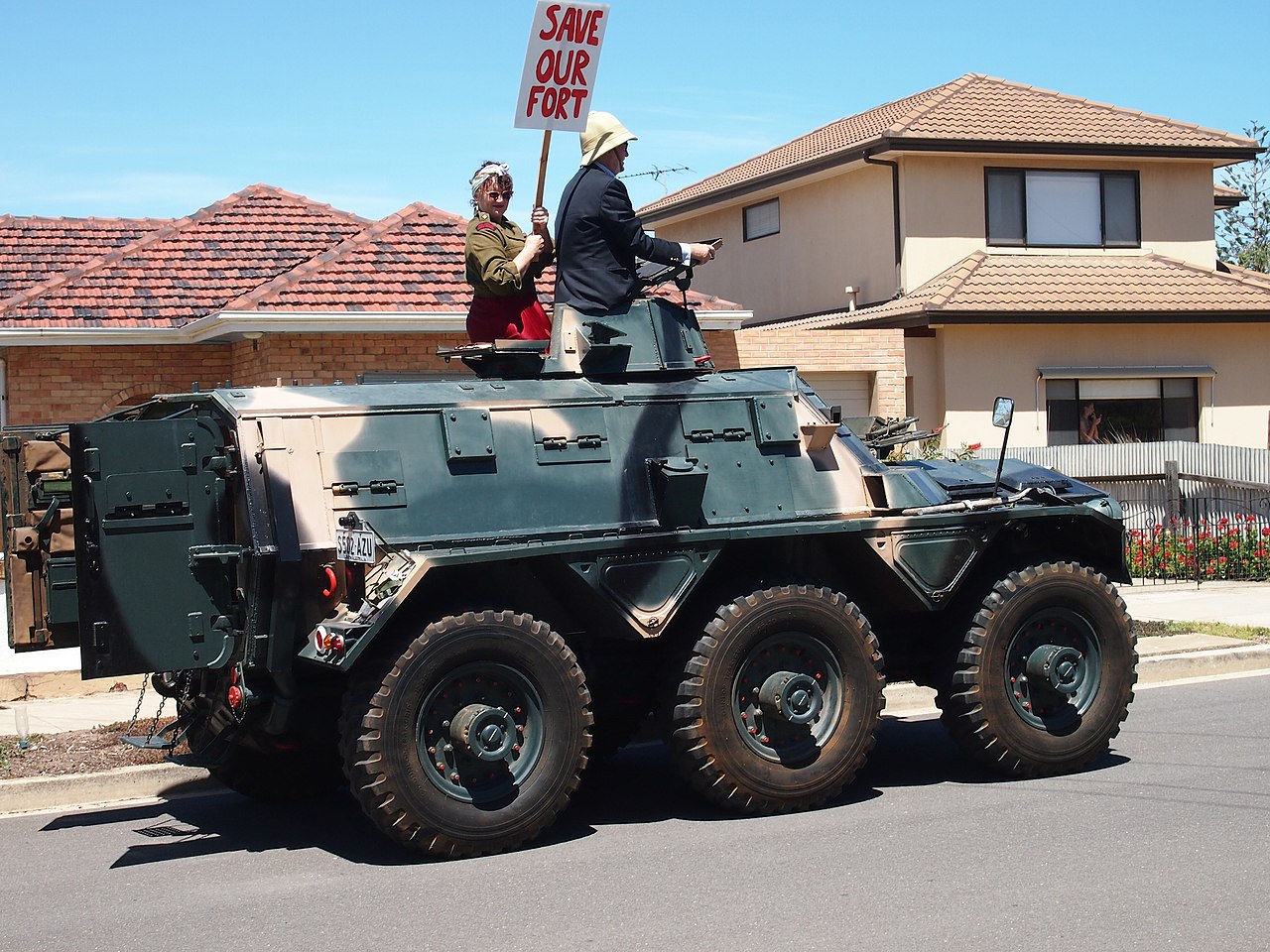 Australian Saracen at Fort Largs. It was used suring a community protest against the sale of heritage-listed Fort Largs by the state government of South Australia on 25 October 2014. Organised by the National Trust of SADF, with an Alvis Saracen and other vintage military vehicles. 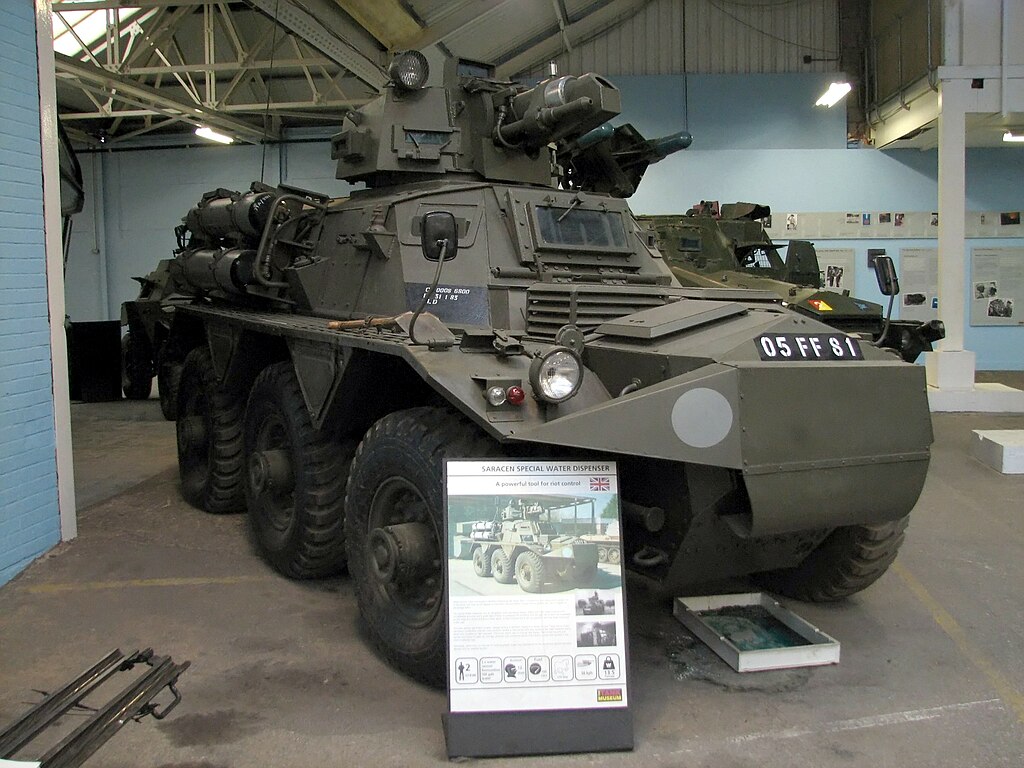 British Saracen with a water dispenser for police duties, displayed at Bovington. 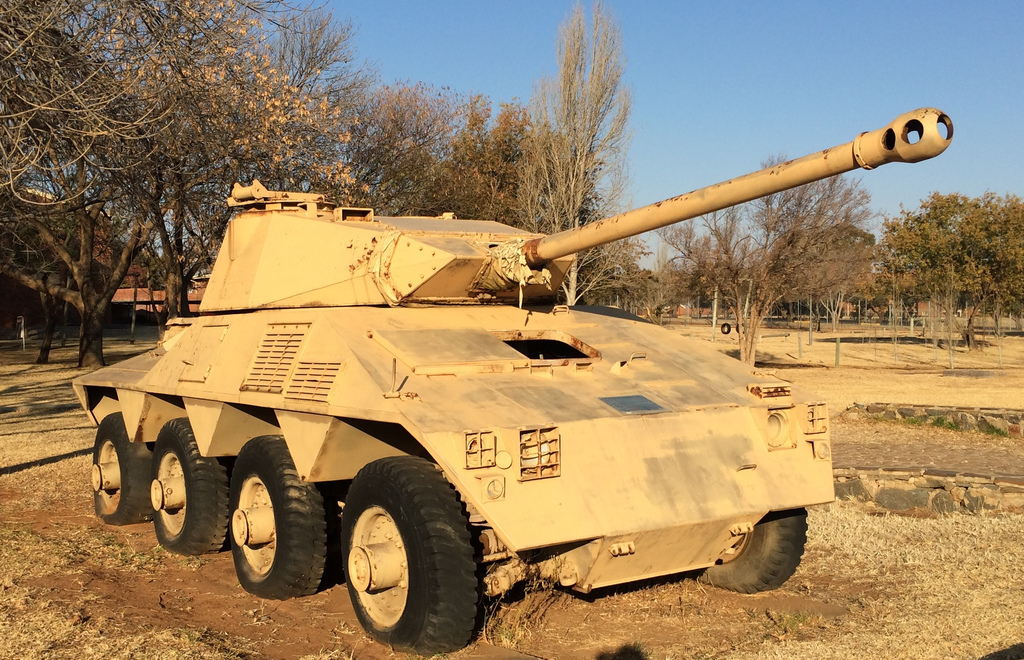 SADF Saracen used for tests with a 17 pdr gun at Bleomfountain. 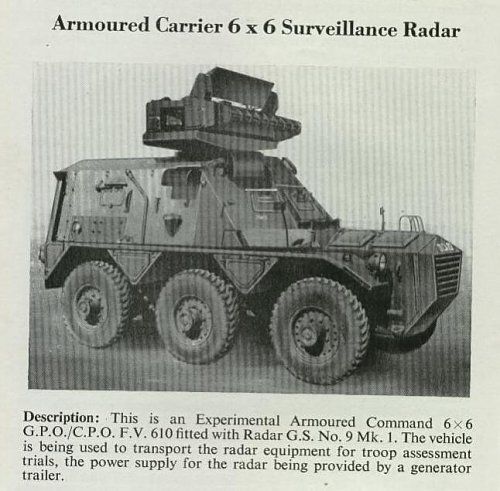 Production of the Saracen

Production started in 1952, as the vehicle was authorized after tests the previous year. It was the first dedicated, enclosed wheeled British APC of the cold war. Production went on at Alvis until 1976, not for domestic use, but rather exports. In total, The vehicle was indeed still used in the 1980s but was already showing its age. It was retired in the 1990s, but has been derived into three main sub-variants, eleven in total: 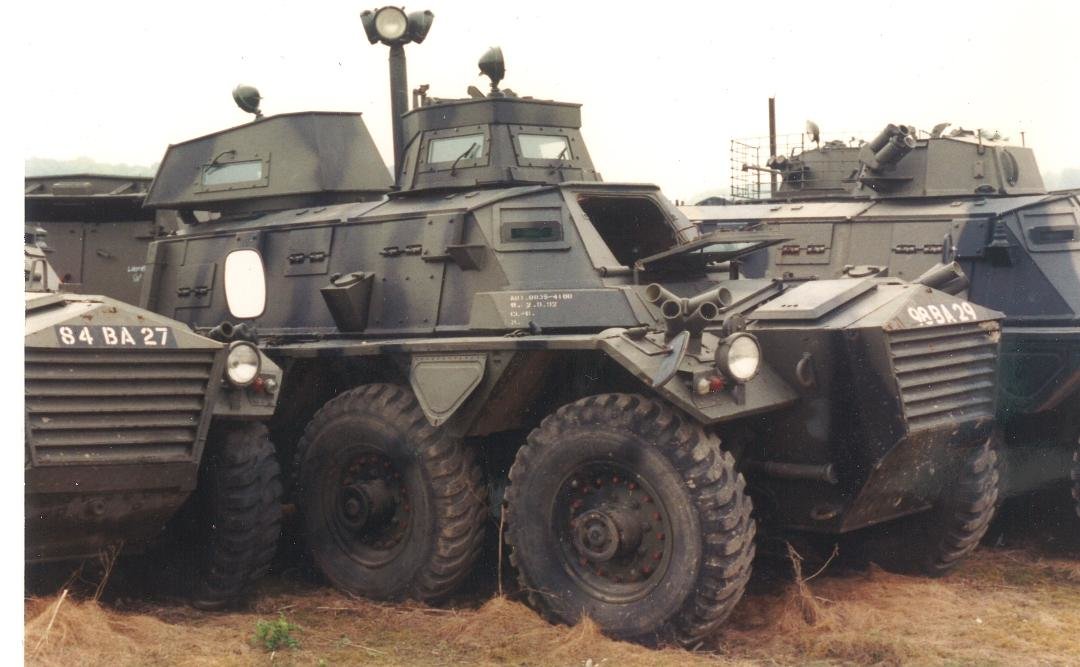 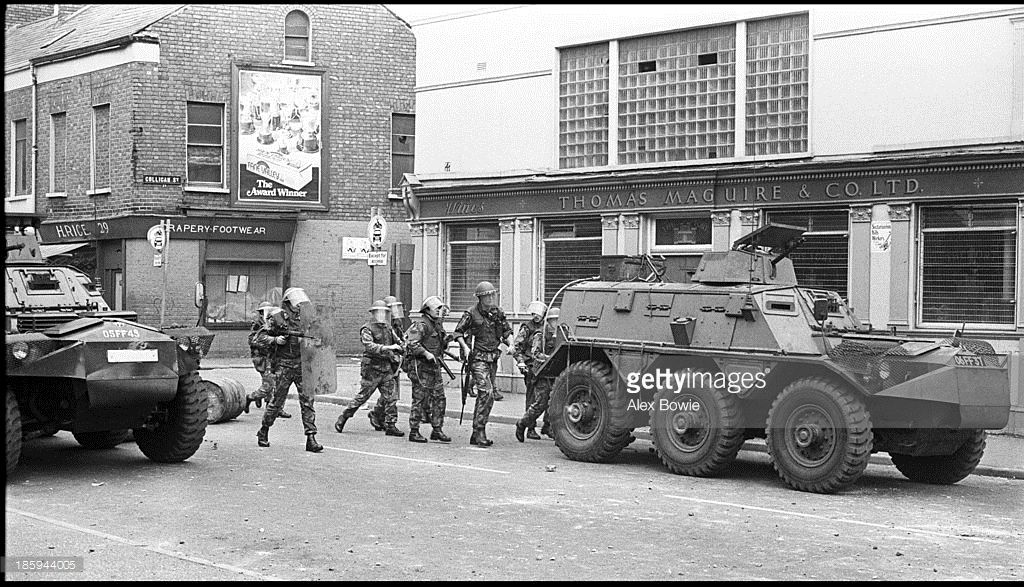 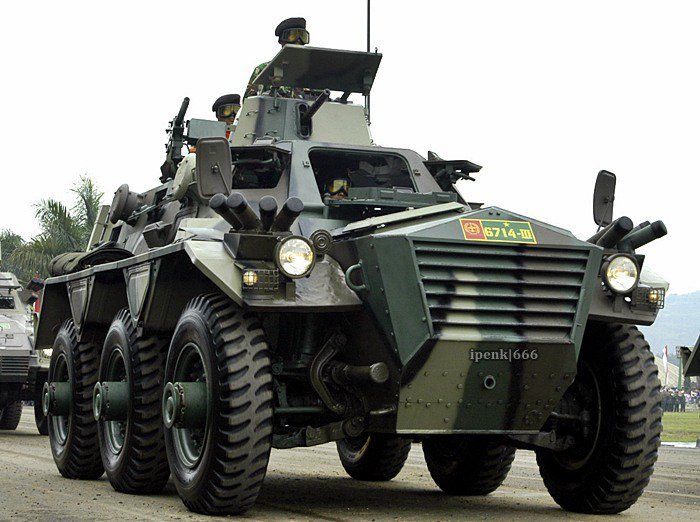 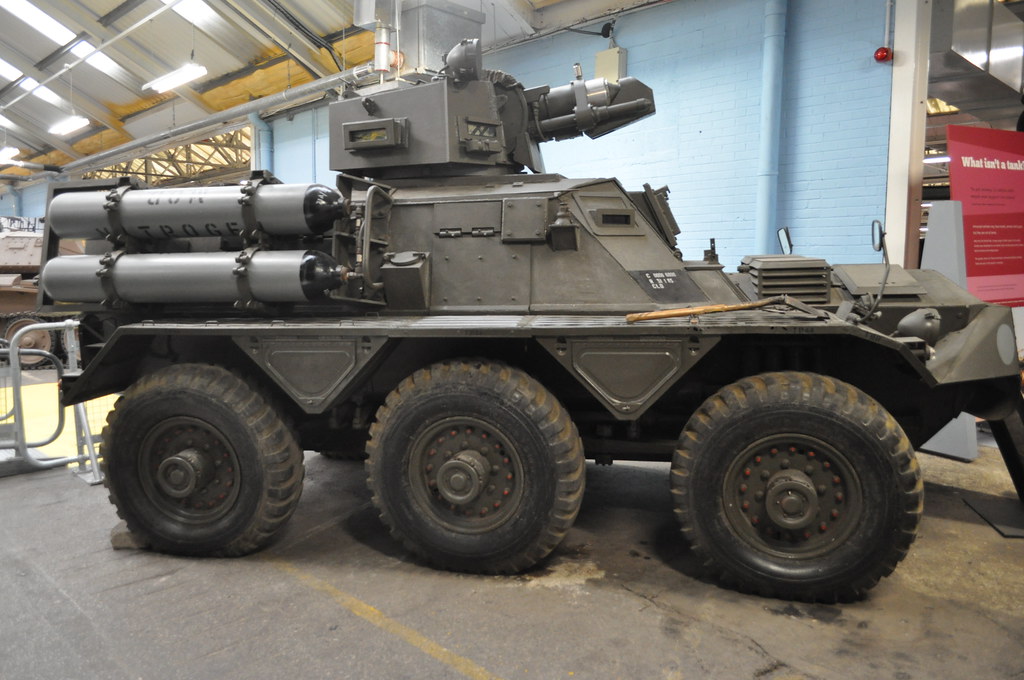 International operators of the Saracen

-Australian Army: 30 vehicles, registered as 115361 through 115390, now retired
-The Biafran Army had one vehicle
-The Royal Brunei Land Forces had 15
-The Indonesian Army operated 55 vehicle, some modernised by request in 1994 but the rest retired.
-The Royal Jordanian Army purchased 120 and still had 60 operational recently.
-The Kenyan Army operated 15 vehicles
-The Kuwaiti Army purchased 135 vehicles
-The Lebanese Ground Forces had 100, and the Amal Movement captured many.
-The Libyan Army operated 15 vehicles now retired
-The Mauritanian Army ordered 5 vehicles in 1990, second-hand status unknown.
-The Nigerian Army purchased 20 vehicles of which 10 are operational today.
-The Qatar Emiri Land Force had 30 in service.
-The South African Army (SADF) was one of the largest operator with 280 ordered between 1953 and 1956, most refurbished in 1979, by local security contractors. One was completely modified and fitted with a Comet tank turret for Rooikat early concet trials. Retired in 1991.
–The Sri Lanka Army operated 67, retired in the 1990s.
-The Sudanese Army operated 50 vehicles
–The Royal Thai Army operated 20 vehicles
-The United Arab Emirates Army operated 20 vehicles, now retired as the above.
-The British Army operated the bulk of the vehicles, notably in its colonies, now retired
-Civilian operators comprised the Royal Hong Kong Police Force (retired 1988, replaced by the Saxon) Used by PTU HQ back in UK, 1st Saracen static display. The South African Police had 8 in service, made infamous by the Apartheid. The Royal Ulster Constabulary used the "sixers" during the troubles in the 1980s in Nothern Ireland. Now all retired. from 2007 one was used for publicity stunts. The United States SWAT teams used one each at Sierra Vista, San Francisco depts. and Snohomish County Sheriff while one was used by the Tulsa Police Department re-mounted on a modern commercial truck chassis.

The Alvis FV 603 Saracen in action

The Saracen was used by operational motorized infantry divisions of the British Army in UK, Germany and NATO bases as well as in the colonies. In fact, it was rushed into production before the Saladin to be sent to Malaysia to face an insurrection and at Aden. In the 1980s it was still used by the Royal Ulster Constabulary in northern ireland "troubles", they appeared on the streets of Hull for driver training, as it looked like Belfast, and was a few miles from the Army School of Mechanical Transport.

Due to their numerous operators they also were seen in action at various levels in several conflicts: The Nigerian civil war, Sri Lankan civil war, Yom Kippur war (Jordanian side), and Lebanese Civil War, also by the Amal movement in the 1980s. In South Africa it was not apparently deployed during the Angola war, but rather used for police duties in the Soweto uprizing and in general at all troubles spots during the Apartheid. The regular SADF vehicles maintained in service were all due to modernization apparenty 250 of them. The years 1985-1988 were planned, notably to improve their RAM-D characteristics, however it seemed nowhere came out of it according to Dewald venter. Most of the Saracens were sold of to the private sector, such as security or mining companies.

Sources/Links about the Alvis Saracen