The Cambridge Carrier (FV401) was of box-like construction, fitted with independent torsion bar suspension protected by armoured skirting. A rear engine Rolls-Royce B80 was located at the rear and the front crew compartment was fitted with four hinged armoured flaps, raised for extra protection from shrapnel. The driver was provided with an episcope and the sides buffered by stowage panniers. It was also given a collapsible flotation screen like the Sherman DDs of D-Day and tested with them. Only a few pilot models were built, abundantly troop tested but never entered production.

Basically an enhanced oxford carrier, with a modern suspension, produced in small numbers as prototypes. It paved the way for developments which will lead to the FV430 vehicles family, including the FV432 APC, its direct successor. The Cambridge carrier was propelled by a Rolls Royce B80 coupled to a Merrit Brown C5 tranmission (or alternative), mated on the front drive sprockets, while the engine was at the back, in typical British fashion. The brand new suspension (nothing to do with the 1930s Hortsmann system) comprised a set of four roadwheels per side on torsion bars (among the first British vehicles to have those), with roadwheels as idlers at the back and two return rollers. What made it so special was an armoured cab at the front, protected the troops to seat in a fully protected environment. The armoured sides were hinged and could be folded down. The vehicle also had like the Oxford carrier, the added protection offered by the side stowage areas, enclosed in armoured shutters. The limited space available between the transmission and engine made it suitable mostly as an artillery tractor, with just enough space to carry the gun crew and their equipments. Two versions were produced and tested, the FV401 open top vehicle APC/Towing vehicle, and the FV402 Armoured Observation Post, which had a permanently enclosed cabin. But in the end, neither reached serial production. 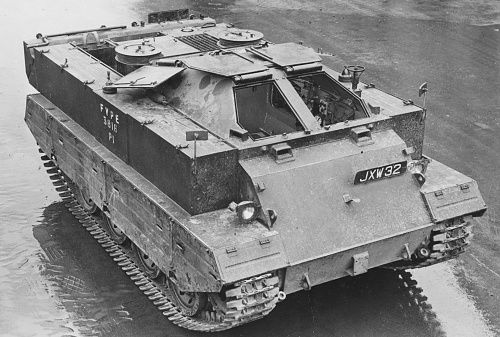 The vehicle was protected by light armor all around, with 8 mm glacis plate for the nose, flat sides able to defeat small arms fire and shrapnel. The folded armored cabin assured a better protection than the previous Oxford carrier/Universal Carrier, but the FV402 had actually a fully enclose welded armoured cabin roof, with armoured shutters and hatches. It was also distinguished by its two aerial antennae at the front of the cabin. None were NBC protected. For active protection, they had two banks of three smoke projectors mounted on either side of the glacis plate, as well as fixations for spare track links. The vehicles also mounted metallic side skirts, similar to those used by the Vickers Medium Tank of that time.

None, but towed artillery, mortar, and crew's personal weapons. One FV432 pilot ended as a target, and was later modified to launched the Malkara missile. It was restored and ended in the collection of Bovington (not accessible to public).

About a dozen vehicles (FV401 and 402) were built in small series for tests, so production never ramped up. There was no official order and field tests revealed despite its excllent mobility procured by the new suspension, the vehicle was way too cramped to be an effective infantry carrier. They asked to stretch the driverain by adding an extra pair of roadwheels, which led to the FV420. Focus shifted on the larger platform with same mechanical elements that was the FV420/421, leading in turn to the universal FV430 family, and the FV432 APC. The only two surviving vehicles are at Bovington and and another, for some time at the swords and plowshares collection. All in all, the Cambridge carrier is a foggy vehicle.