The Bedford RL "Pig" armored truck was officialy named in british ordnance as the "Truck, 3-Ton 4x4, Armoured (Bedford RL)", most sources calling it the "Bedford Pig APC". It was localized conversion of the needs of the British Army in Malaya after WW2, built on a modified Bedford RL 3-Ton Truck Chassis. The many vehicles produced also served in Aden, Cyprus, Indonesia and Singapore in the 1960s. It has long been retired, now only subsisting through photos.

Development of the Bedford RL APC

In 1946-47, after repatriating British troops from the far east, where they shifted after the defeat of Germany in May 1945, forces still around to deal with British interests in the regions were few. Apart some Komet tanks based in Hong Kong, armored vehicles available were often second-hand wheeled Indian pattern WW2 AH-IV armoured cars, or oother models left from WW2 stocks, and some very old turreted armoured cars from the early interwar. But soon, colonial conflicts and civil wars urged the need for modern APCs the homeland, already stretching its resources thin in peacetime between UK and Germany, could not deliver. One solution was to convert recent, just landed British Bedford RL trucks, with armoured plates to produce an APC, having no heavy armament to carry to simplify the design.

In general philosophy it looked like south african APCs of the 1970s as well. Some models lie the Rhodesian "Big Daddy" and a later mine-protected variant are related to Bedford RL armoured developments over 20 years. It seems the first Malayan APC were built out of CMP Fords or Chevrolets with a simple slab-side armoured body producing a "snout nose", which what might have been the origin of the "Pig" nickname, often attributed to the Bedfords as well, and the Humber later used in Ireland in particular. Whatever the case, the Bedford RL armoured was a one-off conversion performed by REME of Singapore in a span of a few years, probably between 1951 and 1955. Little else information is available.

The RL "Pig" had its armoured body manufactured at 40 Base W/Shops in Singapore, mounted on a standard 1950 Bedford RL chassis. The end result had a carrying capacity of 20 personal. David Fletcher, of Bovington's fame, also stated this vehicle in Malaya was called "The Bastard" in reference to its poor riding confort. The base was the dependable Bedford RL truck, recently seen in truck-encyclopedia.com. The latter was designed to deplace the WW2 fleet of the QL series, mass-produced until 1945. It was derived from the civilian SCL 7-ton truck. But for military service it was given an wheel drive, larger, military-grade wheels, and increased ground clearance to manage off-road terrain. Rated at 3 tons payload originally, the General Service (GS) trucks were later re-rated at 4 tons but with the same engine, resulting in degraded performances. The figures indicated cross country payload weight. This had an importance for the future APC version. The last Bedford RL left rolled out of the line in 1973 after a serie of 74,000 vehicle, more even than the wartime QL series (52,247), so it was really the bedrock of British military transport for most of the cold war.

A simple ladder-type with a front two roadwheels axle and rear twin axles (so 4+2, six roadwheels total). The chassis derived from the SCL truck was given a sturdier set of suspensions, above a higher ground clearance. The original engine mounted in the cab was a 4.9 litres (299.0 cu in) petrol engine, rated for 110 brake horsepower (82 kW; 112 PS). The Bedford 4WD chassis cab was mounted by drilling rig at the Ruston-Bucyrus facility. Two existed, the short and long wheelbase, the second being most common (RL). This was the latter that was used for the APC.

Without any other indicationbut dates, the vehicle was powered by the original petrol 6-cylinder 4.930 cm3 (300 cubic inches) 110 hp (rather than the later 6-cylinder 5.410 cm3 liquid-cooled diesel engine rated for 99 hp at 2600 rpm). Fuel capacity was 118 liter, allowing a basic 400 km (250 miles) range. It was of course less with full payload, which was the equivalent of the armor carried by the APC variant, probably around 300-350 km with its full infantry complement of 20 equipped soldiers. Transmission was 4-speed, with a 2 speed transfer case. Electrical 12 volt, with a possibly positive or negative ground battery. For mobility, Hydraulic brakes servo-assisted and six 11.00 - 20 tyres. They were not of the "run flat" bullet-proof type and there was no central inflatation system. Top speed was certainly below 40 kph (50 mph) on road since the original vehicle barely reched 60 kph light already. It was probably down to 25-30 off-road. Again, the weight of the armour, without notification of improved suspensions, was probably hard on the vehicle, much strained off-road.

Bedford the Bedford RL was entirely protected by an armored body there was "Big Daddy": https://johnwynnehopkins.files.wordpress.com/2015/03/bedford-rl-varients-drawings.jpg. Manufactured in Rhodesia, the basic RL was given an armoured flatbed to carry troops, seated, with 12 pistol ports either side. Other specialized variants existed, mine protected trucks, and the hybrid Bedford/Puma, with an armored cab and a new armored troop flatbed with extensions.

In the case of the present "Pig", the body was manufactured at 40 Base W/Shops in Singapore. According to Gordon A. Mackinlay of New South Wales (Australia) the Pig's armour plating was provided by the Royal Navy's Dockyard in Singapore, previously recovered from the scuttled Japanese Heavy Cruiser IJN Takao in September 1946...

The armoured body was simple in shape, with a flat front plate forward of the radiator grille, which protruded from it, creating the caracteristic "snout nose", slab-sided body encompassing the cabin and rear compartment, where the flatbed was. The windshield was flat with two armoured shutters, and primatic in section towards the roof. There was also a higher roof aft, with an enclosed shield over the front hatch, and a second roof hatch at the rear. Some photos shows the rear hatch was placed on sliders and rectangular, the front one was circular, with a metal ring around to install a light machine gun. There were six doors in all: One on either side of the cabin, two mid-way of the troop compartment and a twin-door on the back plate. There were no pistol ports but ten openings with sliding shutters inside. There could in thoery allo a soldier to fire on the move, standing, but they were more there for ventilation in a rather hot climate... Data about the armour thickness is not known. It was likely around 8 mm, if the plating was taken from the cruiser's susperstructures, lightly armoured. The whole armour was bolted. The basic APC weighted 8 tons, so if the armour plating represented three tons in all which seems reasonable, therefore the overall weight would have been around 11 tons. The Pig APC was designed as a "police" vehicle, dealing with insurgents armed with rifles for the most.

The APC was unarmed by default, but the infantry carried their own weapons, and one machine-gun could be installed in the ring mounted around the forward hatch. It was likely the standard NATO GMPG or a Bren.

Used with the 1st Battalion, the New Zealand Regiment, in Malaya during the emergency, between 1955 and 1960.
https://www.kiwimodeller.com/index.php/forum/40-follow-as-i-build/28073-kiwi-diorama-the-malayan-emergency 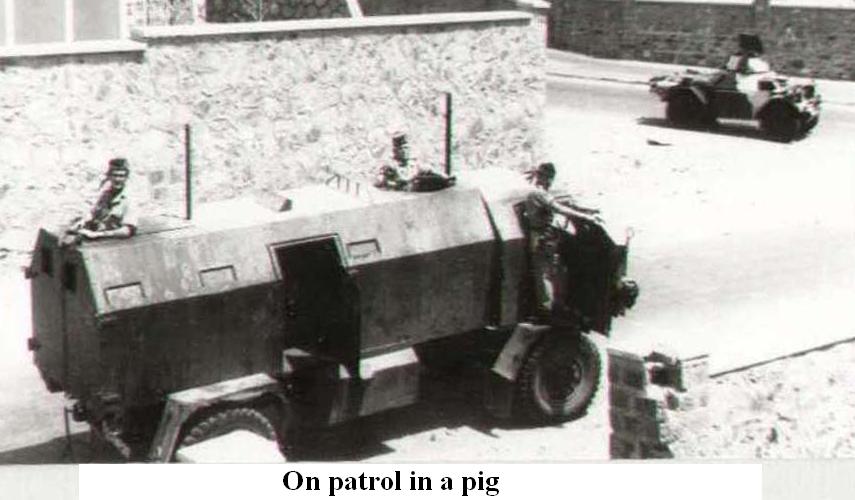 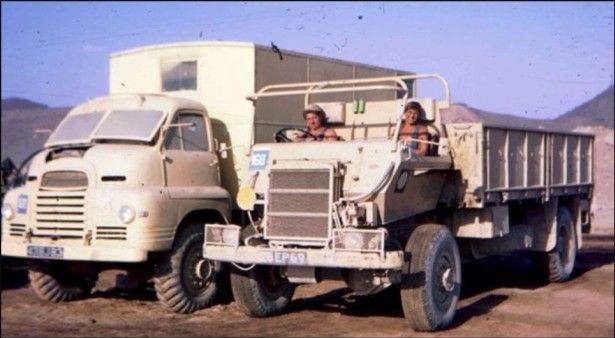 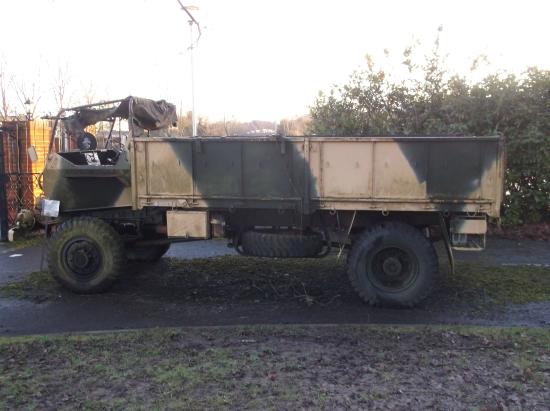 Sale at Reme museum of technology

It was used by Ghurka, New Zealand and Rhodesian units. They were later sent to Aden and used from 1960-7 src: https://www.matrixgames.com/forums/tm.asp?m=4869369&mpage=4