From January 1946, Several concepts were designed to comply with the new US Army specifications based on the new T37/T41 chassis under development. On two were selected for further development, the T98 and T99 155 mm howitzer motor carriages (HMC). Towards the end of the Korean War, the US Army sought to replace the M41 Howitzer Motor Carriage with the M44, a brand new vehicle using the drive train of the recent M41 light tank and the prototype retained was designated the T99E1.

Developed in parallel, the T99 was the first officially authorized, by September 1947. Two pilots were constructed by Detroit Arsenal. They were armed with the new 155 mm Howitzer T97 which had a traverse of 30 degrees on either side, and -5 to +65 degrees elevation. The Korean War broke out in 1950 and trigerred some emergency, with the "crash development" program. The development and production of modifed pilots went on and encountered numerous problems due to this rush. All was pressed on for these to be ready for the war in Korea, as soon as possible.

The T99 was based on the T41 chassis but the latter was alreadys improved, into the T41E1 als rushed into production. So the T99 was redesigned T99E1 to retain commonality between designs. The T99E1 weighted 30 tons and used the same power package. Components were rearranged however of course to free the rear part of the hull. Tests showed a top speed of 35 mph. It was further developed as the T97E1.

The rushed development of the T99E1 underline many design flaws. As a result, the T99E1 was cancelled despite the production of over 250 vehicles. The design was altered again, evolving into the T194 which had an open top and carried the improved 155 mm Howitzer T186E1. It was standardized as the M45. The first 250 of these T99E1s were then rebuilt as the T194 standard which had the new improved Continental AOSI-895-5 engine, standardized as the M44.

For the 250 vehicles already produced by the Massey Harris company, it was discovered that firing the howitzer discharged poisonous fumes into the gun compartment, leading to the cancellation of the order. Engineers offered a revised design called the T194E1 with a modified howitzer and open crew compartment that successfully vented the fumes, though at the cost of crew protection. This added extra development time, making the whole purpose of rshing the program missing its deadline. The M44 was never in action in Korea but was evaluated the last weeks.

Design of the M44

The larger chassis and more powerful engine gave it increased battlefield mobility. Fortunately the better chassis allowed to create a fullly enclosed armor around the howitzer, unlike the M41 and M12 Gun Motor Carriage. The five man crew had an extra armor protection. The latter was a 155mm, a modified version of the M114, known in the ordnance as the M45 Howitzer. It was a a modified recoil system and was more compact. Only its top and barrel emerged from the casemate, as well as the the 24 rounds of ammunition placed inside two racks at the rear of the vehicle. The commander was given a cupola aft, with a mount with a cal.50 Browning.

The semi-enclosed casemate comprised a folding window left of the gun for the gunner, and at the front of the casemate was located engine air cleaner service doors. On both sides were located fire exitinguisher service doors. The right one was taller than the left one. At the front nose were located lifting eyes, and head light guards on both sides. The drivetrain comprised a front drive sproket, six roadwheels per side (the last was used as an idler) and four return rollers. Behind were located four shock absorbers and two hydraulic dampers. The Continental AOS-895-3 (500 hp) was later replaced by the Continental AOSI-895-5 (550 hp) on the M44A1. The casemate built around the howitzer was plated by 13 mm of armour (.5 inches). Top speed was 45 kph, and the crew comprised five, the driver, Gunner, Loader, Commander and Radio.

Total production figure is allusive, either 250 US-built, later distributed through NATO countries through MDAP, or 600 to 700 by additions.
The already produced vehicles were upgraded to the new standard and deployed to frontline units in 1954, too late to see action in the Korean War. The M44 fleet was later upgraded with AOS-895-6 engines designated M44A1. The M44 served on until 1963 when it was replaced by the M109 in the 1970s. The M44 was apparently never deployed to Vietnam.

The M44 was exported to West Germany (Bundeswehr), Italy (where it was called the Semovente M44), and the UK (where it was called "Cardinal", to retake the traditional ecclesiastical naming for self-propelled artillery) and Turkey. In British use, by 1956, the United Kingdom received 58 M44s through the Mutual Defense Assistance Program. 52 were deployed to the British Army of the Rhine (West Germany) in the 1st Royal Horse Artillery and the 4th Royal Horse Artillery. The remaining six were based on UK. They replaced there the old Canadian-built Sexton self-propelled howitzer. Later, the M44s went to reserve units, and ultimately they were retired and returned to the United States in June 1968, to be scrapped. A handful were preserved, notably at Aberdeen proving grounds.

The old fleet of M44 SPHs in the inventory in the 1970s were southt after for either a replacement or overhaul. Turkey choose the latter, as it did with man other weapons systems. The M44 was completely overhauled along a program that went on the 1980s, led by Rheinmetall. It ran from 1986 to 1992 and concerned all remaining 222 vehicles suitable for upgrades. Here are the list of improvements: *Some sources claim they have now been withdrawn, but some were filmed and showed in an RT footage allegedly in Northern Syria by 2015.

The M41 HMC, the M44 was replacing, for comparison

M44 with its lowered spade

M44 of the 3rd cavalry, preserved

Italian Semovente M44, the large Italian flag was probably for the display (preserved)

M44 of the Spanish Artillery with tarpaulin (now preserved)

M44 self-propelled howitzer of the Bundewehr 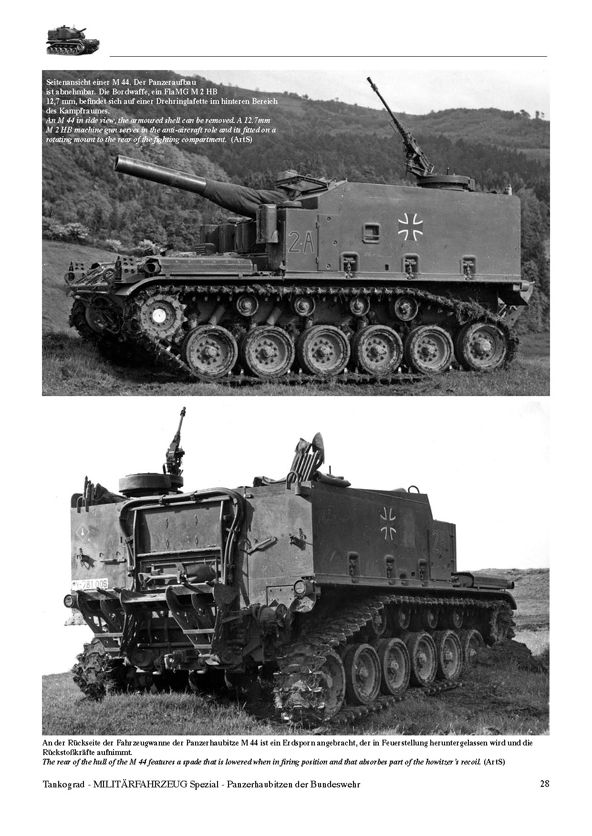