The M53 155 mm self propelled gun was designed to procure long-range fire support to allied positions while keeping pace with mechanized formations cross-country. It was adopted in 1952 for both the Army and Marine Corps, all made by Pacific Car & Foundry Company. As the M55 was the same vehicle designed around a 155 mm howitzer, M53s were stadardized as M55s, but production stopped in 1956 and use mantained in Vietnam by the USMC until around 1969, but many more years with NATO countries such as Belgium and Turkey.

As the US Army flexed its muscles in mechanized armor during World War II, self-propelled artillery was developed from existing chassis to help support units in the field. A doctrine was built on the use or mobile artillery developed quickly on sxisting chassis such as the M3 light tanks and M4 medium, or the Chaffee in 1945. Vehicles such as the M7 105-mm howitzer motor carriage (better known under its British name "Priest") were built extensively and early on using the M3 medium tank (Lee/Grant) chassis. However they still carried a relatively light gun compared to the size and consumption of the vehicle. This led later to the development of heavier guns and howitzers mounted on reinforced platforms, like the M12 and M40 with 155 mm guns, M41 and M44 with their howitzer versions, whereas 105 mm guns were still carried by the M37 Howitzer Motor Carriage in 1945, M52 and M108 in the 1950s. 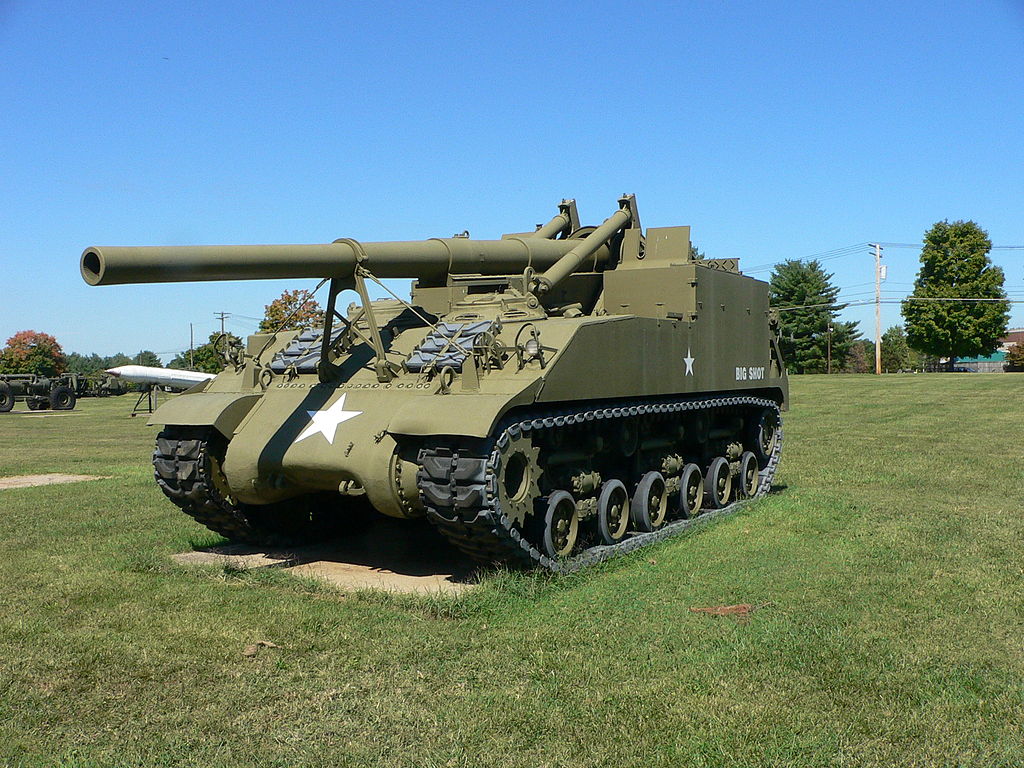 Another solution was the development of gun tractors: The easiest ways, once again, was to convert existing chassis of older models, such as the M33 (M3 Lee), M34 (Sherman) -mostly used as an ARV- and the more famous M35, based on the M10 Wolverine, and developed specific vehicles such as the M3 and M4 high speed tractors, and the M6 at the end of the war. This development went on, with the M8 based on the Walker bulldog in the 1950s. However carrying a heavy artillery piece with a good level or protection was still in the mind post-war planners, and requirements were made, still imposing to be built with using as many components of existing vehicles for simplified logistics, maintenance, reducing weight and cost.

Development of the M53 self-propelled gun

M53 in tests, notice the rubber side skirts, retired in active units. This photo was taken during operation TEAPOT, US Forces stationed on a site of an atomic blast, at the Atomic Energy Commission's Nevada Test Site. The M53 will stand exposed, 4,000 yards away of the burst. Troops were in trenches meanwhile, and just after the blast, where supposed to move out and inspect damage on the vehicles.

In 1950-1951, Pacific Car & Foundry was awarded contracts to develop the new self-propelled around a 155-mm gun but also enabling it to swap to the 8-inch howitzer with minimal work. It was designated T97, the second T108, but both used components from the M46 and M47 medium tanks. The first one came off of the production line in August 1952. The second in 1953, but production for both vehicles ended in April 1955. T97 was standardized as the 155-mm self-propelled gun M53, the T108 as the 8-inch self-propelled howitzer M55. 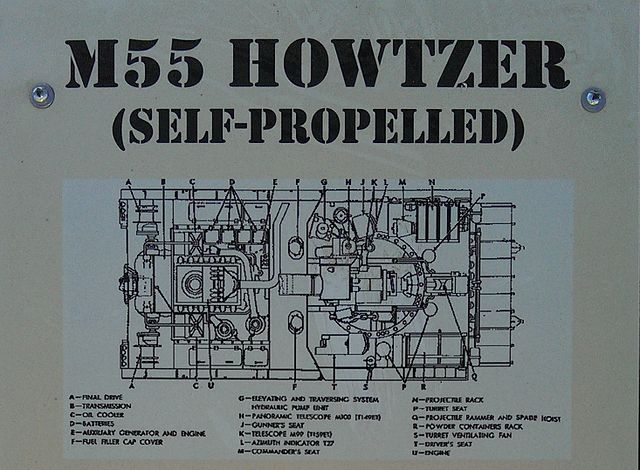 The M46/M47 medium tank chassis was kept but completely modified internally to reverse the position of the powerplant, and locate the main artillery, in a tailored turret, at the rear. The M53 engine and transmission systems fitted into the front also brought some protection advantages for the crew. The engine space took most of the nose of the vehicle, and there was no space left for the driver to fit in. Therefore, engineers at Pacific C & F chosed a radical and unusual solution: All the crew was seated in the turret, including the driver. He was therefore relocated in the front-left of the boxy turret superstructure. However, to allow him to see the road in case the vehicle was in the move while the turret was also traversing, it was chosen to have him placed on a rotating seat, thanks to the use of an electric rotor driven by a gyroscopic device. This allowed him to always stay facing the road, whatever the position of the turret. This amazing system was the same on the M55. The entire crew comprised six personnel: Driver, commander, gunner and ammunition handlers. To stabilize the vehicle when firing, a large toothed spade, folded up at the back when travelling, was deployed into the ground. 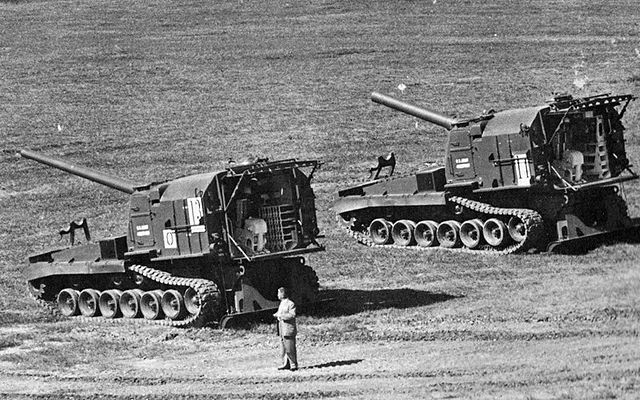 M53 (left) and M55 (right) deployed side to side for comparative trials. Notice the barrel difference. The different muzzle travel mounts, partly folded, are visible at the front, as well as the internal arrangement, notably the ready rounds store cases.

The turret carried a main gun, 155mm M46, married to its M86 mounting. The size of ammunition only afford to carry 20 projectiles inside the turret. On top, a .50 cal. Browning M2HB heavy machine gun was installed on a rail around the commander cupola to the right of the roof. It was provided with 900 rounds of ammunition. The main gun M46 was derived from the WW2 155 mm gun M1 "Long Tom" also carried by the M40. Turret's accesses were through a rectangular door on the right side and roof hatches. However this SPG/SPH had very limited traverse due to the design, of only 30-degrees right or left. It was driven by an hydraulic-powered system with manual backup, and the M86 mount procured an elevation of +65 to -5 degrees. Thanks to this, it could fire at 25,000 yards, up to 2800 ft/s (853 m/s) when exiting the barrel. Outside the HE shell, the APBC model, star shell, smoke, cheical and dummy models were procured. Tests were made with the AP M112 Shell on a 30° plate of RHA, and it was able to penetrate 160 mm down to 152 mm at 457 and 914 m respectively. Against a concrete fortfication, the HE M101 Shell could penetrate 2,011 to 1,402 mm at 914 m (1,000 yd) and 4,572 m (5,000 yd) respectively.

Armor was made of rolled homogenous steel, assembled by welding. It offered excellent protection all around against small arms fire and shrapnel. The hull front was rounded, housing the transmission and final drives sprockets, the engine hood running above was split in two longitudinal slopes, about 1/2 of the total lenght of the hull, with exhaust either side, and the fighting compartment behind. There, a ring supported the large boxy turret, with flat, vertical and horizontal faces. There was a flat roof with sloped sides and squared-off rear. The 155 mm gun barrel lacked any sort of recoil reducing measure and the back's top and bottom hatches were just left opened for the gun to be easier to work around. However since this was the first NBC-protected SPG/SPH in the US Army, they were supposed to be left closed in combat. 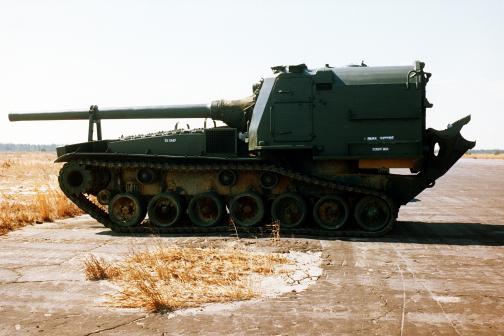 Power came from a Continental AV-1790-5B, 12-cylinder, gasoline engine. Its output was 810 hp. It was mated to a General Electric CD-850-4 transmission, with 2 forward gears and 1 reverse. On the M53 a "wobble stick" arrangement was chosen for the driver, later changed and standardized. Top speed on flat was 35 miles per hour on 150 miles range. While the M46 and M47 were improved, M53 were introduced also in production to these changes. The most obvious was the swap to the Continental AV-1790-7B engine and CD-850-4B transmission and steering wheel for the driver. The base running gear showed seven double-tired road wheels either side and no rear idler, replaced by the seventh wheeltrain. The track linkage adopted a "drooped" appearance, and the upper track was supported by three return rollers on either side of the vehicle, unequally spaced. 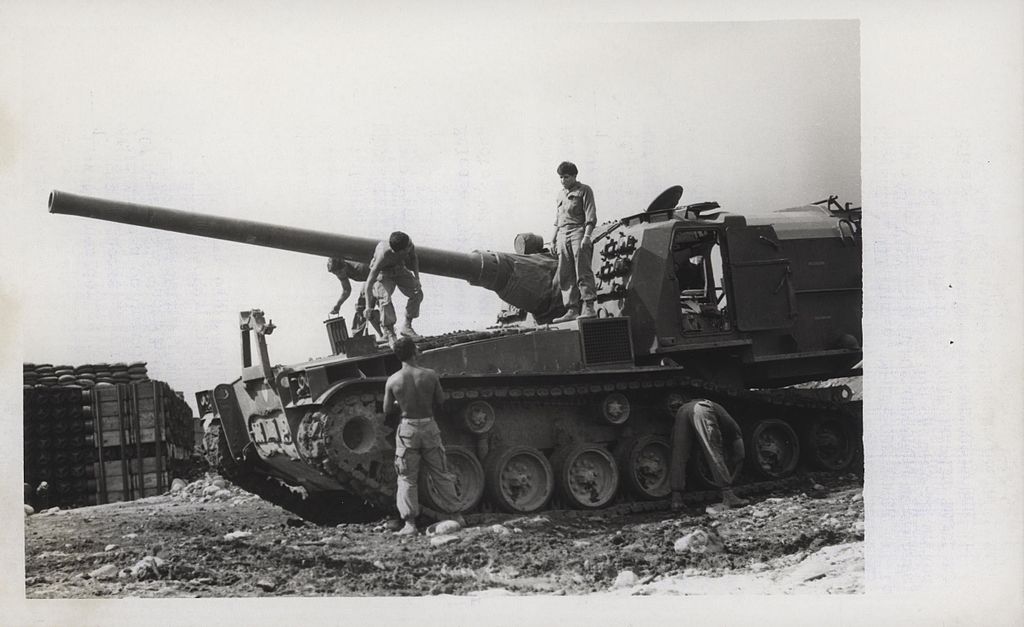 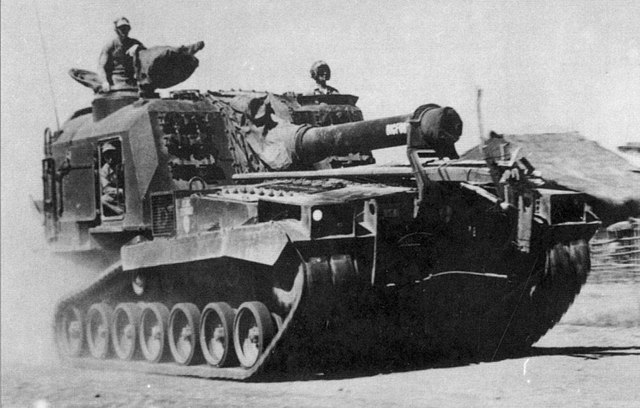 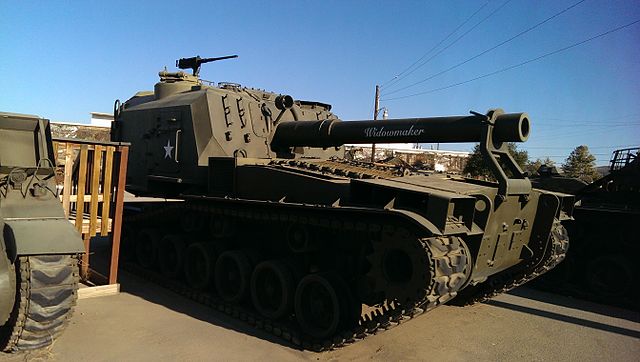 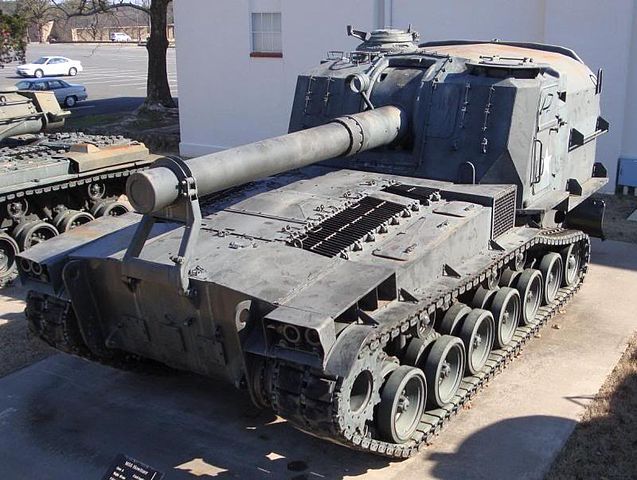 M55 stored in Camp Robinson as of today

Design-wise, the M53 and M55 were almost identical externally, their main armament and ammunition stowage dictating a very different internal layout. In 1956, converion of the M53's chassis into M55s were started in 1956 as the M55 found more use in the field. This conversion became a standard for the whole fleet of M53s but a few. Whereas the M53 saw a limited use in the US, and never saw action in Korea, the USMC retained it. The U.S. Army deployed the M55 in Vietnam, but it was soon replaced by the much lighter M110 8-inch self-propelled howitzer. M55s were however still used proficiently by the USMC in Vietnam, replaced in turn by the M110. NATO was soon interested, and the Belgian, Turkish and West German armies also received the M55 SPH. M55s were used in Vietnam but retired in the 1960s. The Belgian Army kept its M55 active until the 1970s.

The M55 Self-Propelled Howitzer was very similar in scope and function to the M53 SPG but centered around the 203.2mm M47 howitzer with limited total ammunition. Productionwent also to Pacific Car & Foundry until 1956. M53 systems were later upgraded to the new M55 standard. Protection was 25mm at its thickest and the 203mm M47 howitzer had a 17,000 meters range, far from enemy action, at least until better soviet-built SPGs were transferred to the NVA. Rate-of-fire was however limited to one round per two minute, stowage to 10 rounds, potentially two more in other places. This short supply immediately limited ts tactical value. powerplant was the same, using the M46 Patton's Continental AV-1790-5B 12-cylinder gasoline 810 hp coupled to the Allison CD-850-4 transmission. Heavy, it could manage 30 mph on flat, and for 160 miles. The late production had the AV-1790-7B engine/CD-850-4B transmission of the late M47 and steering wheel for the driver. 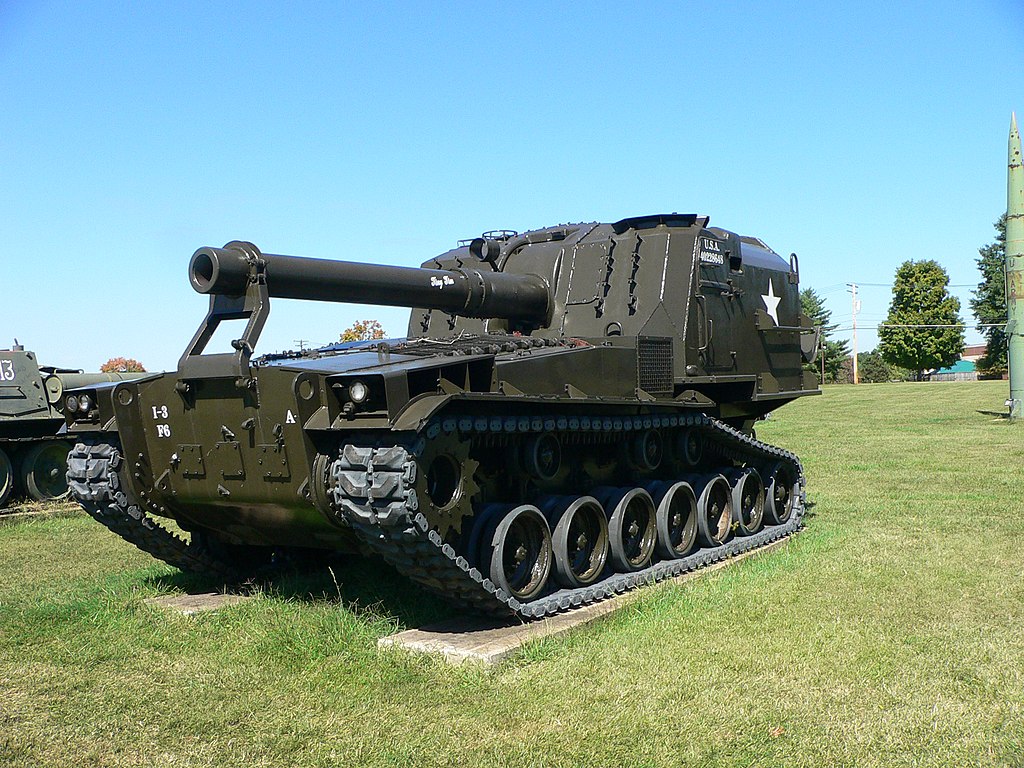 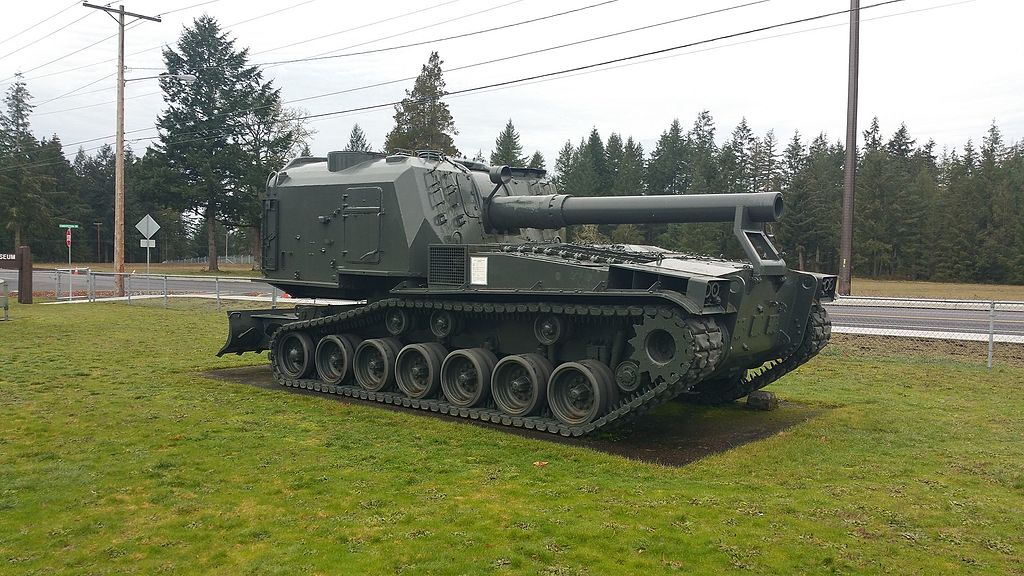 “Eve of Destruction”, 1st 8-inch Howitzer Battery USMC, Têt Offensive 1969
A modern replica is now visible at the Flying heritage museum. The M55 8-inch being offered, with a serial number unknown, needed a complete restoration inside and out and is now not in working conditions but externally perfect, bearing the insigna of the 1st 8-in howitzer battery in Vietnam. 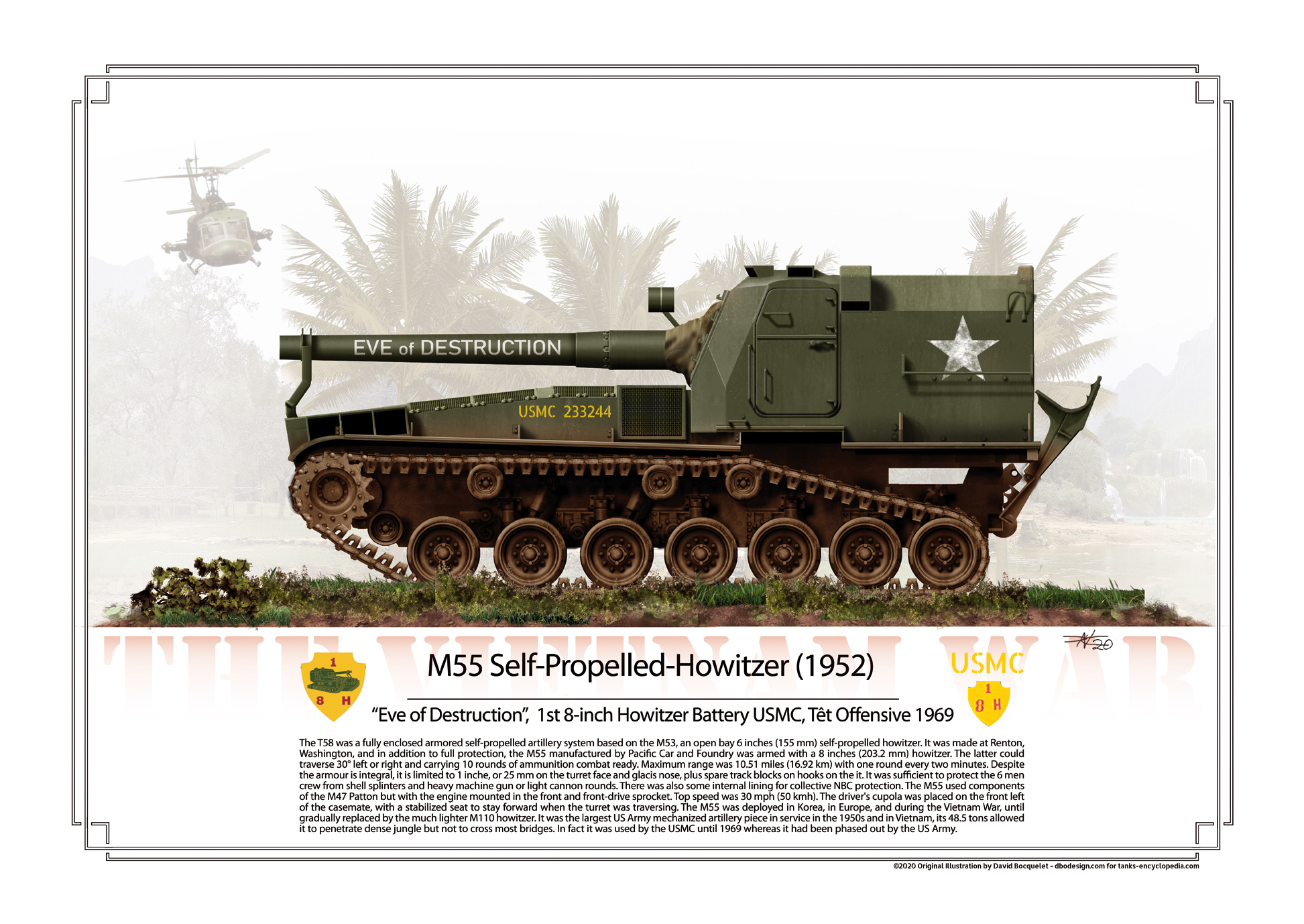