What could have been...

The T71 was a project from 1952 intended to replace the M41 Walker Bulldog. By 1953, there were several different prospective designs that could replace the M41 made by different companies - Detroit Arsenal, Cadillac, and AAI Corporation. In May 1952, the Army Ordnance Committee gave general characteristics for a replacement of the M41 Walker Bulldog. Originally, there was a 20-ton weight limit and a requirement for a 90mm gun. However, this soon changed to 18 tons and a 76mm gun which could have the barrel quickly replaced. In July 1953, at a conference in Fort Knox, several designs were presented.

Cadillac's design was one which did not seem to get very far off the ground at all. It was a more sensible and traditional design that Detroit's design. It featured the T185 gun, essentially the same 76mm M32 gun as the M41, but with a quick change tube. The vehicle was likely to be over 5.5 tons lighter, as it was estimated to weigh less than 18 tons. It had a crew of four - three in the turret (commander, gunner, loader), and a driver in the hull. It featured an AOI-628-I engine, with a fuel capacity of 150 gallons, with an estimated range of 150 miles. Detroit's design was somewhat more ambitious. It was an 18-ton vehicle with the same 76mm M32 gun. It would also feature an innovative oscillating turret which could fit 60 rounds, with 18 on a ready rack. The crew would only consist of three men, due to an automatic loading system. It would be powered by a 340hp AOI-628 engine, and the armor was no thicker than the Bulldog's 38mm.

There was also a third competitor for the design by Aircraft Armaments which became known as the 76mm Gun Tank T92. Its main feature was its small, flat turret, which drastically reduced the overall profile of the tank. It had a 76mm gun, and two turret cupolas for the gunners, each armed with .50cal machine guns. If that was not enough firepower, there was also a .30cal coaxial gun above the 76mm gun. The engine was at the front of the hull, offset to one side, and the driver sat beside it. It weighed little over 18 tons. All three designs were reviewed, but contracts were only awarded to the Cadillac Motor Car Division and to Aircraft Armaments. They were ordered to further develop the design and create full-size mockups. A scale mock-up also was completed for the Detroit Arsenal concept, but nothing came of this. There was an expectation that the finished T71 project would combine all aspects of the concepts together, but because each design was so intricately designed, it was simply not possible.
The Cadillac design was simply too conventional, with its small weight and long range, whereas the Aircraft Armaments tank was so innovative that it would be highly risky, even despite the potential for vastly improved performance. Prototypes or "pilots" would be built of both tanks, and they would be tested side-by-side to determine which one is best. The Ordnance Technical Committee approved these projects in March 1954 and in May the Cadillac version. Development continued on both tanks until January 1956 - the T71 project was canceled because of the rapid progress on the T92 and the lack of funds for such a project.

Sheridan, A History of the American Light Tank Volume 2" by R.P. Hunnicut

The Cadillac T71, as generally depicted. 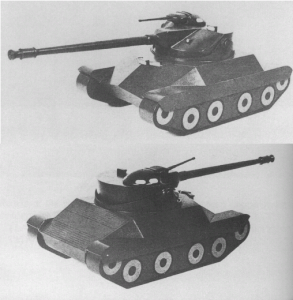