The Soviet Army's APC (armored personal carriers) never followed the path of the USA. While the latter realized an all-enclosed fully tracked model (which became the M113 after a long evolution) was more desirable after the controversial performances of the M2/M3 half-track family during the WW2, USSR rather produced wheeled APCs, either 6x6 or 8x8 with the current line ending with nowaday's bumerang, and which went through the BTR line. Their own attempt as designing a fully tracked APC however emerged soon enough in the late 1950s when they expressed the need for a multi-purpose fully amphibious auxiliary armored tracked vehicle, which comes to be the MT-LB.
This program ended on a single vehicle, the MT-LB which was not only in service for most of the cold war but continues to serve as of today, in Russia and around 20 countries through dozens of variants and sub-variants, since it was constantly upgraded and never really replaced. Production is estimated today around 9,000, well below what could be expected of such cheap and modular vehicle, or comparable "universal carriers" of the past like the Vickers Bren carrier or French UE. MT-LB means Многоцелевой Тягач Легкий Бронированный or Mnogotselevoy Tyagach Legky Bronirovanny: "Multi-Purpose Towing Vehicle, Light, Armoured".

Development history of the MT-LB

The Soviet Central Auto and Tractor Directorate started a development program to replace the AT-P series. The latter were artillery tractors based on the ASU-57, and at least in spirit, in the same lineage as the WW2-era T-20 Komsomolets tractors. The MT-L was tailored to meet the requirement, but based on the sturdier PT-76 amphibious light tank chassis. From this, two vehicles were created: The MT-L, unarmored and the MT-LB, armored, and we will concentrate here on the latter.

Design of the MT-LB

What was most obvious about the MT-LB was its low-silhouette. The hull was box-like, all in welded steel. The crew compartment was placed at the front, large enough for a driver and co-driver which can be swapped with a ball-mounted machine gun or more commonly with a turret on top of his position standing. The engine was placed immediately behind, on the left side. The troop compartment took all the rear space, with two access doors at the rear and roof panels. The ten infantrymen sat on inward-facing folding canvas seats. The hull roof was given two forward opening troop exit hatches which can be also use to fire upright on the move or jump out of the vehicle. 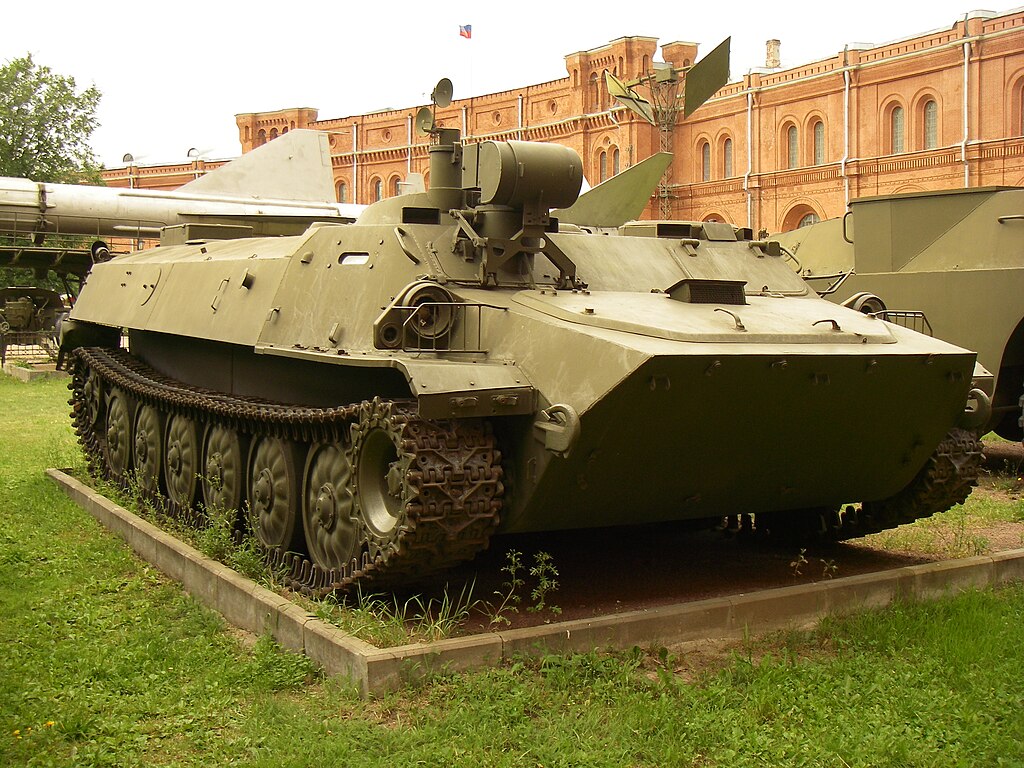 There were two side firing ports and one more on each rear doors, four total. The co-drive small turret next to the commander's position housed a small 7.62mm PKT standard machine gun. So this, and the Infantry's own weaponry (Kalashnikov, hand mortar, MANPADS) were the only armament of the MT-LB in APC configuration. However with time, the vehicle proved very adaptable to a whole range of armament (see variants below).

The vehicle was protected by a 7 to 8 mm armor plate at all angles, however the turret front and frontal arc nose armor was 0.55 in (14 mm) thick, enough with the sloped armor to deflect heavy MG rounds. NBC collective protection system was standard, with internal spall lining.

The MT-LB is characterized by flat-track suspension consisting of six road wheels with no return rollers but it can be fitted with extra-wide-track (565 mm wide vs 350) with an "aggressive" grouser for snow/swamp normally impassable ground. This version is designated MT-LBV and the new tracks helps reduces ground pressure from 0.46 to only 0.28 kg/cm2. Also used by local population of Siberia around Irkutsk, it is the only way to travel in these untamed wilderness.

This is fundamentally multipurpose vehicle. The APC/command vehicle house ten personnel whereas the core crew comprised only two, the driver and commander-gunner side by side. The MT-LB was also defind as a tractor, prime mover for most field artillery types and wheeled mortars in service. The artillery crew is ranging from six to ten, with partiam ammunition storage. It was the default first-line 100 mm AT gun T-12 tractor, organic to motorized infantry divisions. It was aolso used as a supply vehicle with a cargo capacity of 2.0 metric tons, and was capable of towing up to 6.5 metric tons. 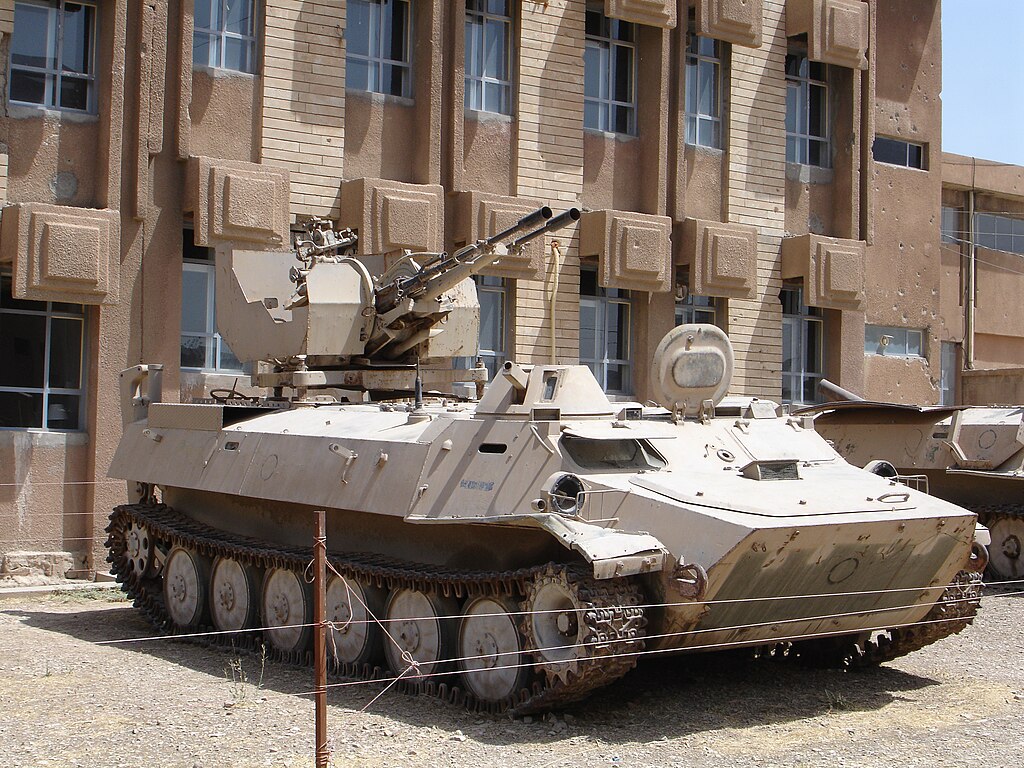 Production of the MT-LB

The MT-LB entered production in the early 1970s. Like other Soviet vehicles it was cheap to build and reused as much common equipments as possible. The engine was originally developed for trucks and already present in very large quantities. The Kharkiv Tractor Plant was charged of the production. After the collapse of the USSR, production resumed, mostly to developed an IFV and many new specialized vehicle. The MT-LBV is now a familiar figure in Siberia. It is even the main transportation system on these immense wilderness devoid of any road, frequently unarmed and used for daily civilian purposes. However two foreign (Warsaw Pact) manufacturers acquired a licence to built it.

in turn manufactured the type in 1980, and declined it in eight versions and sub-variants plus a national IFV (Infantry Fighting Vehicle) which remained relatively confiddntial, called the BMP-23, and a BMP-2 turret variant called the BMP-30.

Polish HSW S.A. (Huta Stalowa Wola S.A.) license produced MT-LB since 1976. The polish SPG-2 has a completely revised chassis with better floating capabilities. Poland developed six main variants and many sub-variants. Nowadays Poland only retained about 15 vehicles in service, but Finland is by the far one of the largest operator of the vehicle which is snow-friendly. Finland indeed has in its inventiry recently about 389 MT-LB/v and 50 MT-LBu.

Operators of the MT-LB

By far the largest operator of the vehicle. 3,300 are listed in active service. Many new variants were developed, including an IFV. The latest is the MLBSh for the Marines with more powerful engines KAMAZ-740.50 of 360 hp and many other modifications (see the illustrations). USSR used to operate at least 6,000 vehicles. They were passed onto the successors states. Ukraine alone operated some 2,090 MT-LBs of all variants, Azerbaijan about 336, Bulgaria still 100 (mostly IFVs), Belarus 70, Georgia 66, Kazakhstan 150, Lithuania 10, Moldova 60. The Czechoslovak Socialist Republic also operated numbers (no source), now the Czech Army. Hungary operated Strela-10 and SNAR-10 vehicles. Yugoslavia also operated them (unknown quantities), used during the war by Croatia (now all sold or scrapped) although Macedonia still operated 10 recently.

Iraq acquired some 400 MT-LBs. Post-Saddam, the country developed its own version of the "Siberian" version MT-LBV, with wide tracks for marshy area around the Tigris. Iraqi MT-LBs were also converted as SPAAGs, with a ZU-23-2 23 mm twin mount. A familiar sight during the war against Al-Qaida, many were also captured and reused by the latter. There was a ground support variant with a ZU-23-2 mounted on a platform extending beyond the hull, while the gun servants were protected by a roof. These too saw heavy actions against ISIS.

Used to modify stock vehicles and acquired 721 Bulgarian-made MT-LBs. In addition, they operated 32 SNAR-10 and 36 Strela-10M from USSR. After the Unification, they passed to the successor state and were stockpiled. Eventually a custmer presented itself, Sweden.

Surprising as the country's neutrality tradition rather veered towards NATO, Sweden acquired these precious German (Ex-Bulgarian) vehicles in 1993. These 460 vehicles were named the Pansarbandvagn-401 series (7 variants) and were rearmed with the Swedish Machine-gun of NATO caliber, 7.62 mm. So far, Sweden has deactivated them, after 147 were still in the inventory in 2011. All the others were resold to Finland.

Other countries adopted the type, either from Russia or second-hand Polish/Bulgarian vehicles. Countries includes Armenia, Angola (8),
First written by David Bocquelet in 2018

The MT-LB in combat

About the Siberian version (Ru)