The West German Army of the Cold War invested considerable efforts into anti-armor capabilities. Soviet tanks indeed were so numerous (estimated as high s 20,000 in 1985) any war in the West would likely turn to a 1 vs. 10 match, even with NATO's US and British reinforcements. Like in WW2, accent was put on quality rather than quantity, resulting in the the excellent Leopard 2 in 1978. However this was still not sufficient and one of the key developments for Bundeswehr armor at that time, were anti-tank missiles, enabling to out-range and defeat any incoming tank.

In the 1960s in partnership with the company Nord Company from France, Bolköw developed the SS-10 missile for the Bundewehr. Soon, the SS-11 appeared leading to two generation of missile tank hunters, namely called Ratekenjagdpanzer or "rocket tank hunters", developed on existing chassis like the HS.30. The RktJpz-1 and 2 were produce din the hundreds but in between technology went on.

After the Raketenjagdpanzer missile-armed tank hunter, NATO standard HOT antitank missile appeared, requiring extensive modifications of the vehicle, leading ultimately to develop a brand new vehicle, the Raketenjagdpanzer-3, better known as the "Jaguar". The latter served until the end of the cold war and beyond after modernization, but for the most the whole park is now stored. Only the Jaguar-2 stayed semi-active for training in the 2000s.

Design Development of the Jaguar 1

After the Raketenjagdpanzer-1 based on the Spz Lang HS.30 IFV chassis, a new vehicle armed with the French Nord SS-11 antitank missile (more powerful, reliable, faster with better range) and a better frontal armor, from 30 to 50 mm was introduced in 1966. It was abbreviated RktJgPz-2 and indeed every bit a superior machine, in service until the early 1980s. It was co-produced both by Henschel and Hanomag, and 318 delivered to the Bundeswehr.

However missile technology was developing fast. The French Nord SS 11, first designed in 1953, in 1970 started to appear already obsolescent. Already, both France and Germany worked in concert on a second-generation antitank missile, called "Hot". It was led by respectively Aérospatiale, in which Nord was aggregated, and MBB, which integrated the assets of Bölkow. The partnership proved a long lasting success, also generating in the same decade the MILAN and the Roland, both NATO's trusted weapons systems until and after the fall of the Soviet Union. Former companies merged into the modern Euromissiles in the late 1970s. The consortium comprised DaimlerChrysler Aerospace AG and Aérospatiale and was instrumental in the development and success of the Hot missile. Without it, notably, the Bundeswehr would have discarded its Raketenjagspanzer. Rearmed with the new missile required a radical upgrade, which led to the Raketenjagdpanzer-3.

The "Jaguar 1", or Raketenjadgpanzer (RakJPz 3), was still a compact tracked armored vehicle. Its Anti-Tank Guided Missile (ATGM) launcher took most of its central section. The Jaguar 1 at first the existing stock of SS.11 missiles, later made obsolete. Eventually 316 of these SS-11 vehicles were converted to the Jaguar 1 standard from 1978 to 1982. The single Euromissile HOT ATGM launcher had eight redy rounds fire reload, and twelve more reloads carried inside.

The vehicle weighed 25.7 tons, for an overall length of 6.6 meters, a width of 3.12 meters, and a height of 2.55 meters. Its crew of four comrpised the front driver, a commander, the gunner and missile loader.

The HOT development started in the 1964, and followed the path athat would led the US to devise the TOW. The latter was ready in 1973 but the HOT's testing phases were still not over. It was only approved for service in 1977 and soon started to be a staple of AT missiles in france, Germany and soon in other countries as well, 19 il all. The body was mostly the same, but the shaped charge warhead evolved as well as guidance with more modern electronics. Soon, it allowed the Bundewehr to update its Raketenjagdpanzer 2 fleet with a single retractable single Euromissile K3S launcher, and 20 HOT missile in reserve.

Performances are impressive, with the HOT-3 capable with a 6.48 kg tandem HEAT to defeat 1250 mm equivalent armor, so the ERA protection and hull behind of any Soviet tank, including the T-72. Even the latter cannot engage targets accurately above 1,200 m. For memory it had a mean error of 1 m (39.4 in) at a range of 1,800 m (1,968.5 yd). Due to the rapid reload of the launcher, the Jaguar-1 is therefore capable of knocking down at least six T-72s frontally before they came into range.

The chassis was basically emerging from a common program for varuous platform, and ended produced into the thousands. It was shared with 1971 by the Marder IFV. The chassis comprised six evenly-spaced roadwheels resting on torsion bar suspensions, with three return rollers per side as a rear drive sprocket and front idler. The powerplant consisted in the same 29,4l MTU MB 837 Aa V8 water-cooled multi-fuel diesel developing 500 hp (368 kW).

The armored hull had a simple prismatic shape with rolled RHA plates and sloped sides. Armour thickness reached 50mm at the front glacis and critical parts. On the upgraded version with addo-on armor it was 50+20mm at the front, 30+10mm on the sides, 30mm hull sides & rear (no addon armor), 20mm on the frontal roof slope and 10 mm on main roof, plus 5 mm on the engine deck & the side skirts which came actually from the Leopard A1A1.

The secondary armament comprised two 7.62mm MG3 medium machine guns for close defense: One was place din the glacis plate, right side in a ball mount. The second was manned by the commander from his cupola. In addition eight Smoke grenade dischargers were placed on the flanks, for self-screening. The long front glacis was occupied by the driver, the fighting compartment in the rear section was occupied by the gunner and loader side by side, the commander was seated on the right. For the 12 missiles in storage, with two missile launch systems above on a telescopic and folding arm to keep low profile or going under bridges. It was raised up to fire the missile inside its canister.

By 1978 the Raketenjadpanzer-2 was obsolescent and after the upgrade, the whole series was renamed Jaguar-1 (Raketenjagdpanzer 3). Protection included frontal add-on armour and sides plus new side skirts, and the HOT missile system, the conversion ending in 1982. The Jaguar-1 stayed in service with the Bundeswehr until the 1990s. The Raketenjagdpanzer-4 Jaguar 2 was a completely other beat, resulting of the conversion of 162 Kanonenjagdpanzers in 1982-85. The modernized Jaguar 1

The Jaguar 2 rocket tank destroyer received a new steering system and a high-performance thermal imaging system in 1993/95 as part of a second major ugrade. This increased the efficience and accuracy of its HOT3 missiles in bad weather and by night. This resulted in the Jaguar 1A3 standard which in all sense replaced the older TOW-armed RakJPz 4 "Jaguar 2". Logically also it was the last Bundewehr missile armed tank huner in service,

Raketenjagdpanzer 2 in the 1960s, to compare. 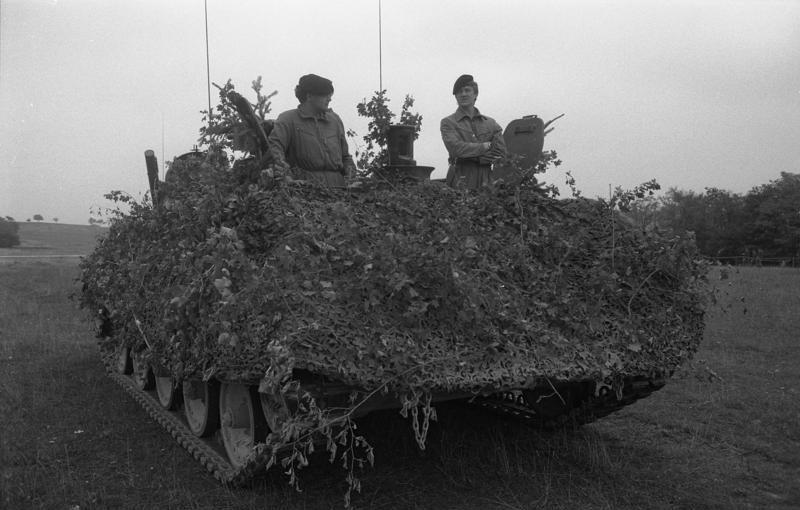 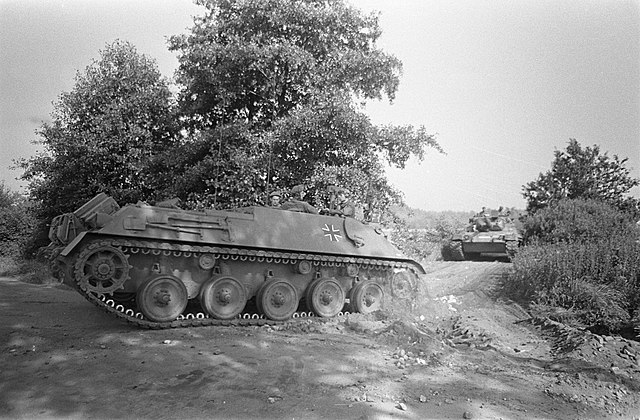 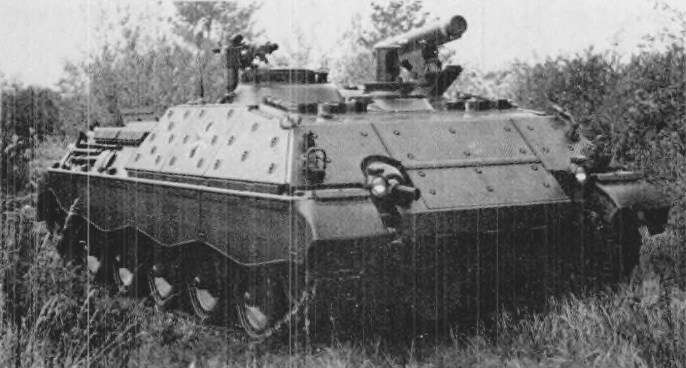 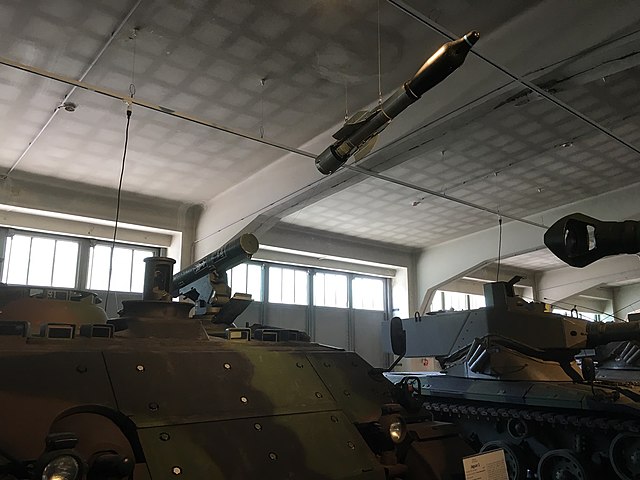