The Marder project was developed as early as September 1959 during the early phase of production of the HS 30. The aim was to develop an equivalent to the Leopard 1 armored infantry fighting vehicle. The ATV staff (training, technique, experiments) of the Panzertruppenschule Munster created the military demands with the following characteristics: It was also intended to create a whole armored infantry vehicle family, with a modular armament, ranging from AT rockets, to antitank mortars, medical armor, transportand supply, anti-aircraft and FlaRak plus SPAAML. However it was intended for the Panzergrenadiere, which had their own way of fighting, leading to refine further the concept. In fact, two lined of development started, one of cannon-armed tank hunter and another of ATGM tank hunter separately. They were concluded successfully in 1967. https://de.wikipedia.org/wiki/Marder_(Sch%C3%BCtzenpanzer)

In January 1960, the Rheinstahl group which comprised Rheinstahl-Witten, Hanomag, and an engineering office at Warnecke and Henschel AG (Thyssen Industrie AG at Kassel) were contacted as well as MOWAG to develop seven prototypes each. Immediately Henschel presented a derivative of the HS 30, soon followed by the other two groups that used the same blueprint. These first gen. prototypes were the RU 111, RU 112 and RU 122 (Rheinstahl), 1HK 2/1, 1HK 2/2 (Henschel) and HM 1/2 (MOWAG). They all respectd the combat limit of 16 tons. Meawnhile, NATO started to be interested and made some proposals and the US Army made some proposals, itself looking for a beter armed replacement for the M113, which would eventually led to the development of the Badley. The one-time US-German partnership for a common armored infantry fighting vehicle failed, just as the next MBT program will. After a serie of comparative tests with these early two-three prototypes In 1963, demands for a second generation led to redefine a model weighting about 20 tons. Rheinstahl built and sent the RU 214, 261,262 all larger, with front engine and upgraded features and a 20mm automatocannon turret plus ATGM. MOWAG released soon the 2M1/1, 2M1/2 and 2M1/3, all with a mid-mounted transverse engine. New tests were performed this year, leading the staff to create new demands. The 1964 batch of third generation IFVs meant the vehicles has to be longer and wider, with rear-mounted MG and pistol ports for the infantry and better protection overall. But at least previous tests secured the solution of a combined one-man autoannon turret with ATGMs and there were no changes, at first, until it was asked to develop a two-man tower with a crest-mounted machine gun whereas the vehicle's armament module remained the same. In 1967, the fourth generation IFVs represented another combined batch of ten prototypes, extensively tested with troops in the field and in all conditions. MOWAG retired in 1968, not capable of providing a satisfying ATGM solution. In 1969, a contract was awarded for the supply of 2136 IFVs and the first production vehicle was scheduled to be delivered on 7 May 1971. The Panzergrenadiere had their new IFV, a real step up compared to the earlier HS.30. For production, Rheinstahl AG and Maschinenbau Kiel (MaK) were contracted both.

In 1977-1979 a first combat value upgrade consisted in installing on all vehicles the ATGM MILAN, either fixed on the vehicle of carried by the Panzergrenadiers in the open. However due to the prevision for four missiles the carrying capacity for infantry fell to six men.

From about 2008, three old Marders were converted by the company Airmatic systems in Hemer into fire-fighting tanks (with and without extinguishing arm). The final result was presented at the Interschutz 2010. However Airmatic systems filled a bankrupcy in 2011, and the whereabouts of converted vehicles is unknown.

The Marder in service

Prototype of the Marder 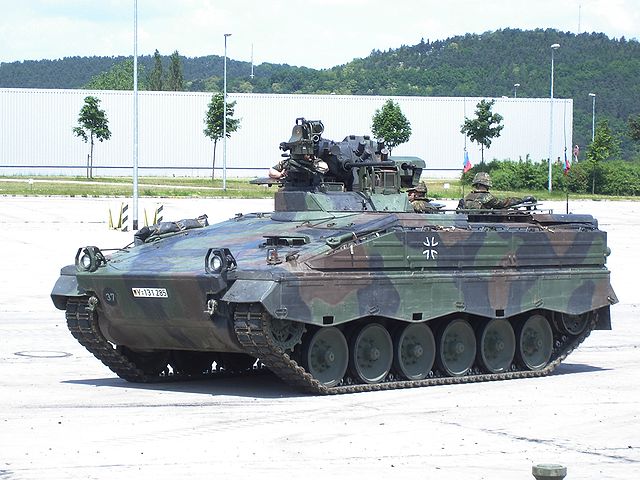 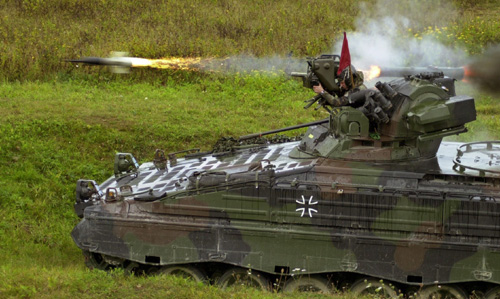 Marder 1A3 firing a Milan. 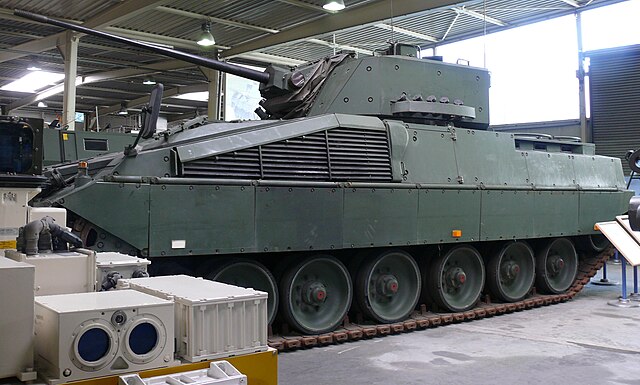 Marder 1A2 in manoeuvers. 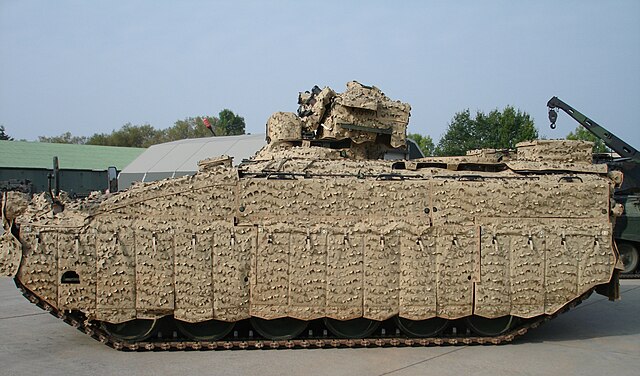 Marder 1A5 with the Barracuda camouflage