It has been coined as the "most powerful howitzer in the world". The 2S7 Pion is indeed a formidable piece of mobile ordnance, tracked, which allows it to pass over the most impassable terrains. However, like many large guns from that era, the servants are not protected at all and once in place, the traverse is quite limited, if not at all. Nevertheless, the 2S7 remains in limited service with the Russian army and many still serve abroad. It was called M-1975 by NATO (like the 2S4 Tyulpan) and official designation was SO-203. The Pion name is that of the "Peony" flower, but the 2S7 (GRAU designator) is also called Malka. 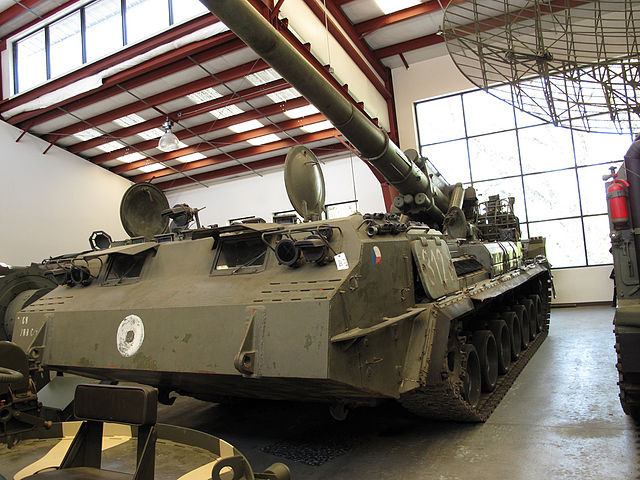 Back in the 1950s, the first Soviet artillery systems armed with nuclear warheads were the 2B1 and 2A3 self-propelled guns. But these systems were cumbersome and not agile enough to meet the Soviet Army requirements. The rapid development of missile weapons was later stopped on the orders of Khrushchev. By the spring of 1967, he made a preliminary design request for a new heavy-duty self-propelled artillery unit based on the tank "Object 434" and a wooden mockup. The result was fully enclosed, with a conning-tower made by the OKB-2 design bureau, but it received negative feedback from the representatives of the Ministry of Defence. On December 16, 1967, research studies began to determine the shape and the best basic characteristics of the new SPG. Object 216 was a prototype for a Soviet 203-mm self-propelled gun artillery for the Supreme Command. It was developed at the Leningrad Kirov "Barrikady" plant and the chief designer of the chassis was N. Popov. The 203 mm 2A44 howitzer was developed by GI Sergeev.

Emphasis was put on the maximum firing range, no less than 25 km. The Artillery Academy Mikhail Kalinin presented designs of several SPGs with a 210 mm gun S-72, 180 mm gun S-23 or 180 mm coastal cannon MU-1. The most suitable solution from a ballistic point of view was found to be the S-72. However, the "Barrikady" plant, in order to make use of its already existing tooling, preferred compatibility with the B-4 and B-4M and suggested to keep the 203 mm gun, which was later approved. The choice of chassis and the layout of a multi-purpose tractor MT-T (T-64A) gave the "Object 429 A", and the heavy T-10 based, "216.sp1". It was decided in the end to develop a new chassis with common parts to the already existing T-80 and T-72.

The final design was approved in July 1970 and in 1973 the tactical and technical requirements were approved. The required gun range was 35 km, and it was able to fire 110 kg HE rounds, but also the nuclear 3VB2 D-4M special ammunitions. The "216.sp2" was built from 1973 to 1974, leading to two prototypes 2S7, sent to the testing grounds at Struga Red. In 1975, the "Peony" was officially adopted by the Soviet Army and in 1977 supplies of nuclear ammunitions had been received.

Production started in 1975 and lasted until the collapse of Soviet Union. It is estimated that well over 500 have been completed, with 360 older vehicles passed onto the Russian Federation and Eastern European countries, or new independent republics. In 1990, Soviet troops were given to the last batch of 66 2S7M machines. Unit cost at that time was 521,527 rubles and many modifications were made during these 16 years of production. Modernization under the code "Malka" (2S7M) started in the 1980s with the 84B multifuel engine and changes to the engine-transmission compartment. In February 1985, an upgraded chassis was tested as well, and the range was superior.

Digital displays with automatic data reception were later received and ammo storage modified, up to 8 rounds. The loading system was also possible vertically. The vehicle could fire up to 2.5 rounds per minute. New control equipment was also adopted for the electrical and hydraulic power units. The crew was reduced to 6.

The basic design is based on the T-80 chassis, modified to carry an externally mounted 2A44 203 mm gun. It has hydraulic spades at the rear, used to moderate or stop the recoil when firing. The commander, gunner and driver/mechanic are seated in the front driver's compartment, with circular roof hatches, and day periscopes in addition to the folding shutters. Just behind the engine is the secondary crew compartment, which the remaining four crew members can access through two circular roof hatches.

Despite the crew being carried by the vehicle, only four of the eight ammunitions round have to be carried separately. This SPG was intended to fire 1 or 2 rounds before leaving for another firing position even before the first round hits target, 47 km away. A shoot-and-scoot capability to avoid counter-battery fire.

Protection for the crew (front compartment) was assured against small arms fire and shell splinters on the frontal arc, but the operating crew, either mounted or on foot, was not. Individual armament comprised several Kalashnikov and a single MANPAD. The front compartment was also provided with an NBC system of the overpressure type, a heater and night vision equipment. There was also a 24 hp 9R4-6U2 auxiliary power unit. The gun operator was seated at the rear of the vehicle on the left side and given a PG-1M panoramic day telescope plus K-1 collimator.

The V-46-I V-12 liquid-cooled diesel engine is coupled to a manual transmission, eight speeds. It is located to the rear of the front driving compartment, while the rear chassis was dedicated to the weapon system. The suspension consists of seven dual rubber-tired road wheels plus six track-return rollers per side. The drive sprocket was at the front and idler at the rear. Shock absorbers are installed on all but the 4th and 5th roadwheel stations. Deployment procedure consists in lowering the chassis and deploying the hydraulic rear recoil spades. Top speed (road) is 50 km/h with about 600 km range. It can overcome a trench of 2.5 m and a vertical step of 70 cm. 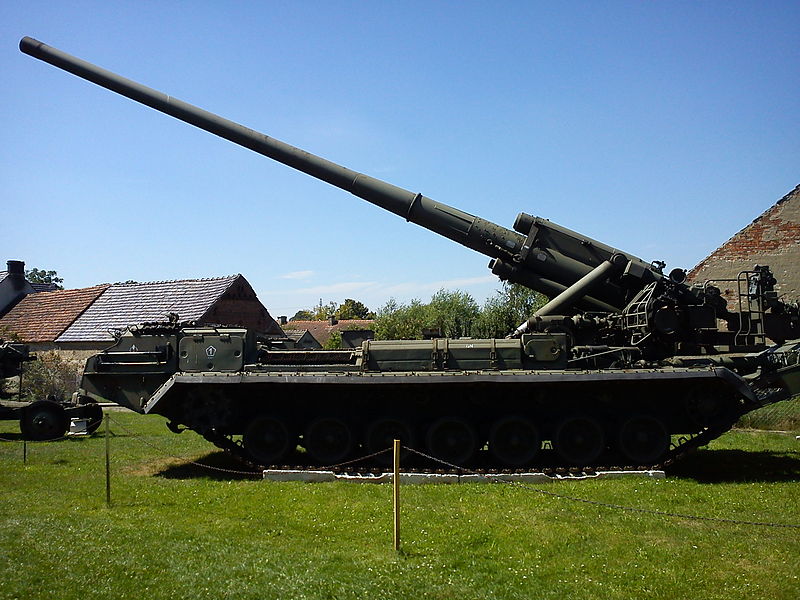 The 2S7 in action

The new artillery system entered service with divisions of the Supreme Command Reserve artillery to replace the 203mm towed howitzer B-4 and B-4M in the 1980s. These guns were waiting for a long overdue retirement.

The 2S7 was intended to suppress rear line posts, destroy critical facilities and as a means of nuclear attack in a tactical depth of 47 km. It takes 5 to 6 minutes to come into action and 3 to 5 minutes to come out of action.

In the Soviet army, the 2S7 was never used in combat but trained intensively and after the signing of the Treaty on Conventional Armed Forces in Europe, they were relocated to the Eastern Military District. About 6 were deployed in South Ossetia by Georgian forces in the Gori district. One was seized as a trophy and the others destroyed by Russian Forces.

- 2S7M Malka (1983): The Pion-M had the R-173 communications equipment and could carry eight 203 mm projectiles and charges. The rate of fire was increased to 2.5 per minute.
- BTM-4 trench digger, based on Pion chassis. In 1997, the engineering trench digger BTM-4M "Tundra" was commissioned.
After 1990 the Kirov plant carried out a program of conversion from its military technology, and the 2S7 was also turned to civil engineering. In 1994, the SGK-80 crane appeared, and its modernized version SGK-80r came out in 1998. They weigh 65 tons with a lifting capacity of up to 80 tons. The CM-100 was also designed to manage railroad maintenance, and carry out rescue operations after disasters.

Kazakh 2S7 as of today

Modern Russian 2S7 as of today 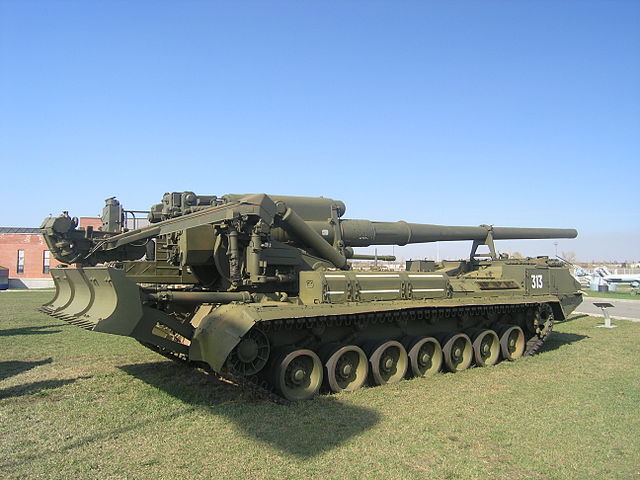 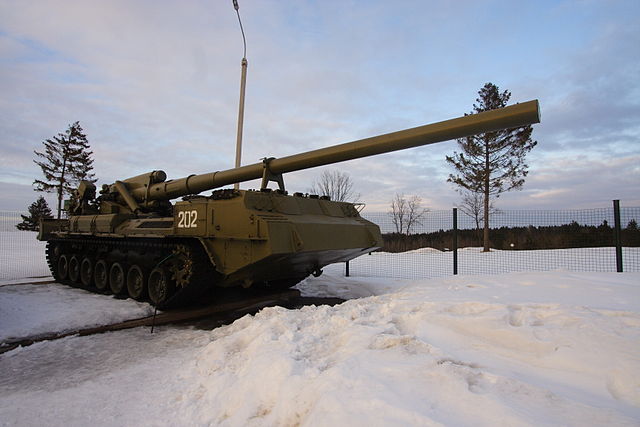 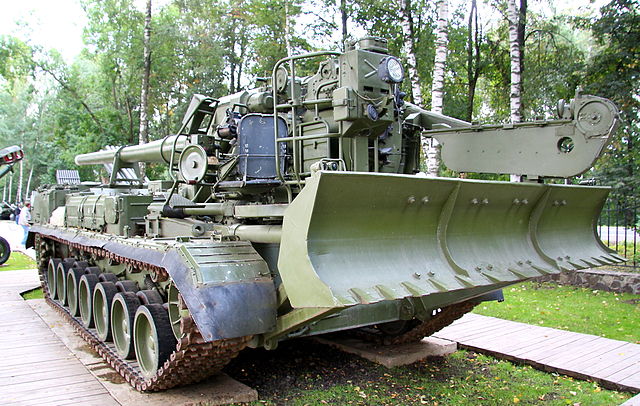 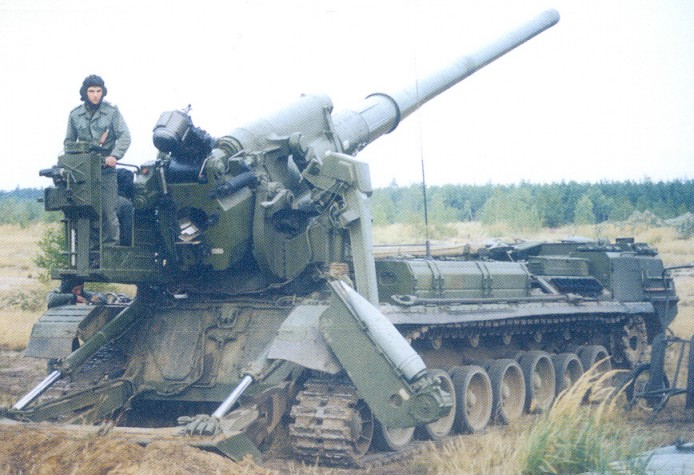 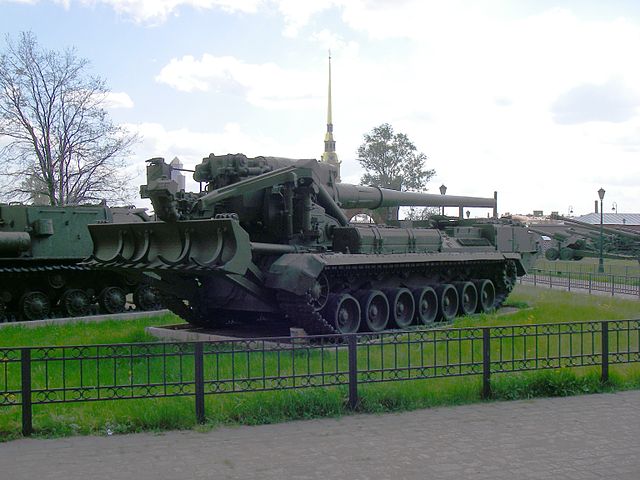 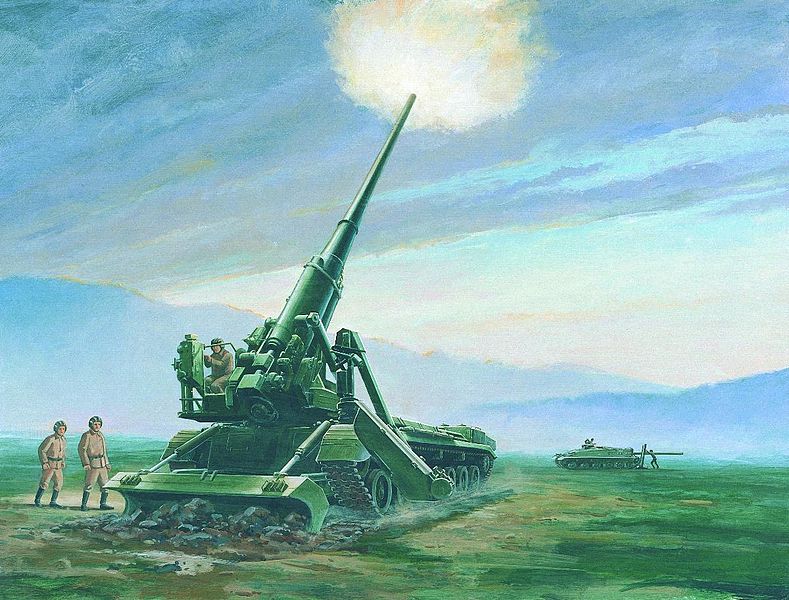 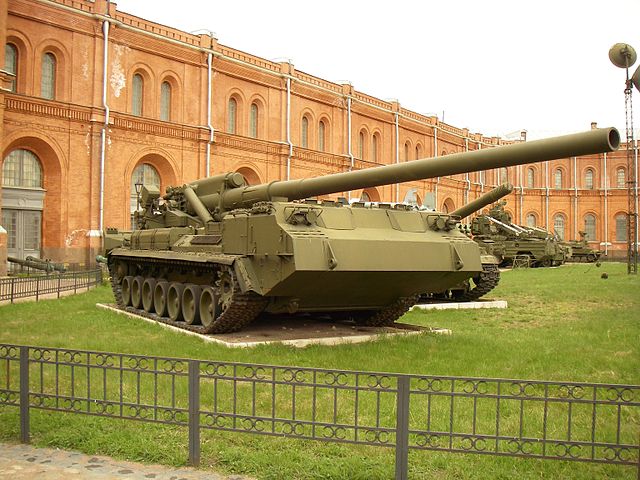 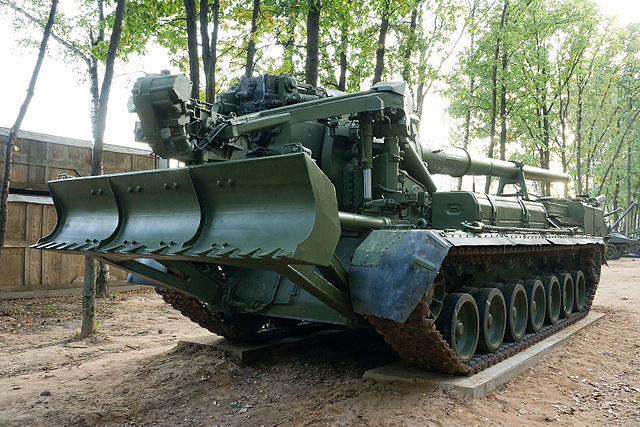 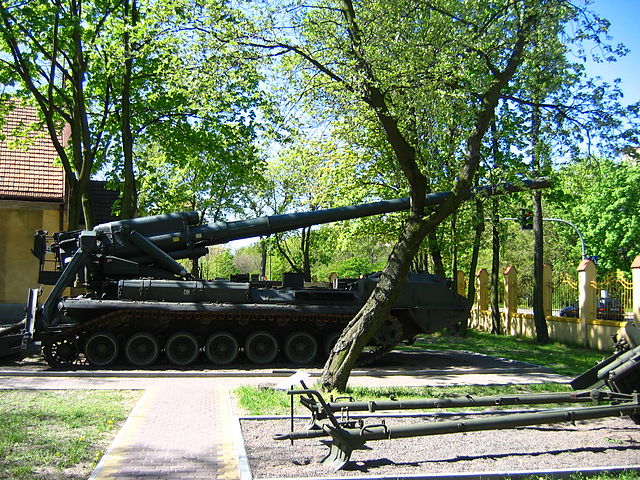