The MT-LBu also called "M1974" in NATO was an Artillery Command and Reconnaissance Vehicle of the Soviet Army, based on the MT-LB multipurpose transport/prime mover.

Developed from the MT-LB

The MT-LBu (IV12 series) also called "M1974" was derived from the regular MT-LB, Swiss knife of the Soviet Army, but taller and more spacious, with a completely redesigned nose, simpler straight front plate instead of the two-piece beak of the MT-LB. It also had a more powerful engine, 40 cm higher hull and longer chassis with 7 road wheels. They both derived from the light transport and prime mover MT-L, unarmored, turretless and developed for geological research in the far north at first.

It's origins laid in the 1968 request from the Soviet Central Auto and Tractor Directorate to launch a program to replace the old AT-P artillery tractor based on the ASU-57 with a new generation. It was developed in the Kharkov Plan as Ob'yekt 10. The MT-L was developed based on the PT-76 chassis and the MT-LB was in short, the armoured variant, entering production in the early 1970s and cheap. It used for example a standard truck engine and as many available "off the shelf" components as possible. The MT-LBu was at first designed as a larger and unarmed version to be declined in many specialised vehicles from the start.

The MT-LBu was manufactured at the Kharkov tractor plant but also later in Poland under linence at Stalowa Wola and in Bulgaria by Beta JSCo. It became the common communication/fire direction/signal vehicle of the Warsaw Pact in the 1980s and until the fall of USSR, spawining a total of 42 variants, all specialized (see below).

The MT-LBu has the same amphibious capabilities as the MT-LB, propelled in the water by its tracks. Its lower silhouette was still taking advantage of the original flat-track suspension with seven, not six six stamped steel roadwheels, and still no return rollers. Thus the chassis is longer by the addition of an axle, making the taller rear compartment also longer and thus, roomier. It still used a box-like welded steel plating, but simplified, making for a slightly better front crew compartment.

The side section was flat at the drivetrain section, but went up in an inverted slope, meeting the lower edge of the upper sloped section of the rear compartment. The rear plate was essentially flat, just slighty sloped. Towards the front, the side was flat. There was a single side hatch aft, but in most cases it was simply welded shut. There were a left side access door on this back plate as well as a central, larger hatch. The interior was roomy but still not authorized crew members to be standing. Accomodations depended of the version, and so the potential uppoer hatches. Armour thickness was assumed to be the same as the MT-LB, 8 mm on the sides and rear, enough to resist small arms fire and shrapnell, and a 15 mm front section to withstand heavy machine gun fire.

The basic version had presented a single-plate driver compartment, with two armoured shutters and two roof hatches, opening backwards. The was a "turret" aft of the rear compartment for a gunner, fitted with a ring mount for the standard KPT HMG. This was, outside personal weapons of the crew (which varied among versions, the basic vehicle carried up to six passengers aft), the only armament. Most versions were unarmed.

The engine was unchanged in its location, placed immediately behind on the left side. The "troop compartment" in this version at the rear had inward-facing folding canvas seats for 6 infantrymen (10 on the smaller MT-LB), reflecting its multipurpose nature. No variant is used as a troop carrier. There are no firing ports. For protection, outside the armour, the vehicle has a collective NBC protection system. It carried no smoke dischargers however.

For mobility, the MT-LBu is powered by a heavy truck engine YaMZ-238N, V-8 diesel rated for 300 hp at 2,100 rpm. The MT-LBu can employ the same extra-wide-track with "aggressive" grousers as its little brother for snow and swamp operations and has the optional 565 mm wide track available (compared to the normal 350-mm-wide track). Ground pressure is thus quite reduced. It can reach 61.5 km/h on road, 30 km/h off-road and 5-6 km/h (in the water), moved by using its tracks. But there are no direction capabilities.

Use as a cargo vehicle its capacity of 2.0 metric tons and it is still in theory able to tow loads exceeding 6.5 metric tons, but there are no tractor/prime mover versions.

A basis for many derivative versions 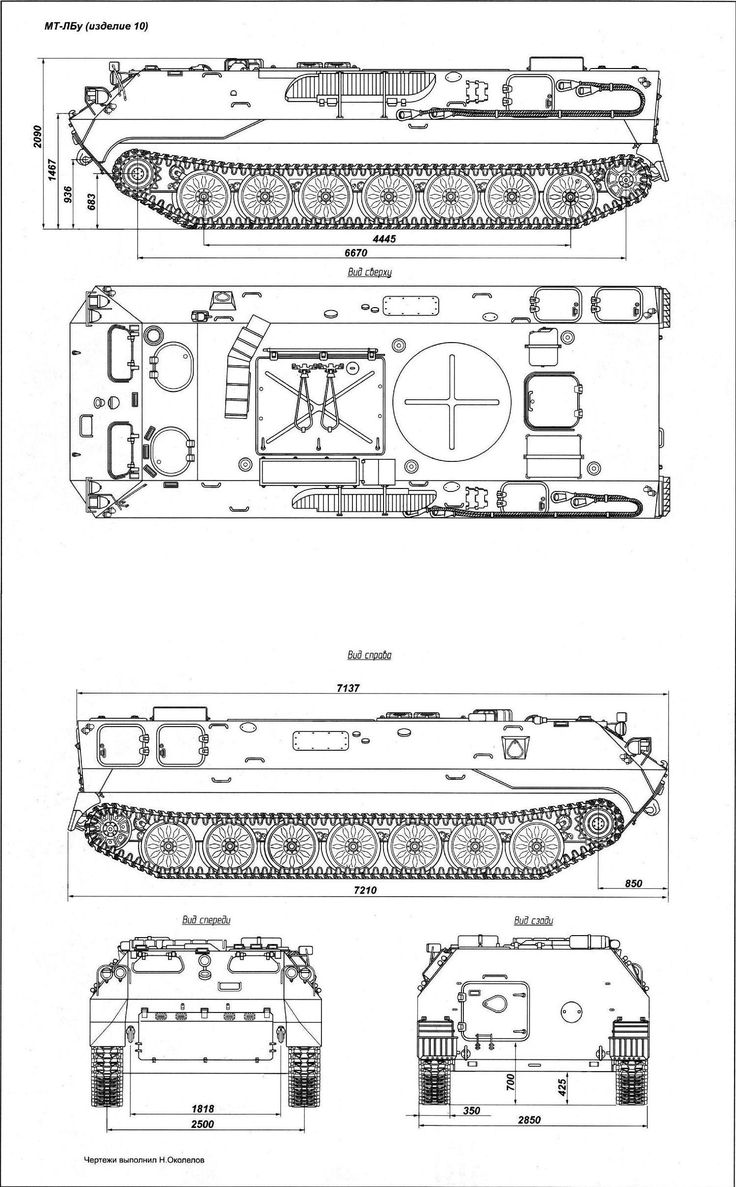 The artillery command and reconnaissance vehicle (ACRV) Ml974 was first observed in 1974, hence the NATO classification. It was presented at the same time along with the 122-mm and 152-mm self-propelled howitzers based on it. Their high degree of mobility thanks to larger tracks and a more powerful engine, allows these to operate closer to the front, supported maneuver.

The automation of gunnery computations offer faster responses and greater flexibility. Centralization of fire computation and control at battalion level reflected the doctrinal changes of the time regarding the battalion rather than the battery as the basic firing unit. Artillery Computing was thus made available to each battalion while fire direction was less work intensive. It was really a progress in the Soviet Army at the time, compounded by other innovative vehicles like the T-64, BTR-70 and many specialized variants.

The suspension consists of seven road wheels with no support rollers. The high, box-like reinforced aliminium hull has a steep glacis at the front and a flat, round turret on the rear half. The straight vertical rear of the hull contains a single exit door. A total of three or four antennas may be mounted on top of the hull. The ACRV M1974 (1) normally has a 12.7-mm DShK antiaircraft machine gun on a swivel mount atop the turret. The ACRV M1974 (2) turret mounts a laser rangefinder, optical observation devices, and associated fire-control equipment.

From the basic version, the ACRV M1974 (3) mounts a 12.7-mm machine gun and digital fire-direction computer while the (1) and (2) versions had a rectangular box projecting from the right side of the hull below the turret. The artillery command and reconnaissance vehicle shared the chassis with the 122-mm self-propelled howitzer 2S1 Gvodzika. 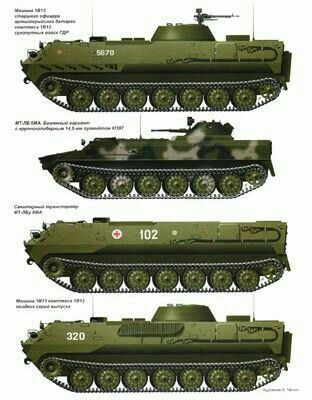 -ACRV Ml974(2) or 1V14 and 1V15: These are the Battery and Battalion Command Vehicles used by both battery and battalion commanders. The artillery commander decides how to attack targets of opportunity, as relayed by the supported maneuver unit. He is assisted by a manual target acquisition, and fire direction computation system, with also communications personnel. Radio links are established to battery firing positions at battalion level.

ACRV M1974 (3) or 1V16: The Battalion Fire Direction Center vehicle is manned by the battalion chief of staff, assisted by personal manning fire direction computation and communications. It had onboard an electronic field artillery computer to providee data to each battalion Battery, to be passed on self-propelled howitzers. 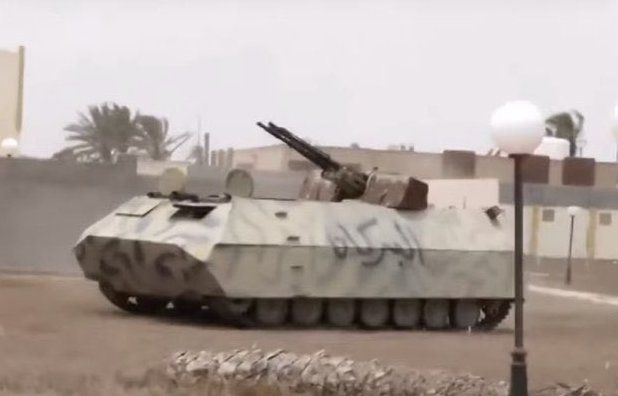 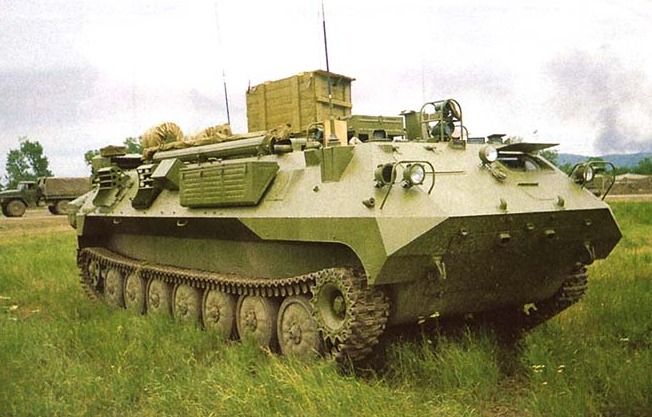 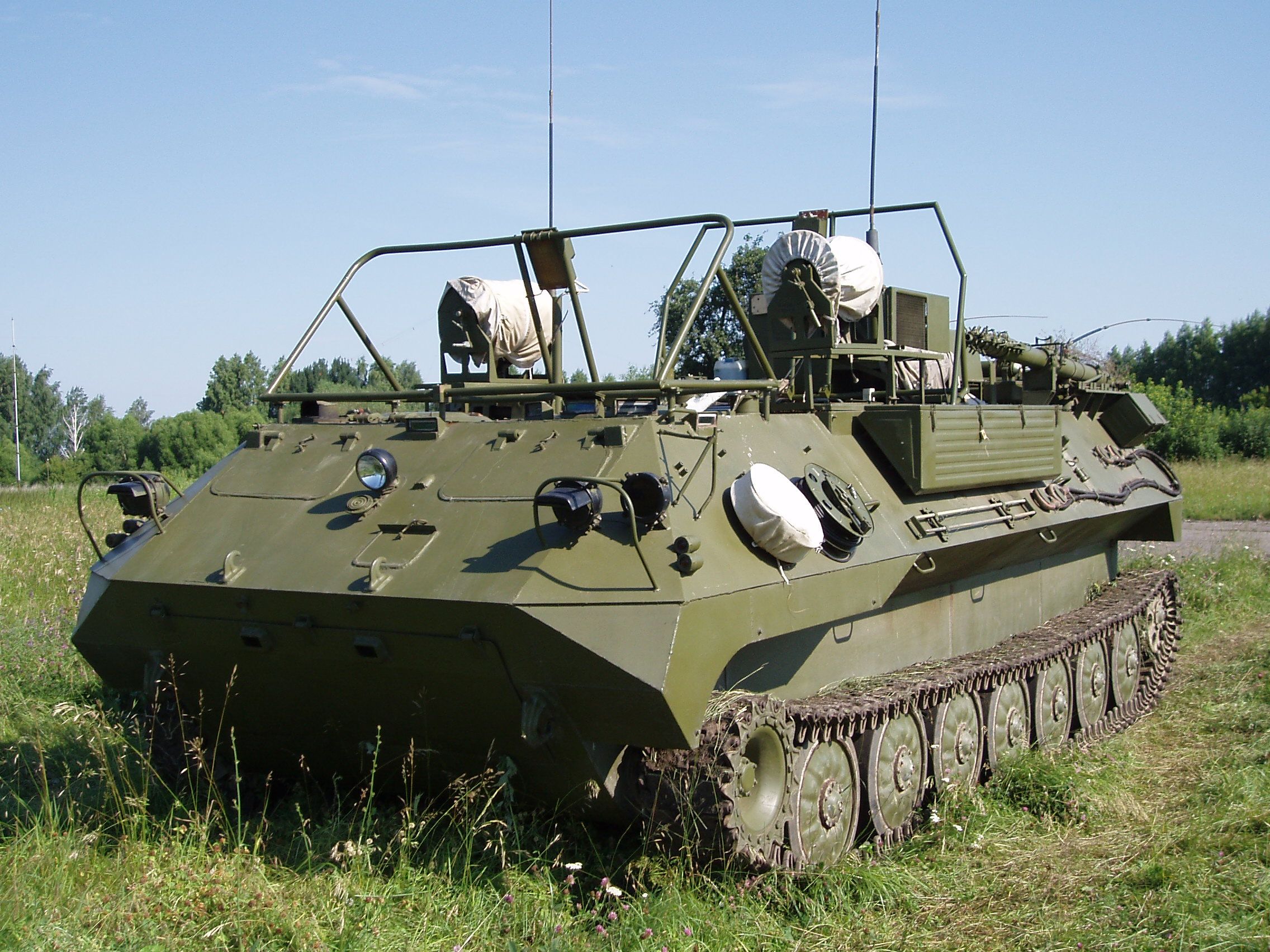 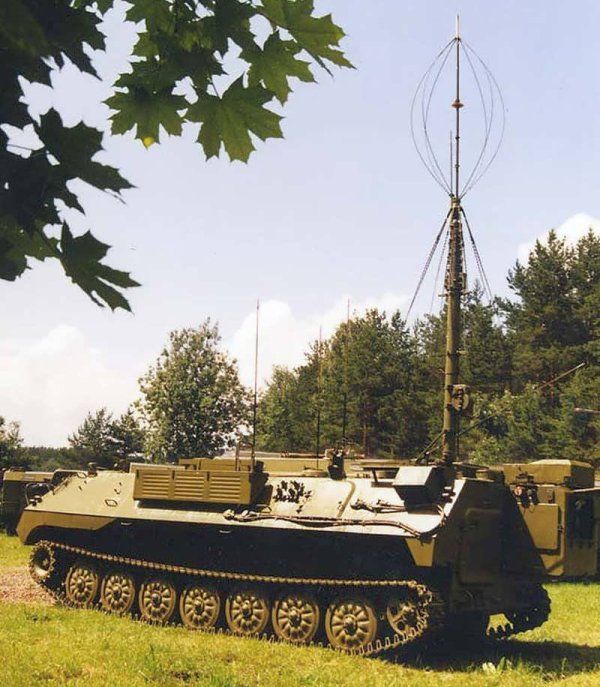 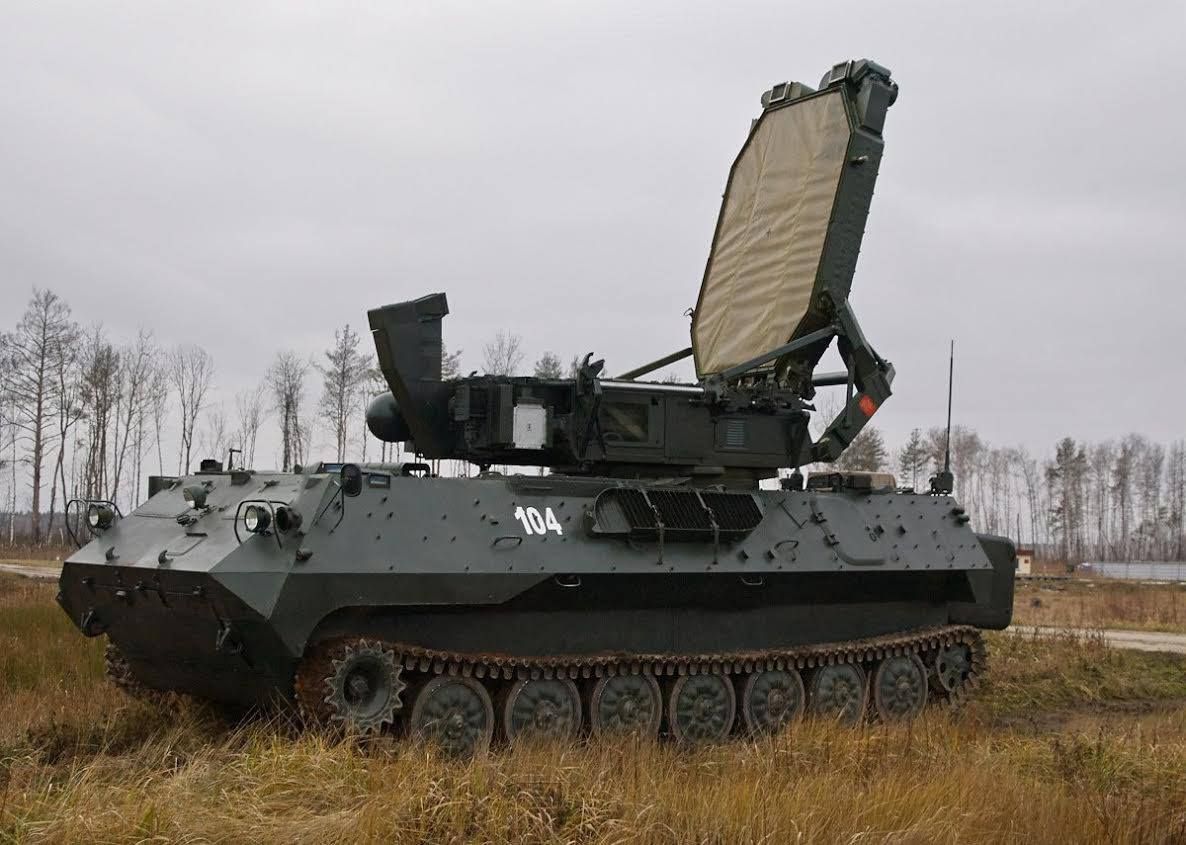 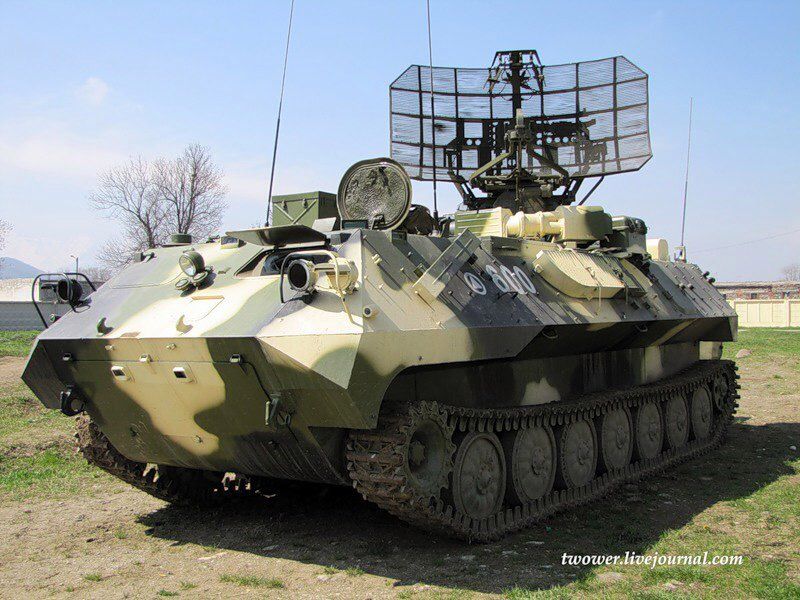 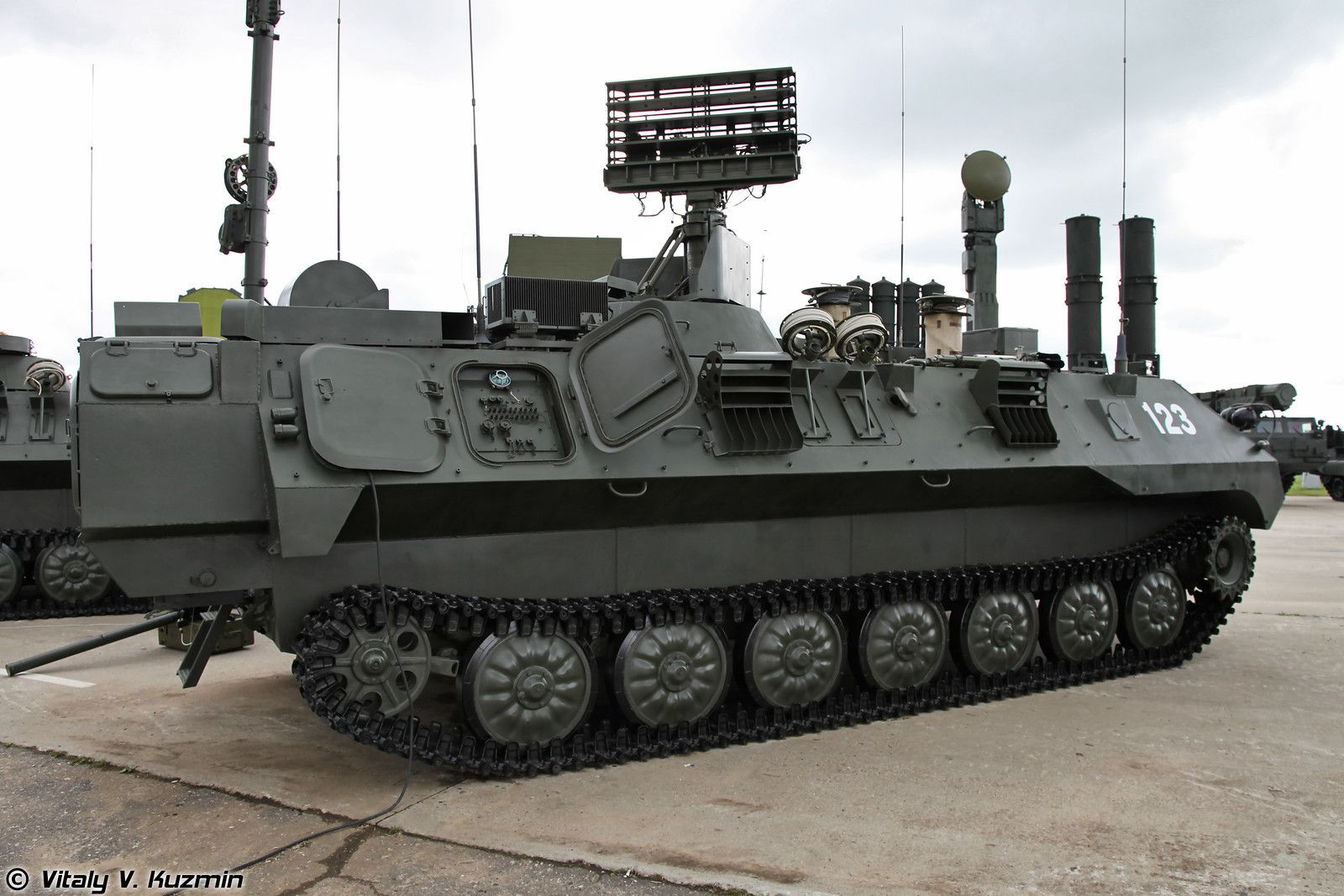 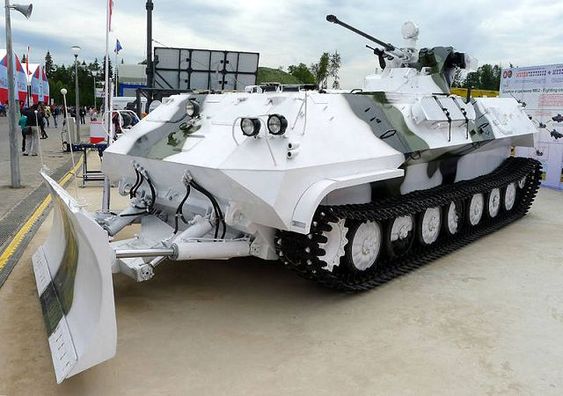 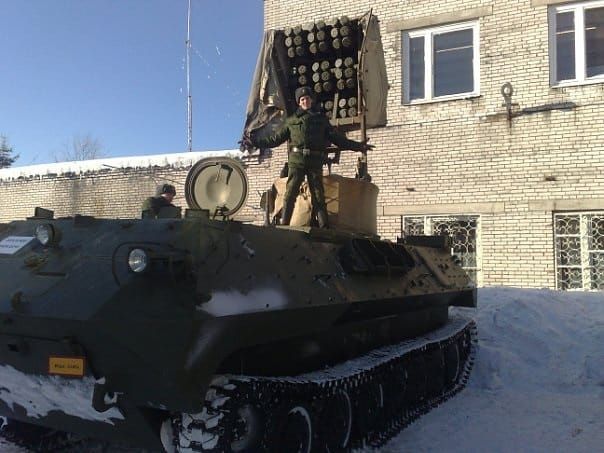 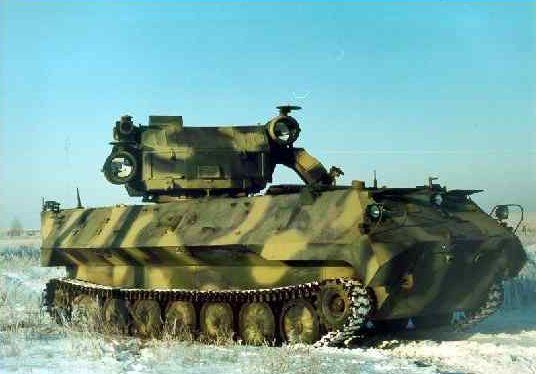 The Basic version, and many so-called "MT-LB variants" are in fact MT-LBu based. 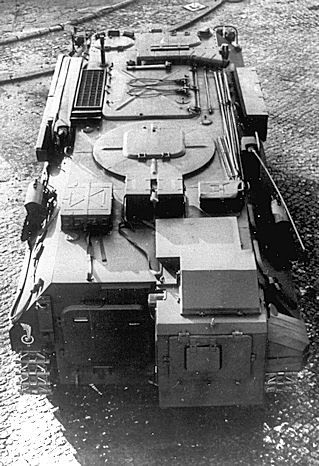 1V12 "Mashina" KSAUO Fire control set (kompleks sredstv avtomatizirovannogo upravleniya ognyom/Комплекс средств автоматизированного управления огнем) entering service in 1974 and consisted of 8 vehicles in 4 different models. Several upgrades have been developed, including the 1V12-3 "Mashina-M", the 1V12M "Faltset", the 1V12M-1 and the 1V12M-2. This set is found in artillery units equipped with self-propelled howitzers like the 2S1, 2S3, 2S5 and 2S19. 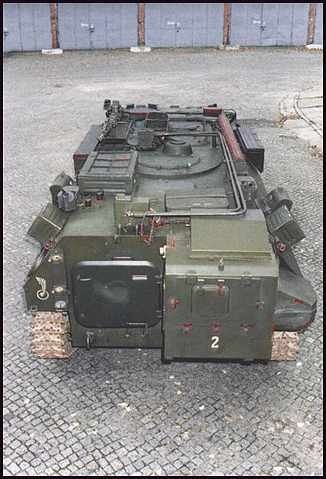 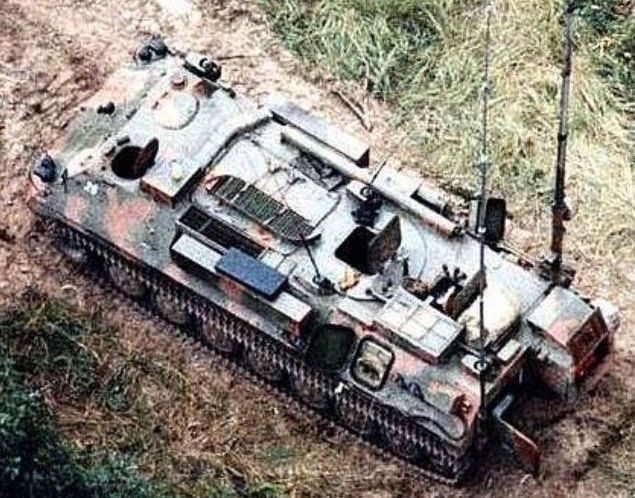 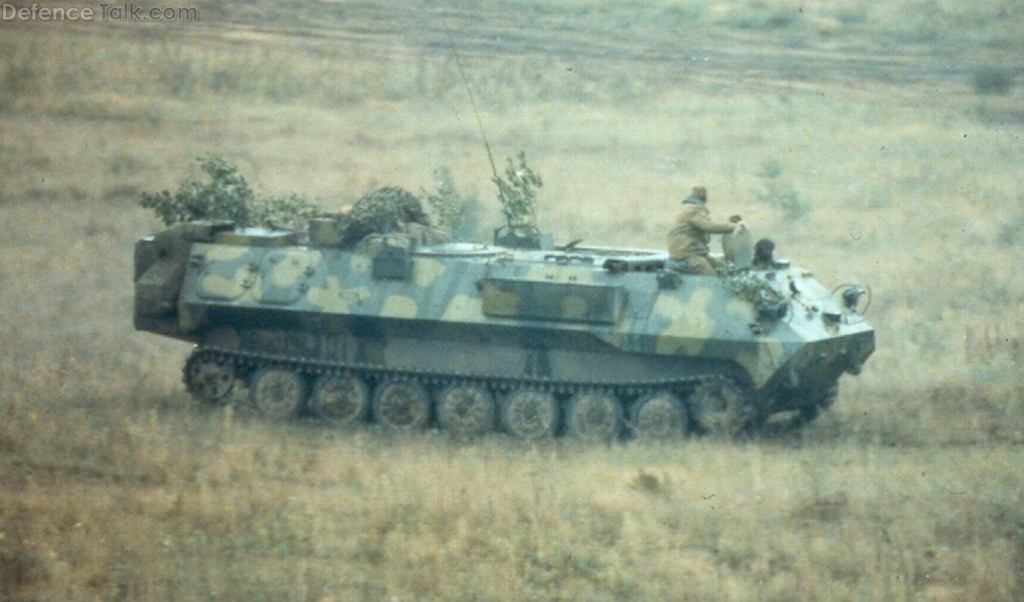 9V514 "Beta-3" Divisional computer vehicle, belongs to the PASUV set. The specialised equipment consists of an Argon-40 computer and the T-244 data processing unit. Produced from 1980 to 1990.

MP21-25: Vehicles that belong to the automated field command set PASUV "Manyevr" that was developed in 1972. Vehicles of the PASUV-R set (from 1984) are equipped with the data processing unit "Redut-2P" and have the suffix R in their designator. All models are equipped with an 8 kW generator, an antenna mast AMU and several movable wip antennas.

MP24 (9S775): For the commander of the field artillery and rocket forces (MP24M), the chief-of-staff of the artillery regiments (MP24M-1) and the divisional artillery group (MP24M-2). Fitted with a DAK-2 range finder and the 1V57M artillery computer.

The 122 mm self-propelled howitzer is of course better known as the "Gvodzika" (1975), the main modern self propelled gun until the fall of USSR. A whole article is dedicated to it.

120 mm self-propelled gun-mortar developed from the basis of the former 2S1 in Russia and first revealed in 2014. It was equipped with the new 120mm 2A80-1 mortar gun. Manufactured in small quantities by the Motovilikha Plants Corporation of Perm, the latter also produced the 2S9 and the 2S31. The only 30 delivered are in service with the 21st Mechanized Brigade in Totskoye. 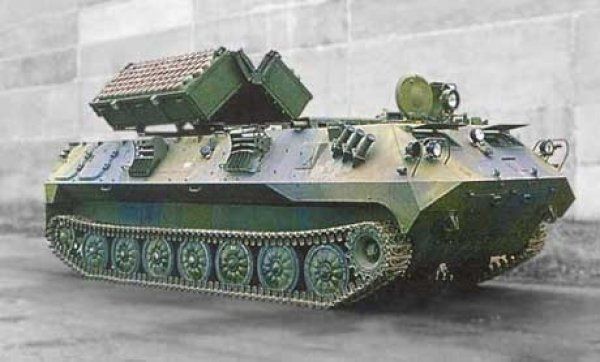 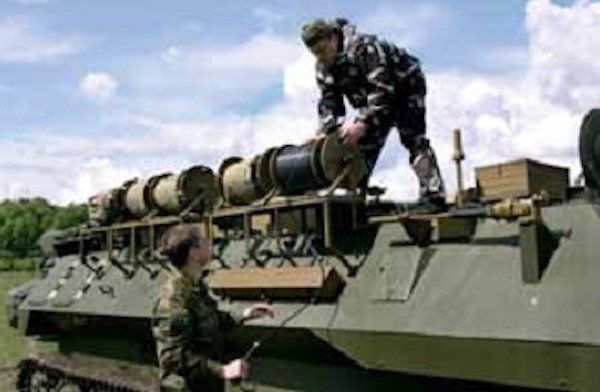 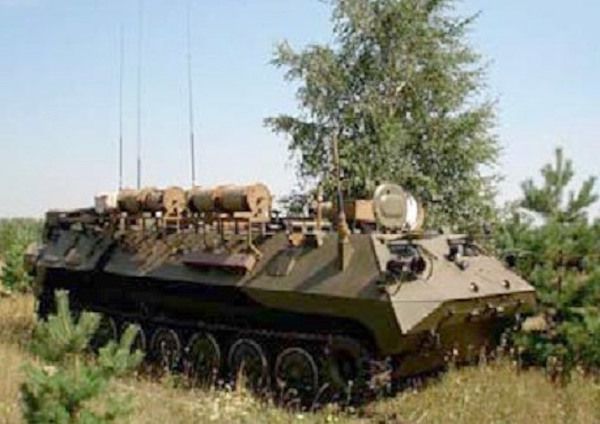 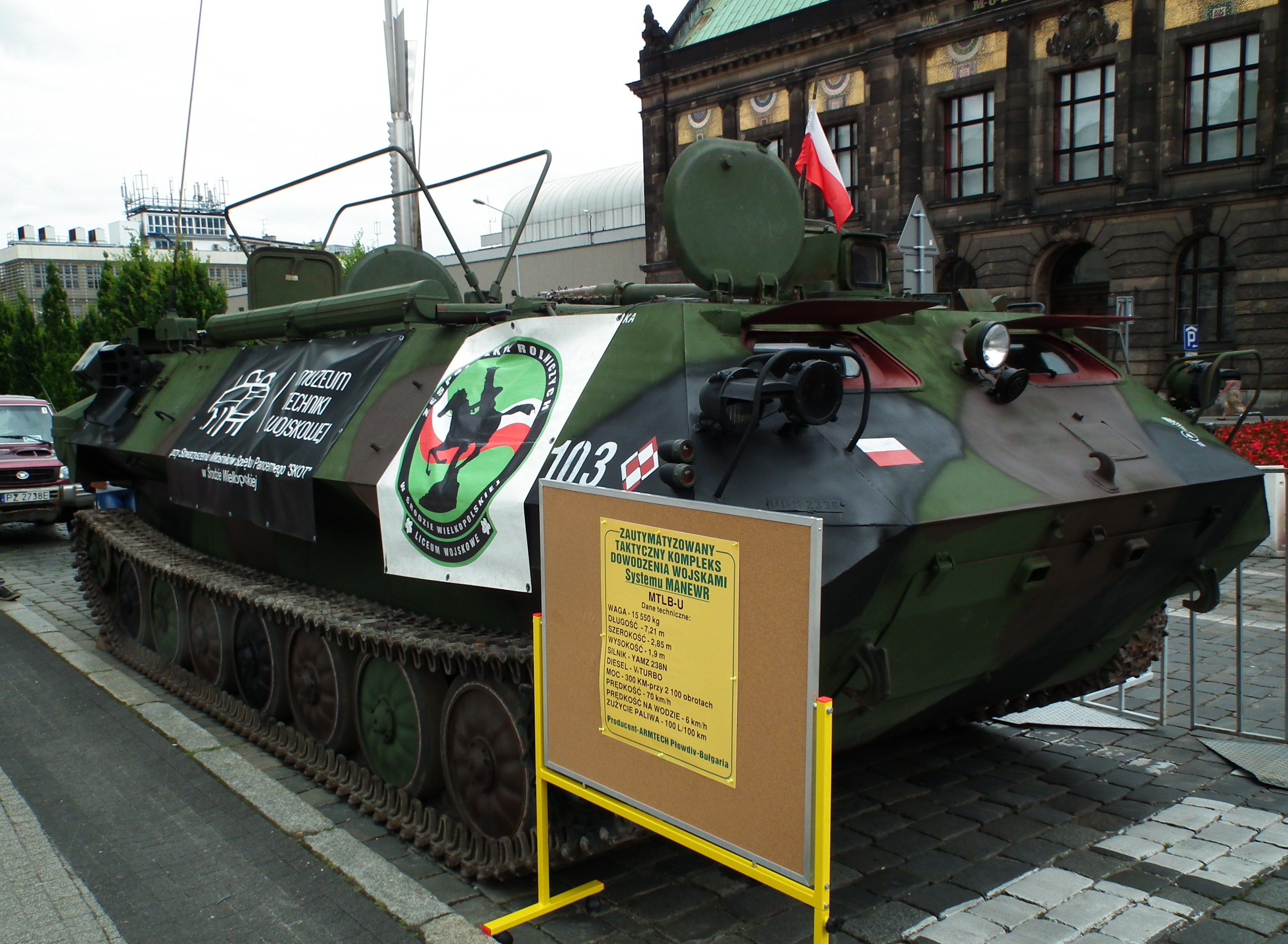 KShM 9S743: Command and staff vehicle, initially very similar to the Soviet MP24 but has been upgraded in the year 2000 with new communications gear. In service. Iskra MTP-1 – combat engineer vehicle, equipped with a big dozer blade at the rear, a roof-mounted crane with a capacity of 3,000 kg and a machine-gun turret TKB-01 in the front right corner (as per MT-LB). Combat weight is 14 t. Prototype. KShTMS – command and control vehicle, fitted with automated equipment. KShM-R-55 – command vehicle, fitted with the communications set R-55B. This consists of the HF radio R-55R, the receiver R-55P, the VHF radio R-33 and the receiver R-23. MSP-1/2 Unknown variant.

MT-LBu-TP (tulipatterin komentopaikkapanssarivaunu) – battery command post. This is a modified 1V13, fitted with an NSVT-12.7 machine gun, 76 mm Wegmann smoke grenade launchers, stowage boxes and a generator. Crew: 8. The first three prototypes were developed by Vammas in 1993, the rest of the fleet was modified between 1995 and 1997. MT-LBu-P (paikantamispanssarivaunu) – modified 1V14/15, used as navigation vehicle for survey and preparation of firing positions. External modifications as per MT-LBu-TP but armed with PKM machine gun. MT-LBu-PS (patteriston komentopaikkapanssarivaunu) – modified 1V16, used as battalion command post. Externally very similar to MT-LBu-TP.

Based on older versions – mostly of the 1V12 series – Minotaur from Belarus has developed new versions of the MT-LBu:

Cmbat action depended on both the users and events since 1974. It seems they participated in the Afghanistan invasion and war in 1979-89, where it wa its baptism of fire. It was deployed in the Iraqi army and thus many were destroyed/captured by coalition forces after Desert Storm. They were used by the Serbian army after the dislocation of yugoslavia and the war in Bonsia in 1995. They took part in the Cechenya war, and in Georgia, and more recently took part in the Donbass war since 2014. There are many photos showing extra vehicles destroyed (on both sides) in the current 2022 war of Ukraine.

MT-LBU destroyed after the battle of Konotop, February 2022

The MT-LB on mil. vizualized