The T-10 was known internally as Object 730 and in some cases IS-8 or IS-9. It was bearing the initial of the ruthless country's leader since the 1930s, but as the latter passed out in 1954, it was renamed T-10, more in line with current denominations. The T-10 was in fact the last Soviet heavy tank of the Cold War, and final development of the IS series started with the IS-1 in 1942. It was eventually accepted into production in 1952, renamed IS-10 (for "Iosif Stalin") and then T-10. The T-10 however was produced in limited numbers. After the death of Stalin, many of his military obsessions went cut down, such as heavy tanks, although in the case the general staff thought it was worth resuming the production, which went on until 1966. The main reason was the development of NATO heavy tanks such as the Conqueror and M103. However, alongside the T-10, all previous developments were terminated, from the IS-4 to the IS-9. The T-10s were attached to elite batallions intended to deal with NATO armour, and other heavy tanks until the 1990s.

Its closest lineage was the IS-3, and compared to it, the T-10 had a longer hull and an extra pair of road wheels (7 vs. 6) and a larger turret, fitted with a new gun equipped with a fume extractor while it also had an improved diesel engine providing excellent mobility and thicker armour, and it could carry more ammunition. In all plans, the only production heavy tank of the cold war in significant numbers, outside the IS-3, was an all-out improvement over the IS-3. It replaced the IS-3 gradually in most units, and those placed in reserve were quickly resold, notably to Egypt. The T-10 however, was never exported outside of the Soviet Union, but kept in small special units attached to the "western front", facing NATO. The idea of deploying such tanks in independent tank regiments attached to armies and independent tank battalions attached to divisions. These units could link with to mechanized units and support infantry operations and perform breakthroughs. The heavy tank type was maintained despite armoured warfare in World War II demonstrated drawbacks of heavy tanks. Mobity seemed paramount and lmed to the development of medium tanks with heavy guns, redering heavy tanks in general obsolete. As Soviet commanders rushing towards Berlin recalled, mechanized divisions's heavy tanks units lagged behind T-34s. However the type was maintained for a few years as part of the Cold War arms race, despite T-54 and T-62s had a level of protection and armament making them almost equal to the T-10. Production stopped well after the Soviets themselves recoignised the main battle tank (MBT) concept was the only way forward.

Design process of the T-10 started indeed in 1944, when there were plans already to replace the IS-3 on the long run. It went though many iterations: 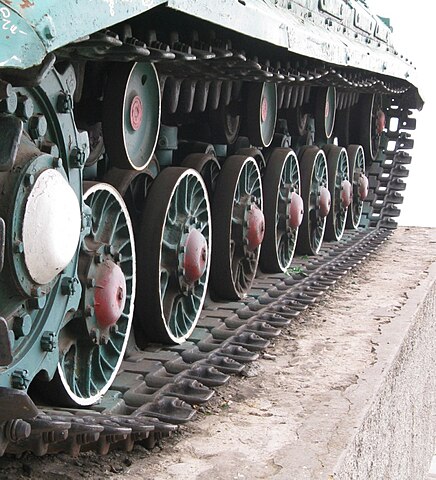 Production of the T-10 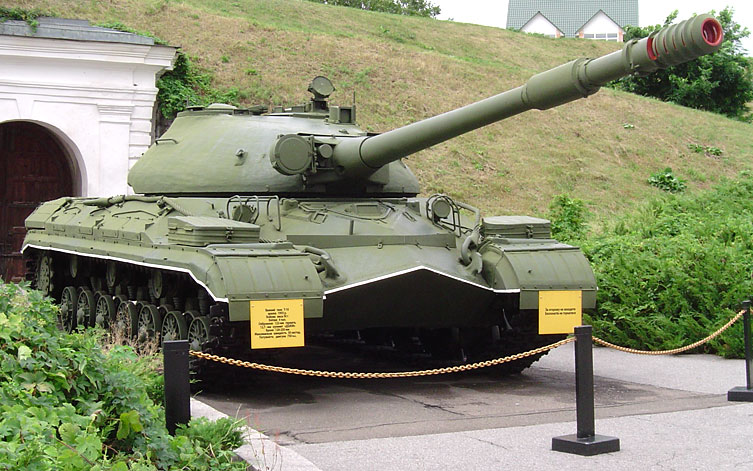 T-10M Heavy Tank at the Museum of the Great Patriotic War, Kiev, Ukraine. 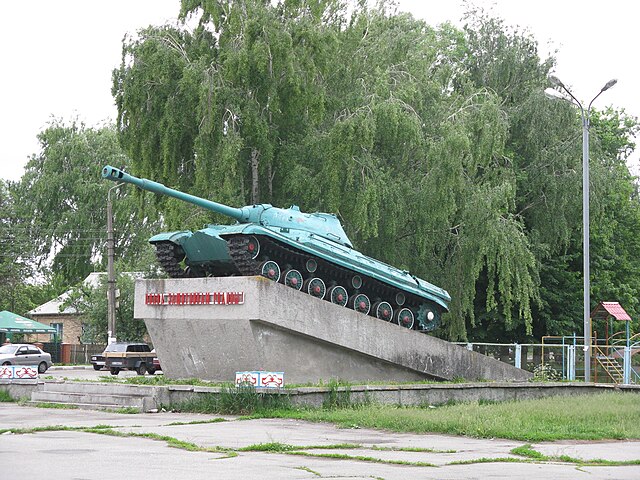 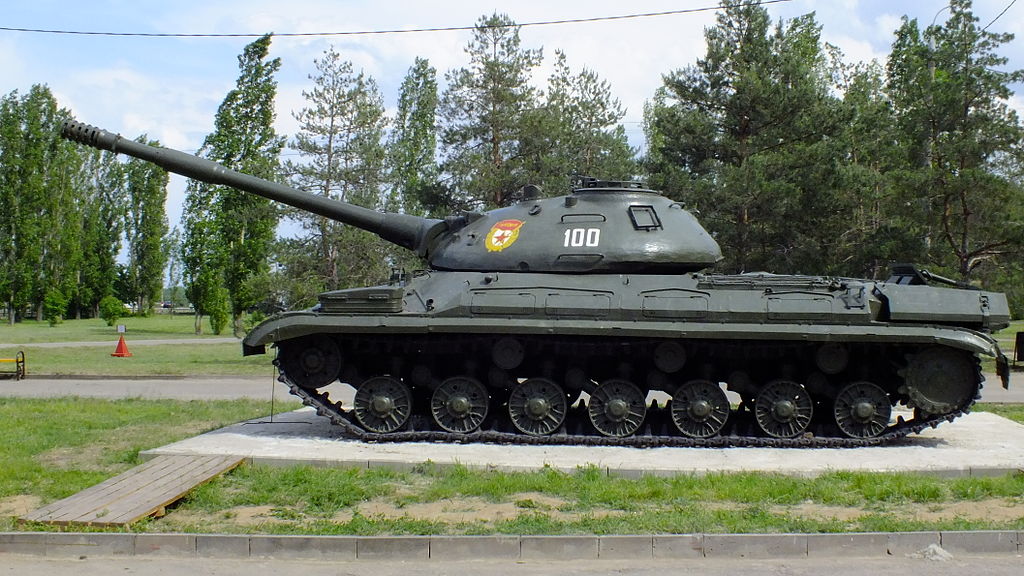 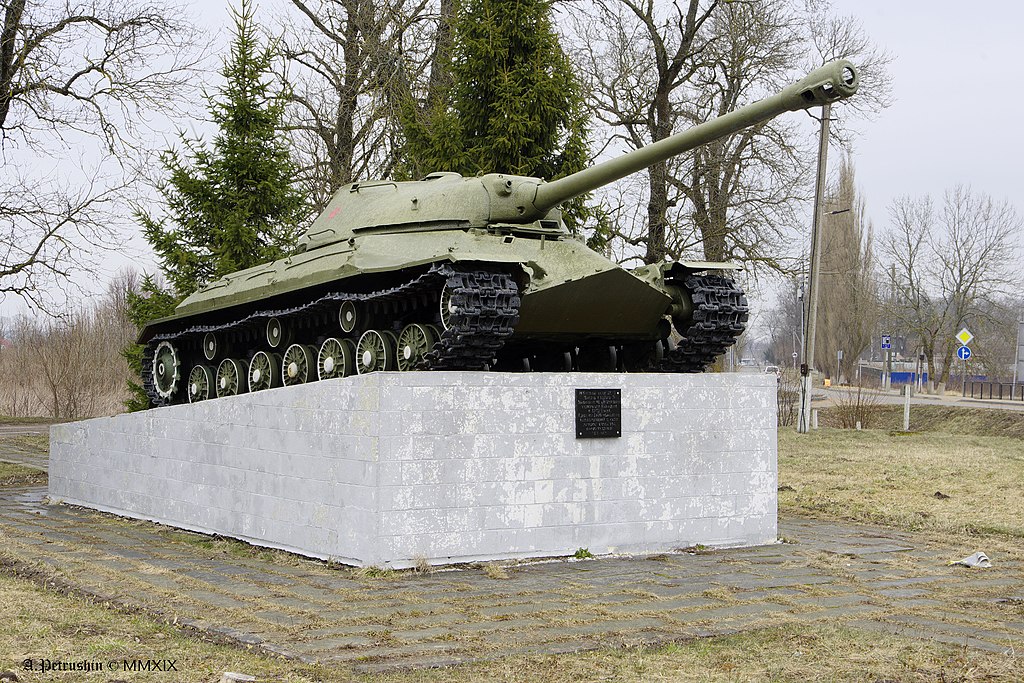 T-10 Heavy Tank on a pedestal at the exit from the city of Krasnoznamensk, Kaliningrad region.

The modernized version was applied to the 1958-1966 production, with two iteratons, allowing the tank to be kept semi-operational or reserve until the 1980s. The T-10M had a longer M-62-T2 L/46 gun, with a five-baffle muzzle brake. The mount was given a two-plane stabilizer, and the roof DSHK machine guns replaced by a 14.5 mm KPVT. Also infrared night vision equipment as installed and a NBC protection liner inside for collective protection, integrating an automatic overpressure system. Because of the longer gun, the overall length went to 10.29 m, versus 9.87 m. The T-10M also had a turret 230mm@24° face with to 137mm@57° sides.

In the late 1960s, independent tank battalions were re-equipped with the T-64s as a new elite tank and later, the turbine T-80. Regular tank and mechanized units had upgraded T-55s and T-72s in its place. The T-10 was also killed by the development in the 1960s of new, compact antitank guided missiles (ATGMs), making for the long range brought by the T-10' 25TA gun. BMP-1 infantry fighting vehicles were given some, and a version compatible wit the main gun of the T-64 notably, made the T-10 main gun obsolete; In addtion, rather than lumbering machine counting on brute armour thickness, more sophisticated reactive armour became widespread, without speed loss. In this context, the T-10M was a WW2 dinosaur.

At the same time, the T-10, the last and best heavy tank in the USSR, not inferior in firepower (for the M version) to western equivalents such as the M103 and Conqueror. But it surpassed them in mobility and maneuverability, with better all-round protection and smaller profile and silhouette. Its auxiliary weapons were also arguably more powerful, but overall it was produced in larger volumes than its heavier counterparts and proved to have large modernization potential. It was envisioned in the 1980s to equip them with a new fire control system and ERA to remain relevant in the next decade.

It is difficult to assess the precise numbers of T-10 and T-10M in service at the end of the cold war. Estimates ranged wildly, but is is believ around 1,000 were still active when USSR dislocated to form later the Russian Federation. Non Warsaw pact country was ever proposed the tank, and after T-10s were retired in the 1980s, the design was not very appealing to foreign countries and no attempt to make exports was made. It is said that a number were in possession of South Ossetians during the conflict, but other than that, life was quiet for the T-10, maintained for the "big push" westwards, making exercises in beween. No less than 38 had survived, most in static display in Russia, Ukraine and Bielorussia.

Another illustration of the T-10M, note the "large" turret basket.