Sweden is one of three nations featured in War Thunder that thus far lacks a naval tree. In this article, we'll be taking a look at what that tech tree might look like and how it would stand out in the crowd.

With the arrival of the Italian Navy - the Regia Marina - in War Thunder update 1.89 ”Starfighters” yet another Naval tech tree was added to the game. This leaves the game with three nations that lack a naval tech tree, France, China, and Sweden. France’s naval history and power is relatively well recognised in the modern day, with ships like the famous Dunkerque-class battleships and Charles de Gaulle-class aircraft carrier. But the role of the remaining two nations in naval strategic terms during the last 100 years is less well known. As such, this post will aim to discuss the potential of the Swedish Navy in War Thunder.

The Swedish Navy played an important role in supporting the rise and consolidation of Swedish power in the Baltic sea during the 16th and 18th centuries. With multiple internationally recognised events and ships such as the Vasa, Kronan and Mars ”Dane Hater”, this period during the age of sail dominated by ship-of-the-line tactics is likely what the Swedish Navy is most well known for. So what then could this tech tree look like in War Thunder, and what notable vessels are potential candidates for the tree? 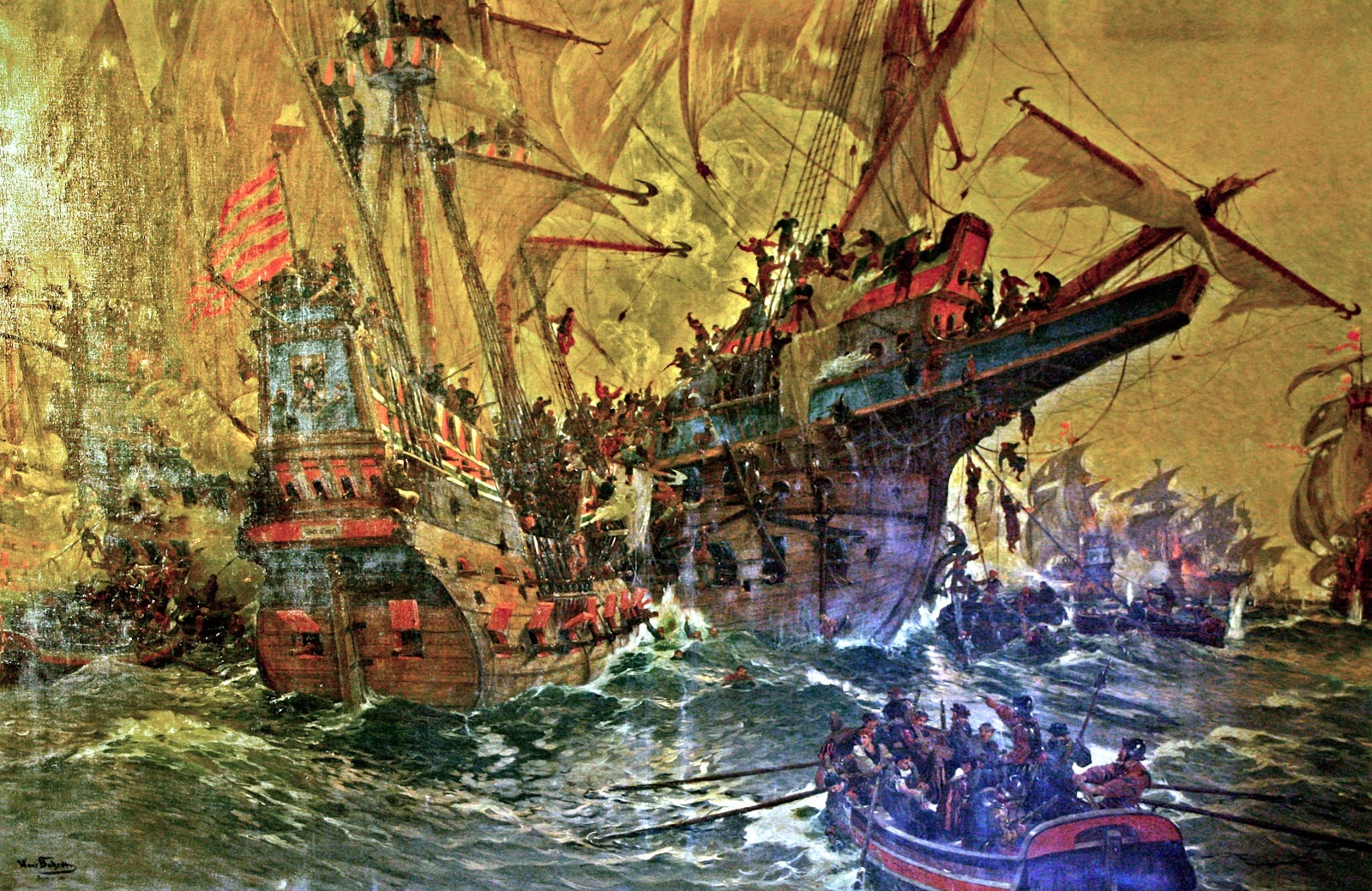 A dramatisation of the fate of Mars at the hands of a combined Danish-Lübeckian fleet in 1564. Her proportions are exaggerated in this portrayal, but research and records indicate that she may well have been the world’s largest ship at the time of her sinking.

For this purpose, I have put together a suggestion for a Swedish tech tree in War Thunder earlier this year, one which is being continuously updated as new features are being added to the game. The potential vessels presented in this tree stretch from the late 1800s to the 2010s and include some vehicle types that would be oddities to War Thunder, including missile armed vessels and coastal defence ships. This suggestion can be seen on the War Thunder forums and is called ”Independent Swedish Naval tree” (https://forum.warthunder.com/index.php?/topic/477423-independent-swedish-naval-tree/). Below I will go through this tree tier by tier in order to give insight into what might be, detailing both general trends and particular oddballs.

Rank 1 begins, unsurprisingly, with motor torpedo boats. These have significant Italian influence, some being purchased vessels, and others being Swedish developments with Italian engines. The armament of these vary from heavy machine guns to 40 mm autocannons, but none of them are armed with more than two torpedoes. One of these would be a premium boat which the Swedish prince Wilhelm served aboard during the First World War. This rank also features two lightly armed support vessels intended for general support duties, as well as a premium minesweeper of the Arholma-class equipped with two 75 mm guns, a ship type which is also featured at rank 2. 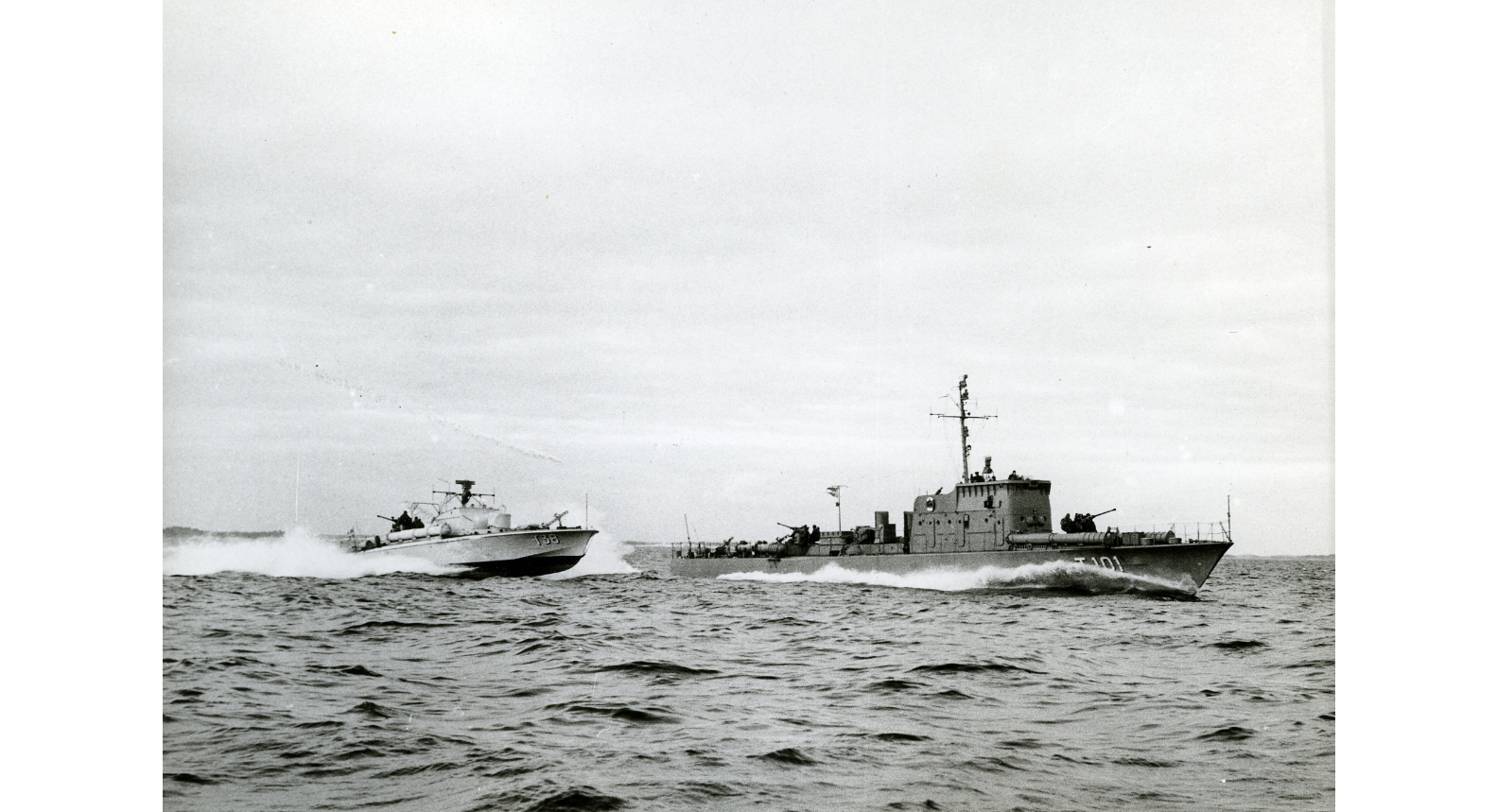 T101 Perseus and T38 during a torpedo boat exercise during the Cold War.

Rank 2 features perhaps the widest variety of vessels in terms of both type and age. The motor torpedo boats grows into the proper torpedo boats of the cold war, with more powerful artillery armament and four to six torpedo tubes. This line could lead through both German and British influences and ever increasing firepower, culminating in a corvette of the early 1980s equipped with a 57 and a 40 mm autocannon, as well as alternatively torpedoes or RBS 15 missile launchers. This line could also be branched to boats equipped with SS.11 anti-tank guided missiles adapted for naval use in the form of the Rb 52 armed T108 Altair, or HELLFIRE missiles adapted for the same purpose in the form of the RBS 17 armed Stridsbåt 90H. Further at this rank would be early destroyers of pre-WWI and WWI vintage equipped with three to four 75 mm guns and modernised anti-aircraft armament from the start of World War Two. A further line of candidates for rank 2 would be mine sweepers and frigates. These would include the previously mentioned Arholma-class in the form of Bremön and Holmön. The frigates in question are postwar modifications of destroyers that were active before and during World War Two. Compared to their original forms, these have reduced artillery armament, but additional anti-submarine and mine armament. Already at rank 2, cruisers could also be viable in the Swedish tech tree. This would be in the form of both the auxillary cruiser Hjkr 5 Warun and the torpedo cruiser HMS Örnen. The former being a repurposed cargo ship with artillery and torpedo armament, while the latter is a vessel dating back to the late 1800s with two 120 mm guns, torpedo armament, and anti-aircraft weaponry added at the start of WWII. Two potential vessels that are suitable premium candidates are the mortar armed Stridsbåt 90H and Lätt Trossbåt. These are both vehicles armed with 120 mm mortars capable of direct fire and are modern albeit experimental designs. 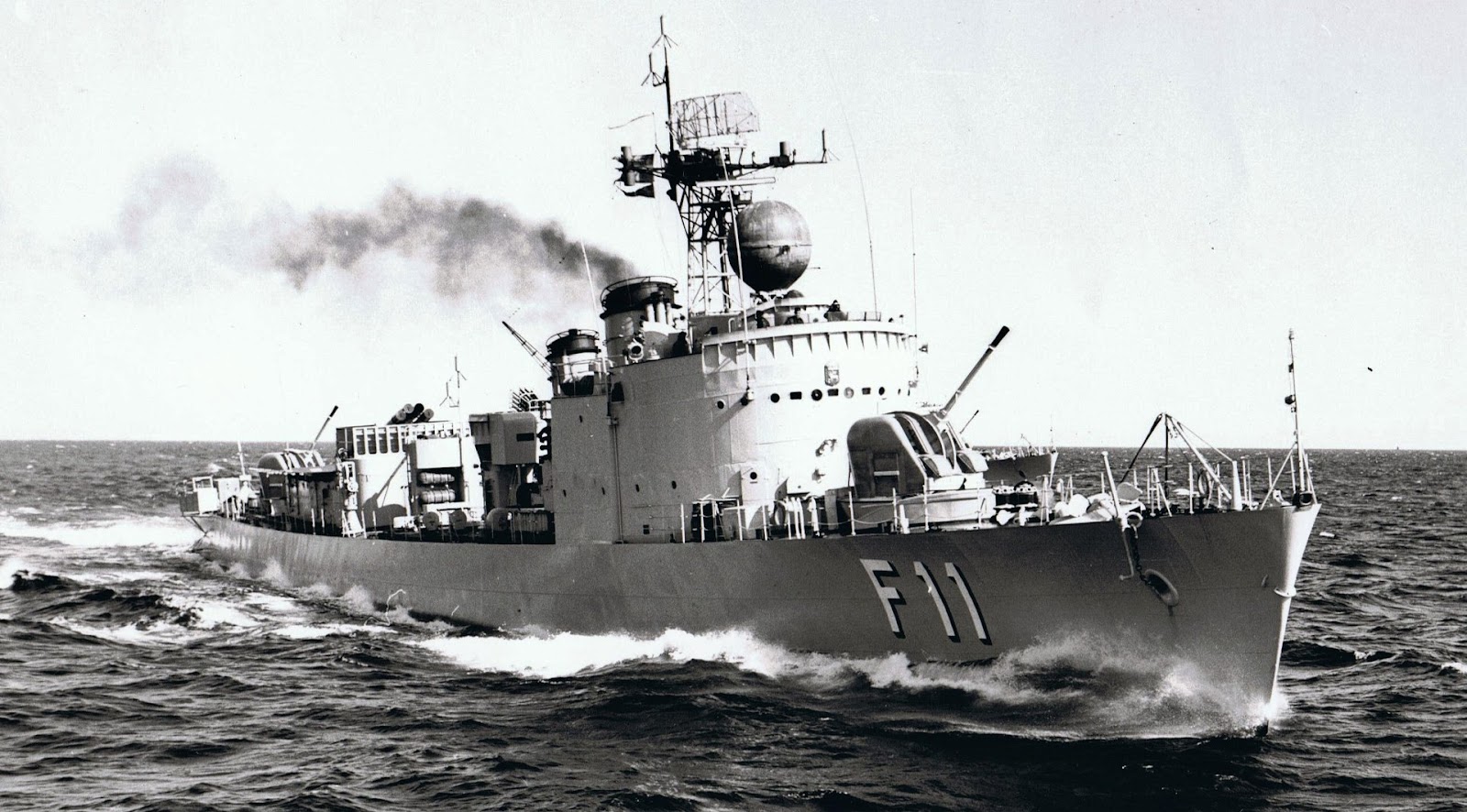 HMS Sundsvall, a post-war frigate which originally served as a Visby-class destroyer during the Second World War.

Rank 3 is as for other naval trees dominated by destroyers, albeit with exceptions. In total, there are ten different classes of destroyers that would be suitable as rank 3 vessels in the Swedish tech tree. At the lower end, there is the Mode-class which is a coastal destroyer by Swedish standards, only being armed with 105 mm guns despite being a WWII design. Besides this class, all other Swedish destroyers are armed with varying types of 120 mm guns and torpedo armament. At the latter part of the tech tree, the Halland-class provides a fighting chance against other high battle rating destroyers with its four automatic 120 mm guns in two twin turrets capable of a combined rate of fire of 80 rounds per minute, alongside its excellent secondary armament. In the future, this class could also be equipped with anti-ship missiles, as this is the first western vessel to ever be equipped with anti-ship missiles. Another notable high battle rating destroyer is the Östergötland-class, which besides its standard armament of four older 120 mm guns could be equipped with a Seacat short range anti-aircraft missile launcher. This would be a new type of weapon for naval forces, but a type certainly within the boundaries of War Thunder’s technological standard. Exceptions to the rule of destroyers at this rank would be HMS Clas Fleming and HMS Älvsnabben, the former being a 120 mm armed mine cruiser while the latter is a 152 mm armed mine layer. These are large and unwieldy vessels, but would be able to absorb a decent amount of damage while carrying potent armament. Potential premium candidates at rank 3 include Italian destroyers of the Puke and Romulus-class, originally known in Italy as the Sella and Spica-class respectively. These destroyers were purchased by Sweden early during WWII as a way of bolstering the strength of the Swedish Navy and were subsequently modified for Swedish service. 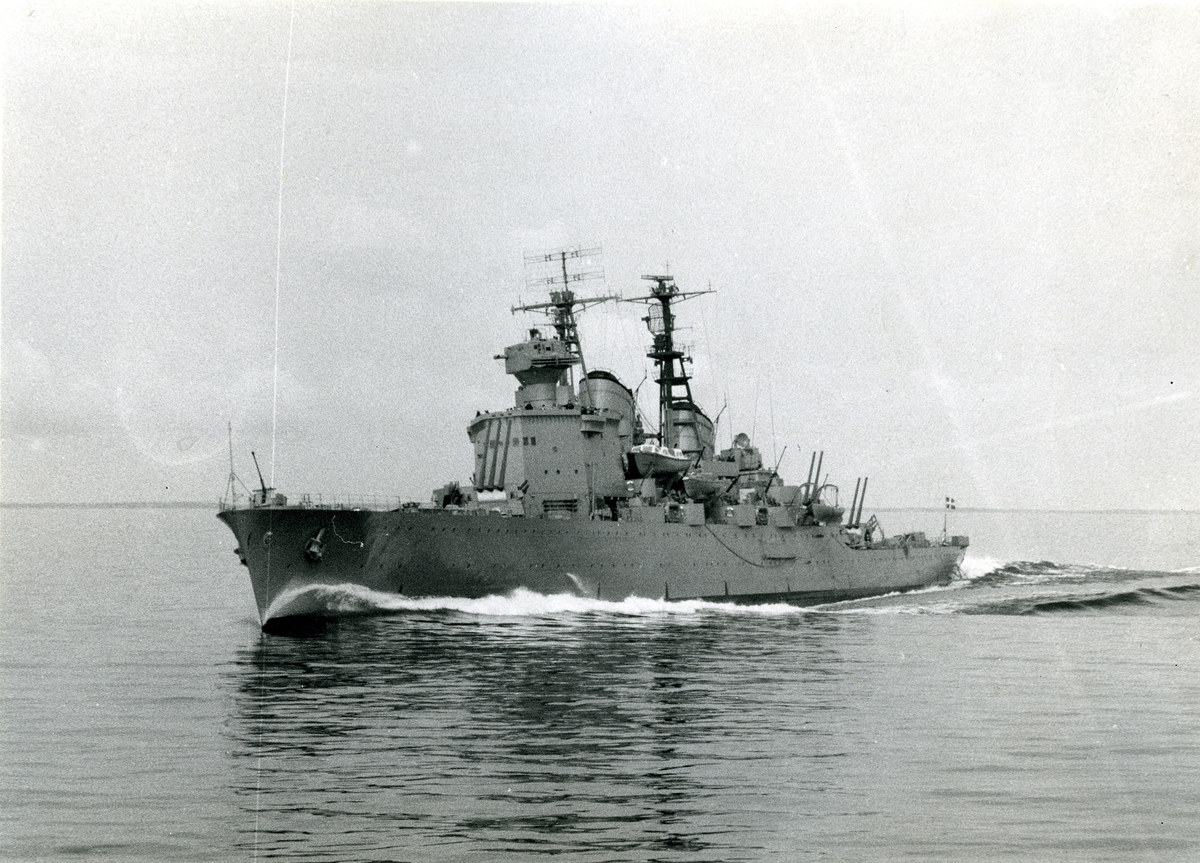 HMS Göta Lejon after her rebuild during an anti-aircraft exercise.

The following rank also follows the general trend of War Thunder’s naval trees, being dominated by cruisers. The cruisers available at this rank would however be quite different, ranging from HMS Fylgia which is known as the world’s smallest armoured cruiser ever built, to the seaplane cruiser HMS Gotland with her unique construction, followed by the more conventional Tre Kronor-class and its excellent anti-aircraft armament. At this rank, a type of vessel which both Sweden and other nordic countries are fairly well known, namely the coastal defence ship. The types relevant at this rank are armed with two primary 210 mm guns supported by multiple secondary 152 mm guns. While these would be older designs from the early 1900s, these types were upgraded with modern anti-aircraft armament during the Second World War, thus making them relevant for War Thunder. 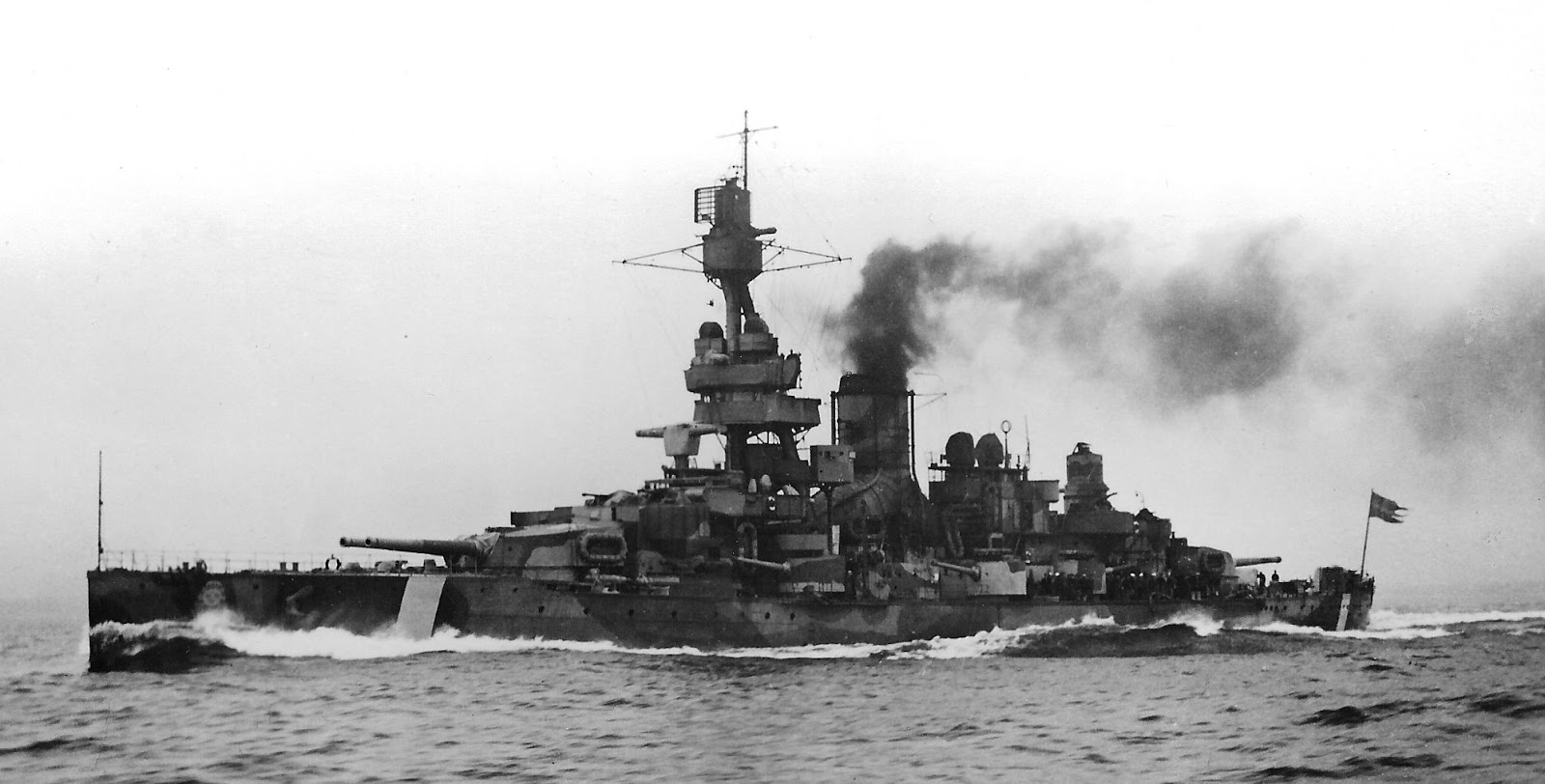 HMS Gustaf V of the Sverige-class towards the end of the Second World War.

Finally, Swedish rank 5 would be dominated by a single class of coastal defence ship, the powerful Sverige-class. With its quad 283 mm guns, thick 200 mm belt and good maneuverability, this class would be able to contend with the most potent heavy cruisers in War Thunder. Additionally, as this class went through various rebuilds during its time in service, multiple different variants with varying secondary armament, fire control systems, and looks could be added. 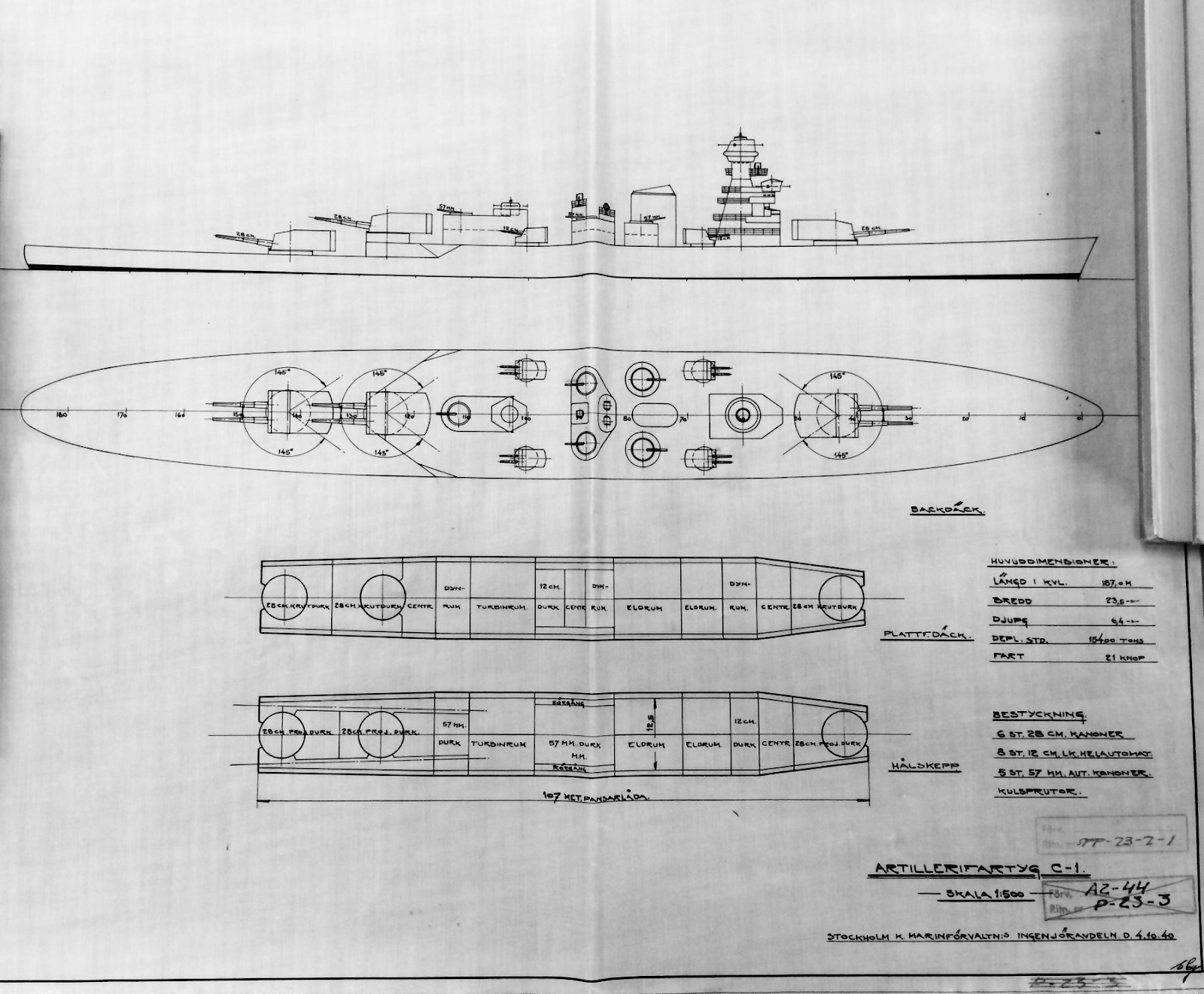 Artillerifartyg C-1, a design from 1940 outlining the general characteristics of a potential new coastal defence ship. 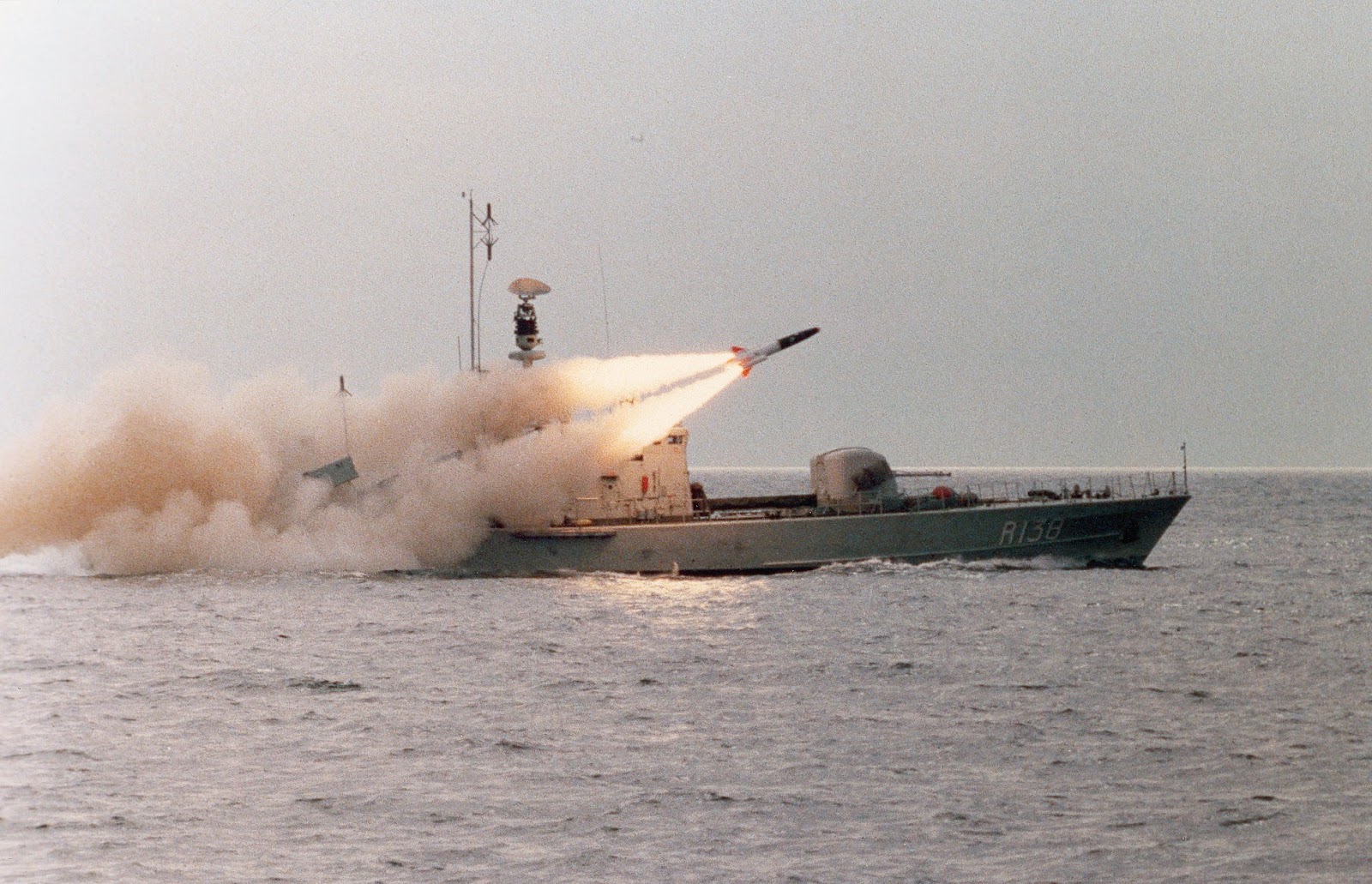 That generally covers what a naval tree consisting of purely Swedish naval vessels within the framework of War Thunder’s current meta would look like, but what about the future? What about potential for adding heavier naval units, long range missiles, submarines, and other nordic nations to the tech tree? As for heavier units, the Sverige-class is the most heavily armed and armoured type of ship ever built for the Swedish Navy. However, there are candidates from the 1930s and 40s which were never built in the form of improved coastal defence ships, heavy cruisers, and even a modern monitor. Gaijin has previously stated that such paper designs may be allowed for naval forces due to the difficulty of producing prototype ships, provided that sufficient data can be made available. This can partially be seen in the coming update 1.101 ”Raining fire” with the Commandanti Medaglie d’oro, a ship which was laid down but never launched. In regards to further features like long range anti-ship missiles and submarines, there are also various candidates with good variety and easily able to stand up to other classes. Sweden was the first western nation to equip naval vessels with anti-ship missiles and was also one of the first to operate and produce submarines. Finally, as for other nordic countries, we’ve already seen that certain Finnish vehicles have been included in the Swedish tech tree. As such, some units with Swedish influence like the Väinämöinen-class coastal defence ship or Turunmaa-class gunboat may be relevant additions, particularly as premium vessels. Overall though the vessels of other nordic aren’t of types which a potential Swedish naval tech tree would lack and therefore, these nations would not fill a central role in enabling a Swedish tech tree. 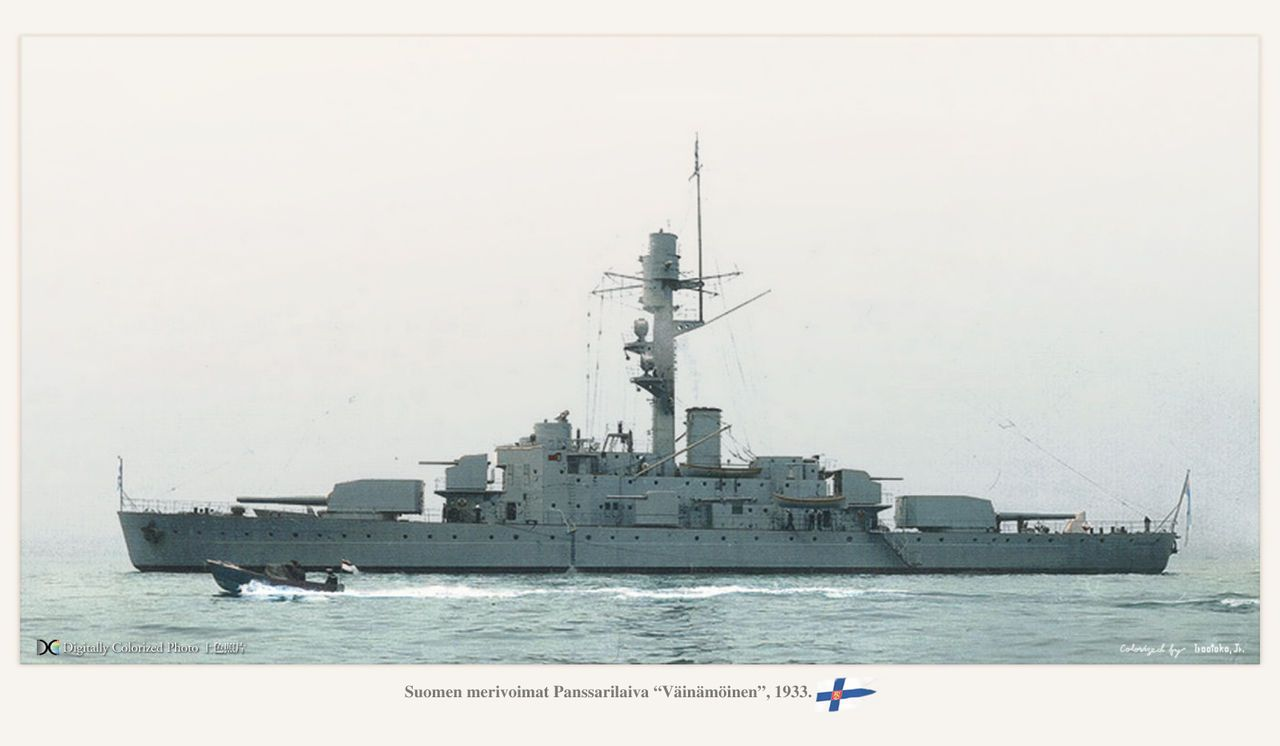