The PLL-09 is a current Chinese 122 mm self-propelled howitzer also used by China's marines. The vehicle is derived from the ZBL-09 "snow leopard" APC/IFV family, to provide indirect fire support for rapid deployment brigades. These units were developed in concept just after US Stryker brigades. They are equipped only with with lightly armored and all-wheeled, highly mobile 8x8 vehicles, and the PLL-09 is the organic artillery part of it. After the APC, reconnaissance vehicles, 105 mm fire support, command, engineering and other specialized vehicles are used. The PLL-09 SPH is registered for about 550 vehicles, with an alternative Type 96 155 mm howitzer. This vehicle is fast, shares many components with the ZBL-09, ensuring easier support and maintenance on the field, while its unit can keep pace with the fastest MBT-equipped Chinese PLA Tank brigades, or for fast advanced reconnaissance columns deep into enemy territory.

The PLL-09 used the chassis and most mecanical components from the ZBL-09 Snow Leopard. The base vehicle was designed as a modular armored personnel carrier and it keeps its original 8x8 configuration now standard since the 1980s. The artillery system however is completely tailored for the task, and comprises a completely redesign central compartment with a new large turret ring and turret roomy enough to accomodate a specialized version of the 122 mm PL96 gun, or the Type 96 155 mm howitzer. The latter is a Chinese copy of the Soviet D-30 towed howitzer and the PL96 is currently in service with the Chinese army, and is a rugged and dependable model in 20 years old. This proven design ios also used by many other SPGs across the globe.

ZBD IFV, on which platform the PLL-09 is based on

The PLL-09 is basically the armored variant of the truck-based PCL-09, sharing the same ordnance. The other model close, is the PLZ-07 self-propelled howitzer also using the same 122 mm gun, but based on a tracked chassis. The Chinese marine corps also use the PLZ-07B, but now amphibious. These recent vehicles were planned to replace older models such as the PLZ-89/Type 89 122 self-propelled howitzer. The gun itself has the following characteristics:
Barrel length: 32 calibers
Projectile weight: 14-22 kg (HE, Frag, Incendiary)
Maximum firing range: 18-27 km
Maximum rate of fire: 6-8 rpm
Elevation range: - 3/+ 70°
Traverse range 360 degrees
Ammunition load: 40 rounds

The PLL-09 main gun uses a semi-automatic loader. It can fire both Chinese and Russian 122 mm shells, available in many types. It also uses a separate-loaded ammunition so that projectiles and charges are fully separated. However this causes a space allocation issue, and only forty can be carried inside the turret and hull bins. The Chinese had their own 122 mm shell types, domestically developed HE-FRAG, Utilitary type, Incendiary, Smoke round, and Flare round. This howitzer can reach a target 18 km away (with the standard HE-FRAG), and up to 27 km with the extended-range model. This also includes the possibility of firing laser-guided ammunitions based on the Russian "Kitolov" technology. The computerized fire control system interlinked with a digital ballistic computer taks charge of all possible trajectories and the vehicle can fire on the move if needed. The vehicles are also equipped with a full digital battlefield management system.

The PLL-09 used like the ZBD an all welded steel hull ant turret, made of steel plates in RHA. The front arc glacis was designed to 0.5 inches or 12.7 mm armor piercing (AP) rounds. The sideswere proven against 7.62 mm (0.3 inches) AP rounds, however the back and turret roof were only thick enough to withstand 7.62 mm ball rounds, standard small arms fire. This, however was completed by a collective NBC protection, and automatic fire suppression systems in the fighting and engine compartments. 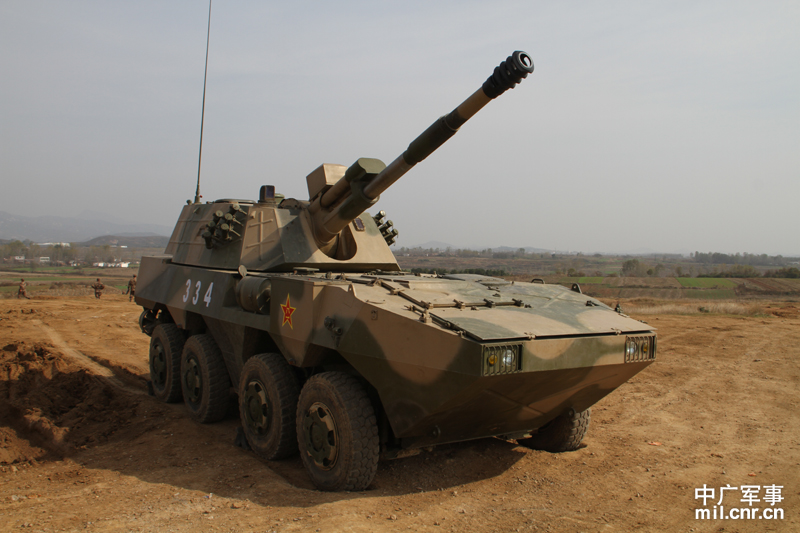 The PLL-09 SPH is given a font-mounted Deutz BF6M1015C turbocharged diesel engine, Chinese built, but German under licence. It was rated for 440 hp. In addition, the vehicle is fitted with a centralized tyre pressure regulation system, helping on soft and hard ground. The hull is also fully amphibious, its propulstion assured by two orientable waterjets aft (with the wheels motion in addition). The crew comprised from four to five men, including the driver, commander, gunner, and up to two loaders/mechanic.

Like other vehicles in the family, the PLL-09 can traverse cross-country easily enough thanks to its 8x8 wheeled configuration, oversized run-flat road wheels, and high ground clearance. The crew of three is modestly protected in light-to-medium armor which aids against small arms fire and shell splinters. Since the vehicle is not intended for frontline, direct line-of-sight combat, this is acceptable. The real value in the system is in laying down fire through in-direct, non-line-of-sight action behind the lines.

Much of the form and function of the original ZBL-08 is retained. A diesel-fueled engine powers the type to speeds of 100kmh out to a range of 800 kilometers. A semi-automatic transmission system is mated to the engine. An amphibious quality is built into the truck, allowing it to traverse water sources with little preparation.

The howitzer armament sits in the frontal face of the 360-degree traversing turret which encloses the gunnery crew and commander. The gun is fully-stabilized and comes complete with an integral recoil mechanism and multi-slotted muzzle brake. Smoke grenade dischargers are seen along the turret sides which help the vehicle provide its own smoke to screen actions against enemy eyes. An optional 12.7mm Heavy Machine Gun (HMG) can be affixed to the turret roof to protect against low-flying aircraft. The same vehicle can also sport a 155mm howitzer gun for even more improved fire support capability at-range. The PLL-09 is a common sight in PLA army actions, namely field exercises intended to train crews and assist in propaganda measures.


On Militaryleak.com -
The PLL-09 on Military-today - Norinco PLL-09 on militaryfactory.com

PLL-09 with a desertic pixellized pattern 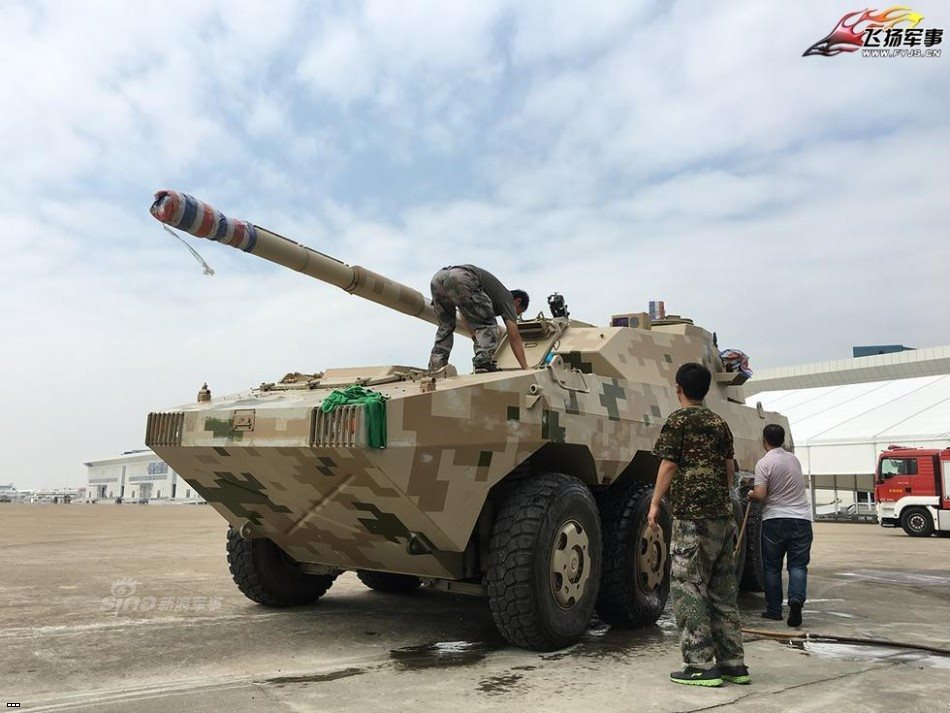