The Chinese tank development can be traced back to the fifties, well before the relationships with USSR were seriously damaged, and the former "great brother" became a potential threat. China PLA was first equipped massively with the most current soviet models, Type 58, which was a Chinese derivative of the famous T-34/85. Later came the first Chinese design, the Type 59, a basic copy of the T-54.

Next came the Type 62. During the Sino-Soviet conflict of 1969, one T-62 was captured and served as a base for a complete overhaul of the Type 59 which became the Type 69 (once again, resembling closely to the T-62). Both improved Type 59 and Type 69 MBTs were still in service during the eighties, after perhaps 15 000 of them has been built. Largely upgraded with western technologies, the Type 69 became the first generation MBT, Type 79. Then came the second generation Type 85 from North Industries Group Corporation, Type 88


Chinese MBTs of the 3rd generation 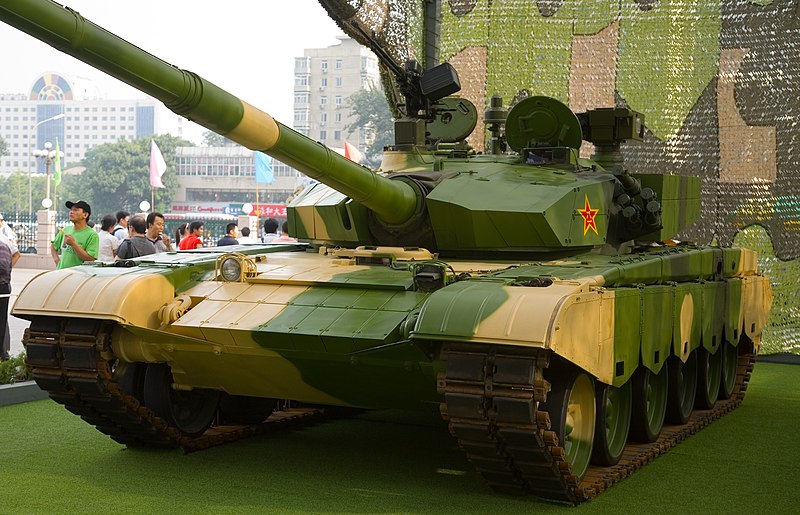 After years of improvements, the next second generation Chinese MBT was produced by North Industries Group Corporation (Norinco). The Type 90 was a domestic design, withe some Russian influence and Western technologies like a British diesel and French suspension system. For its attractive cost, like former generations of Chinese MBTs, the Type 90 was built under several variants for export. It became the Pakistani main battle tank, under the denomination of
Al Khalid. In 1997, the next second generation came as the Type 96, an improved Type 90 with experimental features tested on the Type 85-III. It was mass-produced, integrated a domestic reliable 1500 hp diesel and modular ERA composite armor. The third generation MBT can be traced back as 1981. The definitive design was approved in 1986, and a T80 inspired tank with a western style welded turret and better armor system was studied. The Type 98 came at the end of a long process, as in 1999, first displayed on the national day PLA parade in Beijing. The Type 98 was produced in small numbers and thoroughly upgraded, until being superseded by the Type 99...

The Type 99 was largely based on the Type 98, third generation MBT. Development of this model started in 2001, partly based on the Type 98 G. The main striking difference is the new improved turret, with front deflectors and a new composite ERA armor (which details are, of course, classified), as a new diesel water-cooled engine, which was capable of 65 km/h cross country and 0-32 kp/h in 12 sec. accelerations. Like Russian
T-80 tanks, it has a carousel auto-loader for its 120 mm main gun, and many features from the German Leopard II were adopted, like the side armour and the turbocharged 1,500 hp diesel derived from the German MB871ka501. Equipment included a laser warning receiver and a laser dazzler, laser rangefinder, wind sensor, ballistic computer, and thermal barrel sleeve, and the gun is aimed through dual axis stabilization. The commander has a display showing the gunner's thermal sight, and a powerful Thermal Imaging System (TIS) with x11.4 and x5 view magnification, and a complete computerized on-board information processing system at his disposal. Armament is composed of the 1985 ZPT98, a 50 caliber smoothbore, with an auto-loader capable of a 8 rounds per minute firing rate in auto mode and 41 rounds in reserve, including armor-piercing fin stabilized discarding sabot (APFSDS), HEAT, and HE-FRAG projectiles. The gun is provided with a thermal sleeve, and a fume extractor. The 125 mm variant is capable of firing a AT-11 laser-guided anti-tank missile, or depleted uranium rounds (DU).

The main variant is the Type 99 KM, started in 2010 as a major upgrade for all Type 99s. The Type 99 G was introduced in 2007 or 2008, and is equipped with a new observation and active protection system (APS), with a a possible independent commander thermal imaging viewer. The Type 99 A is an upgraded version of the Type 99G, but few details are known. The Type 99 A1 has a newly design turret roof, which is currently lower. ERA panels are extended around the turret, and hull sides. Other upgrades are mostly computer systems changes. The Type 99A2 was on trials as of 2010. It included many changes of the turret design, gun aiming device, electronics components, armour, suspension, and even the diesel engine. it is known as the ZTZ-99 A2. Next production version in under way at Norinco. Total combined deliveries of the Type 99 are around 250 units as for march 2012. They are currently forming the spearhead of the PLA armored divisions.

Links on the Type 99

With a new German Leopard II based, water cooled diesel, this tanks has a power-to-weight ratio of about 27.78 hp/ton, which provides a far great speed than former models. Weight, depending on versions, is about 54 to 58 tons only... The 120 mm ZPT98 main gun can be replaced by a 125 mm capable of firing anti-tank missiles with folded wings. Armour is a standard equivalent to the third generation western and Russian MBT, electronics and computerized systems are also of high standard, making this little machine a very expensive one, at 16 million yuan apiece (equiv. to 1,6 M Euro or two M dollars...).