From the 1970s to 1995, Italy's main battle tank was the US-built M60A1, with some more modern Leopard Is. It was already envisioned to replace the aging M60s in 1985, and the prototype of the C1 was revealed in 1986, named "Ariete" (Ram), honoring the famous ww2 Italian armored division which fought alongside the Afrika Korps from 1941 to 1943. The project was developed by a consortium made of Iveco-Fiat and Oto Melara (which had also experience building the Leopard under license), while many subcontractors were engaged. Final assembly and tests were performed at La Spezia (next to the naval base and arsenal). Specifications asked for a fast, day/night, accurate fire-on-the-move vehicle with the most sophisticated fire control system (FCS) available, thanks to many sensors and a centralized digital battle system computer. 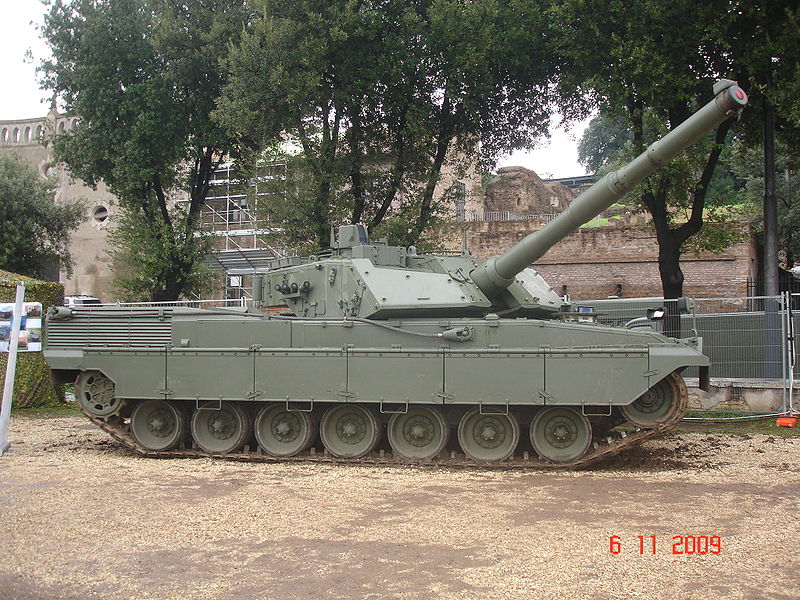 The hull, designed and produced by Iveco bears some resemblance to most western MBTs but is slightly smaller, helped by the compact engine. Compartmentation is standard, with the driver at the front left, engine at the rear and fighting compartment in the middle. The hull frontal glacis is well sloped, but the sides are flat, with a raised rear engine deck, starting after the turret ring. The drivetrain comprises adjustable drive sprockets at the rear, idlers at the front, seven paired roadwheels suspended by torsion bars with suspension arms, hydraulic shock absorbers, friction dampers, and four return rollers on each side. There are mudguards with protected headlights above and armored side skirts made of six individual panels. Many parts of the chassis are directly inspired by the German Leopard 2 MBT (and use similar components). The armor is Classified, comprising laminated steel/composite plates and inspired from the Challenger and Abrams. Ground clearance is 0.44 m (1.4 ft) and the hull, fully NBC treated, could be completely sealed to ford rivers over 5 meters deep. However, due to its lightweight hull, the Ariete can cross most Bridges in Europe. 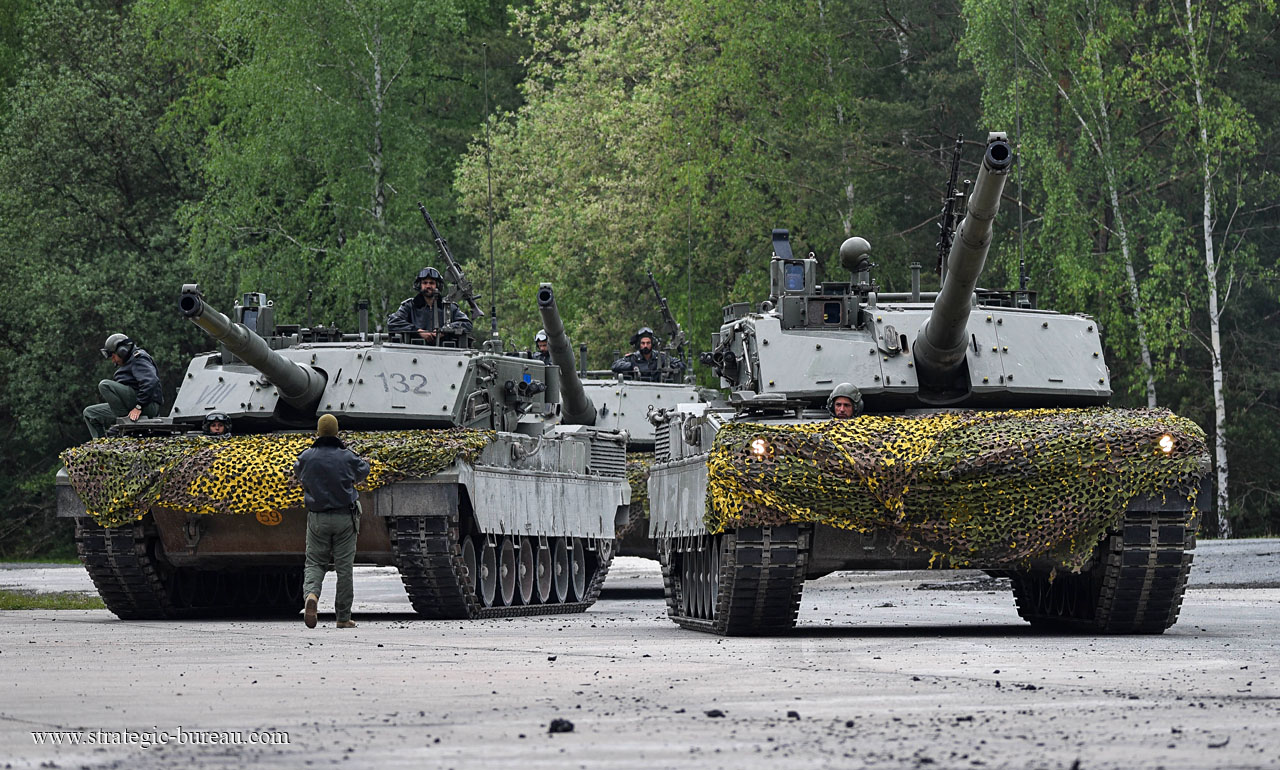 The turret, developed by OTO Melara, as the gun and fighting equipment and electronics, looked similar in shape to the one used on the Challenger, with a well-sloped front and short lower beak to reduced short traps effects. There are a loader and a commander's cupolas. The loader or gunner's one is equipped with a ring-mounted standard NATO MG 42/59 7.62 mm machine-gun while another is coaxial to the main gun. The latter is a standard NATO 120 mm caliber, autofrettaged and stress-hardened main gun developed by OTO Melara and firing APFSDS-T and HEAT and other standard ammunition, 27 being stored left to the driver position and 15 in the rear turret bustle. The gun has a thermally insulating sleeve and fume extractor and is stabilized in three planes by a digitally commanded electro-hydraulic drive.

The turret is also equipped with side-mounted, electronically fired grenade launchers either for chaff or smoke grenades, for active protection against missiles. The Galileo Avionica OG14L3 TURMS FCS have a day/night panoramic SP-T-694 primary sight for the commander and a stabilized platform including a thermal sight and laser rangefinder for the gunner. A Digital fire-control computer-assisted with many captors ensures to give targets coordinates at all times and conditions, including the barrel temperature and wear. The commander is given a panoramic "hunter-killer" set to designate and treat all kind of targets. Range and quick elevation are set up to destroy low-flying targets like helicopters. The night thermal sight, shared by the commander, could resolve a 2.3 x 2.3 m target from a distance of 1,500 m.

The six final pre-series prototypes were ready by 1986 and thoroughly tested, including a 16 000 km test run. However modifications and settings before the production could be geared up meant delays and despite a 1993 original schedule, the first true production vehicles were delivered only by 1995. 200 has been produced until August 2002. Production lines are now stopped but kept possibilities for extra deliveries. 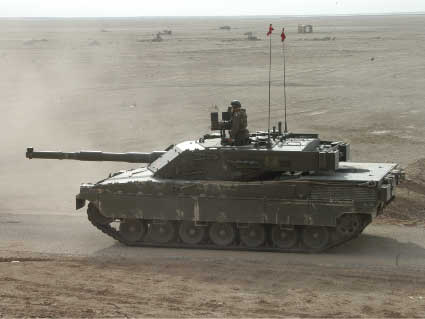 Due to the nature of the V12 FIAT-Iveco, a greater RPM was needed to obtain better performances, at the cost of more wearing of the components and their shorter lifespan. Reliability problems emerged but these were compensated by greater speeds, and IVECO started in the 2000s to upgrade the engine, with lengthened strokes (30 litres), a new common rail direct fuel injection system and a new double turbocharger, giving a max output of 1600 hp at 1800 rpm (1200 kw), and electronically controlled torque to spare the transmission. OTO Melara is also aimed at upgrading the armor, with its new adjusted sets first shown at Eurosatory 2002. Due to financial delays, these upgrades were long postponed but are currently scheduled for this decade.

Currently release in 1995, this tank did not take part in an engagement like the first gulf war, but was deployed in peace-keeping operations in Yugoslavia. The Ariete Mk.2 (or C-2?) was revealed in 2002 and is scheduled for production in the 2015-2020 timeframe with an autoloader, new hydropneumatic suspension, modernized FCS and additional armor. 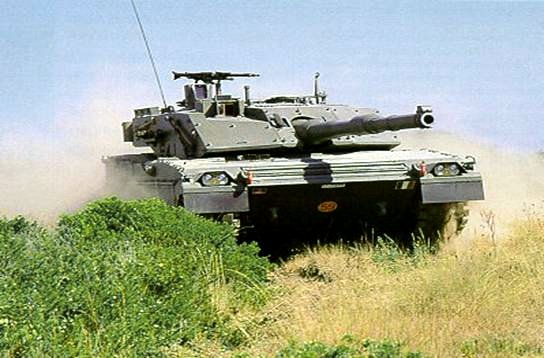 The Ariete MBT on Wikipedia
The Ariete on military-today