An American answer to the Renault's FT 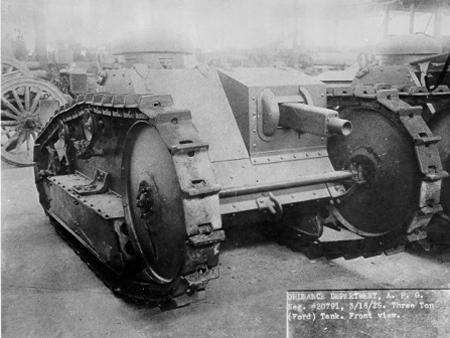 Design on the 3-ton tank started in mid-1917 at which point the American tank forces, newly created to cover the expeditonary corps, were equipped with British or French tanks only. The 3-Ton was seen as a "swarm" light two-man tank designed to replace the Renault FT for upcoming battles, designed as a cheaper alternative by Ford for the FT.

US Observers in France reported on the Allied use of Tanks in 1916 at the Somme and by the French in 1917, and American enthusiasm for the these however was not shared by the "old guard" in the US Army’s upper echelons. However, as soon as General Pershing and his staff arrived in France for more observations before the arrival of the American Expeditionary Force, the attitude quickly changed and plans were made for a tank corps to be mounted in support of US troops, with -ideally- American tanks. This was all done from scratch, but a young Captain George S. Patton proved instrumental about shaping the early doctrine. He quickly praised -as a cavalry officer- the French Renault FT for its speed and agility compared to the lumbering British machines, and seeked to combined both models (which were provided to the US Army) in new tactics.

By December 1917, Colonel Samuel Rockenbach headed the new US Tank Corps. It was soon agreed that the expeditionary corps would be given French and British modelms until agreements were found to provide US models. One of these early endeavour was the Renault FT to be licenced-built, and a heavy tank to be built on a largely British design but US engines, to be built in the factory in France (The Mark VII Liberty). However in alternative to the licenced FT, by early 1918 Henry Ford from its own initiative conducted a study to provide fast, a cheap and simple infantry tank. The Ford automobile company started work on a new light tank close to the ideas expressed by Patton. One assumption was that an even more compact near one-man tank could be built, turretless to avoid stabiity issues and technical complications, and assuming these wouild only be used on offensives. Soon, placing two men in tandem made the vehicle broader, but shorter. 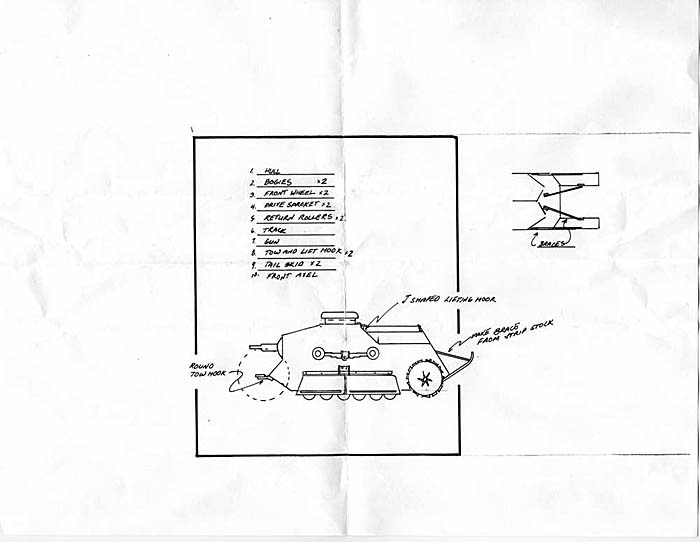 The "M1918" (it never received this deignation as never in service), was to be armed with a single caliber 30 machine gun, in a ball mount with limited traverse. The 3-ton tank also had a large front hatch positioned in front of the driver's position, with a large cupola on its top, dotted with with vision slits. That was the only way to see the battlefield, otherwise the vehicle was practically blind. On the right was seated the gunner. Like the French tank, the crew was at the front and the engine compartment at the back. The idea of a dedicated powerpack was brushed aside for cost issues and instead a pair of the very affordable Ford T gasoline engine was to be installed. In total, the M1918 proved much lighter and smaller than the FT, just was 14 feet in length, not counting the indispensible trench skid at the rear.

The nimble tank was of course to be propelled by Ford engines. But in that case, two common automotive Ford Model T engines were used. Both were controlled by the driver via a single common clutch. They were served by a Ford planetary transmission, which was enabled two speeds forward, and one reverse. The power/weight ration was just 10.4 hp/ton, for a top speed of 8 mph, and with an operational Range of 35 miles. The steel tail fitted at a the rear was intended to traverse wide trenches as they were known in 1917, but in 1918 the Germans managed to create specific antitank trenches that were five meters wide or more. They would have been crossed by the Mark VII Liberty, and last "tadpole" and "star" British heavy tanks only, which were essentially breakthrough tanks. The nimble and fast 3-ton would have been an "exploitation" cavalry tank, although speed was below expectations.

The drivetrain comprised long links type narrow tracks. Very large idlers were at the front, with twice smaller drive sprocket at the rear (as on the FT), while the chassis rested on two sets of three roadwheels, circulating into the tracks, which used an "U" configuration.

These two sets of small roadwheels were protected by a stell boxy superstructure, comprising mud chutes and the main leaf-spring suspension, completety encased in the structure. The tracks were returned by two return rollers, identical to the roadwheels, but resting on a leaf-spring. Soon, mobility issues started to appear. As it was even shorter than the FT, the Ford 3-ton prove dunabkle to gap the new German trenches built in the Hindenburg line. They would have to rely on the use of fascines as pioneered by the British. The vehicle being larger, they also offered more target to the enemy.

it was minimal, to keep manufacturing simple and cost and weight, low. It was 6 mm thick, slightly sloped at the front, to offer some deflection and extra thickness against small arms fire and shrapnel. Also, the tank had an exposed front axle, just in front of the hull, easy targets and shell traps. To add to this, the narrow tracks would have seen the tanks likely bogged down, and therefore easier immobile targets.

Aside the driver seated at the front, was a gunner, beside him, who controlled a .30-06 (7.62 × 63mm) standard machine gun, either an existing M1917 Marlin, just entering service, or later, the M1919 Browning machine gun. The only issue contrary to a proper turret was their limited-traverse mount. Indeed, there was some control of the traverse inside, and a greater elevation thanks to its partial "ball" mount. Due to the limited size onboard, the machine gun was to be provided wtih several belts, reaching a total of 550 rounds of ammunition, including tracers.

The initial production setup to figteen (15) vehicles in all, and one was to be sent to France for field testing, and venture possibly on the front. A contract for 15,000 was awarded to Ford on September 1918. Meanwhile, the U.S tank corps went back with a report starting the new tank was not meeting the requirements they wanted. Instead, Ford was already converting the FT under licenced in what would become the M1917 Tank of which 950 were ultimately built by Van Dorn Iron Works, Maxwell Motor Co., C.L. Best Co. in 1919, constituting the bulk of the peacetime Tank Corps during the interwar. The contract for the 15,000 tanks was cancelled after a meeting between the general staff and congress at the Armistice. This axe blow left the army with just fifteen original pre-production Ford 3-tons tank ever produced, not even the first fifteen batch.

The French wants it as an artillery tractor 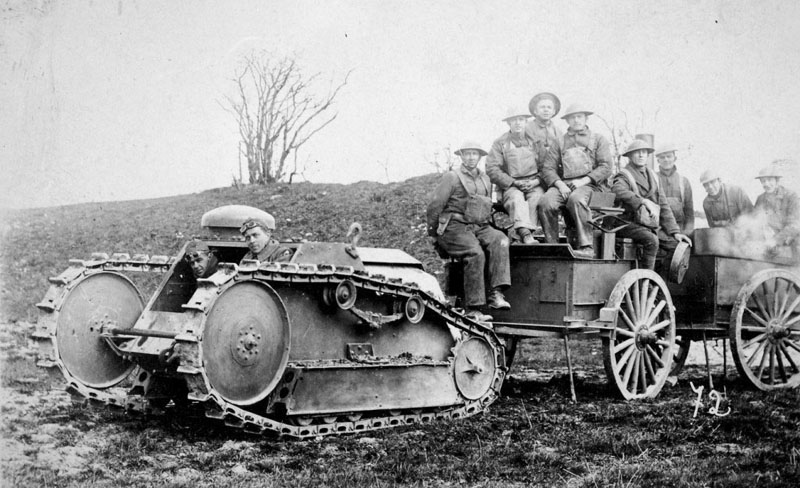 Used as tractor tank with US troops, 1918 (reddit). Note the front plate as been removed entirely, as well as the armor, machine gun, leaving the idlers axle even more exposed.

While it was in France in 1918, the French Army also evaluated the Ford 3-Ton tank. Givin the industrial might of Ford, several folds above Renault, the French general staff was indeed quite interested by a possible adoption of the new model. However after being tested on the field and evaluating its general performances, it was thought inferior to the already existing Renault FT, despite a much smaller cost. But however they seen its chassis with great interest as a cheaper alternative to Renault FT chassis already used to carry various ordnances.

Indeed, General Estienne at this point estimated the 3-Ton Tank could either carry a 75-mm for direct battlefield support, or be used as an artillery tractor, also towing the 75 modèle 1897. Based on this, Ford received an order for 1,500 3-Ton tanks, but soon the Armistice put an end of any production start or delivery. This order too was cancelled.

Another video of archives footage

One of the prototypes 3-ton tank tested in France, without any markings 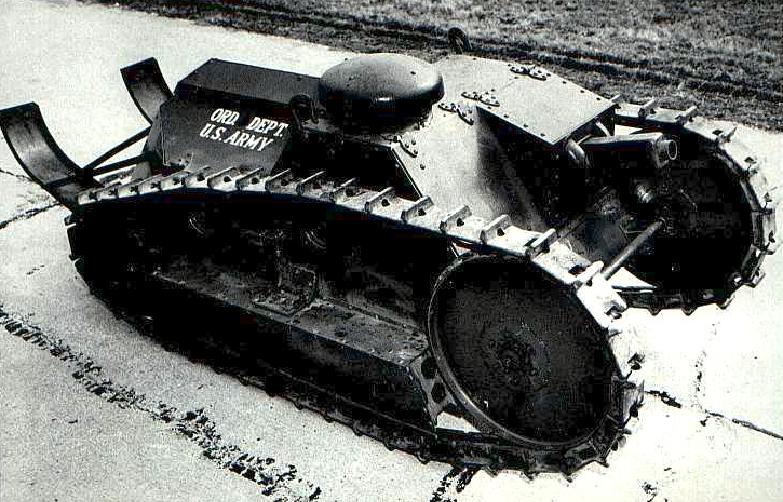 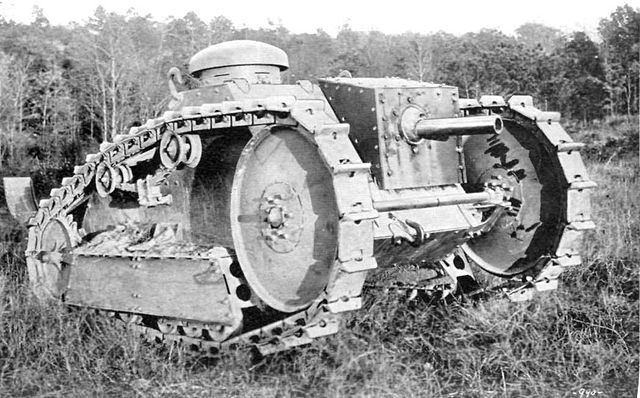 Naked chassis of the prototype