The designated successor to the Greyhound

The T17 Armoured Car, sometimes referred to as the M5 medium armoured car and by the British as the Deerhound, was an American armored car produced during the Second World War.

The T17 Deehound was a specific medum armoured car program intended for armed reconnaissance in 1942. Both Chevrolet and Ford competed but the simpler 4x4 Chevrolet design (future T17E1 Staghound) won. The 6x6 T17 Deerhound sometimes called "M5 medium armoured car" was never standardized, its production of 250 vehicle only meant as a stopgap until the M8 greyhound was mass produced. It was used from 1943 by the United States Army Military Police Corps and a few were given to Brazil. Meanwhile the T17E1 was liked by the British that obtained a mass production, and it made a fine career.

The T17 Deerhound was one of the "hounds" (with Greyhound, Staghound, Wolfhound and boarhound) that were produced in large (for the M8) or limited series throughout WW2. When entering the war, the US Army had no dedicated reconnaissance armoured car, well protected, with advanced all-terrain features, and an armament sufficient to deal with threats up to the light tank level. There were crossovers with a program to built a tank destroyer to replace M6 37 mm gun motor carriage with the T22. The T17 Armoured Car was developed by Ford and submitted to meet the 1941 Ordnance Department requirement. This aimed to providing the US Army a medium armoured car. The other contender being the 4x4 Chevrolet T17E1 Armoured Car (future Staghound). In the early 1940s heavy, medium and light armoured car designs were all scrutinized, but in an effort to reduce the number of competing programs by October 1942, the Army Ground Forces created the Special Armoured Vehicle Board ("Palmer Board" as it was led by Brigadier General W. B. Palmer), hoping to impose standardisation. The latter indeed recommended after comparing designs to scrap all programs but the Ford T22, standardized and amss produced as the M8 Greyhound.

On the other hand, the British Purchasing Commission show interest early on in these designs and soon settled on the two medium ones, for its campaign in North Africa, which was ending already. The US Army Desert Warfare Board was soon contracted to start a serie of trials with two designs were completed by February 1943. However, the T17 was tested at Aberdeen in March 1942 already. The first pilot was sent to Fort Knox while Ford provided a second one with many modifications, but it suffered a catastrophic transmission failure during trials, rear axle problem, gearbox problem and other issues, while engineers worked on a three-man version of the main turret. Eventually mechanical problems led to an abrupt end to the testings. New requirements for a new transmission, differential, gear ratio, were eventualy not followed by Ford. It was decided that it would have performed poorly as a reconnaissance vehicle.

The Chevrolet T17E1 ended as the clear winner of these comparative tests but still Ford was authorized by the US Army to complete a production run of 250 vehicles, mostly as a stopgap until the M8 own production was ramped up. The first batch of 32 T17s arrived by December 1942, and the remaining 218 in early to mid-1943. The US Army ordnance always called it the T17 as it was never standardized, but in some case, it was referred as 'M5 Medium Armoured Car'. Like the M8 this vehicle was given a 37 mm main gun.

Design of the T17 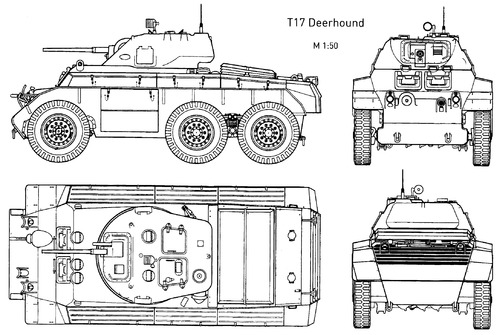 The T17 Armoured Car was relatively close to the T22/M8 in general appearance. It was a turreted 6x6 armored vehicle carrying a crew of five comprising the driver, co-driver, gunner, loader and commander. The T17 and T17E1 used the same turret from Rock Island Arsenal. It was tailored design to carry and operate a large variety of gun mounts, and were compatible with the M3 Lee medium tank's own turret. It was cast in two pârts with a bolted on front plate and bolted roof plate. By default the engineers settled on a 37 mm M6 tank gun, plus its coaxial .30-inch M1919 Browning machine gun. A second was mounted in the bow, inside a ball mount. Bewteen the coaxial 0.30 coaxial in the turret and 0.30, bow-mounted a crew of five was really necessary and it became standard practice in US armored vehicles. Nothing was planned for the turret however, which could have received a pintle mount close to the commander's hatch, either for a 0.5 or 0.3 cal. There is a Ford photo showing a pintle mount at the back of the turret however.

The T17 armor scheme comprised a well-sloped glacis plate forward, and sloped sides, plus a relatively flattened hull roof line. The turret was in the center and the engine room at the rear, containing both Hercules JXD gasoline engines. The turret front had a bolted-on plate allowing to quickly change the main armament if needed. The whole construction was welded, and the turret was appreciated (contrary to the M8) for its better protection. It was designed initially for the M3 as a two-man model in Brituish specifications and was appreciated enough to be reused for both the T17 and T17E1. The M8 open top turret on the other hand was mostly meant for reconnaissance purpose. The T17 and T17E1 turrets were more suitable for intensive combat zones, albeit loosing in visibility. Both the commander and gunner anyway had their own hatches and selectable height seats. There was an observation slit left of the main armament, and two small hatches on the side of the turret, with one given a sight slit to the left side. The central hull had slight slopes on either side, one hatch at the level of the turret basket, and a large storage bin at the other, in addition to the large catwalk built over the main wheeltrain, each supporting three storage casings.

These were connected to an hydramatic transmission, the drives served by a gearbox with 8 speed forward, 2 reverse. Like for the Staghound, each wheel was powered individually. Range was 450 mi (720 km), versus 450 and 350 (for the M8). The T17's 6x6 wheeled arrangement saw two rear-mounted axles and a single frontal axle with could springs. On the mobility standpoint, the Ford design used a more advanced, a 6x6 wheeled configuration, than the Chevrolet which uses a 4x4 wheeled arrangement for the Staghound. The T17E1 was indeed selected for service, in British hands and had a long and active wartime career. The U.S. Army on its side had a M8 "Greyhound".

The British Army initially secured production of the T17 and deliveries started in October 1942. At the same time, the U.S. Army commissioned another stock of T17 cars as "insurance" in case of delays for the productin of the M8. The US Army own evaluation, compared to British ones, in fine eliminated the T17 vehicle, showcasing its limitations. The M5 was therefore never produced, which became clear once production of the M8 reached sufficient levels to dismiss any concern of cancellation. The British also were confirmed in their selection of the competing T17E1. This removed any hopes of seeing the T17 committed to any wartime theater. The 250 examples were not enough to justify a new entry on the very rigid US ordnance organization, so like the M2 medium and M6 heavy tanks, the T17 never left the continent.

Soon, their main guns were removed and they were assigned to the United States Army Military Police Corps, patrolling the continental US close to sensitive sites. However, Brazil eventually was given in 1942 some military aid, and obtained a batch of twenty T17, all with their gun back. They were used for military police, again relegated to roads due to their poor off-road performances. One survived to this day, now exposed in Porto Allegre. The T17E1 should have been condemned also in December 1942 but was saved by the britis which insisted to maintain its production. Due to the fact it was never standardized in the US Army, the vehicle retained its prototype designation T17E1, but was known in british service the "Staghound Mark I", making a superb career in 1943-45, notably in Italy.

Links about the T17

Right side of the T17 Deerhound, showing its hull access hatch

M5 Medium Car, if ever put into service.

T17 rear view, with the US Army desert test team.