Known as the Lehký Tank vzor 34 (or "Light Tank Model 34"), this vehicle was the first "true" Czechoslovak tank, as opposed to the previous vz.33 tankette. However, it still used the old Carden Loyd suspension. Previous tests with rotating turrets tankette chassis all failed. Škoda's engineers decided to develop a brand new local model instead. In all, 50 were built. They would constitute the blueprint for the better known vz.35, itself replaced by the excellent vz.38. Unit cost was about 413,330 Czechoslovak koruna in 1934.

In 1931, Ceskomoravská Kolben-Danek was ordered to build the first prototype. It was completed and presented in November 1932. After successful tests, an order for 50 was placed on 19 April 1933. The first six were pre-production models, due to be delivered in 30 September 1933. A batch of 24 was to follow in 1934 (hence the name), and the next 20 were due on 30 July 1935, but delays occurred. There were critical problems with the armor plate quality. The steel plates were delivered by Poldi.

The pre-production models were only delivered on 23 April 1934. Further delays were also caused by the Army's rejection of the initial armament proposal of a 4.7 centimetres (1.9 in) Vickers 44/60 gun and two ZB vz. 26 machine-guns. Therefore, the initial design had to be rethinked and was ready on December 1933. The six pre-series vehicles had the originally planned ZB vz. 26 machine guns and were to be taken over in the summer of 1936 for standardization. The last tank was delivered in January 1936. At that date, they were already obsolete.

The small turret had a 1.265 m (49.8 in) ring, with 15 mm (0.59 in) thick plates on the sides and 8 mm (0.31 in) on the roof. It was manually traversed (3° per handle rotation). The traverse could be disengaged from the crank, allowing the commander to shoulder the turret freely. The commander's vision was aided by four episcopes and a monocular mirror on the cupola. Furthermore, a 1.3 x 35° periscope could be raised when in buttoned-up position. Since the turret housed a 37 mm (1.46 in) gun and coaxial machine gun, the commander had to give orders, communicate with other tanks, scan for targets and threats, aim, fire and reload the main gun as well as the machine-gun.

Compartmentation was straightforward, with the driver located at the front-right, the radio operator/gunner at his left, and the commander/gunner/loader behind in the one-man turret. The driver was given a 300x75 mm (11.8 in × 3.0 in) observation port, protected by two flaps. The upper one was given an episcope with a 25° field of view, connected to an armored outer flap with a 3 mm (0.12 in) slit. Right next to it was a 120x3 mm vision slit with 50 mm (1.97 in) of bullet proof glass, and a padded inner flap for the driver to rest his head on. The radio operator (left) was given a 120x50 mm (4.7 in × 2.0 in) vision port with 50 mm bullet proof glass sight, and an armored shutter. The radio was located to his left on the wall. The machine gun was slightly off-set to the right, mid-range between the two, with a ball mount with 30° of traverse, +25°/-10° elevation. The protruding part of the gun barrel was armoured. Sighting was provided by a spotting telescope or open sights. Tis machine-gun could be fired by the driver if need be, using a Bowden cable when it was locked in position.

The hull machine gun was a Zbrojovka Brno 7.92 mm vz. 35, a famous, compact (fortress) medium design later adopted by the UK as the Besa. The second one was coaxial, firing tracers. This model was gas-operated, air-cooled, 21 kg (46 lb) when empty. It was fed by a 225 round metal link belt firing 7.92 × 57mm Mauser cartridges at 500–800 rpm on average. Provisions for the LT vz.34 were about 2500 rounds. It should be noted that the coaxial had its own ball mount than could be coupled or used independently to the main gun. Elevation/depression was +25°/-10°.

The engine compartment was separated by a 3 mm (0.12 in) firewall, still fitted with a small internal access door. Ventilation openings could also be closed from the inside. The main engine was a 6.08 liter (371 cu in), water-cooled, inline 4-cylinder Praga that gave 62.5 horsepower (46.6 kW). It was fed by a gasoline-alcohol mix. Top speed (road) was 30 km/h (19 mph), 15 km/h (9.3 mph) cross-country. There was a 64.5 litres (17.0 US gal) fuel tank on each side of the engine. Therefore, operational range on average (road/cross country) was about 160 kilometres (99 mi). The planetary gearbox had four forward gears, one reverse connected to the front-mounted drive sprockets. 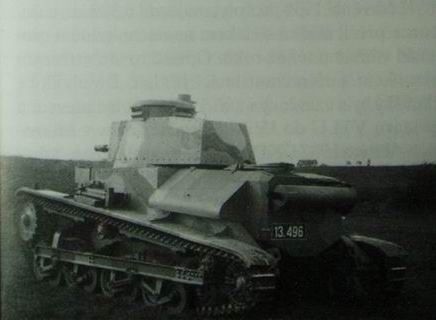 
The suspension consisted of two small road wheels fastened together on a frame. Two frames were paired and sprung by leaf springs, which constituted a wheel carrier. Two wheel carriers were present per side. There were also two return rollers and wooden metal-lined frames for track support. The rear-mounted idler wheels were used for adjusting track tension. Ground pressure was light, only 0.5 kg/cm2. Field performance showed the LT vz.34 could cross a ditch 2 m (6.6 ft) wide, climb a 80 mm (2.6 ft) obstacle or ford 80 cm deep river. Rarely mentioned was the fact it could also cross over 18 cm (7.1 in) thick trees or breach 50 cm walls (20 in).

The LT vz.34 had three operators, despite their fighting capabilities becoming dubious by the 1940s. The Czech Army quickly realized that the 15 mm (0.59 in) armor was just not enough to deal with the then standard 37 mm (1.46 in) guns or even heavy machine gun and anti-tank rifle rounds. This led to the design of the LT vz.35, which was basically an improved version of the LT vz.34. However, for the fresh Czechoslovak armored corps, this was an opportunity to deal with more modern tanks than the old WWI-famed FTs in service.

They filled the three armored regiments (9 to 24 tanks each), before being replaced in the later half of the 1930s by the vz.35. They were still used for training after 1937. After 1938 and the Munich agreement, the Army tried to sell these, without success. They were then used to form the third Armored Regiment in Slovakia. Only 18 got there before the German invasion. The German Army seized 22 LT vz. 34s, but as no record of a Panzer 34(t) exist, it is believed that all of them were scrapped. Ten more were however captured by insurgents in the Slovak National Uprising of 1944, but did not saw action. They were in such a poor condition that, instead of being sent to Skoda for repairs, it was decided to scrap them as well. The Waffen-SS intervened to have them salvaged and sent to their puppet-allied Croatia and apparently two were indeed saved, while the turrets from the others were used in fixed fortifications on the approaches to Zvolen in March 1945. The only other active user of these tanks seemed to have been the newly formed Slovakian Armored Battalion "Martin" in 1939 (27 LT vz.34s). But they were gradually retired to be used for training only, as the unit was offered better tanks by the Germans for frontline duties.