During the interwar, Vickers proposed several vehicles in the hope of British army order to implement motorized units, as shown during the Salisbury Plains manoeuvers. After acquring Carden-Lloyd, Vickers soon proposed the Mark VI universal carrier as a main APC, well sold internationally, but a ligt artillery tractor was also needed, and worked on. The Morris-Martel proved a sound one-man tractor concept and a tractor was soon developed in 1927, tested in Britih Operational units; Vickers-Armstrong later developed from this the export-oriented Vickers utility tractor; A small unarmored tracked tractor tailored for towing light artillery and developed from 1928. It was refined into its definitive version in the 1930s and was proposed to the market. It was purchased by the Belgian armed forces and Royal Netherlands, for their East Indies Army (KNIL).

During WW1 already the British artillery started to be mechanized. It was clear that tractors were needed that could quickly towing artillery around the battlefield. Traditional wheeled artillery tractors were completely unsuitable in the rough, muddy and heavily cratered terrain of the no-man's land. Track tractors of US origin such as the Holt 75 soon were purchased, but when in action, failed to impress due to their very low speed. So Vickers started to work on a 18-Pdr Transporter. W.G. Armstrong Whitworth & Co. Ltd. designed the Dragon, a portmanteau combining from "drag gun" (or "cannon-pulling"). The concept of the vehicle, the gun was not towed but carried inside, and the crew sat also inside and facing each other. Development only ended in 1922.

This became, after acceptance, the first artillery Tractor from Vickers to be used in the British Army. The Dragon artillery tractor soon found its way in 1923-25 into all active units. The later Vickers-Carden-Loyd VCL family tractors were partially derived from it. Its Army official name was “Tractor, Full Track, Dragon”. The Dragon was further developed, whereas the idea of ​​carrying the cannon directly in the vehicle was abandoned. The merger of Vickers and Armstrong Whitworth in 1927 saw the acquisition of Carden-Loyd Tractors by Vickers-Armstrong, in March 1928. The latter associated with Major Martel, alrady produced a remarkable lineage of light tractors, and the Dragon was produced in large numbers and exported. Many variants and different sizes soon appeared, and the range was ratonallize netwen the Dragon light, and Dragon medium. 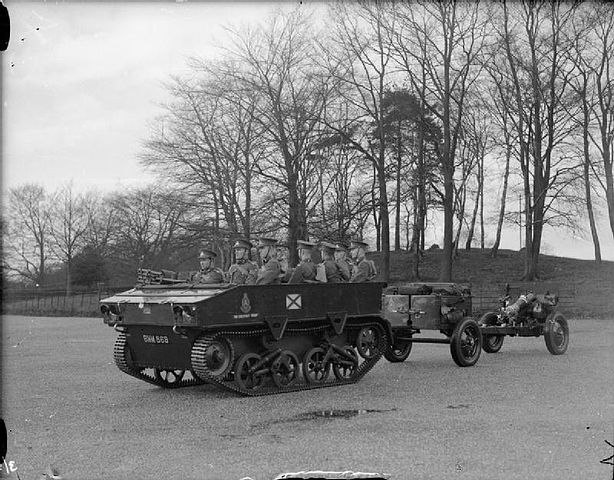 Light Dragon in manoeuvers, towing a 3.7 in howitzer, plus ammo trailer.

The Medium Dragon remained in use until the late 1930s; It was further developed into an armored infantry vehicle with firing ports, to potentially replace the Vickers Universal Carrier, but it stayed at prototype stage.

The Light Dragon MkII produced from 1924 was sound cheaper but still capable of towing a light cannon and was consider very successful. Only 69 of this Light Dragon MkIII were built. Production soon switched however to the Bren carrier, developed from the Light Dragon, later the "Universal Carrier". The Dragon Light built by the Royal Ordnance Factory was stil in use i 1940, and was vrought in France with the British Expeditionary Force (BEF), used operationally in the Battle of France.

The Vickers Artillery tractor (VAT) was an improved version of the Light Dragon and was built from 1933 to 1935. The driver sat in the middle. The VAT was shorter than the Dragon, and the tension wheel and the two top rollers were omitted. Technically, the vehicle was based on the Ford A and/or B models. The VAT was originally intended for the British Army, which mechanized in the early 1930s. Several variants were built in 1932 for infantry and cavalry units, but no major orders were placed. The VAT could tow a 40mm Ordnance QF 2-pounder anti-tank gun with front carriage, or a 76.2mm Ordnance QF 13-pounder cannon. Two versions were released which were officially designated as “Tractor, Light, GS Mk.I” and “Tractor, Light, GS Mk.Ia (HS)”. “HS” Stands for “High Speed”, this model was intended for cavalry units. The VAT artillery tractor was not armed.

Design of the Vickers VUT

The Vickers utility tractor was developed in 1928, as a small unarmored tracked tractor for towing light artillery. It was very boxy and just 2.13m long, 1.22m wide, and had a more compact engine. The driver was seated in the middle, with a stowage bin on front, and engine on the back. The latter could be accessed more easily. Large stowage spaces were created on both sides. Also either side of the chassis, metal caterpillar tracks were installed, with two running wheels in a bogie suspended by leaf spring. The drive wheel was located at the front, and the tension wheel at the back, also low enough to act as rear running wheel. The vehicle was unarmed but armour, with an overall protection of 7 mm in thickness. The driver, which body was expose dover the waist, was protected by folding armour panels.

The VUT was propelled by a 4-cylinder 3300cc Meadows, liquid-cooled, 51hp petrol engine. It was covered by a semi-open hood. The VUT had an empty weight of 2 tons. The engine was connected to a manual gearbox with 4 forward and 1 reverse gear. The gearbox was equipped with a disc clutch, drum brakes and a differential. The driver seated behind a screen, in the front center of the vehicle.

Soon, Vickers marketed the following:
-Cargo version (Completely unarmoured)
-Infantry version, armoured, for towing light artillery from infantry units (mountain and AT guns. Apart from some storage space around the engine there was no room for seated gun crew, which arrives separately.
-Cavalry version, same but for cavalry units. Due to engine modifications, it was much faster and lighter, while still armoured. This time, it had two rear-facing rear seats. Some storage space was created around the engine. This version could also be fitted with folding armor plates protecting the driver's seat from above.

The armored versions resembled the Dragon Light Mk II and VAT. The hull had simple angular shapes and a sloping front. But space in the back was quite reduced and again, the crew came as it could. 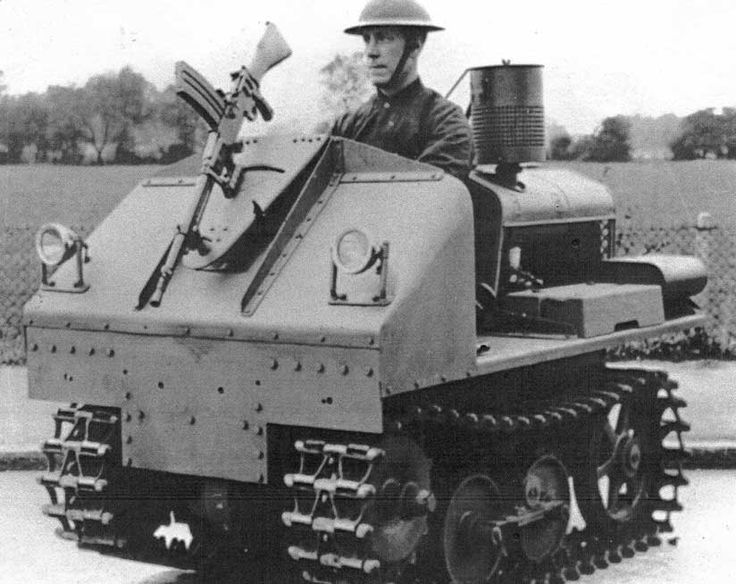 VCL Utility Tractors were used by the British, Belgian and Netherlands East Indies Armies. The Belgians had two built under license by S.A Ateliers de Construction de Familleureux in Belgium. There was any varintions of these tractors, the so-called "infantry" and "cavalry" versions. There differed by their superstructures and track types, track widths. For example the distance from track center left to track center right changed. 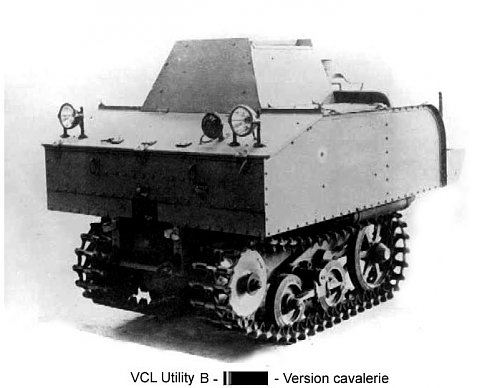 The VLC in action

When the Belgian armed forces realized mechanization of the army was needed in the 1930s, a purchase commission was setup to look at several designs. Eventually the British VUT won, and in 1934 the Belgian army bought 21 or 23 Vickers 1934 artillery tractors (VAT) from Vickers. These were intended as artillery tractors, towing the Bofors 75mm model 1934 mountain howitzer (Canon de 75 mle 1934) used for the Chasseurs Ardennais

The Belgian army became the sole user of the VAT, and this unit pout it to use in May 1940. Impressed by the VAT performances on both hilly and flat terrain, the Belgians also started to tow the 47mm anti-tank gun and also carry or directly as an experiment. It worked so well this motivated the creation of the the T-13 tank destroyer. 32 VATs were ordered in addition, used as a basis for the T-13 B1. The rest of the Belgian army rather preferred to use the smaller VLC, smaller and much cheaper. But they also used the Ford Marmon Herrington armored tractor.

The VLC in Belgian service 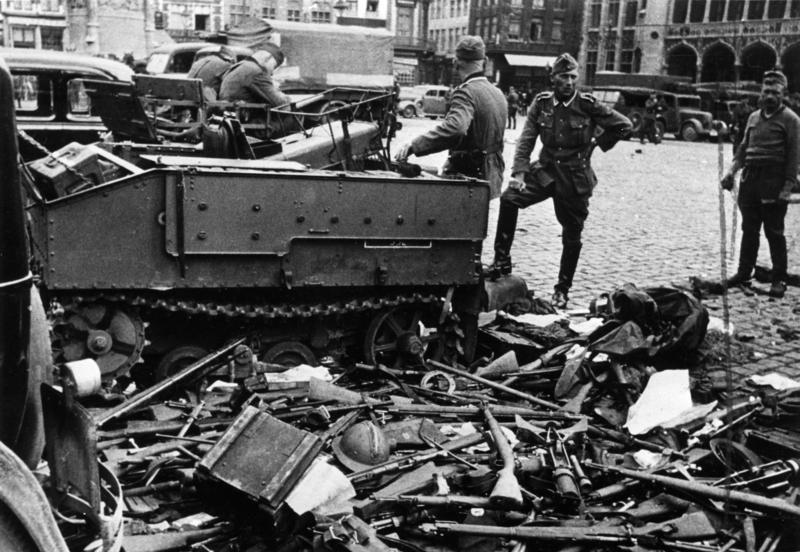 Belgian VUT after the capitulation. Note the folded panels

Impressed by the vehicle, the Belgian armed forces placed an initial order in 1935 for 277 vehicles. 177 were of the "Infantry" version, and 85 of the "Cavalry" version, plus 15 completely unarmored transport vehicles. Deliveries started in 1936, and that year, another 272 were ordered, this time of the slightly larger B version, to be built in Belgium, under license, at SA des Ateliers de Construction de Familleureux (ACF). The B version was a better "infantry" version which was larger, with wider tracks, and delivered in 1936-1937. A final order was placed in September 1939 for a grand total of 1000 VUTs delivered to the Belgian armed forces before the war broke out.


They were all used to tow the FRC] 47mm anti-tank gun. An anti-tank battery was created for cavalry corps regiments, each consisting of three platoons with two sections with 31 tractors. In an infantry division also, each anti-tank company used the same gun ("Company 4.7cm AT Div Inf"), with three platoons, two sections each, with 2 artillery pieces and 15 tractors. Each anti-tank company was made of two platoons, 10 tractors each. The Grenswielrijders and the 4 Karabiniers-Wielrijders regiments were also equipped with the VUT. In May 1940, the last VUTs were pending deliverey and trucks were used instead.

The VLC in Dutch KNIL service 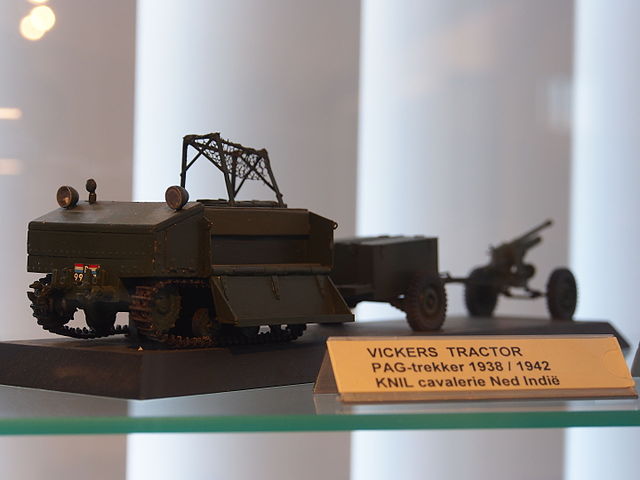 Model of the Dutch VUT

The KNIL ordered 20 B-type tractors from Familleureux in Belgium, in October 1939, plus 30 in December. The KNIL version differed bit its sides that could be folded down, creating 3 outward-facing seats on each side for the gun crew. The folded down sides worked as a footrest. The first 20 arrived in Java in April 1940. They were presumably assigned to the 2nd Armored and Anti-Aircraft Division (2 APLA), of the 2nd Infantry Regiment (KNIL), 1st KNIL Division in Tjimahi, West Java. They were used to tow the light Austrian 47mm Böhler anti-tank guns and the 20mm Rheinmetall-Börsig Flak 30 AA guns. These tractors were captured or destroyed by Japanese troops in March 1942 after the Dutch East Indies campaign. Some were re-captured by Dutch troops, which used them against Indonesian nationalists during the Indonesian National Revolution.

The VLC in German service

The Dutch and Belgian versions built in Belgium were captured in sizeable numers and used by the German Army as Artillerie Schlepper VA 601(b). I am not sure if and how many of these tractors were left behind by the BEF as I think they were no longer in front line use by the British Army in 1940. In May 1940, a number of tractors ordered by KNIL in construction were seized outright by German authoritoes and soon put into use as Art Schl VA 601(b). The slow tractors, especially the "infantry" version, did not keep up with Wehrmacht troops. Their only advantages were their small size and light weight. Production for the Belgian and KNIL were also confiscated, all vehicles being given the designation Art Schl VA 601(b). They were used as tractors and for transport, but also for driver training. Several were sent to the Eastern Front, put to ggod use during the summer, until the fall of 1941, towing the 37mm Pak 36, and 50mm Pak 38 anti-tank guns. Some survived until 1943. At least six are now in museums, more in private collections.

Dutch KNIL VLC tractor with its side banks open 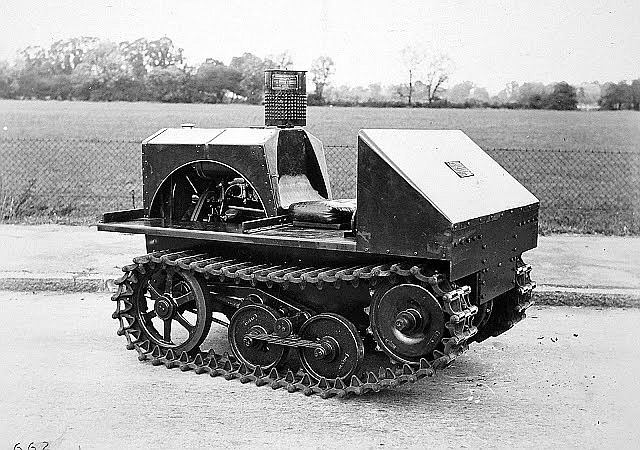 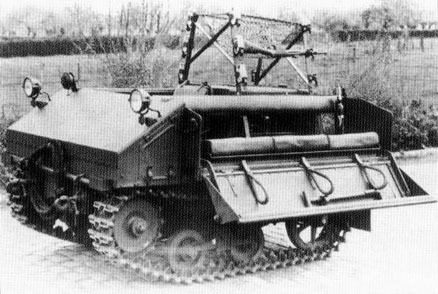 Early Vickers Utility Tractor for infantry, used as a "mule" with side stowage bins; src 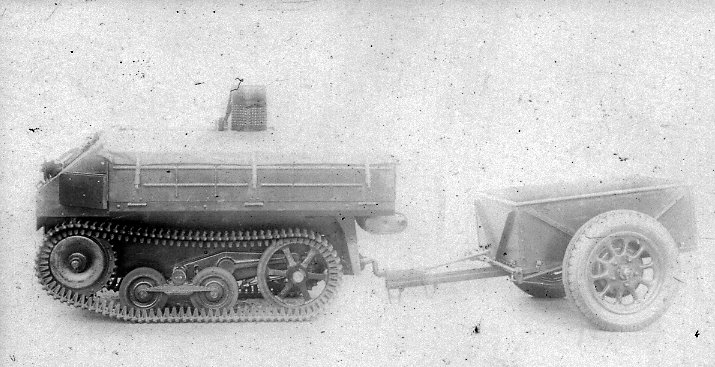 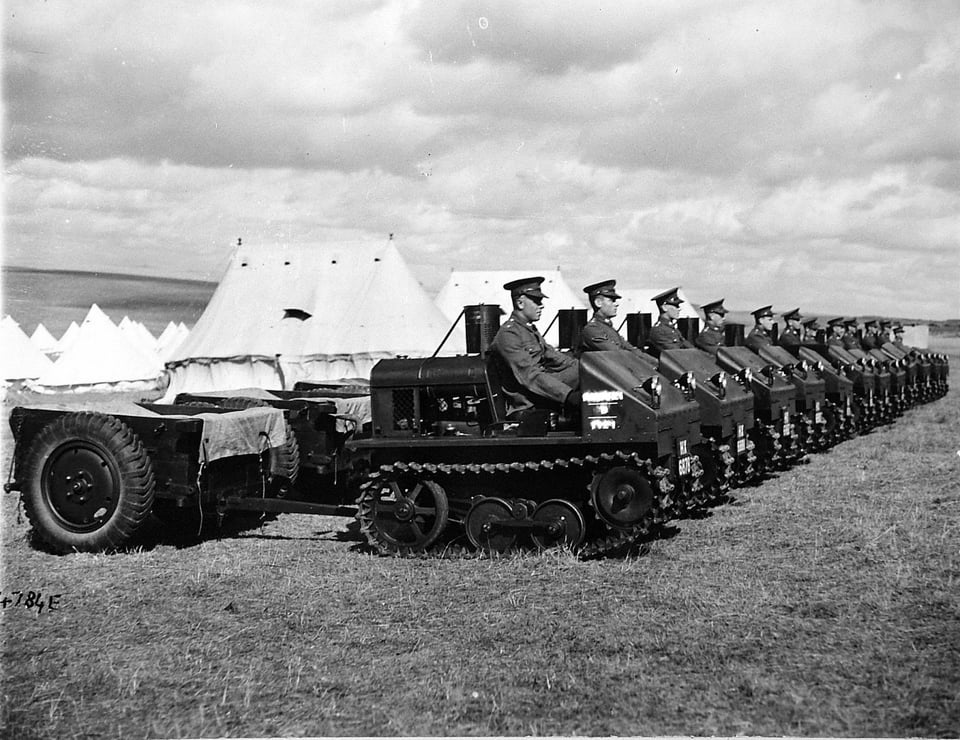 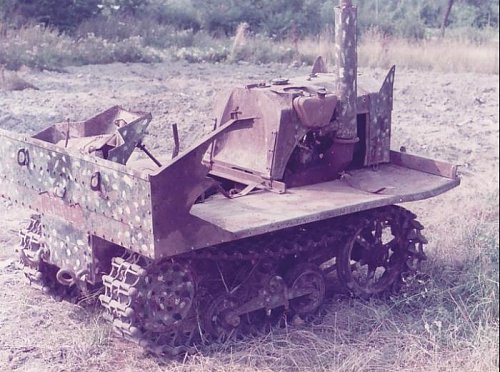 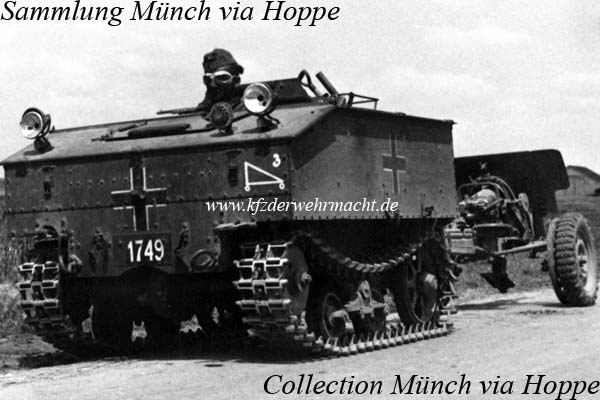 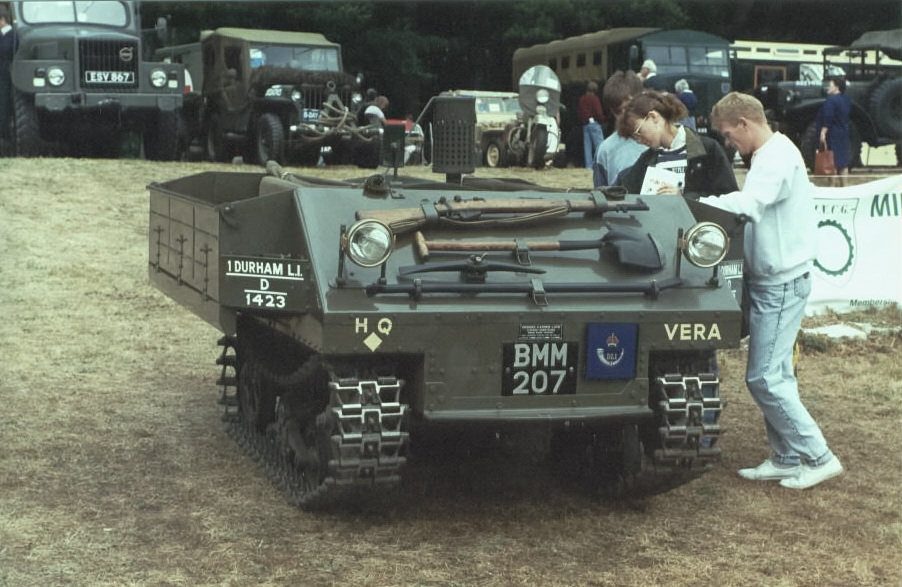 VLC during a reenacment at Rushmoor in 1989, restored and owned by Tony Oliver.