A Very Foggy Half Track. In the late summer 1940, the Germans made an assessement of all the vehicles they captured. Many were reused as is, others were converted, mostly to be used by local units, such those from the Baukommando Becker. These locally produced armored vehicles were very numerous, about 200, making additional classification for historians rather painful. Moreover, photo evidence is scarce, blueprints inexistant, making the reconstruction of these rare conversions difficult. Among these armored conversions ("gerpanzerte"), the small Laffly W15T was probably among the lightest German armored tractor/supplier in use in 1944.

The Leichte Radschlepper laffly W 15T(f) was a one-off conversion of captured French Laffly W15T artilery tractor. The latter was essentially a low-profile version of the S-15, produced in 1939-40 to circa 300 vehicles initially by Laffly, but due to the latter's limited industrial capabilities, the bulk of the production went to Hotchkiss, which also provided the engine, a 2,300 cc 486 petrol engine, which developed 52 to 55 hp at 3,300 rpm. Eventually 1386 were ordered to deliver before the end of september 1940, but in the end less than 200 came from La Licorne Hotchkiss facility by juin, many of these never making it to frontline units. The Hotchkiss W15 R was also developed later; but production was delayed. The vehicle was caracterized by its 6x6 configuration (the V15T was its 4x4 cousin) and two sets of extra rollers for impassable terrain. It was specialized for towing the 47 mm anti-tank gun model 1937.

Laffly V5T in saumur
After the Wehrmacht invaded France, they seized a large number of French armored and softskin vehicles, most if which were just lightly damaged or simply ran out of gas. In addition were seized industrial facilities an parks of brand new vehicles never deployed in active units. A commission was charged of examining all these vehicles and resorted that the Laffly W15T was very comparable to the German Krupp Protze and should be used as a substitute. Existing Laffly W15T were pressed into service with the German army, as well as the very close V15T. Many Laffly V15R, S15R, S20TL, W15T were captured and reused by the Germans. A small number of these however were armored as SPW (Spahpanzerwagen, recce armored vehicles), based on the W15T exclusively. They were produced for the Schnelle Brigade West. About 200 various German tracked vehicles were modified for snow cleaning Luftwaffe airfields by Laffly, and 22 wheeled and 33 tracked vehicles in snow ploughs. Other than that, a few Panzerspähwagen Wh 201(f) were former AMD Laffly 50AM and the Panzerspähwagen Laf 202(f) the former AMD Laffly 80AM armored cars. According to kfzderwehrmacht.de the captured W15T were called Leichte Radschlepper laffly W 15T(f) and used by the 305. Infanterie Division in France. 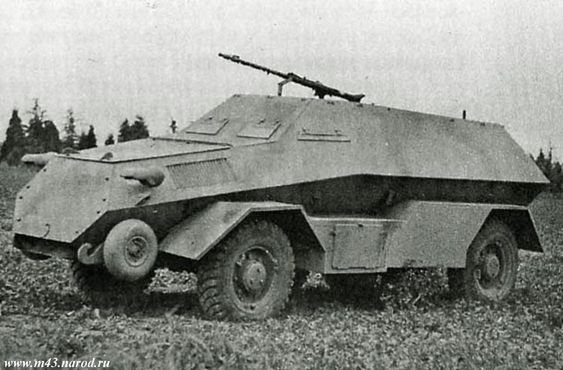 Also called Laffly W 15T gepanzerte (or "armored"), the vehicle was essntially an armored conversion of both the V15T and W15T, since according to remaining photos (only four), at least a single 4x4 was produced. Both shared the same armoured hull. Nothing is known about the engine, which was likely the original Hotchkiss 2,300 cc 486 petrol model, able to up to 55 hp. This was barely sufficient to support the weight of additional armor put on the vehicle. It seems the armor was the same, and that the intermediary additional roller axle was deleted, only the front one kept. Instead, large storage bins were placed.

The armored was reminiscent of Hanomag design for the Sd.Kfz.250/251 series. As deducted from the Ace model kit plans, the driver compartment had the same armored shutters as the regular Sd.Kfz.250 and a long nose, topped by a two-pieces armor plate, with the front upper plate hexagonal. The rest of the hull had a primastic section, also like the 250/251 series, a solution for the 6 mm plates to deflect bullets by artificially increase their thickness due to their angle. 6 mm at 30° for example made around 9 mm, making the hull impervious to small arms fire and shrapnel.

The driver and co-driver had two seats and the open troop compartment was directly behind, not separated. Each side had sitting banks, while the troop equipment was stored inside. The vehicle's armament comprised a single MG.34 placed in a single pintle mount on top of the armored cover over the driver, to be manned by a standing soldier. Access of the vehicle was performed from the rear two-piece door. The name "Radschlepper" implies it was used as a tractor like the original vehicle, but no photo is showing any artilley piece towed, perhaps because the weight of the armor already took a toll on the vehicle's towing capabilities. The few photos shows no towing apparatus either no anything towed. It was apparently used therefore as an armored, frontline troop transport. The vehicle existed at least in two versions, the 4-räd and 6-räd. The first still retained the W15T for the sake of clarification. It seemed indeed a single 4-wheeled V15T was converted, which probably did not gave satisfaction.

The vehicles converted were sent to Schnelle Brigade West, so let's have a look at it. By an order of the OKH to the Ob. West on October 10, 1942, the formation of the armored artillery brigade (Sfl.) Was ordered in France, to defend the French western sector and the coast. The reinforced Rapid Brigade West was under orders from No.956/43 g.Kdos. of February 16, 1943, set up by OB West from the armored artillery brigade. As early as May 6, 1943, it was expanded to a full motorized Infantry Division, with 2 Panzergrenadier regiments, 1 artillery regiment with 3 divisions, 1 reinforced tank destroyer division, 1 engineer battalion, 1 intelligence division and corresponding supply troops. However, before this order was implemented it was revoked on June 27, 1943. Instead the brigade was transformed into the 21st Panzer Division (recreation of the unit lost in Tunisia). It was remakable as having great disparity in the types of armored vehicles used. Most used French vehicles armored in local workshops, like Baukommando Becker near Paris. The unit was decimated in Normandy and finished off in the Falaise pocket. The remnants merged with the 16th Luftwaffe Field Division. Among these forces at least one Laffly W15T Gepanzerte was still active in Paris, as it was photographed on place de la Concorde by August 1944, when the city made its insurrection.

One such vehicle in Paris, place de la concorde, August 1944