The German Army Grille light self-propelled artillery gun's official designation was 15 cm Schweres Infanteriegeschütz 33/1 auf Selbstfahrlafette 38(t) (Sf) Ausf. M (Sd.Kfz. 138/1). It was based on the Czech built Panzer 38(t) tank chassis. The German word Grille means 'Cricket': a small insect that makes a very large noise. There were two main types of self-propelled guns in the German Army during WW2. One was fitted with an anti-tank gun and the other with an artillery howitzer, like the Grille. The letters ‘Sf’ stand for ‘Selbstfahrlafette’ – self-propelled carriage. The German phrase 'Schweres Infanteriegeschütz' translates to 'heavy infantry gun'. The words Ausf M refer to the model of Panzer 38(t) tank chassis that was used.

It was armed with the standard Schweres Infanteriegeschütz 33 (Sf) 15 cm howitzer. The first chassis to mount this gun was the feeble Panzer I Ausf.B, followed by a stretched-up Panzer II variant, both called "Bison". The initial specification asked for 200 vehicles based on the new, much improved Panzer 38(t) Ausf.M chassis developed by BMM (Böhmisch-Mährische Maschinenfabrik),the former ČKD Praga, but development took time.

Before it was ready, a first series was based on the already existing Ausf.H chassis, which shared the same Waffenamt designation, Sd.Kfz.138/1, with later vehicles based on the Ausf.M. Official long designation was 15 cm Schweres Infanteriegeschütz 33 (Sf) auf Panzerkampfwagen 38(t) Ausf. H/K. The Sd.Kfz.138 was one of several variants of the same chassis derived from the Panzer 38(t), among which was the Jagdpanzer 38(t) (better known nowadays as the Hetzer), all built by the same manufacturer under German control. This light chassis was the most prolific and successful the German Army ever had. It was also used for the Aufklärungspanzer 38(t), the Flakpanzer 38(t), Marder III or Schulfahrwanne (driving school), among others. *Another series of SPGs named "Grille" began in 1942, based on various chassis, ranging from the Panzer IV to the Tiger II, armed with 88, 100, 105 or 128 mm guns, 150 or 170 mm howitzers and 210, 305 or 420 mm mortars.

The early model was based on the regular Panzer 38(t) Ausf.H and therefore was characterized by the engine at the rear (unchanged). The superstructure, built around the massive sIG 33 howitzer, was open-top, as usual for most German SPGs. It had a three faceted shape with a partly enclosed rear. The superstructure gave a low profile to the vehicle, but left the crew vulnerable. Supestructure armor was in the region of 10-25 mm (front) (0.39-0.98 in), while the hull was 50 mm (1.97 in) thick at the front. Most of the ammunition was stored on the superstructure walls, while other rounds were stored in the hull. BMM produced 91 Ausf.H from February until April 1943. 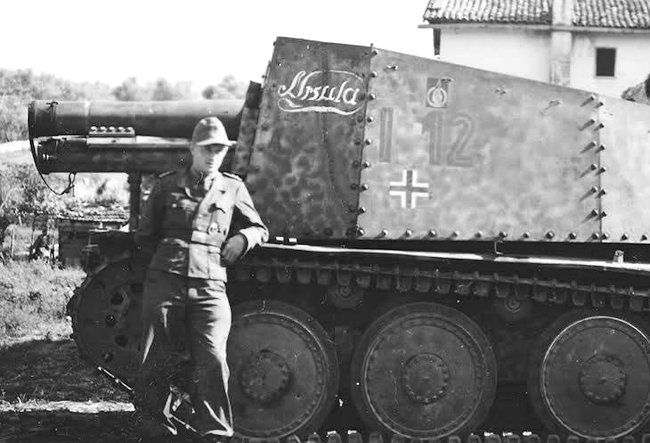 Built on brand new Ausf.M chassis, on which the engine was pushed to the front. This allowed the designer to completely rearrange the vehicle, moving the superstructure, gun and ammo to the rear. This was preferable when thinking in terms of stability, and the height was not influenced in any way. The fighting compartment was still open topped, with 15 mm (0.59 in) of armor on the front and 10 mm (0.39 in) on the sides. About 282 Grille Ausf.Ks were produced by BMM from April to June 1943. After a considerable interruption, production was resumed between October 1943 and September 1944. The last ten vehicles were finished as Flakpanzer 38(t)s instead.

102 ammunition carriers were also built by BMM between January and May 1944. They were based on the Panzer 38(t) Ausf.M chassis. It was basically a regular Grille Ausf.K, but without the gun, ammunition racks being stacked in place of the howitzer. However, a quick conversion kit was conceived, which allowed for the quick conversion in the field of the ammunition carrier into an SPG should a howitzer become available.

The Grille in action

The Ausf.H were issued to heavy infantry gun units of Panzergrenadier and Panzer Divisions, six vehicles in each platoon. They were sent to the Russian front, but some found their way in Italy and Normandy. Ausf.Ks were issued organically to similar units and saw action in all fronts except for North Africa. A single surviving example (Ausf.K) can be seen at the US Army Ordnance Museum in Aberdeen, USA.