Development of the AS.42

By 1942, the famed British and Commonwealth LRDG roamed well beyond the Axis lines, creating havoc in the communication lines, aerodromes, depots and supply bases. At the same time, their far-reaching reconnaissance patrols were precious for Allied intelligence. The Italian army tried to emulate such unit, and in order to have a match for the vehicles used by the British, they used a project that SPA-Viberti proposed some time before, based on the AB 41. This was a scout car, at first unarmed, but quickly got to be heavily armed. The SPA-Viberti AS.42 was quickly developed in early 1942. The prototype was presented to the army on 9 July 1942, passed all tests, and was put into production as soon as August 1942.

Basically, the chassis of the AB 41 was left untouched, but the hull was completely remodeled, taking a shape reminiscent of the German Kübelwagen. The front was sloped and housed a massive spare roadwheel, the mudguards were remodeled, and the central open compartment was strengthened by framing. The chassis was characterized by a step of 3.2 m, 1.75 m carriageway and ground clearance of 0.35 m, with the ability to ford 0.7 m. The traction was integral, but only the front wheels were steered and the second seat was removed. 20 jerrycans of 20 l each were carried, in two rows on each side, along with four water jerrycans on the front fenders, and others at the rear, supported by the sand ramps.

From September to November, the first batch of 140 vehicles was delivered to the Regio Esercito. Besides the driver's seat, the crew that served the on board weapons were seated on four folding seats on the sides. The "Sahariana" was completely dedicated to desert raiding parties, as it was first intended. Its low-profile allowed it to hide behind the dunes and wait for the arrival of the enemy unseen, and its great autonomy allowed it to chase enemy forces for long periods. Entering service in December 1942, the AS.42 participated in the final stages of the African campaign of Libya and the whole campaign of Tunisia, mainly assigned to aviation companies of the Auto-Saharan Company and the 103rd Battalion. Surviving vehicles were later used by the 2nd Battalion of the 10th Regiment in the defense of Sicily and southern Italy.

The same unit and the Motorized Assault Battalion employed the "Sahariana" and "Metropolitana" models in the defense of Rome on September 8, 1943. A group of 46 vehicles from the 10th were captured and reused by the Fallschirmjäger-Division Hermann Göring after the Italian Armistice. They soldiered throughout 1944 and 1945 as reconnaissance vehicles on the Eastern Front, in France, Belgium and the Netherlands. Some of the vehicles were recovered and used by the Free Italian Battalion "Barbarigo" X-MAS Flotilla.

The Fiat SPA AS.42 "Metropolitana" 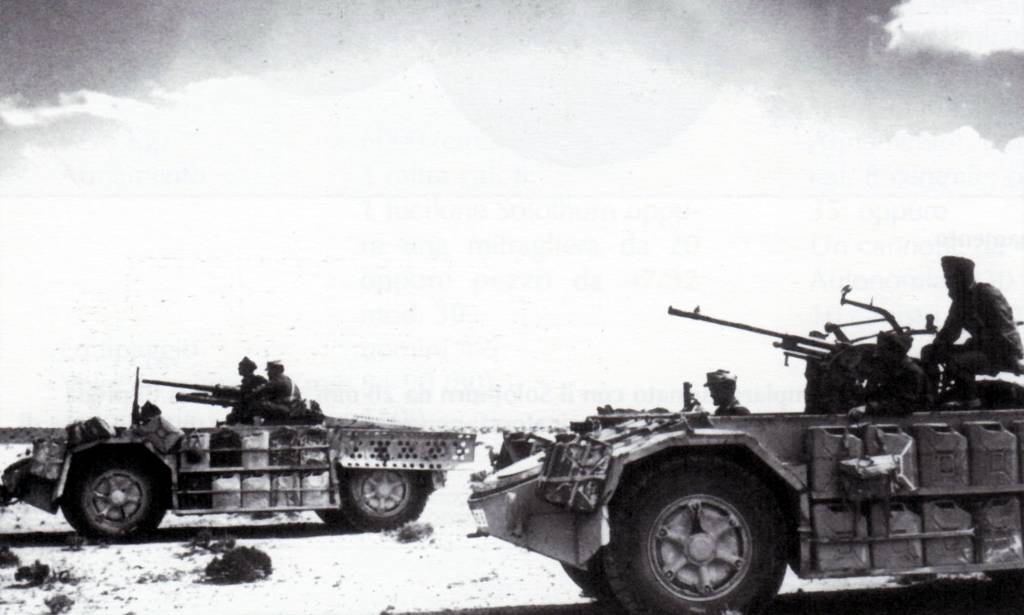 A second model, called Sahariana II or, more commonly Metropolitana, entered service in Italy in 1943. It differed from the first model by the absence of the two upper sides rows of gasoline jerrycans, replaced by two large caissons for ammunition, and the presence of a tarpaulin. In addition, this version was fitted with new Pirelli "claw" tires adapted to the mainland, unlike the previous sand tires. A dozen of these vehicles were supplied to the Italian Police during wartime, and were integrated into the ranks of the Department Celeri and Departments of Public Security, seeing service until the mid 1950s. The AS.42 was fast and dependable, but nevertheless complicated to build and maintain.

Camouflaged AS-42 Metropolitana, used by the Police, at the time of the Italian armistice in November 1943.