The StuG enjoyed great success on the Eastern Front, after it was converted as a tank hunter in 1942. This example quickly gave confidence to the Comando Supremo to devise yet another vehicle based on the same principle as the previous Semovente 75/18. It was, logically, based on the latest chassis produced by FIAT-Ansaldo, the M15/42 medium tank. But, this time, it was planned as a tank-hunter and equipped with a 75 mm (2.95 in) L34 Breda gun, an derivative of a field gun with a longer barrel. The new model was, therefore, named Semovente da 75/34 su Scafo M42. The prototype was ready in the fall of 1942, but it entered service on April, 23, 1943. Initially, an order of 200 was placed. Information is conflicting and, according to some sources, perhaps 36 were ready before Italy surrendered to the Allies.

This tank hunter was basically a repeat of the Semovente 75/18 M41 on the M42 chassis. The latter was longer and had a better engine. The SPA M15 gave 190 [email protected] rpm, and had a 4 forward, 1 reverse gearbox. The power/weight ration was 12.7 hp/t, giving a 40 km/h (25 mph) speed on road, and 15 km/h (9 mph) off-road. However, this extra power was squandered by the lack of a modern suspension. It kept the same two bogies arrangement, each with 4 roadwheels and suspended by leaf springs. The tracks had a ground pressure of 12.2 psi, with a ground clearance of 38 cm and turning radius of 4.5 m. As trials showed, it could climb a 40° slope. Fording capability was 1 m, trench crossing 2 m, and it could overcome a 80 cm vertical obstacle. 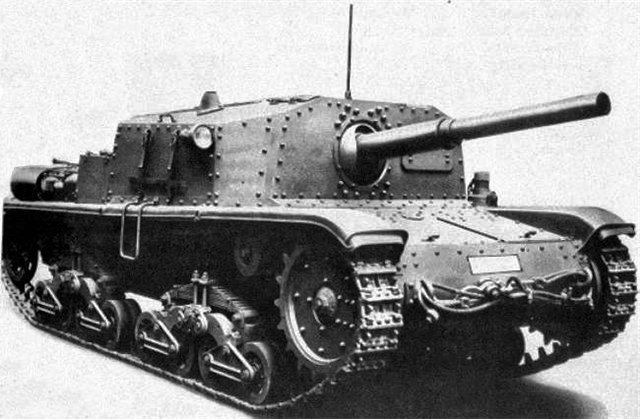 Because o delayed production, lack of manpower and training time, only a few were used by Italian troops in Italy, before the 8th September armistice. In November, about 36 tanks were confiscated by the Germans. They also ordered a second production run, which lasted until 1944, with 80 more SPGs being turned over. In German service these were called Sturmgeschütz M42 mit 75/34 851(i). These took part in the defense of the central/northern Italy and the Balkans.

Links about the Semovente Da 75/34

The Semovente 75/34 on Wikipedia

Semovente M43 da 75/46 tank hunter, used by German forces on the Gothic line, fall 1944. The gun was much longer than the previous 75/34, and imposed a heavily modified superstructure. The M43 chassis was also wider.