The successor of the Type 95 Ha-Go

The Type 98 was planned in 1937, and the design was ready in 1938. The prototype was completed by Hino Motors in 1939. However, production did not start before 1942. The decision to postpone assembly was linked to the good performances given by the Type 95 Ha-Go in China, against lighter/largely obsolete Chinese tanks. However, with the war evolving in the Pacific, it was soon realized that the Ha-Go was vulnerable to .50 cal (12.7 in) heavy machine gun rounds, and the design was improved with thicker and more sloped plates. The new tank was accepted in service in 1942 as the 九八式軽戦車 ケニ, for Kyuhachi-shiki keisensha Ke-Ni, sometimes called Type 98 Chi-Ni.

Compared to its predecessor, the Type 98 was shorter, much lower, with a sloped welded superstructure at the front. The driver sat in the middle, while the commander and gunner were housed in a wider, 2 man central turret (in contrast to the previous one-man asymmetric turret). The Ke-Ni's turret had a two-pieces large hatch, a Type 100 37 mm (1.46 in) main gun, which had better muzzle velocity (760 m/s) than the Ha-Go's Type 98, with a coaxial Type 97 machine gun (110 and 1400 rounds respectively). Despite a slightly thicker armor, it was 300 kg lighter. 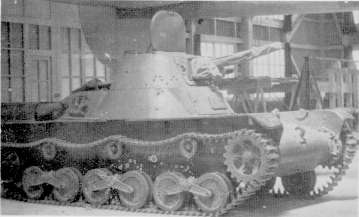 It was also placed sideways to ease maintenance. The wheeltrain was considerably overhauled for a smoother ride, although still using the characteristic horizontal bell crank system. The bell cranks themselves were connected to the first and last roadwheels and bogies, transferred to the central spring by intermediary coil springs connected to the chassis. It was composed of three bogies per side, each with a rubber-clad roadwheel, and three return rollers. The drive sprocket was at the front and idler at the rear. Ground clearance was 0.35 m, it was capable of climbing a 70 cm obstacle, 30° gradient, cross a 2.1 m trench and ford 75 cm deep rivers. There was no apparent provision for an external AA light machine gun.

Outside the standard Type 98, also known as the Type 98A Ke-Ni Ko, there was the experimental Type 98B Ke-Ni Otsu developed by Hino Motors from the Prototype 98B. It featured four large roadwheels and no return rollers, in a Christie-like fashion. This version was never accepted into production. The Type 98 Ta-Se 20 mm (0.79 in) anti-aircraft prototype was developed in November 1941, with a 20 mm (0.79 in) AA gun derived from the Type 98 autocannon, and housed in a large open turret. "Ta" stands for "Taikū" ("anti-air") and "Se" for sensha ("tank"). After deceiving trials, the project was cancelled in 1943. 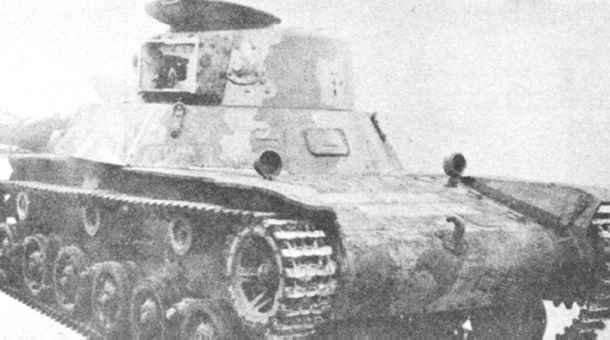 This model was the main derivative of the Type 98. It was all-improved, with a better Type 1 37 mm (1.46 in) main gun, capable of a muzzle velocity of 810 m/s in a modified, roomier turret. The "Ke" stands for "light" and "To", the seventh. Only 28 were built in all, during the fall of 1944 and 1945. Like most Japanese tanks this late in the war, it never left the Home Islands and never fought.

The 104 (132 according to another source) Type 98 Ke-Nis were produced by Hino Motors (Hino Jidosha Kogyo) and Mitsubishi Heavy Industries. These small numbers can be explained by the priority given to the building of warships. According to General Hara, this small production was also explained by the reluctance of the Army High Command to increase the number of different types in service, and because crews were already well trained and quite happy with the existing Ha-Go type. Being released so late in the war, the Ke-Ni operational records are unknown and most likely they were given to young recruits and kept in the Home Islands.