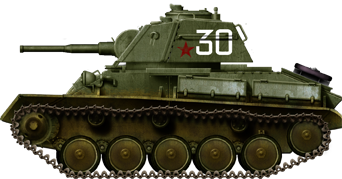 The T-80 appeared in late 1943, and it was the result of the Astrov team trying to fix the problems with T-70. They knew that they needed to improve combat performance, because the T-70 still showed signs of weakness, such as poor armor, the constraints of a two man crew, and other lesser issues. When the team tried to fix the problems with the T-60 by making the T-70, it was generally successful, but the T-80 was a different story. The design seemed fine, but it simply came about too late - at a time when light tanks were being phased out. Ultimately, the T-80 was simply not good enough in 1943 to warrant its production.

A T-80 tank, notice all the hand rails for tank riders.

The T-80 was actually developed in autumn, 1942, still at KB Gorky automobile plant, and still led by Astrov. The main aim was to create a substantially more versatile tank; one which would be able to fill up multiple roles, similar to the T-34. The first major idea was to install a much larger turret with electrical traverse to accommodate a commander and a gunner, thus giving a three man crew, which would improve combat performance, as the T-70 suffered by having only space for two crew members, which meant that the commander was also the gunner and loader.

The new, larger turret was welded, but the welding was protected by small squares of armor plating. As well as this, a new periscope was added, giving the commander an all important all-around view. Lieutenant General Konev, the commander of the Kalinin Front, insisted on the vehicle having anti-aircraft abilities, as the Red Army was consistently vulnerable to Luftwaffe raids.

This led to the gun mount being changed drastically, allowing a much greater gun arc - a whopping -8 to +65 degrees, meaning that it could fire at aircraft, as well as fire into buildings at very close range during a city fight. It even featured two sets of gun sights, one of which was specifically designed to fire at aircraft, and the other for direct fire. Maximum range for the gun with direct fire was 3600m, but the highest recorded was 6000m. It could fire up to twelve rounds per minute, and had an ammo capacity of 94-100 rounds, as well as 1008 rounds for the DT machine gun.

The hull was identical to the T-70 except for a stronger suspension and wider tracks. Handles were also added to the hull of the vehicle, for tank riders. This tactic was common and popular with the T-70, and was taken into account when designing the T-80. The crew was given a single PPSh-41 sub-machine gun, and twelve F-1 grenades. A prototype was sent for trials in December, 1942, and it passed. Production started at Zavod 40 "Metrovagonmash" or simply, MMZ, in Mytishchi, Moscow Oblast, the following year. However, in October 1943, all light tank production was cancelled after at least 75 T-80s were built. 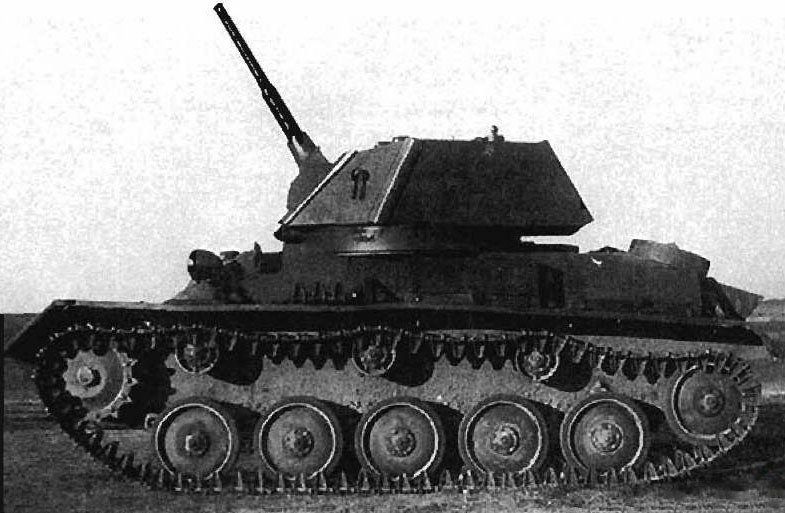 A standard model T-80 with its gun at maximum elevation.

The T-80 actually sounded like a very good design for a tank, but it came far too late in the war, and the design was ultimately outdated, and could not resist the more common AT fire from late model Panzer IIIs and IVs. One could speculate that had this design been realized in 1940, then this would be perhaps one of the greatest tanks in production.

Even with the promising new turret, it did not change problems of survivability, mid-war, that both the T-60 and T-70 had suffered from. The armor was still far too weak to survive attacks from mid-war German tanks, and the maneuverability was even worse than the T-70 as a result of increased weight, and the fact that the same under-powered engine from the T-70 was kept.

Many of the functions of the light scout and infantry-support tanks were being taken over by tanks provided through Lend-Lease such as the Valentine, by armored cars (both of which were preferred by officers and crew alike) or sometimes even by the now mass-produced T-34. T-80 production was also riddled with technical errors and production was therefore rather difficult for such an inferior tank. Worse still for the T-80, the SU-76 was seen as a better way to increase the effectiveness of light tank production, even despite its crews hating it, as it was nearly the same hull, but with much greater firepower.

There were plans to mount a 45mm BT-42 gun to the tank, which was a notably longer gun. A single prototype was produced jointly between Plant 40 and Plant 172 at the start of 1943. However, this was not accepted for service. Shortly after, the BT-43 gun was developed on the basis of the BT-42. This was designed to increase the gun arc further to -4 to +78 degrees. When tested, it could fire 9-10 rounds per minute, and the tank could carry 94 rounds. All other characteristics of the vehicle remained the same. This variant was accepted for service, but in light of the termination of T-80 production, all work was dropped. 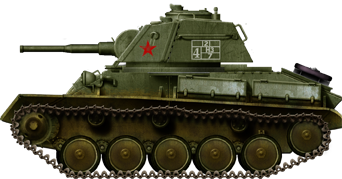 A side view of the T-80 at a testing ground. 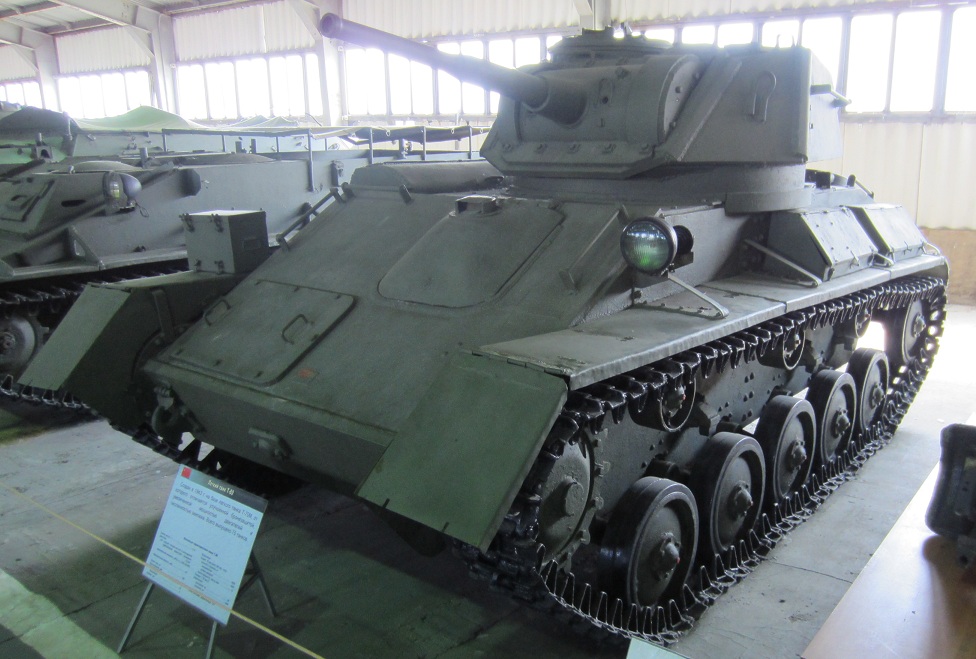 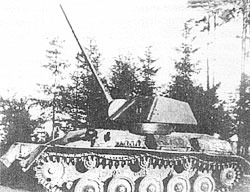 The prototype T-80 with the BT-43 gun. The gun is at its maximum angle of elevation.