The Swedish company AB Landsverk privately began the development of the 4x4 Lynx heavy armored car (Pansarbil m/39) in 1937, after the deceiving experience with the three-axle armored cars L-180\L-181\L-182. Off-road capabilities, speed and maneuverability had to be greatly enhanced compared to these previous vehicles, and a double drive (front and rear) was added. This system was already obsolete and required a complicated gearbox and additional stress on the transmission. However, being able to quickly change direction was still viewed as an advantage on narrow roads and streets. Although the model was presented to the Swedish Army and did not attract much interest, AB Landsverk tested it against the British Alvis-Straussler AC3 in Denmark.

The Danes issued an order for 18 vehicles. The first prototype was ready for trials in January 1938, and the first three export vehicles were shipped to Denmark in April 1938. When Germany invaded Denmark, Copenhagen was expecting another shipment of 15 vehicles. The Swedish authorities canceled the operation and requisitioned the machines, which entered service in the Swedish Army as the Pansarbil m/39. In addition, the army ordered 30 more vehicles, in two batches. The second batch, designated m/40, was manufactured by Volvo, since Landsverk did not have the required capacity to fulfill the order.

The Pansarbil m/39 was characterized by a low body, although the ground clearance was sufficient for the Swedish roads and terrain. The welded RHA armor was relatively thin, with a maximum of 18 mm (0.7 in) on the front, but well distributed and sloped. The crew of six members included the front driver and machine-gunner, the rear driver and rear machine-gunner. The vehicle was symmetrical and drive either way with the same performances. The 140 hp Scania-Vabis petrol engine was in the middle section, on the hull's left side, and assisted by a 4 speed gearbox, forward and backward. The standard turret was derived from the L-60 (m/38), and had been modified for the installation of radio equipment for the Danish army. It was located in the middle of the hull, operated by the commander and gunner. Danish m/39s were armed with a QF 20 mm (0.79 in) Madsen auto cannon. In addition, two Madsen 8 mm (0.31 in) light machine guns were placed at front and rear of the vehicle. The third Madsen LMG was coaxial to the main gun.

The Swedish m/40 Pansarbils were externally identical, but received Bofors 20 mm (0.79 in) guns as their main armament. This auto cannon was the same used by the L-60 light tank series and Hungarian Toldi tanks, and was enough to destroy most armored cars and light tanks of the day. The other major difference was their Volvo petrol engines, producing 145 horsepower, but very similar in appearance and weight to the Scania engine.

The first three out of eighteen Danish m/39s were delivered in April 1938, designated PV9, PV10 and PV11. They were armed locally, just when the war broke out. Two armored car squadrons were formed with these vehicles (BAE), attached to two cavalry regiments. The Garderhusarregimentet was based in Naestved, while the Jydske Dragonregiment was stationed in Randers. The main armored car in service with these units was the L-180, but it lacked the performances of the Lynx. A further batch of 15 vehicles (order signed in December 1938) were still awaiting delivery to Copenhagen due to lack of funds (125,000 DKK per unit). When the war broke out the Swedish government decided to confiscate them. On the morning of April 9, 1940 the German army invaded Denmark and occupied the whole country. The Danish "Lynx" were used by the German armored police units during the years of occupation, to maintain order.

In Sweden, the Pansarbil m/40s were completed and in service between 1941-43, distributed among reconnaissance units and participating in regular exercises. Thirteen vehicles (serial numbers 227-235 and 303-308) were sold in 1956 to the Dominican Republic. They operated for a long time, and possibly took an active part in the suppression of the revolution of 1965 and the ensuing civil war.

Links about the Pansarbil m/39

The Pansarbil m/39 on Wikipedia
Additional photos from the Pansarmuseet 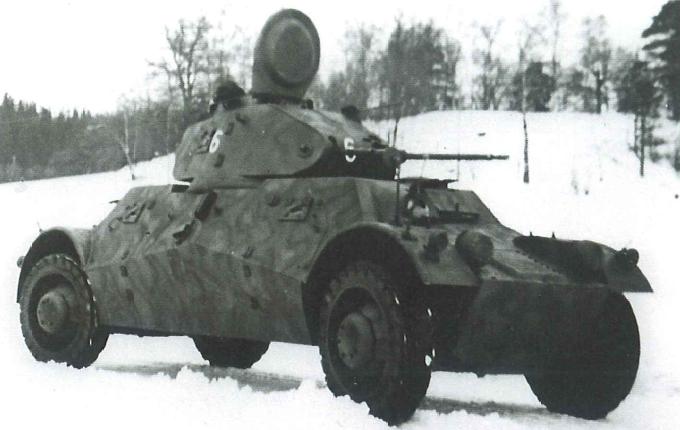