This vehicle seems reminiscent of WW2 designs, but was conceived as a cheap and reliable last ditch Anti-Aircraft (AA) self-propelled gun. This Czechoslovak vehicle was developed in the late 1950s from the proper needs of the Czechoslovakian armoured divisions, not supplied at that time with a Soviet SPAAG. The country wanted a domestic production and had the capacity for it. The base chosen was the trusted Praga V3S six-wheel drive truck chassis. It was armored and armed with a twin 30 mm AA autocannon mounted on the rear flatbed. Locally called the Praga PLDvK vz. 53/59 - "Ještěrka" (PLDvK Model 53/59 - "Lizard"), "PLDvK" standing for "Protiletadlový dvojkanón" or Anti-aircraft twin-cannon. It soon appeared also a valuable ground asset for close combat, with its high rate of fire and variety of ammunitions. Production was beyond 1000 vehicles and it was also largely exported, finding plenty of action during its active life from 1960. Production stopped in 1978, but the "Lizard" is still used or in the inventory of some countries, albeit long retired from Czech service.

Praga M59, the base vehicle, next on truck encyclopedia.

The Praga M59 draws from the V3S truck. This sturdy platform was also derived into an experimental armoured APC, which never past the prototype stage. The sole propers military versions were a rocket launcher vehicle and the current SPAAG.

The V3S truck on which was based the Praga M53/59 was a project developed immediately postwar by Praga, on the basis of two references, the American Studebaker US6 and Russian ZiL. The particular design of axle gearboxes, positioned high above the wheels axis have the vehicle a high ground clearance ideal for off-road runs. Maximum speed was however due to this limited to 60 km/h (37 mph). But wit its classic ladder type chassis and solid three axle with doubled trains at the rear, this new truck unveiled in 1950 and produced from 1953 in Praga proved durable, popular and extremely adaptable. It was also widely exported, quite a success of eastern Europe's industry. Many are still used today in many roles. It was discarded as a military truck in the 1980s.

The engine was an air-cooled diesel, six-cylinder "Tatra 912-1". The latter was a modified Tatra 111 block, with increased capacity to 7412 cm³. It had a moder, direct fuel injection, and overhead valves. For military used it was however noisy, but extrememly reliable in all weather conditions and temperatures. The payload rested on a set of eight roasswheels thanks to the two dual axles at the rear, and directional axles forward. Consumption was 30 liters for 100 km, in the norm for such vehicles at the time, and with a fuel tank capacity of 120 liters.

Development of the M53/59 SPAAG 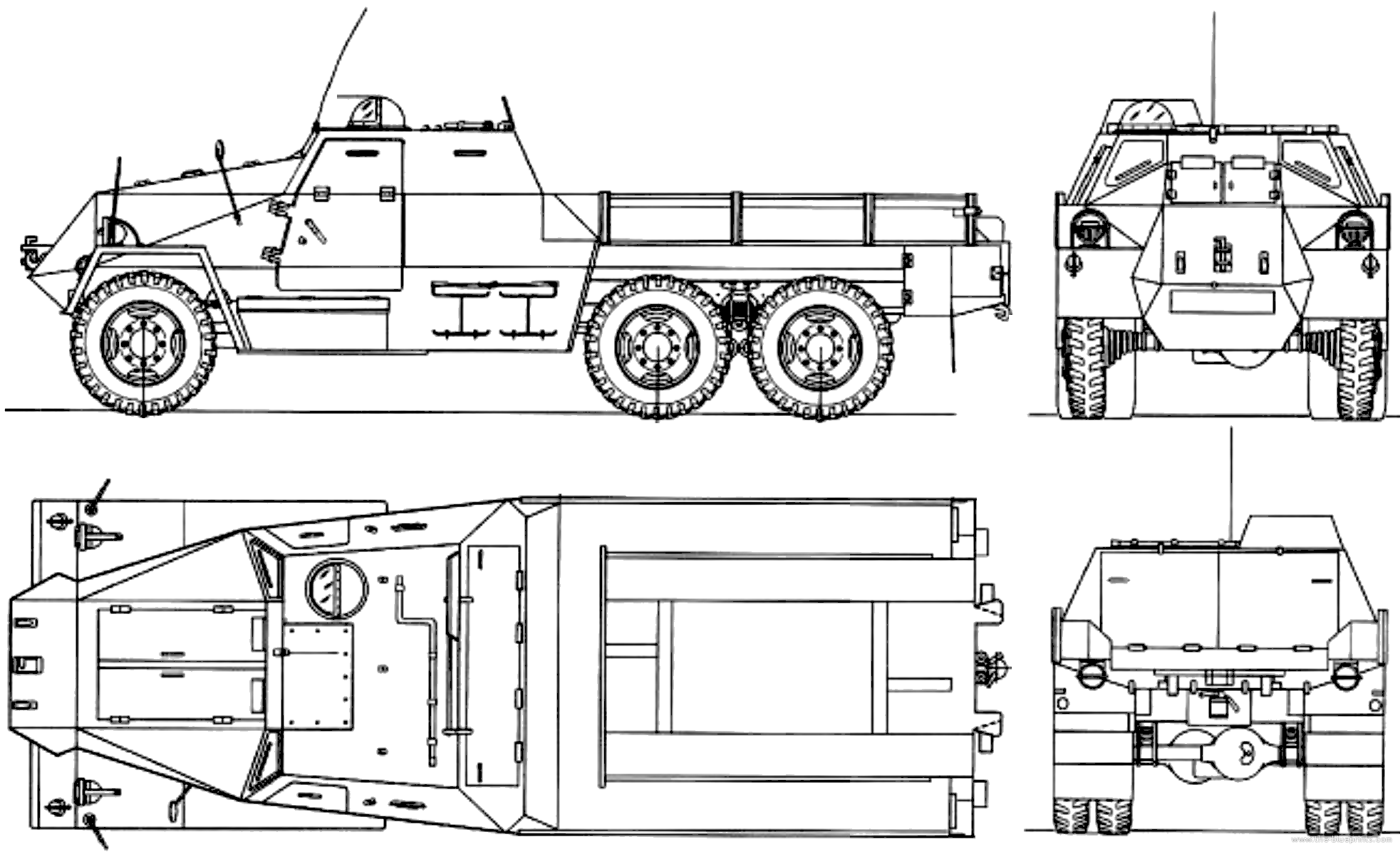 Blueprint of the vehicle

The idea of such SPAAG took off in the 1950s when the V3S proved very sturdy, reliable and adaptable, after a need from the Army for organic AA protection. It was the marriage between this platform and the newly developed weapons system at the time that was the 30 mm PLDvK AA gun developed at the time, based on several models of autocannons and using a classic gravity-feed ammunition magazine. Development started in 1957, and reunited a Producer, ZŘR Vsetín for the gun, AZKG Praga for the chassis dervied from V3S, and ZKJV Dubnica in Kubra as a final supplier and assembly. It was developed in secret under the codename "Jesterka" (Lizard) in Konstrukta Brno.

The final production prototype featured a partially armored 6x6 V3S Praga chassis with utilitarian flatbed at the rear. It was presented in 31.01.1959 and passed all tests with sucess. Production started the same year, probably at the end, and ran at the Engineering and metallurgical plant of Trenčín-Kubrá in 1959–1961 and Škoda Works until 1978 (with later developments taking shape). Production figures are ellusive. The excellent site armedconflicts.com states that the vehicle reached 761 vehicles, while others sources points out 900 vehicle, the difference between 1961 and mostly export production until 1978.

The armored cab comprised a sloped nose, complex shape over the engine and cabin, with V-shape side section, sloping down. The rear section was unarmoured, with folding sides, but the gun mount itself which was open top. With its Tatra T-912-2 6-cylinder inline air-cooled diesel engine rated for 110 bhp (82 kW) at 2,200 rpm, the Praga M53/59 could reach up to 37 mph on road (60 kph), and down to 40 or less off-road. With 10.7 hp/tonne (8 kW/tonne) it was recoignised as underpowered. Suspensions counted in ckassic leaf springs, with drum type brakes. Operational range was limited to 500 km or 310 miles.

Detail of the gun

Another view of the gun mount

Developed also in the 1950s as a mix of several types, most notably the Soviet and Italian 37 mm autocannons and Bofors 40 mm of WW2, Skoda worked on a new AA gun for Czech needs, the PLDvK 30mm (1.2 in) gun vz. 53/59, hence the name of the vehicle, which was a full weapon system in accordance Soviet ordnance at the time. The new gun was manufactured by ZŘR Vsetín for the barrels, and ZKJV Dubnica in Kubra for the mount and final assembly. The prototype was first tested on 31.10.1957 and production started in 1959 and ran until 1962, but possibly 1980 according to some sources.

The main capacity was 900 rounds of ammunition, in eight separate boxes of 50 rounds each, fed by gravity. The crew of three included a commander and two operators, a pointer using an optical system with pedals which implied daylight use in good weather conditions. The second member was the loader, which took from the main ammo bin the boxes and fed them in succession after 50-rounds bursts. Extra boxes were stored in the rear of the armored cab, accessed through a light flexible curtain. The gun had an interesting perk, as it could be dismounted and used independently of the vehicle, using two sliding ramps carried with the Praga M53/59. 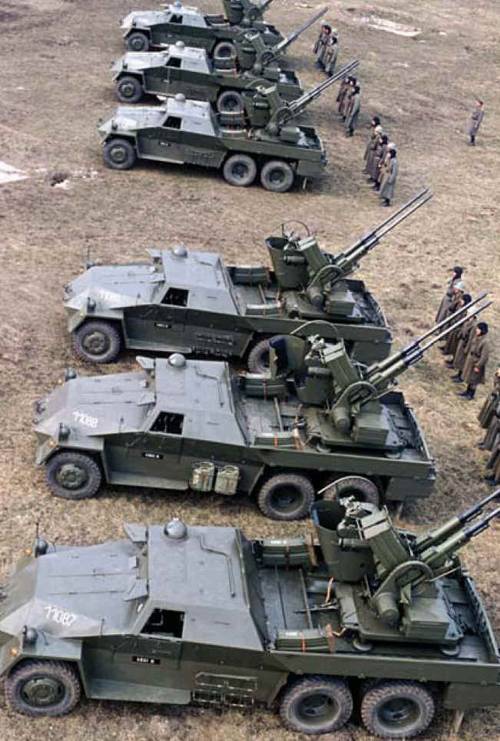 A platoon of 6 "lizards" with the Czechoslovakian army in exercizes in the 1970s, also showing the flatbed and ammo storage.

the "Jesterka" (Lizard) proved extremely popular, being a low target, difficult to spot, and equipped with a fast-firing powerful AA gun without serious deficiencies but the initial gunsight model 47, or 61/30, never replaced by new, modern electronic equivalent or radar to allow night firing or in bad weather. There was no IR system also. And drivers complains about the vehicle's being underpower. As the Praga V3S was not fitted with better engines, the "Lizard" stayed all its carrer with the same power unit.

A preserved vehicle alongside a Soviet ZIL Truck, showing how low it was

Interestingly enough, Czechoslovakia imported a single Soviet ZSU-57-2 for evaluation, and considered it not inferior, not superior to the already produced M53/59 so it was refused. While obsolete in AA role, the vehicle was still used effectively for ground support, very efficient against softskin targets and saw action in Congo/Zaire, by Egypt and Syria against Israel in 1967-73, Libya in the Chadian–Libyan conflict of 1978-1987 and Libyan civil war of 2011-2020, Iraq in 1980-1988 and the remainder were in action during the Gulf War 1990-1991 and seubequent operations from 2003 onwards; They were prominent duting the Yugoslav Wars of 1991-2001 used by all camps. Among the last uses, in the Democratic Republic of the Congo, March 23 Movement and M23 rebellion in 2012-2013. The last vehicles used by Czechoslovakia were passed on to the successor states, the Slovakian army notably, the last retired in 2003. It was replaced in the 1980s by the new 8x8 STROP II.

It was exported to the following: Democratic Republic of the Congo and Zaire (unknown), Cuba and Syria(same). Egypt (date unknown, more likely before the 1967 war with Israel), Iraq, notably with the artillery battalion, 9th armoured division, and Libya, with 110 ordered in 1970, delivered between 1970-1973, seeing heavy action during the 2000s civil war, Yugoslavia ordered 220 in 1965, delivered until 1968 and in 1991, up to 789. Yhey were Passed on to the successor states, Serbia having at least 48 in service during the war. Croatia used also these (unknown numbers), with two later given to a local army museum. Bosnia and Herzegovina and Slovenia also used these. Egypt, Libya, Serbia, Slovakia stille have these in the inventory. 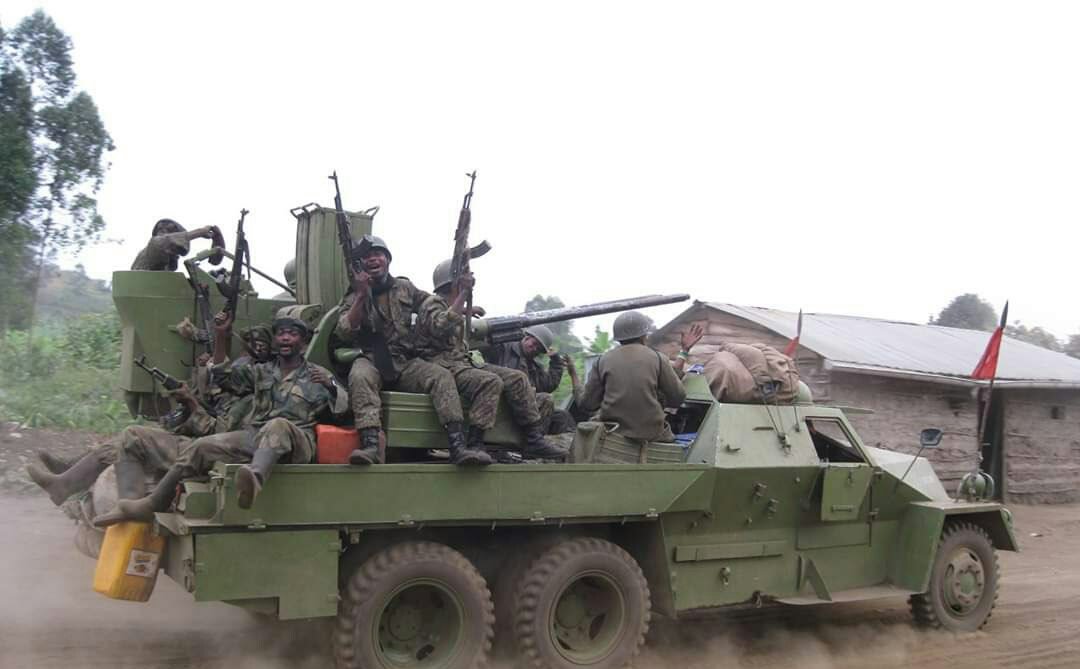 A vehicle exposed in Czechoslovakia today

The M53/59 Exposed in Brno, where it was first developed

Rear view of the flatbed, showing the gunner's open armored cab on the mount's left side.