While the Wehrmacht sported almost a dozen of different tank hunter models by 1943-44, the Allies lagged behind. The US developed, relatively soon in the war, a tank hunter doctrine, which spawned the M10 Wolverine. It was also included in 1944 in the British arsenal as the Achilles, some of which were rearmed with the Ordance QF 17 Pounder (3 in/76 mm) gun.
There already were new tank designs on the drawing board by 1942, like the Cavalier, Centaur and Cromwell series. However, these were at first armed a 6 pdr (2.24 in/57 mm) gun, and later with a 75 mm (2.95 in) gun. Encounters with the Tiger in Tunisia and Panthers in Italy convinced the General Staff of the need to motorize the 17 Pdr "long" gun in the search for more AT firepower. Also, the General Staff knew that this had to be done urgently.
A Churchill-derived "3-inch Gun Carrier" was tested but deemed too heavy, and it's gun inadequate. The length of the gun imposed a specially tailored vehicle, which turned into an unusually designed self-propelled anti-tank gun, designed by Vickers-Armstrong. 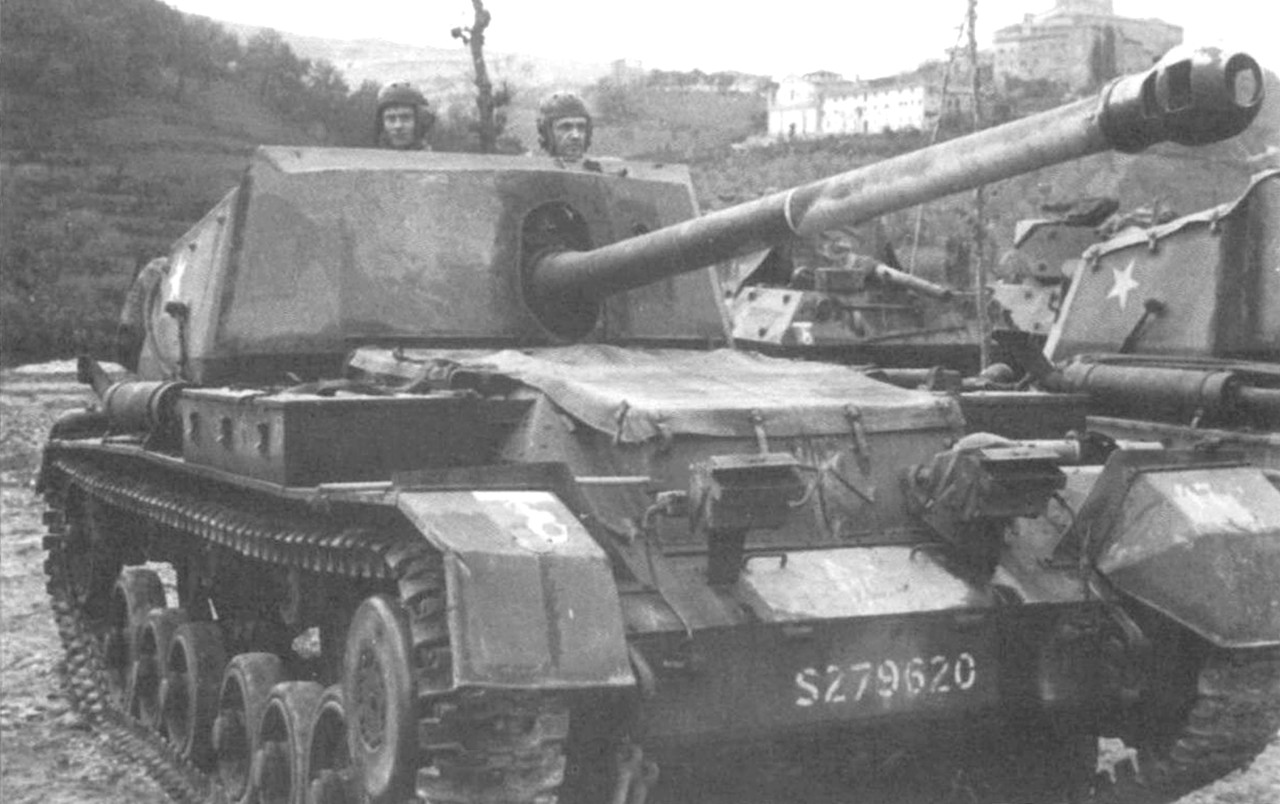 Before the archer, there was another attempt to turn the Valentine chassis into a self-propelled anti-tank gun. This consisted of mounting a the quick firing QF 6 Pounder gun behind the drivers position on its original carriage. Racks of ammunition were placed either side of the gun. Work on this Vehicle was discontinued when suitable modifications were made allowing the 6-Pdr to be mounted straight into the turret of a Valentine.

Design of the Archer

Rather than develop a new vehicle from scratch, one of the cheapest, lowest and more reliable chassis was chosen, that of the Valentine infantry tank. 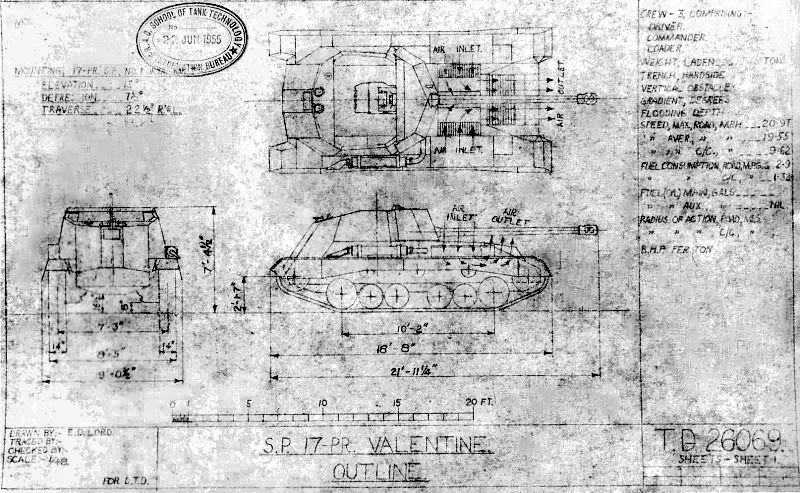 To avoid the gun colliding with every obstacle encountered, the Vickers engineers chose to place the gun in a rear-facing configuration, this way, the only possible tactical use of the vehicles was for defensive or ambush purposes. The driver and commander were seated in the front part of the casemate, which had a hinged armored flap and vision slit.
The casemate was open-top, multi-faceted, sloped at the front, sides, and rear. The rear part was open, in order to allow the gun shield some traverse (11°) and elevation (-7.5 to +15°). The 39 rounds carried were stored in the casemate (ready rounds) and inside the hull. The driver remained in his position while the gun was in action, despite the fast that recoil of the gun through the breach block dangerously close to his head. This was in order to be able to move quickly after the completion of firing.
An un-fore-seen side effect to the vehicle's orientation was the effect of heat from the engine interfearing with the gunners primary sight. It would also warm the center of the barrel, greatly decreasing the accuracy of the cannon.

The prototype was ready in April 1943, and firing trials began immediately. However, issues needed to be fixed before production started. An order for 800 vehicles was placed in mid-1943. The set-up lasted for quite a long time, and training and other post-production issues prevented the vehicle from entering service before October 1944. By that time, the Achilles, Firefly, Challenger and the up-gunned versions of the Cromwell had also entered service, some for quite a long time. The order was then curtailed and production stopped after the 655th vehicle. No variants are known.

The Archer in action 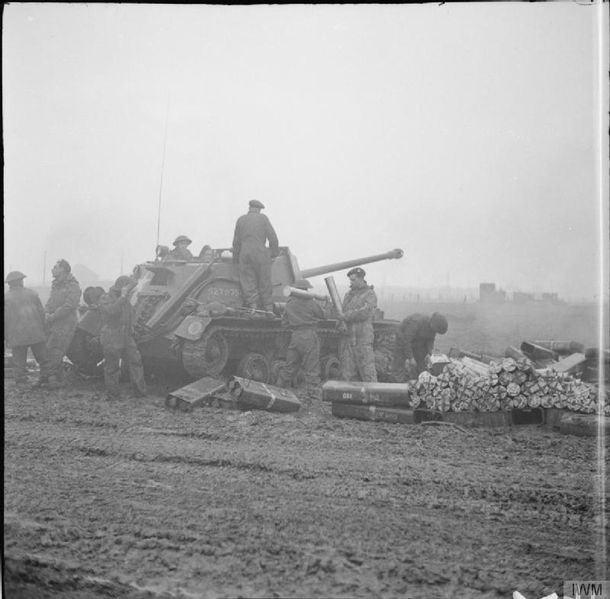 This rearward firing capability was seen as an advantage, since the vehicle did not need to turn around to retreat, and the low profile made it perfect for ambushes. When attacking, the Archer would back into a position, fire at it's target, then retreat at full speed The lengthy development of the vehicle somewhat hindered the roll the SPG was meant for. By the time it began being deployed, other designs were ready and waiting. Shortly after its introduction, this unique formula seemed far less seductive. It was used in Italy and North West Europe in the fall of 1944. Since this was an SPG, the Royal Artillery operated these units, in close coordination with Royal Armoured Corps units, along with Achilles. The Allies went on the offensive constantly at that stage, and the only role the Archer could perform by then was to secure the flanks against any counter-attacks, and provide fire support. The Archer did see service after the war, however. A remainder were stationed with the British Army of the Rhine (BAOR). Others were sold to the Egyptian army and saw action in the Suez Canal crisis in 1956. One of these vehicles was captured by the Israeli Army on the east bank of the Nile. 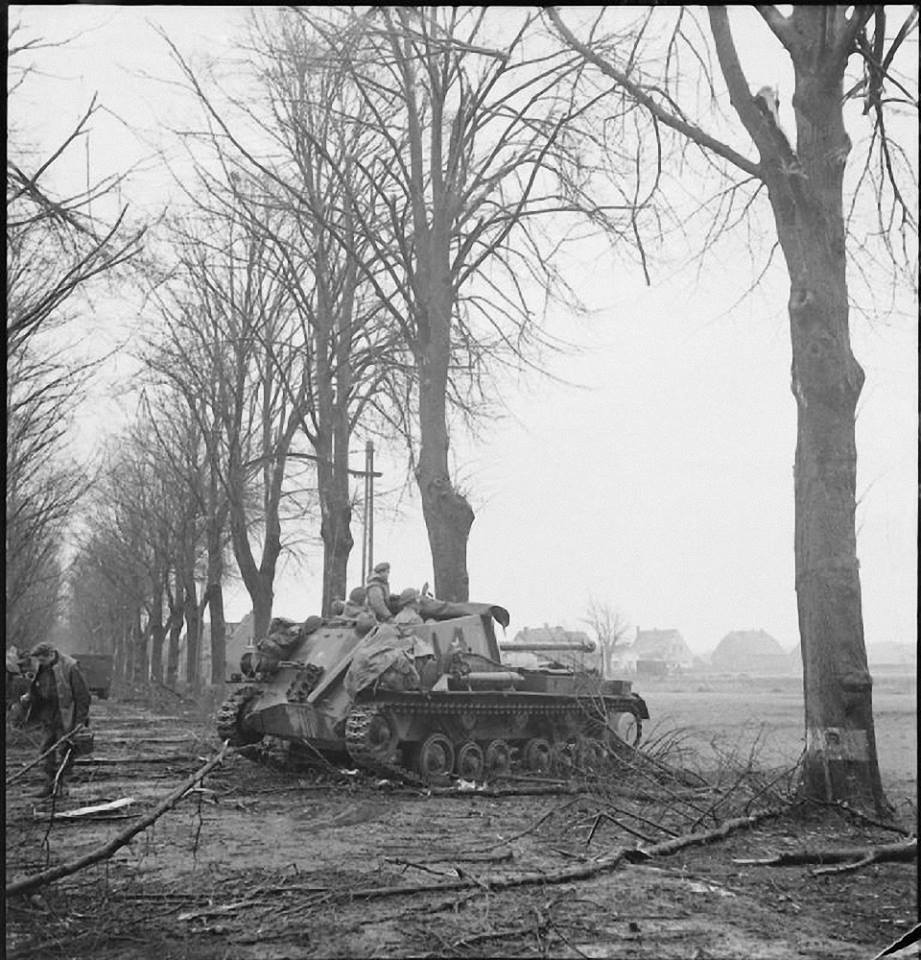 In an effort to hide its potent gun, crews used the 50% camo pattern on the gun. The front part being a disruptive white pattern. It was used to try and fool the Germans to believe that the vehicle was only armed with a standard 75 mm gun, not the long and lethal 17 Pounder. Tanks and SPGs with the 17 Pounder gun would be the first vehicles targeted because they were the biggest threat. The same camo was used most famously on the Sherman Firefly.

Archer in the Netherlands, winter 1944.

One Archer survives in the Tank Museum, Bovington, another can be found at Overloon in the Netherlands. The vehicle captured by the Israeli Army is now displayed at the Yad-la-Shiron Museum. The Australian Armor Museum has just restored an Archer to static display condition. They have painted it the livery of Polish forces. 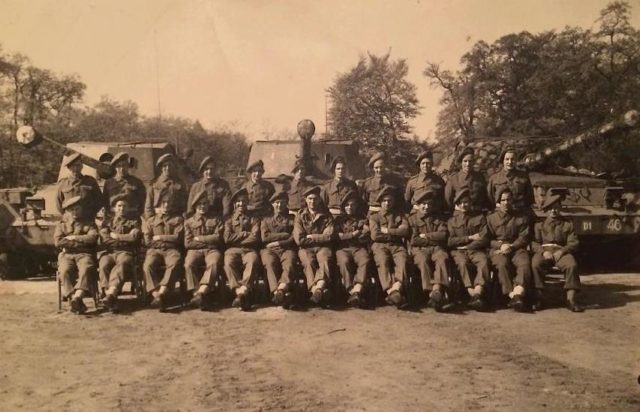 A picture of the 20th Anti-Tank regiment in front of 3 Archer vehicles, circa 1943-44. Operating in North-West Europe, the 20th were one of the few units which used the Archer - Credits: Mark Nash personal collection. 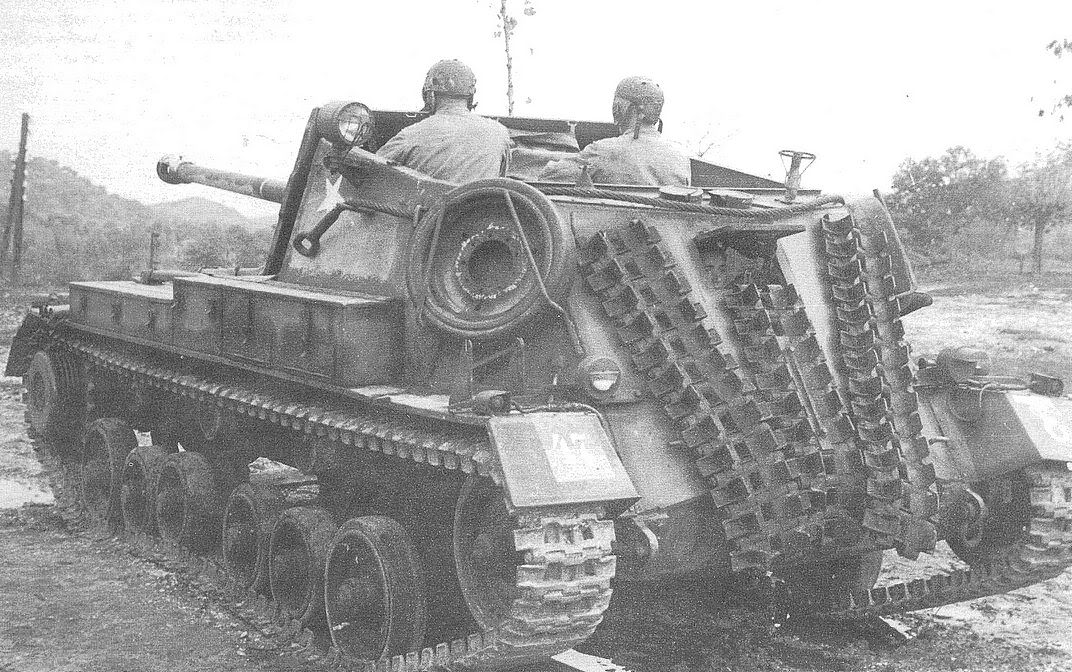 An Archer in operation, not the spare tracts, and wheels. The one on the left does not seem to match the vehicle. The Drivers hatch is open, and you can just see the crew man's face. Photo: - Imperial War Museum 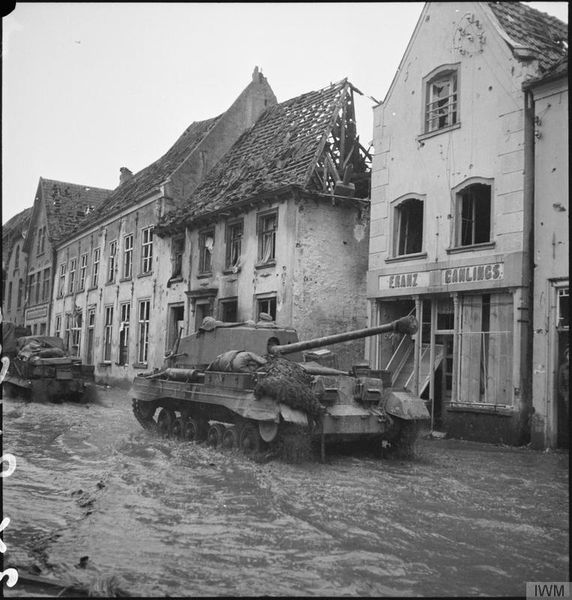 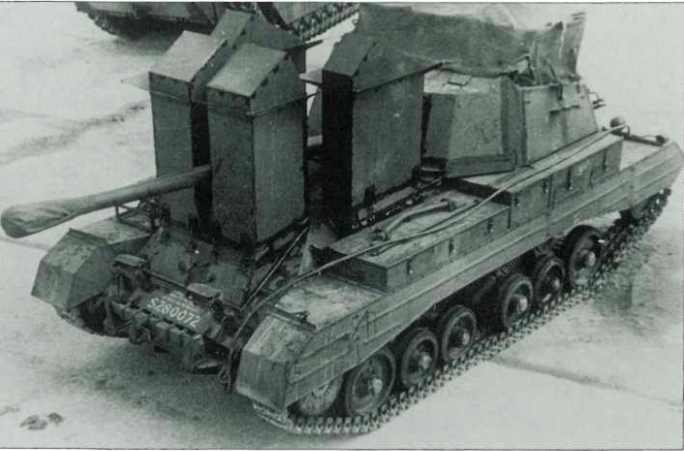 An Archer with experimental wading equipment.