If the Bravia Chaimite looks furiously like the CGC (Cadillac Gage Commando) family of vehicles, it's not random: The initial prototype was related to the American XM701 program. The project development began in the late 1960s by Bravia - Luso, Brazilian Society of Vehicles and Equipment for the Portuguese Armed Forces (cf. Motor Classic 22). The Portuguese Armed Forces were then involved in Colonial Wars in Guinea-Bissau, Angola, and Mozambique and needed an armored vehicle adapted to the ongoing military operations. The first vehicles were built in Belém (Lisbon), but mass-production was later delegated to the new plant of Bravia in Samora Correia, Porto Alto region. 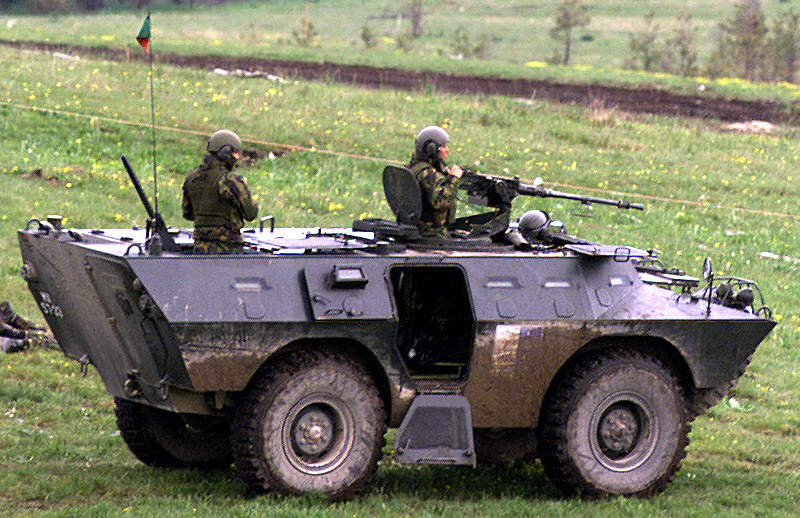 Although superficially this vehicle denoted a clear resemblance with the CGC M706, both designs also had significant differences, starting with the longer rear engine compartment, ending in a downwards slope, a "tail". The front was quite similar, only diverging for strapping and handles details, mirrors, headlamp models and arrangement, provision for the trim vane. On the hull, three windows rather than two were visible, one inside the side doors that folded up and down. Diesel engines which gave 155 hp (115 kW) at 3300 rpm were coupled with an automatic transmission for a maximum of 99 km/h (62 mph). The hull was made of welded steel with an armor capable of defeating 7.62 mm NATO ammunition.

Portuguese Marines: Used a small number of vehicles during the late 1960s-1970s, plus their own special version, Armada 90, operating 88.9 mm rocket launchers. Outside Portugal, the Peruvian Marines (32), Libyan presidential guard (16 vehicles), Lebanon (30 with the Internal Security Forces plus a few later passed to the Guardians of the Cedars in 1976), the Philippine Army (20 vehicles) and, according to some sources, Palestine (Palestinian Liberation Organization, 1 passed by Libya, later captured by IDF). The Chaimite was also tested and evaluated by Malaysia. 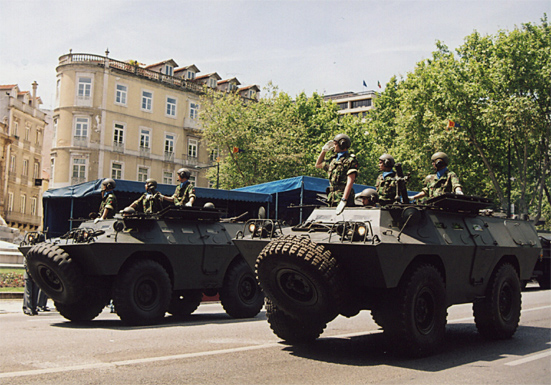 The first units were delivered in 1970, and in 1971 a first batch is sent to the Guinea-Bissau. With the outbreak of the Carnation Revolution (25 April 1974) vehicles from the Cavalry Training School took position on the Largo do Carmo Bvd. in Lisbon. On this occasion, one of these vehicles transported President Marcello Caetano from the Carmo Barracks to the plane that would take him into exile. The Portuguese army first used this vehicle for reconnaissance in the operations in Guinea. Following the revolution Chaimites equipped for a time the Regiment Command and the Artillery Regiment of Lisbon (one of the main revolutionary units), making it one of the PREC symbols. Later on, Chaimites started to equip specialized cavalry units for reconnaissance. In the 1990s, these vehicles also served to equip the Portuguese forces deployed to Bosnia and Kosovo. After nearly four decades of operational service, the last 84 APCs are now phased out and replaced by the Austrian Pandur II 8x8 APC.