The Morris Oxford Tracked Carrier ("Carrier, Tracked, CT20") was a British armoured personnel carrier (APC) and artillery tractor of the early cold war. It was designed to replace the famous Vickers "Universal Carrier", or "Bren carrier" used throughout WW2 on all fronts and produced in larger quantities than any other tracked vehicle during that era.

The Oxford was substantially larger at 6 tons, so twice the vehicle it replaced. It could carry more men and equipment and tow heavier ordnance as well. It saw action for the first time in the Korean War, as a tractor for the famous 17 pdr anti-tank gun, which knocked out many North Korean and Chinese T-34s but also as an APC. It existed in several sub-variants such as the CT21, CT35R, and CT23 to 26.

The Royal Armour expected six prototypes of Morris's take on the replacement for the Universal Carrier for trials in late 1944. But by December, supply problems with Cadillac for the delivery of intended engines considerably delayed. The RA was told to look at the CT20 as a long term project, its role taken by the Windsor Carrier, both filling peacetime Infantry Divisions until the mid 1950's. CT20 Trials were done between Jan-Feb. and July 1945. They highlight a number of up defects with the old Hortsmann suspension. Fixed further delayed production, followed by new trials. Eventually at the end of 1945, a production run of over 400 vehicles with the Cadillac engine was greenlighted. Further long term production was conditioned to the use of a 180 bhp British engine and with an overhead armored cover for the crew protection.

The War ended, making the axe fell all ongoing vehicle programs. The CT20 was however spared, still tested, notably in July 1946 whe it was shown at a high profile "Exhibition of German and other vehicles and equipment" in Chertsey. It was described by then as "the latest type of British Carrier, much more spacious than the Universal Carrier, employing "Cletrac" steering, four speed hydromatic gearbox mated to a 2-speed and reverse auxiliary box, plus a Cadillac V8 engine developing 110 bhp". Its suspensions were tested on a tailored "AFV martyr" track, pitted against a Coventry armoured car, and German 8x8 Vehicle.

The program subsequentely was plagued by ongoing, conflicting demands amidst post-war cost reductions coming from the political sphere, while the Army maintained and asked for more, aiming at the cold war. Between August and November 1946, a first batch of CT20 were heavy tested on the field with active units. It was to determine a possible further development, by then called the CT25. This version planned already in 1945 was given a Rolls-Royce engine, and improved suspension. Indeed, it had to carry the weight of the planned overhead cover. A mock up of fighting compartment was built on an Alecto chassis. The design was approved and next FVDD Chobham produced a CT25 chassis mock up. Vickers at the same time was developing its CT26 but the RA felt its was too bulky as an observation post vehicle as well as too small. In February 1946, the War Office decided that all future field and medium self propelled guns would be exclusively be mounted on the CT20 chassis and associated vehicles. In September 1946 the Army however eventually choose to favour the newe FV300. The CT20/25 series were bot only prototypes, they served on with Infantry in Korea, giving satisfaction.

The CT20 was basically a stretched-out Universal Carrier, but with many changes. It was twice as heavy, much taller, and the chassis was caraterised by the choice of two full Hortsmann types bogies instead of one and a single roadwheel on its suspension arm. The idler was a standard roadhweel, the drive sproket forward was also from the same Universal Carrier drivetrain. The track returned on two return rollers. The engine, located at the rear, was a 110 horsepower Cadillac 5 litre V8. It was mated with a 4 speed Hydramatic transmission. The reinforced Horstmann suspension was similar to the Windsor or T-16. Its four road wheels had steel centres rather than spoked. Performances are not known exactly.

The hull was defined by its compartment: Front open compartment where the driver (right) and commander (left) took place side by side, bac to back with seats facing rearwards, and two more seats, their back placed on the engine bulkhead behind, with a folding seat between. This made for a crew of seven. Not impressive for an APC, but the vehicle was an artillery tower first and foremost, the crew disembarked and manned the gun on the field. Between the transverally mounted engine three radiators were installed, and behind took place an additional storage bin in three modules. It was intended to store ammunitions. The vehicle also had two side storage bins, which further reduced the size of the inner crew compartment. This choice, as well as the eight of the vehicle, made it difficult to access and exit. Steps were placed under the side skirts to help access. It should be noted than the seventh foldable extra seat was placed above the transmission tunnel, so forcing leg spreading.

The vehicle was armored, but figures are not known and related to the Universal Carrier: 6-7 mm (0.25-29 in) flat plates to stop standard rounds, all around. The front plate mght have been thicker, and was sloped in two sections, upper and lower, adding atificial thickness. Extra protection came on each side from the storage bins. NBC protection was out of question and to protect the crew in bad weather, the vehicle was given an overhead bed frame to install a tarpaulin. Since it was first and foremost a towing vehicle, there was no fixed armament contrary to its predecessor. The front glacis was a simple armor piece fitted with hooks to store spare roadwheels (also adding protection). The glacis ended with a vertical plate in which were placed two sights, one for the driver, and the commander. The inner compartment was tall enough for the crew's helmets to barely show up. They were not protected from shrapnells, but with their mandatory helmet. The vehicle had been at least tested carrying a 106 mm recoiless rifle and a mortar in operations.

The Cadillac-powered prototype was ready in late 1944, production started in 1946, to be quickly terminated (at least 20 on the planned 400), succeeded by the CT25 with a Rolls-Royce engine. It's production took over quickly while the Vickers CT26 also started. Exact production numbers ar allegedly

The Oxford definitely didn't see service in WW2, delays pushed its production past the end of the war. The Oxford however served in Korea, as well as at home. Some were used by the BAOR. They were used as intended and sometimes as do-it-all light towing vehicles, showing in the photo for example, heping two Jeeps to ford a river. According to a photo, it participated to Operation Musketeer as well (The Suez campaign). It is shown with some men of the anti-tank platoon of 1 Royal Berkshires in November 1956, fitted with a US 106mm recoilless gun.

One (T352713), was captured by the Chinese. Another (Oxford T352791) shown a vehicle carrying a transversely placed 3inch mortar carriers. Oxford were supossed to be scrapped, straight from reserve stocks in the 1960s but there is simply no listing. Some were retreived later and one is possessed by a private collectioner, Bill Banister in the UK. One is in Bovington, another is on display next to other wrecked combat vehicles in North Korea, at the "Victorious Fatherland Liberation War Museum" in Pyongyang.

Test vehicle (no markings) with a tarpaulin

Oxford Carrier in an active unit in UK, 1950s 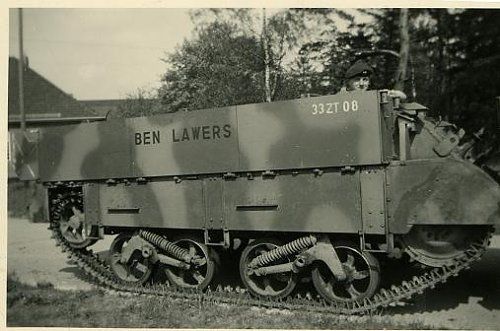 Catpured Oxford Carrier in China, with the allies markings

Oxford in Germany, towing a 17 pdr AT gun