"The Sd.Kfz. 254 was a German fully tracked armoured scout car planned in 1936. It was as the "RR-7" by Saurer (Austria), as an artillery tractor first, and for the Austrian army. Tested in 1937 it was approved for production in 1938, but only 12 were out of the factory Austria was occupied (Anschluss). The German took interest of this vehicles and started to relaunched the production for their own needs, after some minor modifications by the Waffenamt. Factory records established that 140 units were delivered, under the designation "RK-7" for "Räder-Kettenfahrgestell". The waffenamt later attributed the Sd.Kfz. 254 special vehicle designation. This wheel-cum-track armoured vehicle was unique among the axis and its diesel motor ensured long range. They saw action in the Afrika Korps, used as artillery observation vehicles due to their excellent mobility on all terrain, fitted with a radio.

Around 1930, intensive work was carried out in Germany on the development of new military vehicles mobility solutions. The Heereswaffenamt studied verious development path and found the solution of a lowerable crawler drive between the front and rear axles was a good direction to take. In this design, the track was wrapped around the front and rear wheels, and needed to be so by hand, which was hard and time-consuming. The improved concept type MSZ 201 was designed and built as a prototype by J.A. Maffei AG. It was tested, approved and procured to the Reichswehr, 24 pressed into service as personnel carriers. One of these was later sold to the Austrian Armed Forces. The latter tested it and found the concept interesting.

Maffei AG also developed an improved wheel-chain tractor (called the R.K. Schlepper) with had a fully-fledged chain drive between axles. It was permanent but could be lowered electrically, and the wheels raised at the same time. Three prototypes were examined in Kummersdorf, the German tank and special purpose vehicles test center. The results were quite good for the first prototype, but a improvements paths were soon indentified. The half-track design was modified and improved, and it appear the last modifications made this a less complex system, therefore chaper, easier to maintain and more reliable.

The developments in Germany were closely followed in Austria. Here, the Austrian armed forces had different requirements than the armored corps, and it was less about speed than excellent mobility for artillery and troops. Austro-Daimler and Saurer both were tasked to developed their own vehicle, based on the German concept. The Austrians did not wanted to purchase the German model, as required by the limited budget of the armed forces. In 1935, the type RR-6 was first presented to an evaluation commission. It was smaller than the German prototype and was suitable as a chassis for lightly armored vehicles as well.It was propelled by a 4-cylinder Saurer diesel engine rated for 70 hp, allowing to reach 60 km/h on flat on wheels, and 40 km/h off-road on tracks, which was really good for the time. Development work went on in 1936 and new tests were made until 1937. Eventually the army liked the RR-6 and ordered 160 vehicles. However, the next year as production was just getting started, Austria was annexed and occupied by the German Reich. The Wehrmacht took over the 5 prototypes and 15 series vehicles, all unarmored, which were assigned to repair units. They setup a request after testing for standardization with the other vehicles f the Wehrmacht and tailored the model for their own needs. 140 more were built from 1940 under a new design, that of an armored staff and observation vehicle. Daimler-Benz of Berlin-Marienfelde only manufactured 129 vehicles of this type as the Wehrmacht already had the arguably better and cheaper Sd.Kfz. 253 and 250/5 for these roles.

The hull was rather short and stubby, with sloped armour to gain advantage of the thin plates. Visibility was poor, limited for the driver, which was seated to the left, to a single foldable armored shutter with a sight slit in the middle. There was also another one on the left side. The engine was mounted as the transmission at the front, to free the aft compartment, which was not open top but enclosed, unusual for an observation vehicle, but fitted with side observation shutters. The engine could be accessed through a two-fold hatch on the hood. The commander was seated behind the driver, in the main observation compartment/radio room. He could stand up to the waist in his two-fold rotatable round hatch. There is also a two-piece hatch at the rear of the roof. Outside the bed frame antenna fixed over the roof, these was a right-side whip antenna. Access in the vehicle was done by a bak-plate right side door. There was an additional shutter in it, and pistol ports left and right. An access trap was provided on the left side, on the inwards slope, while the right side front part of the engine was protected by a flat armor protecting the exhaust sortie. Its pipe was running to the back at the level of the inwards slope. Tooling was installed on the left side as well.

The vehicle relied in a front-mounted Saurer CRDv 4cyl, diesel rated for 70 PS, activating the front drive sprocket. The narrow double pin track was linked to a rear idler, and six single roadwheels suspended by horizontal coil spring, like on Japanese tanks. The tracks were supported by three return rollers. The secnd wheeltrain comprised four road wheels, with a foldable two-stage suspension system, acting as folding arms. The suspension allowed the roadwheels to be forced down, and maintained in place while allowing some movement, and then folded up by depressing the suspension system. The track system was caracterized by a rather long overhand aft. Performances wise, the Sd Kfz 254 could reach 500 km on wheels, probably 250-300 on tracks, and reach a top speed of 60 km/h on wheels and on road, down to 40 kph on flat and tracks, down to around 25-30 in all-terrain configuration.

It was limited to a defensive pintle-mounted Rheinmetall MG34 7.92 mm machine gun, mounted on the pin on the right side of the hull, but if necessary it can be moved to any other place. Ammunition gun consisted of 2000 rounds. It was rarely visible on photos and by default, and otherwide, self-defense was limited to the personal weapons of the crew. However, variants were tested with tanks turrets. The closest to be converted used a twin MG Panzer-I stock turret.

With sloped armour, it was capable of resisting shrapnell as well as small arms fire, up to autocannon fire on the frontal arc; Indeed, the front was protected by 15 mm of armour (0.6 in), moderately sloped, while the side, rear and presumably roof were armored by 6 mm plates (0.25 in).

The early, unmodified and unarmored vehicles produced by Austria before the Anschluss found a place in repair units. The newly manufactured, German-standard Sd.Kfz.254 was fully armored and fitted with a single defensive MG, German radios. They were were used in motorized artillery regiments. From 1941, the Sd.Kfz.254 was used in various theaters of operations, notably the the Balkans, with the German Africa Corps and deployed for Operation Barbarossa on the eastern front.


In Rommel's 15th division, most were lost in action until late 1942. On the eastern front, they had better success, probably due to the engine not overheating as much. They survived until 1944, and some even after the war (see later).

The main design modification was to include a more powerful radio equipment. This comprised a FuG 4 and FuG 8, recognizable by the loop antenna. In other vehicles without that antenna, there was only the two meter rod antenna, foldable down, developed initually for the the FuSpr"f".

During the war, needs evolved and the vehicle was converted in new roles: At least two of them seen in photographs had a tank turret mounted: The RK-7 with a T-26 Model 31 turret and RK-7 with a Pz.Kpfw.I turret. The latter was found stable and lighter and was soon peferred for further conversions, buy they never took place. At the end of the Battle of El Alamein, the British managed to capture two damaged Sd.Kfz. 254, from the Artillery Regiment 33 (mot.) belonging to Rommel's 15th Panzer Division. One of the was sent to England to be tested, assessed and documented. The second vehicle was sent to the Americans for the same at the Aberdeen Proving Ground. It stayed there until the 1970s before returned to Germany as a good will gesture waiting for some time in a Bundeswehr depot to be restored.

The "freedom tank", became a famous vehicle after the war in 1950, when former mechanic Václav Uhlík from Líně in the Czech Republic repaired a derelict RK-7 artillery tractor, rebuilt as an armoured carrier. On 25 July 1953, he succesfully fled to the West, crossing three border zones by running over wire obstacles, thirty kilometres into West German territory. He applied for asylum and emigrated to the United States later, whereas his machine was exhibited as the "freedom tank", now owned by a private collector. SdKfz 254 in north Africa, with its wheeltrain removed for repairs or maintenance. src 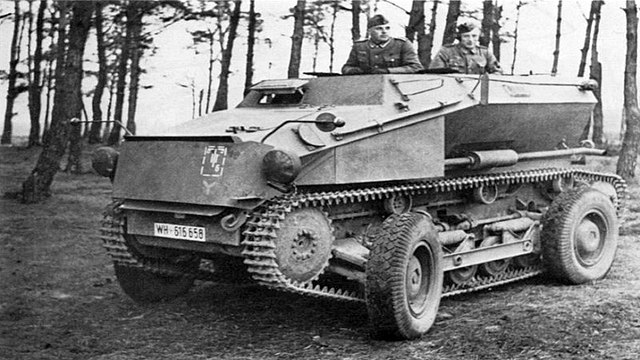 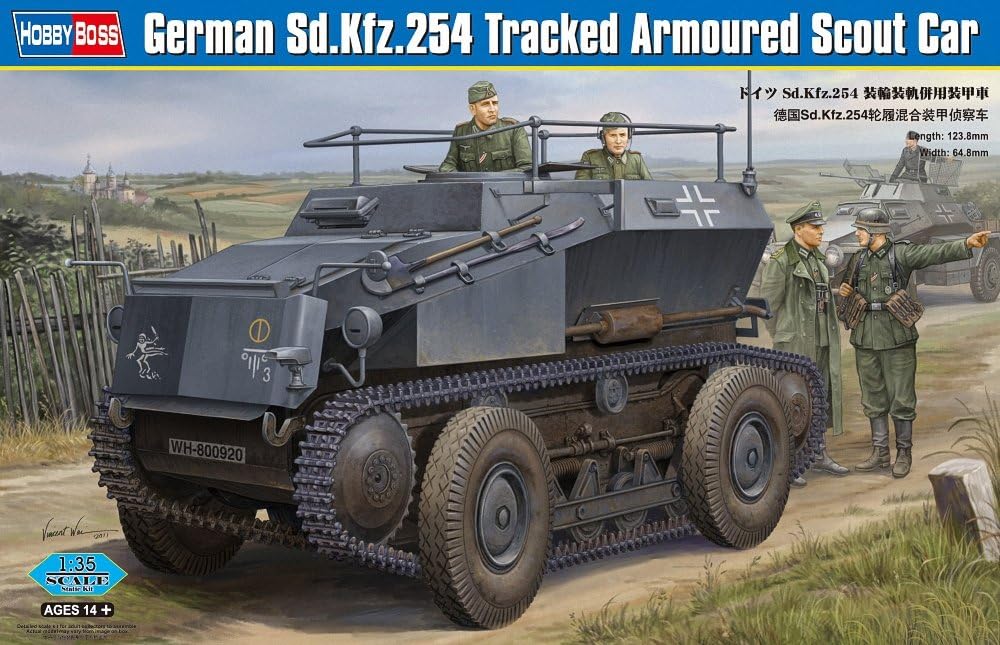