The VBCI is a modern style infantry fighting vehicle, with eight wheels and a modular construction, inspired by the MOWAG Piranha III. The first projects can be traced back to the nineties, when the successor of the AMX-10P was programmed to be developed. The VBCI entered service in 2008, with 630 vehicles produced until 2015. It equips all the units of the French army and has seen service in Afghanistan and Mali. Three variants have also been developed on the chassis.

In the early 90s, the French Ministry of Defense launched the VBM (Véhicule Blindé Modulaire / Modular Armored Vehicle) program. Other European countries had similar specifications and became interested, like England and Germany. In 1996, at Eurosatory, Renault unveiled its X8A 8x8 prototype for the VBM project. However, the negotiations became very complex and drawn out, leading the other interested countries to drop out. On the 6th of November 2000, the French government ordered 700 vehicles derived from the prototypes.

Tests (2003-2008) The long phase of testing and subsequent modification started. A new prototype was unveiled in 2003, which passed the mobility, agility, protection and electronic system reliability tests. Renault had already extensively tested the X8A demonstrator’s drivetrain and engine after 1996. Starting in 2004, 4 prototype VCIs and a VPC (Command vehicle) went through a battery of extensive tests in combat conditions, completing them in 2005. It was during these trials that problems with the DRAGAR turret (subsequently renamed Tarask) became apparent. The design was entirely rethought, which delayed the vehicle’s entry into service by two years. Other versions of the vehicle were drawn up in the meantime, notably a mortar carrier and an anti-tank version with a MILAN launcher. At the end of the project, the vehicle was also temporarily considered for the British FRS program.

Production Production started in 2008 with an order for 550 VCIs and 150 VPCs (the command version), but this was scaled down due to budget cuts to 510 and 120 respectively, giving a total of 630 vehicles by 2015. The total cost of the program was 3.49 billion euros. Each VCI cost 3.49 million euros, with the VPC at 2.74 million each ($US4.8-3.7m). If the development costs are integrated, it gives a cost of 5.5 million euros per vehicle ($US7.4m). This is significantly higher than the lighter American Stryker, which cost between US$4.9m (2012) and US$5.11m (2016) with inflation adjustments. However, the ten-fold larger production (4,900 vehicles) must also be taken into consideration when making such comparisons. 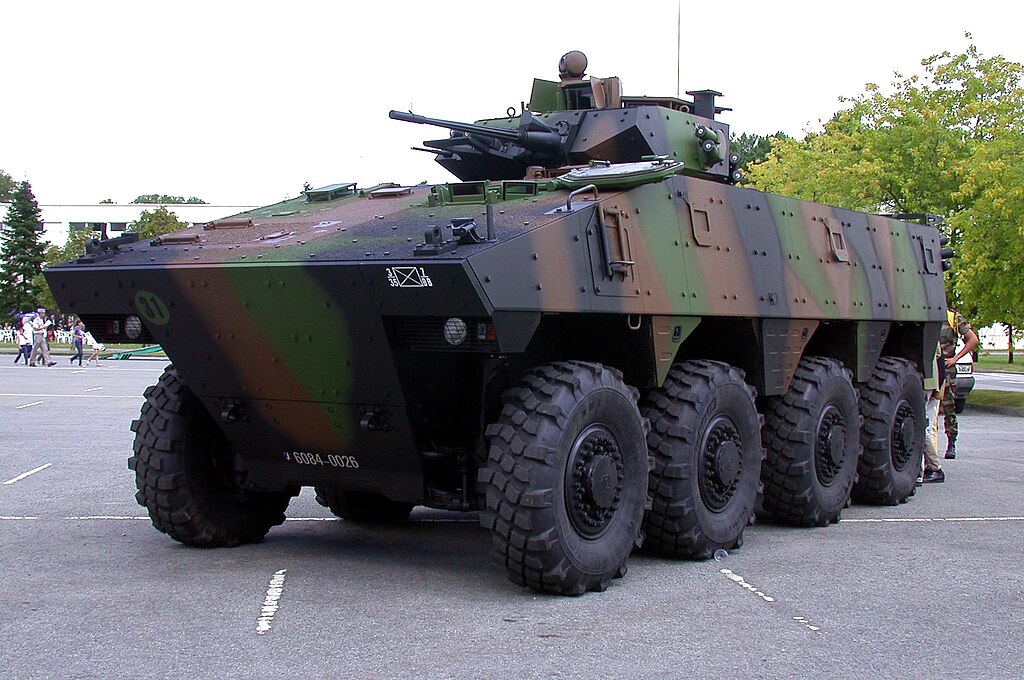 The VBCI seems like a tall and heavy vehicle when compared to other vehicles in the same category. It is far heavier than the Piranha III or LAV-25 (~13 tons) or even the Striker (18-20 tons). The VBCI was designed to be able to comfortably transport an infantry section. It had a crew of three, including the infantry commander, who also commanded the vehicle. The general configuration is classic, with the driver positioned in the front of the vehicle, on the left, with the commander behind him, while the engine compartment is on the right. Behind this is the fighting compartment, with the DRAGAR turret mounted centrally, and the infantry compartment at the rear. This is large enough for 9 men, eight of whom sit on side benches, facing each other. The infantrymen can enter and exit the vehicle through the rear doors.

The IFV version is armed with a 25 mm GIAT model M811 autocannon (with a rate of fire of 125 or 400 rounds/minute) and a coaxial 7.62 mm ANF1 machine-gun. Four Galix smoke launchers provide active protection and are also able to fire antipersonnel grenades. The APC version does away with the turret and the rear section is enlarged, in order to carry 14 fully-equipped infantrymen. The onboard armament consists of a 12.7 mm M2HB heavy machine-gun.

The gunner has an optical sight and a day and thermal camera for telemetry and fire-guidance purposes. He also has at his disposal a number of episcopes which allow him to observe a full 360° around the vehicle. The vehicle commander controls the Panoramic Observation Device (Moyen d’Observation Panoramique, MOP). The DRAGAR turret also has a gun stabilization system.

The hull of the VBCI is made of reinforced aluminum and welded steel. In its “naked” arrangement for air transport, the vehicle weighs 18 tons. Bolted applique armor can be added, increasing the protection to the STANAG 4569 level 4 standard, making it immune to calibers under 14.5 mm on the frontal arc and the sides. It was also protected against HEAT ammunition, mines and shrapnel. For active protection, the vehicle had four Galix launchers, with grenades being able to create smoke opaque to visible and infrared light. For threat detection, the vehicle has infrared devices and three rotating cameras, one of which was thermal. It also had a laser alert device, infrared decoys, and a combat identification device for the digital managing of the battlefield. The infantrymen were protected against mines due to the V-shaped underbelly with energy-absorbing deformation elements. The seats are also suspended, further reducing the effects of a mine explosion on the soldiers.

In addition, tests were carried out by Nexter and the DGA in 2013-2017 on a special camouflage, first presented at Eurosatory in 2014. Named “Cameleon”, it allows the reduction of the visible and infrared signature of the vehicle. It uses OLED light-emitting diodes and consists of a screen-like skin that can automatically change its color in accordance with the environment. It is planned to be implemented on the VBCI 2 and on many armored vehicles in 2019-2020. For urban combat in high-density areas, the vehicles should receive SHARK active protection.

The VBCI is powered by a Renault 500 hp turbo diesel engine derived from the Volvo D12. In order to optimize the behavior on different terrains, the hydropneumatic suspension can be adjusted on the go as well as when stopped. The VBCI also has a centralized tire inflation system which allows the lowering of the tire pressure on soft terrain. The engine can propel the vehicle up to a speed of 62.1 mph (100 km/h) on good roads, with a range of 466 miles (750 km). Off-road, the average speed can vary between 24.8 - 43.4 mph (40 - 70 km/h). The transmission consists of a ZF Ecomat 7HP 602 unit.

The trial results have shown that the VBCI can climb a 60% slope, handle a 30% side slope, pass over a 0.7 m obstacle, pass over a 2 m trench and ford a 1.2 m body of water without any preparation and a 1.5 m one with some preparations. However, more importantly, the VBCI is not amphibious. On the other hand, despite its weight (between 24 and 28 tons fully equipped, depending on the variant and optional equipment, but it can be stripped down to 18 tons for transport) and size, it is air transportable using an A400M Airbus or similarly sized aircraft. It's turning radius is between 17 and 22 m at slow speed. The VBCI also has an emergency steering system which consists of blocking the wheels on one side and turning almost on the spot. The eight tires are of the Michelin X-Force type, capable of traveling 62.1 miles (100 km) after being pierced by 5 bullets. The 8 wheel drive ensures maximum traction even if one wheel is destroyed by a mine. 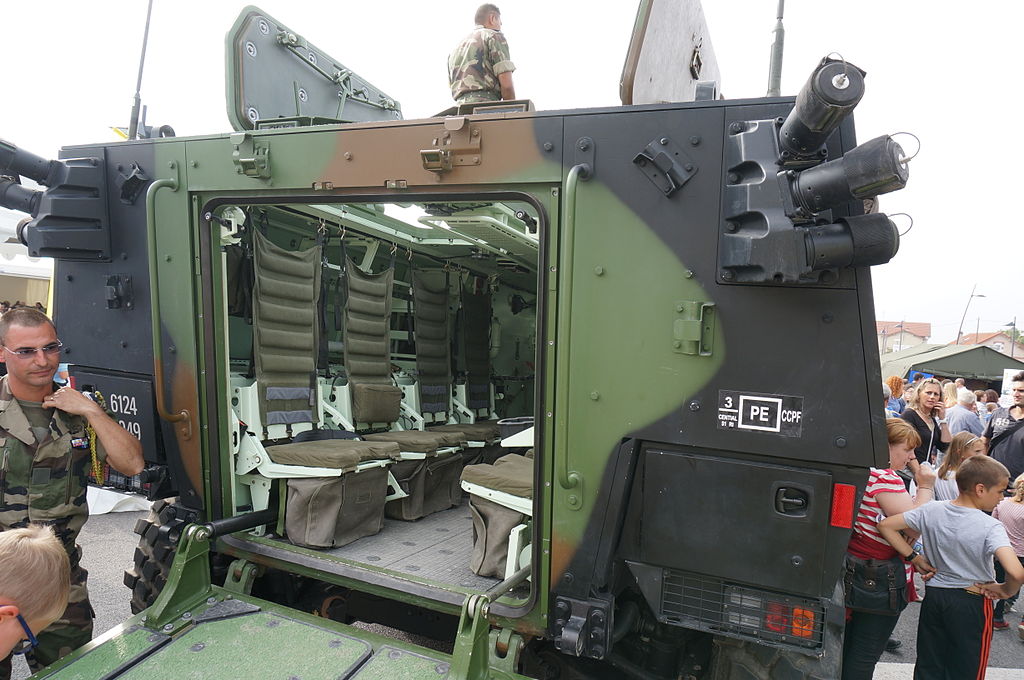 VPC: Command vehicle fitted with 2 radio stations, with a crew of 7 and mounting a 12.7 mm heavy machine-gun in a turret

C4ISR
These upgrades consist of the addition of the Information System Terminal (SIT, Système d’Information Terminal) on the VCI and the advanced Regimental Information System (SIR, Système d’Information Régimentaire) on the VPC command version. These real-time digital information systems are meant for troops using the FELIN (Infantryman with Integrated Equipment and Communications, Fantassin à Équipement et Liaisons Intégrés) augmented suite developed by Safran. VBCI 2 The VBCI 2 is estimated to weigh 32 tons, almost double compared to the Piranha III. Starting in 2015, this version tested the 40mm armed BAE/NEXTER CTAS turret (Cased Telescope Armament System), also planned to be used on Panhard’s future Griffon and the new British IFV, Ajax. The VBCI 2 integrates the lessons learned during combat in Mali, and has a new 600 hp Volvo drivetrain, a new air conditioning system and new 360° digital cameras which can be controlled and viewed from the 3 onboard consoles mounted for the vehicle commander, gunner, and driver. The hull is now made of reinforced aluminum, but the applique armor is very modular, being easily adapted to the mission conditions. Reinforced riveted steel or titanium plates can be effective against anti-tank projectiles up to 14.5 mm caliber. The basic version of the VBCI 2 has a T40 turret, derived from the export version of the VBCI, and a remote-controlled 7.62 mm machine-gun. The turret is also armed with a pair of anti-tank missiles in containers. For export purposes, the vehicle can also be fitted with a remote-controlled 30mm cannon or even the BMP-3 turret.

VBCI with add-on armour in Afghanistan

The VBCI in service

The first unit to receive the new vehicle was the 35th Belfort Infantry Regiment. Gradually, all the infantry units received their VCI and VPC vehicles, the last vehicle delivered being the 110th VPC, on the 8th of July 2013. Their first operation engagement took place in Afghanistan in May-June 2010, and then they saw action in Mali. They carried out convoy protection and infantry support missions and were thoroughly tested in combat, on many occasions taking out targets at more than 2,700 m.

In 2012, in Kapisa in Afghanistan, VBCIs equipped with cage armor were attacked with about fifteen RPG-7 rounds and two IEDs, but suffered little damage. One of the VBCIs which was hit was able to return to base, was repaired and set off again two hours later. After January 2013, the VBCIs of the 92nd Clermont-Ferrand Infantry Regiment were engaged in Mali, firing 1,250 rounds of 25 mm ammunition during their missions. This combat experience has pushed the DGA to request improvements from Nexter, notably survivability kits, active protection and improved vision devices and extra armor kits to protect against mines and IEDs. Renault Trucks Defense was in charge of modifying the running gears and the suspension in 2014-2015. These upgrades were also incorporated into the VBCI 2. Export: Negotiations are taking place with the United Arab Emirates (for 700 vehicles) and Qatar for the VBCI 2. Russia studied the VBCI in 2012 as part of its Boomerang program. The VBCI was also proposed to and rejected by Canada (2013), Spain (2008), Lebanon (2014) and, recently, Denmark. Several VBCIs were lent to the British army for evaluations in 2014. The French Army Ministry proposed buying the Watchkeeper WK450 drone in exchange for the British ordering the VBCI as part of its Mechanised Infantry Vehicle program. This program is not yet finished, the Piranha V being preferred as a development basis.


Video in operations by TheAxelino006